Syngnathia is a rare anomaly that involves fusion between the maxilla and the mandible. The fusion may be due to adhesions of the soft tissue between the bony fusion between maxilla and mandible. The latter is a very rare incongruity. These children present in the neonatal period with difficulties in the airway protection and feeding problems. Surgical management involves break down of the adhesions in the first few days of life. The prognosis is generally favorable.

Congenital craniofacial defect encompass 20% of congenital birth defects [1]. The defects of the fusion can present in a severity from single mucosal band (synechiae) to complete bony fusion (Syngnathia) [2]. Congenital maxilla-mandibular syngnathia, (fusion of the jaws), is a rare condition that has a broad spectrum of presentations [3]. The constrained opening of the mouth can lead to difficulties with feeding, swallowing, and respiration resulting in failure to thrive [4]. Early recognition and treatment is necessary for proper growth and development. Congenital bony fusion of the mandible and maxilla without any other oral incongruities is a very rare condition [5]. Numerous cases with other anomalies like cleft lip, cleft palate, aglossia have been described. Syngnathia can also occur with syndromes (Vander Woude, popliteal pterygium) and other congenital anomalies such as those which involve central nervous system, that cause mental retardation or the cardiac system, which manifest as the outcome of patent ductus arteriosus and tetralogy [6]; or the skeletal system, which include hemi vertebrae and fused ribs, feet syndactyly, and hand brachydactyly. Cases may also have associated anomalies affecting the endocrinal systems, including type I diabetes mellitus, hypothyroidism, and the reproductive system anamolies, such as micropenis or hypospadias. In cases of bilateral fusion between both jaws, the craniofacial structure anomalies are rarely observed. In 1997, Dawson et al. [5] classified syngnathia into type 1 (simple syngnathia), bony fusion between mandible and maxilla or the zygoma in the absence of other congenital anomalies in the head and neck; and type 2 (complex syngnathia), syngnathia occurring with other congenital anomalies in the head and neck. Furthermore, the type 2 syngnathia was further classified as type 2a syngnathia (syngnathia with aglossia) and type 2b syngnathia (syngnathia with agenesis or hypoplasia of the proximal mandible) [7].

Our report presents two very rare cases of syngnathia running in a family. The elder child has left side syngnathia and the younger one has right sided syngnaathia These cases were represented as unilateral fusion between the mandible and maxilla unusually with no other intra-oral or systemic anomalies. The elder patient with left side syngnathia successfully underwent surgical procedures, allowing the patient to open her mouth [7].

Pathogenesis is related to a developmental defect in the first brachial arch, where separation of the maxilla and mandible fails to occur in the embryonic development during the 7th to 8th week. The causative factors that contribute this condition are supposed to be genetic, teratogenic, and mechanical insults. Trauma late in pregnancy, the presence of an abnormal stapedial artery, and teratogenic agents have been suggested to be additional causative factors. Persistence of the bucco-pharyngeal membrane, amniotic constriction bands in the region of development of brachial arches, environmental insults with medicines and large doses of vitamin A have been postulated as other possible reasons.

A 4-month-old baby girl, weighing 4 kg. was referred to the Department of Plastic Surgery, from Department of dental surgery of Government Dental Hospital, with a complaint of the baby’s inability to open the mouth and feed since the time she was born. The baby was born to consanguineous parents (Primigravida; delivery via Caesarean section) with a full term uneventful pregnancy, at a private nursing home. Evidently the baby did not cry following birth. The Apgar status of the baby was not known; however, her antenatal history was normal. There was no positive history of polyhydroaminos, oligohydroaminos, and/or pregnancyinduced hypertension with iron or folic acid deficiency; fever; or any exposure to radiation. Clinically, fusion of the upper and lower gums on left side was noted, on examination, the baby had normal features. On intra oral examination, there was no demonstrable mobility of the lower jaw, and a partial fusion of the left maxillary and mandibular gum pads was seen in left side of the mouth. A provisional diagnosis of left maxilla-mandibular fusion was made (Figures 1 & 2). 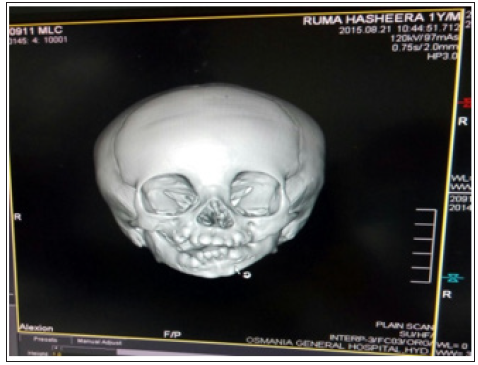 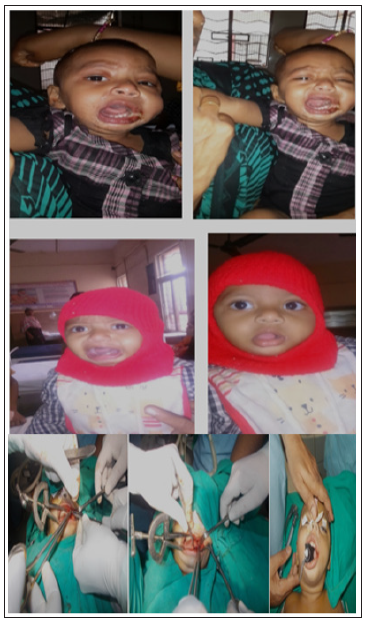 Synechiae are adhesions between anatomic structures. Syngnathia has been reported in association with cleft lip, cleft palate, aglossia, oral soft tissue synechiae, hypoplasia of-proximalmandible. Congenital bony fusion can be clinically recognized and diagnosed. Conventional radiography and high resolution or spiral CT can support the diagnosis. Syngnathia interferes with feeding, breathing, growth, development and induction of anesthesia. However, based on literature on isolated syngnathia functional results are likely to be good. Airway is the first priority to be secured in the management, thereafter feeds should be cared for by nasogastric. Fiber optic nasotracheal intubation under spontaneous ventilation using low doses of ketamine offers a safe and non-invasive technique compared with tracheostomy or blind nasotracheal intubation [8]. Surgical division of bony fusion under general anesthesia is the optimal treatment in all types of syngnathia and is to be followed by physical therapy. Complete mouth opening may not be possible immediately after the surgical procedure and it may take 1-2 weeks post operatively. When treatment for this fusion is not undertaken early or in long standing cases growth anomalies from temporo-mandibular joint ankylosis may occur [9].

In conclusion, operative management of syngnathia should not be delayed. Surgical intervention, particularly in the absence of major anomalies, should be performed during the neonatal period. The patient was operated at 18 months of age despite of repeated counseling to the parents from the age of 4 months; parents were unwilling to get the operation done, their apprehensive nature led to the delay in procedure. Close follow-up, daily mouth-opening exercises, for a few weeks were helpful to avoid reunion.