The Merriam-Webster’s Collegiate Dictionary defines museum as “an institution devoted to the procurement, care, study, and display of objects of lasting interest or value” as well as “a place where objects are exhibited.” To this end, the present paper deals with that of the Royal College of Surgeons of England, although it seems to be obtainable by even an individual

The Merriam-Webster’s Collegiate Dictionary eminently defines the museum as “an institution devoted to the procurement, care, study, and display of objects of lasting interest or value” as well as “a place where objects are exhibited” [1]. It seems that an individual may even own it, seeing that Edward Seymour [2] revealed that “In the collection of preparations of morbid parts in the possession of Mr. Brodie, there is a specimen of the fungus hæmatodes of the liver (tubera diffuse), scirrhus of the breast, and a disease of the uterus …” In this context, it is of interest that England was mentioned when tracing the source of inspiration for the development of collections which grew as Harvard’s Famous Warren Anatomical Museum [3]. Accordingly, having been opportuned to receive precious information from the Librarian of the Royal College of Surgeons of England, when I wrote on 30th November, 2009 [4], concerning a photocopied Journal material devoid of both name and date, let me provide historical highlights of its Museum in chronological order.

a. 1834 – Robert Graves [5], King’s Professor of The Institutes of Medicine in Dublin, mentioned “A rare specimen of diseased lung, presented to the museum of the Royal College of Surgeons by the late professor Todd, but of which no history was procured, as the individual, the subject of it, was in a dying state when brought into hospital.” In addition, he continued thus: “I may conclude with observing, that one half of Keating’s diseased lung is preserved in the museum of the College of Surgeons, and the other in the museum at Park-street.

b. 1846 – William Walshe [6] included “a series of specimens” in the museum, emphasizing that they “illustrate every stage of the transition, from the simple cyst, to the cyst so filled with gland substance as to form a solid tumour,– the chronic mammary, or mammary glandular tumour.” Also mentioned were “Nos. 2796, and others in the College Museum.” Other citations were in respect of Nos. 3082-3-3, 3267-8, and “many others, illustrate these points.”

c. 1847 – William Lawrence [7] was the President of the Royal College of Surgeons when he delivered a Clinical Lecture on Organic Diseases of the Eyeball at St. Bartholomew’s Hospital. In particular, Case IV was introduced as “I now exhibit to you from the museum.” Then, he continued that “The condition of the heart, which is now before you, is thus described in the Catalogue.” Furthermore, it is of interest that he also cited a Journal article with both volume and page.

d. 1855 – James Paget [8], while including an example from the museum of St. Bartholomew’s Hospital, added that “The left lung is in the museum of the College of Surgeons.” Incidentally, the case led him to actually theorize on the modern issue of transpulmonary passage of cancer cells!

e. 1883 – Eve [9], who doubled as the Erasmus Wilson Lecturer and Pathological Curator of the Museum of the College, delivered a Lecture at the College. During it, he repeatedly exemplified with such Nos as 4790a, 4785a, 4786a, and 4785b and encompassed materials from the Transactions of the Pathological Society of London. As he put it, “The glandular structure of cancer is most beautifully shown in cancers of the thyroid gland and of the large intestine.”

f. 1883 – Lawson Tait [10], who was based in the Midlands, but was FRCS ENG, had occasion to recount his 180 consecutive cases of abdominal section. However, he lamented thus:There must be hundreds of women suffering in this way in London, but I have as yet heard of no operation of the kind having been performed there. A large number of my preparations are in the College of Surgeons’ Museum, and I have read papers on the subject at the London societies; but the first recognition of my work has come from America. In September last, Dr. Emmett of New York paid me a visit and saw some of my cases, and on his reporting what he saw, my example at once had an influence. He took away with him some of my specimens, and on December 21st Dr. T. Gaillard Thomas reported to the New York Academy of Medicine four cases of the kind I am now discussing – tubular cyst with diseased ovaries.

g. 1891 – Bland Sutton [11] was also a Hunterian Professor of the College. As it turned out, his contribution was distinguished by containing (Figures 1 & 2) which are reproduced here nicely. His case of regression was included as follows: 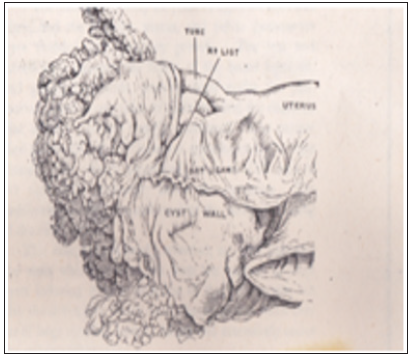 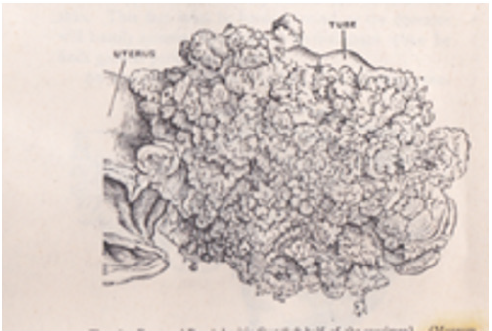 It has been clearly established that when the abdomen has been opened for the removal of a papillomatous cyst, the peritoneum has been found studded with warts. A few years later the abdomen has been re-opened, and all the peritoneal warts have disappeared. Thus, they behave like warts on the skin. This fact must be borne in mind, or the operator will hastily assume the disease to be malignant when he finds general peritoneal infection.

Some recent writers on medical history did not mention the role of museums [12,13]. However, William Rothstein [14] made the point that “Previously, pathology in medical schools had been taught by clinicians or by full-time pathologists who had little or no knowledge of cellular pathology and who were primarily curators of museums of pathological specimens.” In this context, it is well to consider current information on this aspect of learning. For example, there is The Educational Museum of Modern Medicine in Japan [15]. Its experience has been general towards independent learning in a fruitful way. Concerning Malabar Medical College, pathology museum session proved to be a powerful teaching method [16]. As regards Leiden University, all students were found to have found audio-guided museum tours to be useful for learning [17]. 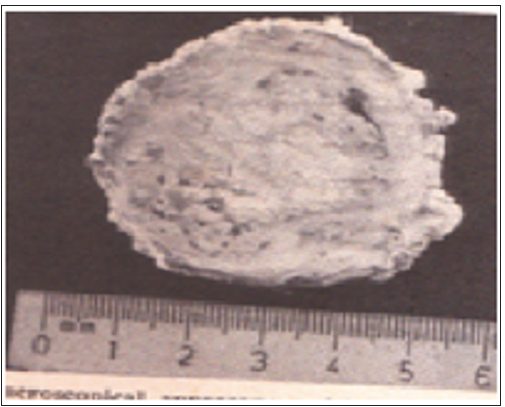 It may be concluded with personal experience in this developing community. Now, obtaining autopsy specimens can be difficult. Therefore, biopsy specimens, which range from the gross to the grotesque, provided the answer. In my Doctoral Thesis [18], (Figure 3). illustrated the curious “hip stone,” i.e., tumoral calcinosis. Indeed, with regard to the Reference Regional Laboratory at Enugu, the author’s collections derived therefrom have been used to feed the Museums of the new Medical Schools at Nnewi, Abakaliki, Abia, and Awka. No doubt, the succeeding years will blossom with more local additions from the up and coming pathologists.