A 63-year-old woman presented to our hospital due to fever, chillness, decreased appetite and vague epigastric pain for 3 days after returning from Netherland for sightseeing. Laboratory examination demonstrated leukocytosis, and sonography of the liver disclosed an irregular cystic lesion within the segment IV of the liver. Owing to progressive pain and persistent fever, she was referred for computed tomography (CT) scan under the diagnosis of hepatic abscess. The composed CT scan demonstrated an abscess measuring 4.3 x 2.7cm within the segment IV of the liver, in association with a foreign body measuring 2.8cm impaling from peripyloric area of the stomach (Figures 1 & 2). There was remarkable fibrotic tissue around the foreign body and space between the two impaled organs. She could not recall any episodes of fever or sharp abdominal pain during the last few weeks. Regard to the CT images, the foreign body already migrated through the gastric mucosa that endoscopic removal is not feasible. She underwent laparoscopic exploration thereafter. Marked adhesion and fibrosis between the liver and the pyloric area of the stomach was found (Figure 3A), which compatible with the preoperative CT images. The foreign body, which was a fishbone, was removed after meticulous dissection along the fibrotic tissue (Figure 3B), and the impaled site on the stomach was repaired with interrupted sutures and omentum patch (Figure 3C). Concerning the spillage of abscess into peritoneal cavity by concomitant surgical drainage, we applied a pigtail into the abscess via percutaneous fashion (Figure 3D). The bacterial culture from the abscess yielded Klebsiella pneumonia, Streptococcus anginosus, and Actinomyces odontolyticus, which were eradicated by targeted antibiotics for 5 days. She resumed oral intake since postoperative day 5 and was discharged on postoperative day 8 after removal of the drainage for the abscess.

Figure 1: Abdominal CT findings. The composed CT scan demonstrated the whole path of the foreign body between the abscess within the segment IV of the liver and the stomach in recombinant coronal and sagittal views.

A. Part of the omentum and the pylorus of stomach adhered to the liver.

B. The fishbone was retrieved after meticulous dissection along the tract formed by fibrotic tissues.

D. CT-guided drainage of the abscess by a pigtail catheter. 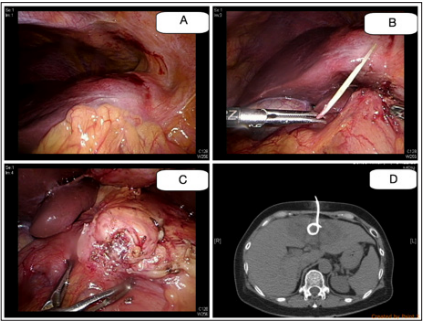 Most of the ingested foreign bodies pass through GI tract spontaneously, while some of them mandate intervention [5]. Surgery is warranted for foreign body related perforation with immediate peritonitis or obstruction. Hepatic abscess secondary to perforation of stomach induced by foreign body is a specific disease entity, owing to its rarity and obscure clinical presentations [4]. The peristaltic waves pushed the sharp foreign bodies through the stomach, presumably the antrum, and resulted into gradual penetration that permit enough time for the omentum to wrapped around [6]. The foreign body impales the adjacent liver and resulted into secondary hepatic abscess. Among the reported patients [2], most of them could not recall the time of ingestion and the type of foreign body. The clinical manifestations of hepatic abscess include fever, chillness, or right upper quadrant pain, which were not specific to achieve the diagnosis. Therefore, the diagnosis of hepatic abscess resulted from foreign body which prompt adequate intervention relied on awareness of physicians and accurate image acquisition. CT scan is the preferred modality for its ability to demonstrate linear calcified structures [7].

Regard to our patient, the diagnosis was achieved after CT illustrated the straight and calcified fishbone between the liver abscess and the stomach. Stemming from the precise preoperative images, though lack of definite history, the fishbone could be removed via totally laparoscopic approach. Operative drainage contained one of the traditional treatment for hepatic abscess, which associated with high surgical morbidities [8]. The drainage method evolved with time and nowadays the majority of patients underwent image-guided percutaneous drainage with remarkable successful rates since 1990s [9,10]. Some authors also proposed drainage of hepatic abscess laparoscopically [11]; however, it remains an alternative modality in selected cases and when percutaneous approaches fail. In conclusion, the reported case achieved the diagnosed as foreign body induced hepatic abscess on CT images, which mandated both the foreign body and the hepatic abscess be managed in minimal invasive fashions successfully.