Virtual Reality (VR) is an often-used instrument in many domains, also in sports. Therefore, it can be used for training with skilled athletes. The current short review highlights existing virtual environments (VE) which were used for interventions and shows that most training interventions using VR in sports were conducted with beginners. Thus, training studies with skilled athletes are rare. In the discussion, the present review shows one the one hand open questions concerning training using immersive VR, and one the other hand further possibilities to use such VEs for training in sports.

Virtual Reality (VR) can be used to create a realistic training with standardized, controllable and stereoscopic conditions. By the use of VR, manipulations can be made which are either difficult to perform or not possible in real world settings. Furthermore, standalone trainings can be made. Thus, there would be no dependence on training partners, coaches or gyms Petri et al. [1,2]. Nowadays there exist several forms of virtual characters which can replace opponents Petri et al. [1], auditory Argelaguet Sanz [3] or coaches de Kok et al. [4]. These characters can act autonomously by some kind of artificial intelligence (e.g. decision systems or prediction systems), so the movements and positions of the real athlete can be taken into account. The character can interact with the real athletes by movement executions (e.g. executions of attacks against the athlete) or language (e.g. feedback for real-time corrections in motor learning). Furthermore, the training conditions in VR can be safer than in reality due to missing collisions with real opponents or teammates Miles et al. [1,5].

There exist many virtual environments (VEs) in sports (for further detail see Petri et al. [6], but only a few studies which conducted and analyzed a training intervention in immersive VR. In most cases, these few training studies included only beginners. Thus, training studies with skilled athletes are rare (Table 1). In an own conducted study (unpublished), a training with youth skilled karate athletes was performed to improve their response behavior. In ten training sessions (à 10-15 minutes) 15 athletes had to respond sports specifically to upcoming attacks from a virtual opponent. It showed that this kind of training led to significant improvements in the time for response (time between the beginning of the attack and the first measured response), the response quality (scoring system to detect the performance) and the kind of response (blocking technique and counter attack or direct attack). In particular, the time for response became significantly shorter, the response quality improved and the kind of response changed from block and counter movements at the pretest to direct attacks at the posttest. 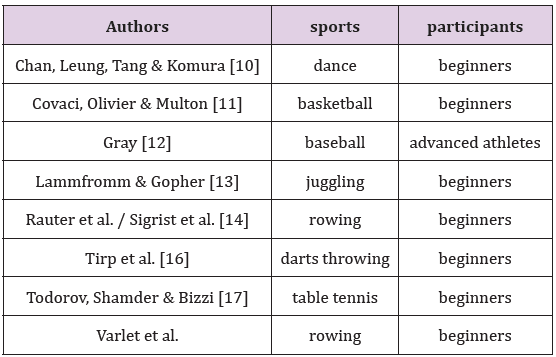 However, there are still several open questions concerning VR. Today there is a lack of concrete recommendations for training execution and implementation of feedback in VR. Also transfer studies are missing confirming that a training in VR leads to improvements in reality. Furthermore, there are no safety standards Miles et al. [5]. Especially when using Head Mounted Displays (HMDs), which separate the real from the virtual world, it would be necessary to visualize the athlete’s body. Unfortunately, concerning the body visualization and also familiarization times in HMDs, there exist no concrete recommendations or standards, as there are no standards for the creation and the look of virtual characters either Petri et al. [6]. Today, most VEs are only created for one user. It would be interesting to extend VEs for more users, which can also be at different places while they interact with each other. In this way, training, or even competitions can be made over larger distances.

VR can be used to perform stress training by the implementation of several stressors, such as hard opponents or loud auditory Argelaguet Sanz et al. [3]. Thus, such VEs can be interesting for a concrete preparation for competitions in order to learn how to deal with stress, or opponents can be created who act very similar to real future opponents. Furthermore, psychological trainings can be made to decrease stress and increase self-confidence by template of e.g. Marshall et al. [7]. Already Miles et al. [5] had the idea to use VR for tactical training, because VR is a useful tool for visualization. For example, paths of the ball, running paths from one-self, opponents and teammates can be shown from different perspectives. It is further possible to use VR in addition to the conventional training to teach some aspects. E.g. endurance training can be made by the use of an ergometer placed in VR, so that athletes have the feeling to perform their sports on real (future) running, cycling or rowing tracks and thus, can prepare for next competitions. Or strength exercises can be made with a coach who gives a real-time feedback for movement executions de Kok et al. [4].

Furthermore, mental skills, like anticipation can be trained so that athletes learn to search for relevant signals Farrow et al. [8-12]. Each VR training produces data which on the one hand could be used for one-self, but also for other athletes to improve performance. On the other hand, it is unsolved how to deal with such data. It is not clear, to whom these data belong and which persons they can be used from Düking, et al. [9]. Furthermore, it is possible to perform a mental training for karate athletes to improve their movement execution [12-17]. Therefore, an App for a smartphone can be created with which athletes can watch self-reliantly correct movement executions from highly skilled athletes. They can change the speed and the perspectives and can get further information concerning the movement executions. Then it can be analyzed if the own movement execution improves due to the training with that App. If this is the case, such a training would be a good and low-cost alternative for athletes (work in progress). Furthermore, injured athletes could use this App to bridge their normal training interruption Farrow et al. [8].