Development of Tuberculosis in Child During Treatment with Tumour Necrosis Factor-Alpha Inhibitor Agent: Could This Have Been Prevented? Volume 7 - Issue 1

Tumor necrosis factor alpha (TNF-α) is a pro-inflammatory cytokine that plays a critical role in the host response to tuberculosis (TB), having an essential role in the granuloma formation and maintenance of the latency of TB. Blocking TNF-α in cases of active infection with Mycobacterium tuberculosis (Mbt) results in a failure to form tight granuloma’s as well as disintegration of existing granulomas leading to mycobacterial dissemination in a murine model [1-2]. Treatment with anti- TNF-α agents has become an important cornerstone in the treatment of severe, non-remitting forms of juvenile idiopathic arthritis (JIA). However, patients treated with TNF-α inhibitors (in particular, monoclonal antibody preparations, such as infliximab and adalimumab) are at increased risk of reactivating latent tuberculosis infection (LTBI) of approximately two - to eightfold [3-5]. Screening for TB infection and TB disease, and appropriate treatment before commencing of anti-TNF therapy is therefore important [6-7]. Either tuberculin skin test (TST) or interferon-gamma releasing assays (IGRAs) or both, clinical symptom screen for TB disease, and chest radiograph (CXR) are commonly recommended screening tools by most guidelines [8]. Latvia is among five high TB incidence countries in European Union, with a total TB notification rate of 31,3/100 000 in 2015. According to the National Guidelines, all patients are screened for LTBI (TST or IGRA test or both) and TB disease (symptom screen and CXR) before starting treatment with anti- TNF-α agents. Here we report a case of TB which developed in child during treatment with adalimumab.

A nine-year-old male patient was hospitalized at children’s Clinical University Hospital on June 16, 2015 due to complaints of high temperature for two weeks, headache, abdominal distension, loss of weight, pain in the right hip, knee and ankle joints. The child was diagnosed with JIA, oligoarthritis, HLA B-27 negative at the age of 4 years in 2010. In February 2012 at the age of 6 years therapy with methotrexate 7-5mg once per week was started. Therapy was tolerated poorly, JIA progressed with involvement of multiple joints. On October 2014, at the age of 8 years treatment with adalimumab was commenced. Prior treatment screening for LTBI and TB disease was performed: T-SPOT. TB test (Oxford Immunotec, Abingdon, UK) was negative, CXR was normal. Since autumn 2014 the child had a non-troublesome recurrent cough. Consultation of rheumatologist on March 2015 did not reveal any respiratory pathology. 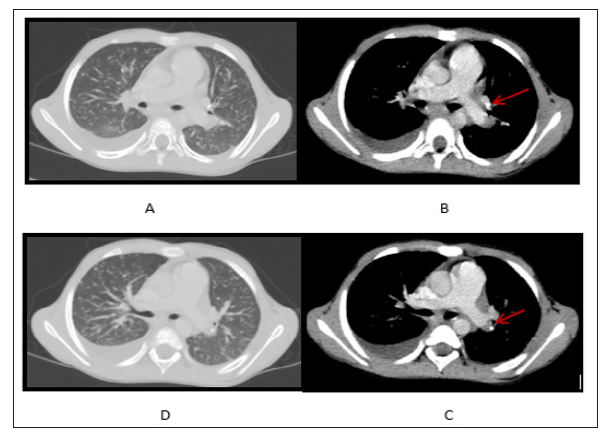 Our patient developed severe TB during 8 months of the treatment with adalimumab, despite the fact that LTBI and TB disease were excluded before therapy. Taking into account the densely calcified lymph nodes identified on CT, one can speculate, that TB infection was old, acquired in the past, and not diagnosed by conventional screening methods prior treatment with adalimumab. It has been shown that CXR can have low-sensitivity and specificity in detecting TB abnormalities. Chest CT is superior to CXR in the visualization of intrathoracic lymphadenopathy, mild parenchymal abnormality and early cavitation [9]. CT scans in addition to CXR revealed calcification in lymph nodes and lung parenchyma in 42% of children and adolescents diagnosed with TB in study by Ziemele et al [10]. Thought old calcified TB lesions are uniformly negative for culture and acid fast- staining, such lesions are frequently found in lungs in reactivation TB indicating their association with reactivation. In the study by Iida et al. [11], it was shown that old TB foci, particularly those exhibiting some calcification, all were negative for culture and acid-fast staining, however contained abundant Mbt components.

All of the calcified granulomatous lesions examined were positive by real-time PCR and contained granules with mycobacterial cell wall components, some of which had bacillus shape. Authors explained low sensitivity of microscopy and culture by low proliferation rate of Mbt and loss of acid-fastness in environmental stress conditions, and recognized, that the risk of reactivation of latent TB from calcified lesions should be considered, especially in patients who are immunocompromised. T-SPOT. TB test detects cellmediated IFN-γ responses to Mbt-specific antigens. Because the amount of Mbt is small in LTBI patients, diagnosis of this condition mainly depends on the immune response of the host rather than the bacteria itself Use of Methotrexate and chronic inflammatory disease itself could possibly reduce the sensitivity of T-SPOT.TB test during latency of TB infection in our patient [12].

The sensitivity of currently recommended screening tools for LTBI and TB disease was insufficient to reveal calcified lymph nodes which were likely the hotbeds of reactivation of Mbt infection. In children living in high TB incidence settings who receive immunosuppressive drugs and who are candidates for treatment with anti- TNF-α agents, consideration should be given for lung CT investigation after careful risk-benefit ratio consideration.