Conclusion: Older age, programme of study and marital status of health profession trainees were significantly associated with better awareness of contraceptive methods. The predictors of the use of contraceptives were being a male and being married

Increased use of contraceptives across the world had safeguarded the health of sexually active females since significant numbers of unintended pregnancies and subsequent abortions related deaths have been averted [1-6]. Contraception had also led to improvement of perinatal outcomes by a reduction in the number of babies born premature, low birth-weight or small for their gestational age thereby resulting in a reduction in infant mortality [7]. Other non-contraception importance of contraceptives includes a reduction of gynaecological cancers, menstruation related symptoms and disorders, sexually transmitted infections and improvement of socio-economic status of women [2,6]. According to the United Nations’ Department of Economic and Social Affairs – Population Division (UNPD)’s 2013 report, whereas global contraceptive prevalence is estimated at 63 percent, and more developed regions recording 72 per cent, majority of less developed regions scored 50 per cent or less [8]. Even worse are sub-Saharan African countries reporting exceptionally low contraceptive prevalence of below 30 percent among married or unmarried women between ages 15 and 49 [8]. High population growth rate as a result of low contraceptive use in poor developing countries is exerting severe social, economic and environmental pressures on the citizenry which invariably affects their health and wellbeing [6,9].

High contraceptive prevalence rate had contributed to the low birth rates recorded in developed countries so for developing countries who desire to have rapid economic growth, there would be the need for them to embark on strategies to encourage voluntary contraceptive use so as to reduce the high unmet needs for contraception [4,9]. Ghana’s National Population Council (NPC)’s population stabilization 2011 report indicated that Ghana’s population at the last census in 2010 was 24.2 million and with a population growth rate of 2.4 percent, the population would double by the year 2040 [10]. Like other sub-Saharan Africa countries, Ghana’s population structure is predominantly youthful, who are the most fertile class, hence there is a threat to the country’s future economic progress and development if greater efforts are not put in place to delay first sexual encounter and increase contraceptive use among the youth. The youthful and fertile section of the Ghanaian population need be encouraged to use contraceptives to reduce this high birth rate. In most sub-Saharan Africa countries, the most stated reasons for not using contraceptive has been the lack of knowledge about contraception, health concerns in relation to the side effects [11-13] as well as restrictive and unfriendly attitude of health providers [14].

First to be contacted by persons who wish to practice contraception are the health workers hence they must possess good knowledge on contraception to ensure they provide would-be users accurate information and also exhibit attitudes which will make acquisition, and continued usage of contraceptives more attractive. A study in Bangladesh by [15] showed that a health worker’s quality of care increased the likelihood of a woman starting contraception and not discontinuing [15]. Ghana’s low contraceptive prevalence rate of 25.6% and an unmet contraception gap of 35.3 % require that policy makers revise their methods of providing contraception to the population and adopt strategies that would ensure growth rate is reduced [16]. The health worker is therefore indispensable in the quest of a country to bridge that unmet contraception gap. Several studies have been conducted in Ghana among secondary school and university students which assessed students’ knowledge, attitude and use of contraceptives but there is no reported study among health profession trainees. The schools of Medicine and Health Sciences as well as Allied Health Sciences of the University for Development Studies in Tamale, Ghana, trains students who in the future would become doctors, nurses, midwives, health educators, as well as nutritionists; professionals who have roles in serving the contraception needs of Ghanaians through provision of accurate knowledge and counseling services. This study therefore assessed health profession trainees’ level of awareness of the various contraceptive methods, their level patronage as well as factors that influenced their awareness and patronage levels of the various contraceptives methods.

Data on the awareness and level of use of contraceptives among undergraduate students of the schools of Medicine and Health Sciences and Allied Health Sciences of the University for Development Studies was obtained through a cross sectional survey between March and April, 2015. The study programmes of the students were Medicine, Nursing, Midwifery, Health Science Education and Community Nutrition. Data was collected with a semi-structured questionnaire which was pretested among 20 students which ensured correction of ambiguous and inconsistent questions before it was administered for the actual data collection.

Prior approval for this study and the procedures were obtained from the Ethics Committee of the School of Medicine and Health Sciences of the University for Development Studies. Data was collected from participants only after they had verbally given a free and informed consent to take part in the study.

With the study population of students being 2029, the required return sample size without estimated response rate factor n1 (323) was calculated using the Cochran’s correction formula for categorical data;

n0 the required sample size (384) was calculated using the formula

based on the assumption that 50% of respondents possess good awareness level of contraception and also use contraceptives (p = 0.5), sampling error (d) being 5% (0.05), confidence interval of 95%, and normal distribution value (t) at a significant alpha level of 0.05 being 1.96. With an estimated response rate of 70%, a drawn sample size of 461

was considered for this study.

The number of respondents from any class in study programmes of Nursing, Midwifery, Community Nutrition, Health Science Education and Medicine was obtained using a proportionate sampling approach. In each class, the required number of respondents was randomly chosen from an envelope, containing pieces of paper which has the names and identity number of all members of the class printed on it. The respondents were drawn using the sampling with replacement method.

Data was entered into Microsoft Excel, and analyzed using Graph Pad Prism, Version 5.01 (GraphPad Software Inc., San Diego CA). Associations between respondents’ socio-demographic characteristics and their level of awareness of male and female contraceptive methods were assessed using the One-way ANOVA test. Independent t-test was used to assess the influence that sociodemographic characteristics of the respondents have on their usage of contraceptive methods. Statistical significance was assumed at p < 0.05 and at a confidence interval of 95%.

Table 1: Socio-demographic characteristics of the respondents.

Percentage less than 100 percent due to missing values.

Table 2: Level of usage of contraceptives among respondents. 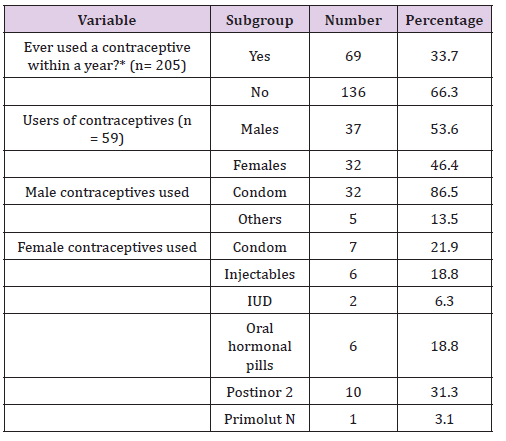 Table 4: Relationship between the socio-demographic characteristics of respondents and their level of awareness of contraceptive methods. 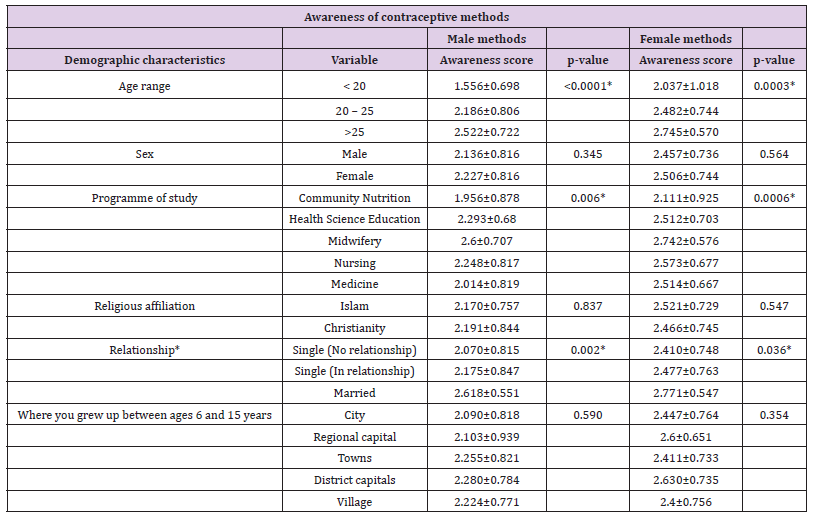 Table 5: Relationship between the respondents’ contraceptive use and their socio-demographic characteristics.

Table 6: Predictors of contraceptive use in students in the previous 12 months.

Meanwhile [23] in a study in Turkey found more females using contraceptives than males [23]. The male condom just as reported in several previous studies [17,20,23,24] was the most commonly used contraceptive among the males in this study who had used any form of contraception within the previous twelve months. The high patronage of male condoms could be attributable to various factors including the high level of advertisement of various brands of condom in the media in Ghana. Also, there is no sex education without any education on condom use as it is being widely promoted to manage the HIV/AIDS pandemic [25-26]. In the case of the female students, the emergency contraceptive pill, Levonorgestrel under the brand name, Postinor 2 was the most widely used contraceptive. The use of Postinor 2 should be of public health concern since it shows that in this study, most females who are sexually active were indulging in risky sexual intercourse which exposes them to sexually transmitted infections [27]. reported that the oral contraceptive pill was the most used contraceptive among female undergraduate students in University of New Hampshire [27].

Although the oral contraceptive pill was not the most used female contraceptive in this study; it was the best known just as reported in other studies in Nigeria [17,25-26]. In Ghana, the high level of advertisement of female contraceptives in the media and their availability in both private and public health facilities could account for the high knowledge about oral contraceptive pills [18]. The level of patronage of contraception among university students for males and females were 69.8% and 71.9% respectively in Turkey but 80.3% and 73.4% in Botswana [22-23]. The relatively higher average contraceptive usage of 33.7% recorded in this study which is more than the national contraceptive prevalence rate of 25.6% is encouraging. This higher than national average contraceptive usage among these health profession trainees could be due to greater knowledge they possess and a significant number of them also being married. According to the 2014 Ghana Health and Demographic Survey (GHDS) report published by the Ghana Statistical Service (2015) the median age of first sexual intercourse in Ghana for persons between 25 to 49 years were 19.8 and 18.4 years for men and women respectively [28]. Since 90.1% of students were above 20 years, it is mostly likely that a lot more than 69 (18.4%) may be sexually active. For barely 33.7% of even the married or those in relationship to admit using any form of contraceptive while colleague university students in Turkey and Bostwana had contraceptive patronage rate above 70% should be a matter of concern for administrator of universities in Ghana.

Getting to know students who were sexually active in this study was not possible because during piloting of the questionnaire, a question to know the age of sexual debut and sexuality status was not well answered hence its deletion from the final questionnaire. Another limitation that could affect the results obtained from this study is the use of self-administered questionnaire rather than interviewing which makes verification of the answers provided by the students difficult. Again, this study was undertaken among students of one of the campuses of the University for Development Studies. The results of this study cannot therefore be generalized for all university students in Ghana. This requires that a future study among students from all Ghanaian universities in the country so as to give a wider application of the findings. The strength of this study however was the application of a simple random sampling method in the selection of the study population which invariably minimized the biases in the selection of the students.