Purpose: Activated clotting time (ACT) is the mandatory for open heart surgery with cardiopulmonary bypass. Two monitoring systems, Hemochron and i-STAT, were applied for evaluation the difference between these two systems, and their variation.

Methods: Total 36 patients were recruited into the study, 18 for each groups. ACT was checked at 4 time points, before operation (T1), 5 minutes after heparin (T2), hypothermic status (T3), and 5 minutes after protamine reversal (T4). Comparing two groups, the ACT was shorter in i-STAT group at T1, T3, and T4. The ACT in same monitoring system did not show the difference whether live dysfunction or antiplatelet usage. However, the intragroup variation was found much steadier in i-STAT (R2 > 0.9 at 4 timepoints).

Conclusions: Two monitoring ACT system were reliable under cardiopulmonary bypass. Different systems may result results, that operators must realize. The i-STAT ACT may has less variations in different conditions.

Accurate control of the anticoagulation level is important for safe initiation of cardiopulmonary bypass. Activated clotting time (ACT) has been used to monitor heparin therapy in cardiovascular surgery to prevent thrombosis in extracorporeal circulation. It is first introduced in 1966 by Hattersley to measure the time required for whole blood samples to clot after contact activation.1 The most commonly used automatic method for ACT derivation is Hemochron 401 (ITC, International Technidyne Corp., Edison, NJ),which registers ACT in seconds by a mechanical device using celite, a diatomaceous earth, as activator. Though it is widely adopted in cardiovascular surgery and other intervention cardiologist laboratories, it has some weakness such as poor sensitivities, reproducibility, and the variability after heparin injection is large [1].

The i-STAT handheld monitoring system (i-STAT Corp., Princeton, New Jersey) was introduced for ACT measurement with different methods. The i-STAT determines ACT by the formation of thrombin rather than mechanical clot formation. It claims to have better consistency in different temperature, fibrinogen levels, dilution, and is technically easier [2]. Previous studies has shown that i-STAT and Hemochron has good correlation in percutaneous cardiovascular intervention, hemodialysis, and cardiovascular surgery using Factor Xa as an indicator for heparin level [2-3]. Thought heparin effect could be monitored adequately with ACT, studies had shown that ACT is resistant to platelet dysfunction and thrombocytopenia, and cardiopulmonary bypass is known to cause platelet consumption. The other limitations for perioperative ACT tests include artifactual prolongation of results with hemodilution or hypothermia, and lack of sensitivity at low heparin concentrations and poor reproducibility [4]. Thus, we did a comparison study to evaluate i-STAT and Hemocron in adult elective cardiovascular surgeries.

We recruited 36 patients who admitted for elective cardiovascular surgery with cardiopulmonary bypass between Jan. 2016 to Aug. 2015. We derived their medication through medical records. A total 288 duplicate i-STAT and Hemochron ACT measurements were obtained simultaneously from 36 samples in four different time points: after induction; 5 minutes after heparin injection; hypothermic status; 5 minutes after protamine reversal. Anesthesia was induced with etomidate, fentanyl, and rocuronium, and maintained with sevofluraine. Full anticoagulation was achieved with 300–400U/kg of porcinesodium heparin (Vister, Parke-Davis, Linate, Italy). All patients received an additional 5,000U of heparin in CPB primer. Heparin reversal with protamine was obtained by use of a heparin dose–response curve. In no patient was aprotinin or other antifibrinolytic drugs administered. All CPB procedures were performed under conditions of moderate hypothermia (29 to 32°C). Blood samples and ACT measurements were taken during theprocedures to achieve effective anticoagulation.

Sufficient blood (approximately 3 milliliters) was drawn fromthe arterial sheath to perform both a Hemochron and an i-STAT ACT for each patient. One person ran each test simultaneously. ACT measurements were done twice in i-STAT and Hemocron system. We averaged their ACT in seconds for analysis. The Hemochron machine uses a magnet inside glass specimen tubes containing celite. After blood is placed in the tubes, the tubes are rotated inside the instrument. As the blood clots, it displaces the magnet, thus activating a proximity switch. The clotting time is the time the clot takes to displace the magnet a given distance. The i-STAT analyzer system consists of a microprocessor-based analyzer that can use specific cartridges containing celite (celite-ACT test). Theendpoint of this method is indicated by the conversion of a thrombin substrate (inside the cartridge) other than fibrinogen. The time of detection is measured in seconds. For the Hemochron ACT, 2ml of fresh whole blood was dispensed into each of two celite-activated tubes, and the start button of the device was immediately depressed. Each tube was agitated 10 times by inversion (for approximately 10s) and placed at 37°C in the incubation well of the Hemochron ACT analyzers. For the i-STAT celite-ACT, a drop of fresh whole blood was put into each well of two i-STAT celite-ACT cartridges already inserted in the analyzers.All results are reported as mean and SD. Students’ t test was used to test the diffence of two measuring methods. Pearson’s correlation was used to assess the relationship between both Hemochron ACT and i-STAT ACT. One-way ANOVA was used for multiple groups comparison. A value of P < 0.05 was considered statistically significant.

Demographic and clinical conditions of the 36 inclusion patients were shown in Table 1. Five of our patients had platelet counts less than 100k/uL before surgery. Six of our patients had abnormal liver function test. One patient had chronic kidney disease, but none of the had dialysis therapy. Eight patients took aspirin and four patients took Plavix until surgery. Of them, 2 patients had dual therapy. Cardiopulmonary bypass duration was around 2 hours, and all the patients had blood loss less than 1000ml first day in the intensive care unit. No patient had additional surgeries for hemostasis.The absolute data and trend at different timepoints of i-stat and Hemocron was summarized in Figure 1. The data for i-stat is significantly shorter at baseline, at hypothermic status, and after protamine reversal. The standard deviation was more prominent after heparin injection and hypothermic status in either group. I-stat had better intra-rater reliability (Table 2). Overall, the correlation between i-stat and Hemocron was statistically realicable by Pearson’s examination (Table 3). We did subgroup analysis for platelet function and liver function. As shown in Tables 4 & 5 decreased platelet function and liver function lead to prolonged Hemacron or i-stat time before surgery and after protamine reversal. The difference was not significant after heparin injection. In hypothermic state, Hemacron was shorter in disease group, but not i-stat. 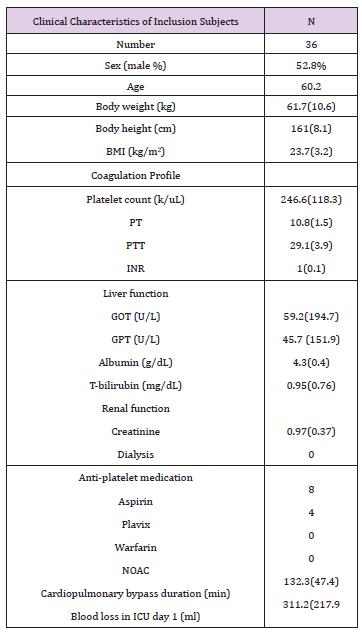 Table 3: Correlation between I-stat and Hemacron in Different Time Points. 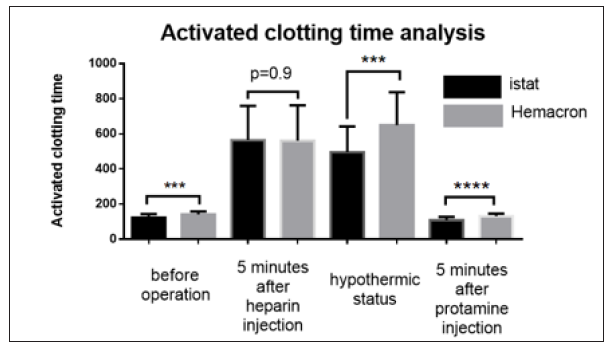 We demonstrated that in patients who had normal coagulation profile and renal function, Hemacron and i-Stat had good correlation before surgery, after heparin injection, hypothermic state, and protamine reversal. For patients with platelet dysfunction and abnormal liver function, the trend at different time points in cardiac surgery is the same. Thought i-Stat and Hemacron had good correlation, i-Stat took a shorter time for examination. In addition, the intra-group correlation was better with i-Stat. Our study also confirmed that Hemacron was inconsistent in hypothermic status, especially when platelet or liver function is abnormal. Our study has several limitations. First, we did not have golden standard to confirm the accuracy of these two tests. Previous studies used Factor Xa activity as a reference. As there are more and more anti-coagulation drugs which targeted different process of the coagulation cascade, simultaneous platelet count, platelet function, coagulation profile should be incorporated into the assessment for comparison. Second, we did not have enough sample sizes to discriminate the efficacy of i-stat and Hemacron in patients who had different medical conditions. However, in our analysis, all patients reached cut-points for the surgery at different stages, and the blood loss in post-operative day one showed that there was no coagulation dysfunction. Overall, Hemacron and i-stat were both adequate monitors for coagulation in elective cardiac surgeries.