Is there any Association between Postmenopausal Osteoporosis and Sclerostin Gene Single Nucleotide Polymorphisms in Turkish Women? Volume 6 - Issue 5

Osteoporosis is a multifactorial skeletal disorder described by reduced bone mineral density (BMD) with impaired bone microarchitecture, and increased fracture risk [1]. BMD derives the most crucial and best standard method for diagnosis [2]. Multiple risk factors influence BMD and genetic base plays a substantial mission in BMD variation [3]. It was shown by twin and family studies that genetic base constitutes about 50% to 85% of BMD [4-5]. The gene that encodes sclerostin or SOST, is mutated in the disease sclerosteosis, which is typically presented with increased BMD throughout life [6]. SOST is essentially expressed by osteocytes and SOST has been reported as one of the candidate genes for BMD and osteoporotic fractures by some researchers [7-8]. Especially transcriptional start site polymorphisms of SOST were reported as in association with BMD [9]. However, the other researchers failed to find relation between SOST gene and BMD in either premenopausal or postmenopausal women [10-11]. To date, most investigations searching the association between SOST polymorphisms and BMD variation have been done on European and Asian populations [12-13]. In this study we intended to evaluate the association between BMD and SOST gene single nucleotide polymorphisms (SNPs) in postmenopausal Turkish women./p>

This prospective, case-control study was carried out with 204 postmenopausal Turkish women applied to Firat University Hospital, Department of Nuclear Medicine between May 2008 and December 2009 after approval of local ethics committee (with number of 06-13). The mean age, height, weight and body mass index (BMI) of the study population were 55.1±5.5 years, 155.8±5.8 cm, 77.2±10.5kg and 30.8±4.5 kg/m2respectively. The population was divided into 2 groups with respect to their lumbar spine T score of BMD. The osteoporotic (OP) group was consisted of 126 postmenopausal Turkish women with T score smaller than -2.5 SD and the non-osteoporotic (NOP) group was consisted of 78 postmenopausal Turkish women with T score bigger than -1 SD. A regardful anamnesis and physical examination was performed for all participants. Postmenopausal period, smoking, and daily oral calcium input were determined by questionnaires filled at baseline. Fasting blood glucose, hepatic and renal functions were tested. Women who had undergone ovarian surgery, who had liver or kidney disease, diabetes mellitus, other endocrine diseases or using any drug known to affect bone metabolism (such as bisphosphonates, calcitonin, glucocorticoids, antiepileptics, thyroxin, or hormone therapy) for more than 3 months were excluded from this study. Informed signed consent was taken from all participants during blood sampling.

Genomic DNA was extracted from the peripheral blood using the Wizard Genomic DNA Extraction Kit (Promega,USA), with respect to manufacturer’s guidelines. Genotyping for the all SNPs was performed using polymerase chain reaction-restriction fragment length polymorphism (PCR-RFLP). We designed new primers for detection of 4 SNPs of SOST gene [rs17885799(- 22 G>A); rs17886183(*1004 G>A); Rs851054(4534 G>A) and rs865429(220+675 C>T)]. These SNPs were designated according to following criteria: minor allele frequency (MAF) >5% in Caucasians, polymorphisms formerly related with BMD in candidate gene association studies and not previously studied polymorphisms [14-16]. The primer sequences of 4 SNPs were presented on Table 1. The restriction enzymes and length of the restriction fragments were presented on Table 2. 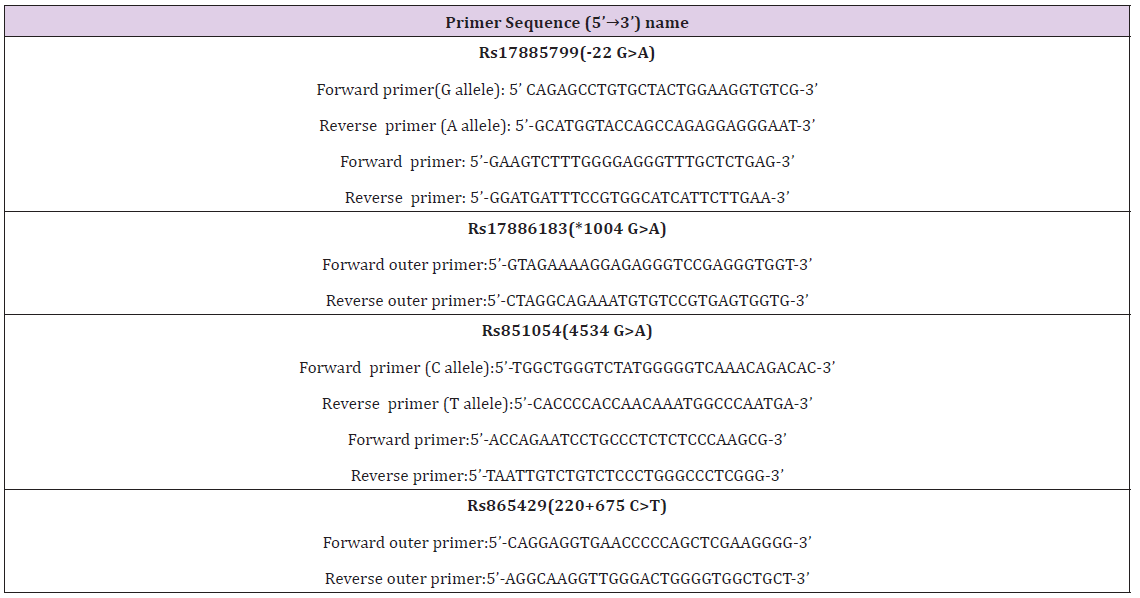 All data were transferred to digital media by using SPSS (Statistical Package for Social Sciences, USA) 16.0 version. The continuous variables were presented as mean ± SD (standard deviation) and qualitative variables were presented as number and percent. The comparison of continuous variables between groups were done with Student’s t-test or Mann-Whitney U-test according to normality of data. The categorical variables were compared with χ2 test or Fisher’s exact test where applicable. Analysis of variance (ANOVA) was performed to determine the lumbar spine and femoral neck BMD values of each SNP genotype. Hardy-Weinberg equilibrium was tested for each SNP using the standard χ2 test.

Subjects were grouped on the basis of genotype. We grouped subjects by allele copy number (0-2, corresponding to noncarriers, heterozygous carriers, and homozygous carriers, respectively) for each allele or haplotype. “Allele dose” was defined as the number of copies of a certain allele in the genotype. In case of a consistent trend reflected as an allele-dose effect, we performed a linear regression analysis to quantify the association after adjusting for age, menopausal period and BMI. In all analysis, a p value smaller than 0.05 was considered statistically significant.

In our knowledge, this is the first study demonstrating the frequency of SOST polymorphisms in postmenopausal Turkish population. The frequencies of 4 SNPs did not show significant difference between osteoporotic and non-osteoporotic postmenopausal Turkish women. We observed association between femoral neck BMD and rs865429 C>T polymorphism. Interestingly, in our population rs17885799 G>A and rs851054 G>A SNPs did not show similarity with Hardy-Weinberg equilibrium. This condition may be the result of ethnic origin and small study population.

We observed that SOST gene rs865429 SNP has had influence on weight and BMI of Turkish women. Piters et al. evaluated SOST rs10534024 polymorphism on 783 young and 600 elder Danish men. They reported an interaction between SOST rs10534024 polymorphism and body shape, but not with BMD. This polymorphism showed influence on weight and body mass index of Danish men [20]. Genome-wide association studies have proved that SOST gene is one of the hub gene that plays role on osteoporosis pathology [21]. In a prospective cohort study, researchers observed an allele-dose effect of SOST promoter region (SRP3) polymorphism on femoral neck and lumbar spine BMD among Dutch population1. Zhou et al. defined that SOST gene polymorphisms have effect on bone metabolism via treatment modality.

Balemans et al. analysed 5 polymorphisms of SOST gene on 619 perimenopausal white women with either elevated or reduced BMD. They concluded that, in their study group, common allelic variations of the SOST gene did not conduce to the arrangement of BMD. Despite the relation between SOST gene polymorphisms and BMD, the definite causal SNPs and the underlying molecular mechanisms are not clearly known. Ye et al. [24]. evaluated the expression patterns of 10 SOST SNPs on human osteoblast-like cell lines. They observed allele-specific interaction with SNPs rs1230399, rs7220711, rs1107748 and rs75901553 on BMD. Zhou et al. reported that frequencies of SOST SNPs in Chinese population are comparable with those in Japanese but dissimilar from those in Europeans and Africans. In their population, lumbar spine BMD showed minor correlation with SOST rs851054 polymorphism.

In our population interestingly, rs851054 polymorphism deviated from Hardy-Weinberg equilibrium. Full population showed homozygous mutant AA genotype. This finding may arise from different ethnicity and limited population.Our study has the following limitations. Firstly, we made the comparisons between osteoporotic and non-osteoporotic women. We did not investigate the frequencies of SOST SNPs on osteosclerotic women. Secondly, we could not investigate the plasma levels of sclerostin and boneturn- over markers.

The association between femoral neck BMD and SOST rs865429 C>T polymorphism may open new insights on pharmacogenetic studies of osteoporosis.

This study was financially supported by Firat University Scientific Research Foundation (FÜBAP). We thank to Dr. Tansel Balcı for her support during this study.