Morphine is an important analgesic pain control for the patients. The unwanted morphine analgesic tolerance limited its using. In this study, we attempted to improve the effectiveness of morphine and delayed morphine tolerance by intermittent administrations of morphine. Moreover, we have designed a new composite for management of pain, e.g. combination (GTPm) of green tea polyphenols (GTP, 30 mg/kg/day) with memantine (3mg/kg/day). The results showed that morphine (I.P. injection, 10 mg/kg/day) treated mice received morphine for consecutive five days followed by two days’ off can maintain analgesic tail flick test after long-term (54 days) administration of morphine.

The clinical treatment for pain control such as terminal cancer patients is important to improve the quality of life. Morphine is one of the most commonly used analgesics for those patients needed severe pain control [1]. However, along with morphine analgesic effects, it caused severe unwanted effects too (morphine tolerance and addiction). These side effects of morphine may hinder both the physician and the patient from using it. It is urgent to explore a novel regimen with more effective and less side effects for clinical application of morphine. Morphine acts directly on the central nervous system (CNS) to decrease the pain sensation [2,3]. However, morphine is known a highly addictive substance and the development of tolerance to morphine is also well known. Several hypotheses are given about how tolerance develops, including opioid receptor phosphorylation (which would change the receptor conformation), functional decoupling of receptors from G-proteins (leading to receptor desensitization), μ-opioid receptor internalization or receptor down-regulation (reducing the number of available receptors for morphine to act on), and upregulation of the cAMP pathway (a counterregulatory mechanism to opioid effects).

CCK might mediate some counter-regulatory pathways responsible for opioid tolerance. CCK-antagonist drugs, specifically proglumide, have been shown to slow the development of tolerance to morphine. Recently, studies claimed that neuroinflammation and the oxidative stress (increased production of reactive oxygen radicals (ROS), nitric oxide (NO) and peroxynitrite) [4-6] as well as activation of glutamate NMDA receptor played important roles in the generation of morphine tolerance and addiction [7,8]. In this study, we attempted to improve the effectiveness of morphine and delayed the development of morphine analgesic tolerance by a low dose and intermittent administration of morphine. Furthermore, we designed a new composite (GTPm) of combination of green tea polyphenols (GTP) with memantine. GTPs possessed antioxidant, anti-inflammatory and neuroprotective effects [9-13] which exhibited synergistic effects with memantine (an antagonist of NMDA receptor) against neuronal excitotoxicity [14]. Thus, we have investigated effects of GTPm on morphine analgesic effects in tail flick thermal pain test, hot plate paw withdrawal test and the capsaicin-induced orofacial pain test. The results obtained indicated that week off two days model of morphine administration attenuated development of morphine tolerance.

Adult male ICR (Institute for Cancer Research) mice 8-weeks old were used in this study. All mice were housed in groups of 5-7 in a cage with the same strain mates, in the animal faculty of the Chung Shan Medical University. Mice were allowed free access to food and water in a temperature controlled (22±1.5oC) and relative humidity 50-70% environment maintained on a 12/12 hours light/ dark cycle (light on 07:00 to 19:00). The experiment protocols were approved by the Animal Care Committee of Chung Shan Medical University (Approval No.1777).

One hundred grams of Chinese green tea, Longjing tea (produced by Wangs’ Tea Enterprise Co., Ltd., Taipei, Taiwan), was suspended in 1 L of distilled water at 75 °C for 30 min; then the supernatant was collected. This step was repeated three times. The supernatant was filtered to eliminate chlorophylls and undissolved particles. The total aqueous layers were concentrated to 0.5L under reduced pressure using a rotary vacuum evaporator. The concentrated solution was extracted with an equal volume of chloroform three times to eliminate caffeine and pigments. The remaining aqueous phase was then extracted with an equal volume of ethyl acetate three times to extract tea polyphenols. The ethyl acetate was combined and evaporated in vacuum. The residue was dissolved in a small volume of distilled water and freeze-dried. This golden brown solid matter was called green tea polyphenols

The following experimental design had 4 groups:

a) the control vehicle group;

b) the morphine group;

d) the morphine plus GTPm group

Green tea polyphenols (GTP 60mg/Kg), memantine (Mem 10mg/Kg), GTPm(GTP 30mg/Kg plus Mem 3mg/Kg) were dissolved in distilled water, which were orally administered to mice once per day and five times per week consecutively for 16 weeks. Morphine dissolved in saline was intraperitoneally injected (10 mg/kg/day) for consecutive five days and weekly off 2 days.

Tail flick test measured the latency(sec) of mouse tail flick in response to immersing the tail in 52±0.5oC or 48±0.5oC water bath. The hot plate test was used to assess the thermal nociceptive threshold of mice [15]. Each mice was placed on a 52±0.5oC hot plate to induce thermal pain. The response to either a lick of hind paw or a jump was recorded. In the absence of a response within 50 seconds, the animals were removed from the hot plate to avoid tissue damage.Orofacial pain response by injecting capsaicin (10μg/5μl) subcutaneously in vibrissa pad of mice and induced spontaneous orofacial pain response, including 3 distinct patterns of acute grooming behaviors: fore-paw rubbing, lower lip skin/ cheek rubbing against enclosure floor and hind paw scratching [16]. We record the total times of orofacial pain response in 20 minutes after receiving capsaicin to quantify orofacial nociceptive level.

TruScan photo beam Tracking are used to record behavior (walking distance in margin and center area, number of times for jumping, rest time and total time of walking) of mice to compute emotional alteration. The tracking activity of depressed mice exhibits limited margin area walking distance; while normal mice distributes equally in margin and center area walking distance. Additionally, the tally of jumping and standing show the exploration and curious behavior of normal mice. One of the side effects of morphine is depressed mood, which causes reduction in locomotor activity and exploratory behavior. If memantine and GTPm can improve this side effect, locomotor activity and exploratory behavior will increase and the tracking in margin and center area will be equally distributed. TruScan photobeam Tracking will be measured 20 minutes after the injection of morphine.

Results for each experiment were represented as mean ± SEM. One-way ANOVA followed by a post-hoc t test was used to evaluate differences between the groups. The level of significance was defined as p<0.05.

As shown in Figure 2, analgesic effects of morphine in the hot plate paw withdrawal thermal pain tests were enhanced by GTPm at a low dose (10 mg/kg/day) of morphine but had no such effect at the higher doses of morphine. 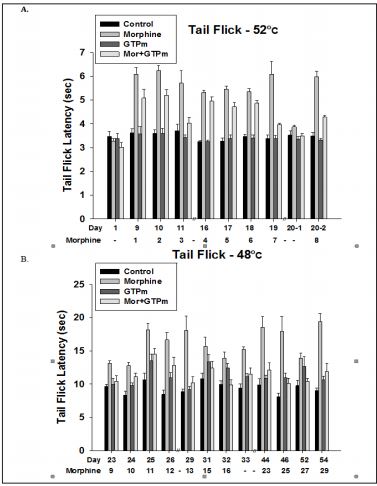 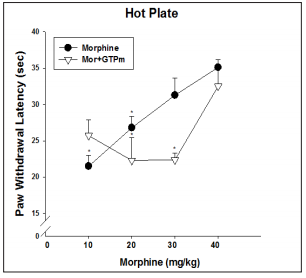 As shown on Figure 3, capsaicin induced orofacial pain on the mice chronically treated with morphine within 102 days. Morphine still effectively attenuated the orofacial pain, which was significantly enhanced by GTPm. 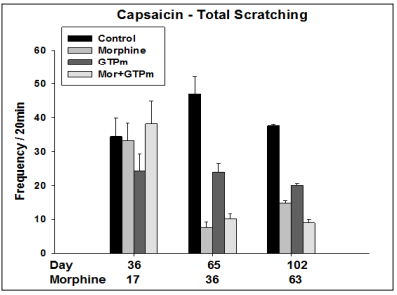 Figure 4: Behavioral changes of mice after chronic administration of mice. 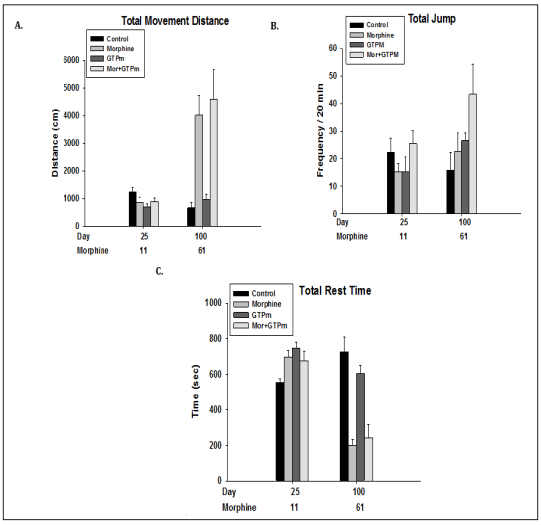 Morphine is one of the most commonly used analgesics for the clinical severe pain patient [1]. However, the severe side effects (depression, constipation, tolerance and addiction) limited using it [2,3]. In this study, we attempted to reduce the morphine analgesic tolerance and designed a novel regimen (GTPm) in enhancing morphine analgesic effects in mice. The results of this study showed that week off two days’ model successfully alleviated the development of morphine tolerance in tail flick thermal pain test and especially in the capsaicin-induced orofacial pain in mice. These findings implied that during morphine holiday at week off two days, the analgesic neurotransmission signaling of morphine such as μ-opioid receptor phosphorylation, G- protein coupled adenylate cyclase-cAMP signaling and the opioid receptor desensitization may restore to the normal states and thus the responses to morphine analgesic effects could be expected normalized.

The novel regimen of GTPm by itself was effective in alleviating the thermal pain in tail flick test and the orofacial pain induced by capsaicin. In addition, we have previously demonstrated that GTPm could also attenuate the development of morphine tolerance [17]. Thus, GTPm appeared to be a suitable adjunctive to long term low dose of morphine for clinical severe pain patients. Recent studies revealed that both neuroinflammation and oxidative stress in the brain involved in the induction of morphine tolerance [4- 8]. We have previously reported that tea polyphenols possessed pleiotropic effects including antioxidant, anti-inflammatory and neuroprotective effects [9-13] and also synergistically potentiated memantine (an uncompetitive inhibitor of NMDA receptors) in antagonizing neuroexcitotoxicity [14].

Similar to the recent report of venlafaxine suppressing morphine tolerance via the reduction of both neuroinflammation and nitric oxide [18], we have previously found that GTP could inhibit nitric oxide production and down regulate NF-κB signaling [9-13]. In this study, we have adapted 3 models of nociceptive assay, tail flick thermal pain test, hot plate paw withdrawal thermal pain test and capsaicin-induced orofacial pain model [15,16]. The former two assay models belonged to the peripheral pain, e.g. the pain transmission from peripheral nerve terminals to spinal cord and then to thalamic relay station, while the capsaicin-induced orofacial pain by stimulation of TRPV1 at trigeminal nerve endings and then transmitted the pain signaling to trigeminal ganglion and trigeminal nucleus caudalis. It is reported that NMDA receptors functionally interacted with TRPV1 and enhanced the pain sensation [19,20]. Memantine induced analgesic effects on orofacial pain by antagonizing NMDA receptors [8]. Furthermore, GTP can potentiate the analgesic effects of memantine [14]. By contrast, GTPm reduced the analgesic effects of morphine in peripheral tail flick thermal pain.

We proposed that the differences between peripheral pain and central orofacial pain may be due to the NMDA receptors at the spinal GABA interneuron released GABA. These findings were in accordance with the reports by Li et al. [21] and Petrus et al. [22] at that the peripheral nerve projection to the spinal cord where activation of NMDA receptors perhaps facilitated the release of GABA at interneuron. Accordingly, the classical analgesic drugs for peripheral neuropathic pain are usually poorly effective against orofacial pain.

We have demonstrated that week off two days’ model of chronic administration of morphine were able to delay the development of morphine tolerance in tail flick thermal pain and especially in capsaicin-induced orofacial pain. A combination (GTPm) of GTP and memantine is by itself an analgesic and also enhances the analgesic effect of morphine in orofacial pain.

The authors greatly appreciate former dean professor Mingyung Chou for his continuous support of this research.