Left Side Congenital Diaphragmatic Hernia with Sac and Broncho-Pulmonary Sequestration: A Report to Reinforce The Need to Excise the Hernia Sac Volume 6 - Issue 3

A 1.2kg, preterm female baby presented with left sided congenital diaphragmatic hernia (CDH). On left subcostal exploration, left CDH with sac was identified. At the time of excision of sac, a large nodule was identified sequestered on sac, which was later identified as extrapulmonary sequestration of lung. The baby succumbed to persistent pulmonary hypertension and pulmonary hemorrhage in post-operative period.

Congenital diaphragmatic hernia (CDH) is a common congenital anomaly. The presence of hernia sac is less frequent. The broncho-pulmonary sequestration (BPS) may be rarely associated with CDH, may even be cited as a cause for same. The presence of BPS may interfere with proper closure of postero-lateral defect. It is prudent to excise hernia sac in order not to miss any associated BPS and avoiding risk of injury to same while repairing hernia defect (especially when plication of sac done). 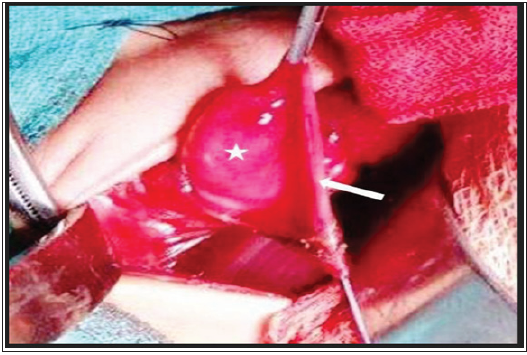 Congenital diaphragmatic hernia (CDH) has an incidence of 1 in 2000 to 5000 live births. The embryology of diaphragm is complicated, with its origin from 4 sources; septum transversum, dorsal mesentry, pleuro-peritoneal membrane and muscular component. Failure of fusion of various components results in various types of CDHs. The Bochdalek hernia, most common type, results in posterior-lateral defect due to non-fusion of pleuro-peritoneal membrane and septum transversum. Kluth et al. in experimental rat model, showed failure of normal growth of the post-hepatic mesenchymal plate (PHMP), resulting in CDH[1].CDH has associated congenital anomalies in 30-40% cases.These may include cardiac, urinary tract, gastrointestinal tract, central nervous system defects, skeletal and neural tube defects.

Broncho-pulmonary sequestration (BPS) is defined as nonfunctional lung tissue that has lost communication with normal developing lung during embryonic development.It usually has an anomalous systemic blood supply. BPS comprise approximately 6% of all congenital malformations, and these are associated with CDH in 30-40% of cases[2].Interlobar sequestrations are far more common but Chadha et al found that extralobar type is more common when associated with other congenital anomalies[3].BPS presence at the site of future diaphragm may hamper its proper development and may infact be the cause of CDH. The hernia sac is present in around 20 % of CDH patients. It is formed by parietal pleura and peritoneum. The prognostic value of a hernia sac was studied by Grizelj et al., showed that hospital survival was significantly higher for those with hernia sac.[2] Spaggiari et al. postulated in their study that the presence of a hernia sac is associated with a higher pulmonary volume and a better overall prognosis for CDH.Panda et al.[4] reported a significantly lower mortality in isolated CDHs with a hernia sac[5].

The beneficial effect of sac may be attributed to lesser herniation of abdominal contents to lung cavity and thereby lesser lung compromise and hypoplasia. The CDH overall has a high mortality rate of 30-50%[6].The pulmonary hypertension and hypoplasia are the leading causes of postnatal morbidity and mortality. Our case succumbed due to persistent pulmonary hypertension.

We report this case to postulate that the presence of BPS may be a cause for CDH and to reinforce the need of excision of hernia sac, to aid in complete excision of BPS and prevent its intra-operative injury and future diagnostic dilemma.