Fatty acids play bio vital role in biological life, one of the most important fatty acid triple omega. These fatty acids are un saturation fatty acids, two from them are essential where the body cannot able to synthesis them (omega 3, and 6), while the other is essential fatty acid the body can synthesis it but this need adequate amount from omega 3, and 6. Each type of omega fatty acids has own chemical structure, sources, and functions. Triple omega play essential role in protect the human body from heart attack. It is very necessary to make balance between triple omega dose, the high level lead to deposition of fats in the body, and this lead to several healthy problem.

Fatty acids are considering vital biochemical components for all organs of the human body, such as skin, lungs, heart, and brain [1]. Fatty acids are categorized in to two classes according to their chemical structure, two classes are saturation fatty acids in which the number of hydrogen that are attached to the carbon backbone of these molecules, while the other group un saturation fatty acid , where a few hydrogen missing with double bonds between the carbons where those hydrogen would go. Also, fatty acids can be classified according to the body requirements in to essential fatty acids that your body does not produce on its own, and non-essential fatty acids where the body can produce them [2]. Omega fatty acids are described as unsaturated healthy fats due to them prevent a number of medical problems such as depression, cardiovascular disease, brain dysfunction, asthma and arthritis [3]. There are 3 types of omega fatty acids; Omega-3, Omega-6, and Omega-9, each one from them has own chemical structure and biological roles [4]. Omega-3 fatty acid (α-linolenic acid) is an essential fatty acid that plays significant role in brain function and may help in prevention heart attack. The American Heart Association recommends a diet in which fatty fish, like salmon, herring, sardines and tuna are consumed at least twice a week [5].

In addition to their role in the structure and function of cells throughout your body, the omega-3s reduce your of cardiovascular disease through multiple actions. They fight inflammation, keep blood vessels healthy, and reduce levels of cholesterol and triglycerides. They may also help prevent rheumatoid arthritis and cancer, according to the Harvard School of Public Health [6]. The other essential fatty acid is Omega-6 fatty acid (Linoleic Acid); omega-6 should be taken about twice as much as omega-3; where omega-6 to omega-3 ratio is 2:1 [7]. Finally, Omega-9, or monounsaturated oleic and stearic acid, is a non-essential fatty acid which produced naturally by the body in the presence of enough amount of both Omega 3 and 6 fatty acids. In the absence of omega fatty acids 3, and 6 omega 9 must take from the diet. Natural foods and healthy benefits for triple omega are summarized in the following (Table 1)[6]. 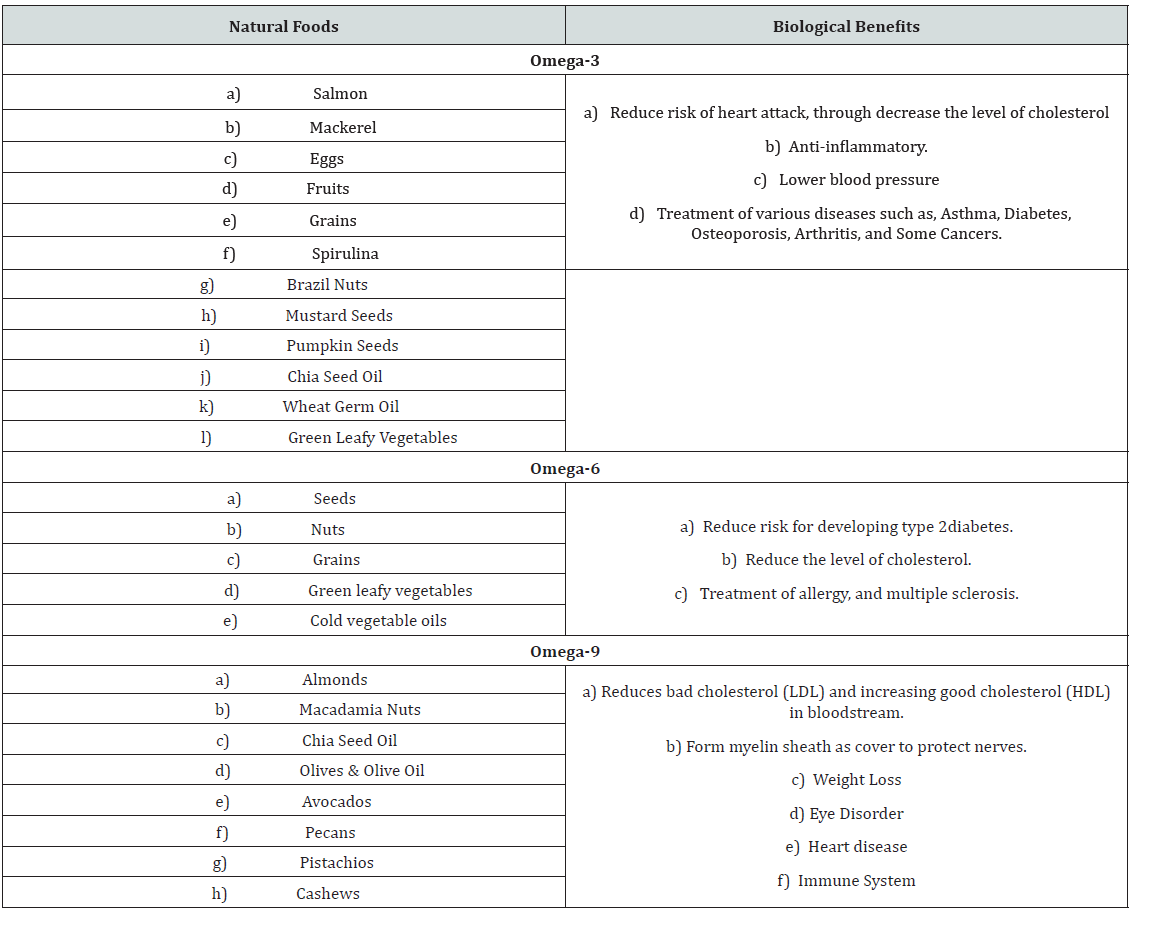 Usually maintains a healthy diet that provides all nutrients. It will keep you away from many diseases [8]. As a result of consumption Omega 3 6 9, this creates unbalance between these nutrients. In line for unbalance of nutrients it creates deposition of those extra fats. These lead to a health problem. These fatty acids must be taken according to the American Heart Association (AHA) as the following doses [7]:

Some signs can be happen if triple omega take in large dose includes:

a) Skin Rashes or itching