A Glasgow Hospital was recorded for its preeminence in surgical pathology training. Its head’s biography was on record also. More recently, a lecturer there co-authored a case of breast cancer with 3 histological types. Fortunately, he took great interest in my training as I acknowledged in publishing a triple lung cancer case. Therefore, I propose to document such triple breast carcinomas gathered from my Ibo/Igbo ethnic group thanks to using a Birmingham (UK) group’s advice that instituting a histopathology data pool favors epidemiological analysis. Twenty-four cases are presented here in order to add to the world literature. Among the findings is that different quadrants need not be invoked, seeing that even a microscope slide may reveal up to three different types.

The development of surgical pathology nicely took place during the latter part of the 19th Century [1]. What occurred during it and the present century was fully publicized as regards the Glasgow Western Infirmary [2]. Fortunately, since I was trained there, I wrote on its first great name, Joseph Coats (1846-99), in 1970 [3]. Moreover, Andrew Sandison, who helped me greatly there, was much excited on publishing a triple case of breast carcinoma [4]. Little wonder that from there I personally published a triple case of lung cancer [5]. This trend was pursued on returning to my home country, Nigeria, especially as regards the Ethnic Group, Ibos/Igbos [6]. Furthermore, having been stimulated by a Birmingham (UK) group concerning how the establishment of a histopathology data pool could promote epidemiological analysis [7], this paper analyzes my experience of using such a tool on breast cancers. In particular, the occurrence of triple tumors in this organ is deemed to be worthy of documentation. Although multiplicity may be thought of in terms of the quadrants of the breast, it is noteworthy that a single microscope slide may exhibit up to three distinguishable carcinomas.

From 1970, the author, as Head of the Regional Pathology Laboratory established at Enugu by the Eastern Region of Nigeria Government, began to collect surgical specimens from numerous doctors working in several hospitals. The very serious stipulation was that, in sending the formalinized specimens, they must be accompanied by Request Forms which are filled properly. The accumulated records dealing with the breast are analyzed here as a contribution to world literature with reference to patients exhibiting three different types of carcinomas (Tables 1 & 2). 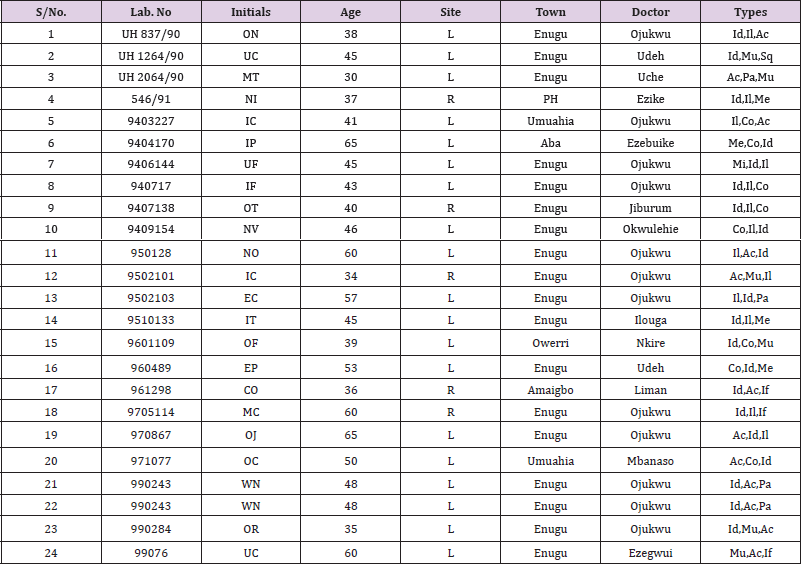 a) Case No. 3 UH 2064/90. Mostly strikingly, there is a cribriform pattern seen in adenoid cystic carcinoma. Then there is frank frond-like picture of papillary carcinoma. Furthermore, there is an area in which clumps of tumour cells float as it were in mucin.

b) Case No. 22. 990243. The appearances are malignant and variable. Most areas show invasive ductal type while adenoid cystic and papillary forms are discernible.

c) Case No. 23. 990284. Mostly invasive ductal carcinoma picture is present but there are focal areas of mucoid degeneration and of cribriform formation.

A Siena review[8] on 1158 cases of breast cancer probably provides the correct background regarding “The biological and clinical significance of multifocal and multicentric (MF/MC) breast cancers and the choice of appropriate surgical treatment for these tumors are still debated.” Accordingly, I have selected the distinct group that consists of patients whose biopsy specimens exhibited three distinct histological primaries. I am persuaded that their true trend has been documented above.It is evident that the “multiple” type may not be separated from double or triple varieties “[9]”. Moreover, multiple primary tumors may imply the combination of breast and other organs [10] The present study applies solely to the breast. Incidentally, the Siena group[8] defined multiplicity in terms of the quadrants of the breast. However, this study shows that even one slide can exhibit up to three varieties of growths!Incidentally, some generalizations may be made. The peak age of incidence is from 41 to 50 years. Most of the operations were carried out in the Cosmopolitan Enugu where Dr. Ojukwu proved to have done half the operations. Surprisingly, left sided growths preponderated in the ratio of 4:1. The commonest cell type was the invasive ductal carcinoma (20 times) and the least was squamous carcinoma (once).