Diagnostic criteria for multiple sclerosis (MS) have been changing for years to enable easier and faster ways to confirm diagnosis especially during last decade. They lead to earlier treatment of patients with MS what gives higher likelihood to keep patients fit and capable of working. Dissemination in time (DIT) and in space (DIS) are general rules which are necessary to diagnose MS what was maintained in all diagnostic criteria, which have been published up till now[1]. Current criteria were published in 2017 and enable diagnosing MS even in patients, who earlier could not have MS diagnosed. This results from the facts that CSF oligoclonal bands present in patients with DIS without DIT are enough to MS diagnose[2]. Cerebral Autosomal Dominant Arteriopathy with Subcortical Infarcts and Leukoencephalopathy (CADASIL) is a disease of small vessels related to gene NOTCH3 mutations leading to symptoms of migraine with aura, recurrent ischemic incidences, cognitive impairment and behavioral disturbance.

Anti-borrelia antibodies in serum were not revealed. Repeated MRI scan showed similar pictures as before, neither new lesions nor lesions with contrast enhancement, although with the fact, that U-fibers were not attached suggested to consider whether lesions could not have been resulted from congenital or inflammatory arteriopathy. Diagnose of MS was maintained. In December of 2015, her sister was admitted to the hospital due to speech disturbances, paraesthesia of right upper limb and right side of the face lasting fifteen minutes, followed by a headache. Headaches had been returning for a few years once a week, approximately in anamnesis. Additional tests excluded cardiac source of microembolism. The tests into autoaggressive diseases only thyroid peroxidase antibody (TPO) and antithyroglobulin antibody (TG) were present – TPO 595,0 U/ml, TG 112,3U/ml. MRI scan showed no progression in comparison to the MRI from 2012 (Figures 1-3).

Sister of patient with MS suspicion had similar symptoms and picture of MRI, however she was diagnosed and treated in a different Medical Centre. Therefore, she was diagnosed as a patient with migraine.Considering medical history, familial anamnesis, clinical course of the disease and results of additional tests advanced suspicion of CADASIL. Thus, patient with sister were directed to Institute Psychiatry and Neurology in Warsaw to perform myo-cutaneous biopsy. In this test presence of granular osmophilicmaterial (GOM) was confirmed in patient and her sister [3](Figures 4 & 5). It enabled to confirm CADASIL diagnose in both patient and her sister[4]and [5]. Unfortunately, patients did not agree to a genetic test. 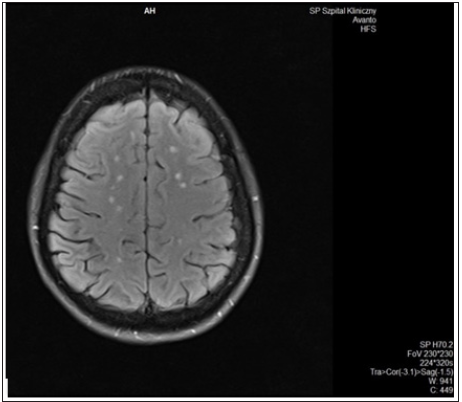 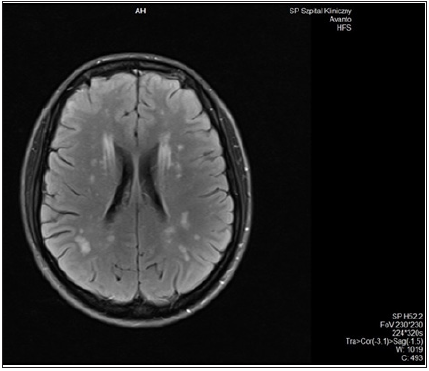 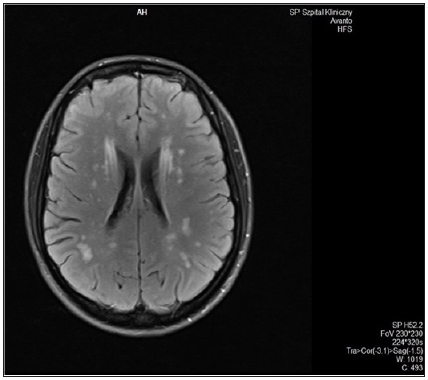 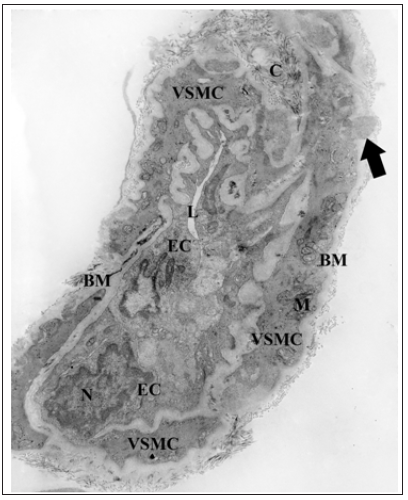 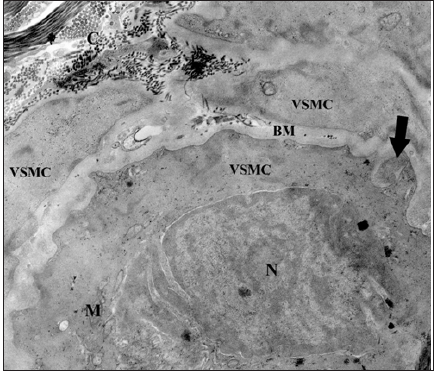 Differential diagnose of MS sometimes can be difficult, especially when clinical course and results of additional test suggest MS diagnose. In this case, MS diagnose was suggested according to MRI results with presence of disseminated lesions, despite the fact that U-fibers were spared. CADASIL is a rare congenital disease which can mimic MS in some cases. Similar misdiagnosis was described earlier [6]. According to the new diagnostic criteria of MS which enable earlier diagnose patients with MS another diagnosis should be taken into careful consideration.