Materials and methods: Our study included 40 patients with hypothyroidism and 40 normal control subjects. In all the subjects, T3, T4, and TSH were measured by ELISA whereas trace elements zinc and copper were measured colorimetrically

Conclusion: In conclusion, hypothyroid patients had significantly decreased concentration of zinc and copper. Hence, diet rich in trace elements, viz. zinc and copper should be supplied to patients of hypothyroidism in order to maintain normal thyroid hormone function.

Endocrine disorders are common among Indian population, out of which thyroid disorders represents an important subset of these endocrine disorders [1]. Thyroid diseases are primarily conditions that affect the amount of thyroid hormones being produced [2]. Hypothyroidism is characterized by a broad clinical spectrum ranging from an overt state of myxedema, end-organ effects and multisystem failure to an asymptomatic or subclinical condition with normal levels of thyroxine and triiodothyronine and mildly elevated levels of serum thyrotropin [3,4]. The prevalence of hypothyroidism in the developed world is about 4-5% [5,6]. However, in India, Unnikrishnan et al. conducted a study in eight different cities and found a high prevalence of hypothyroidism (10.95%), affecting approximately 1 in 10 adults in the population [7]. Hypothyroidism can lead to a number of complications in humans such as:

a) Mental health issues such as depression and cause the slow functioning of the brain,

b) Heart problems because of increase in the level of lowdensity lipoprotein (LDL) cholesterol. Sometimes it causes heart failure and enlarges the heart,

c) In hypothyroidism, the low levels of thyroid hormone can alter the process of ovulation which leads to infertility in women [8].

In order to maintain optimal health of an individual, adequate supply of carbohydrates, proteins, lipids, macronutrients, micronutrients as well as trace elements are needed [9]. Although the levels of trace elements are low in human body, they play an essential role in a number of biological processes through their action as activators or inhibitors of enzymatic reactions, by competing with other elements and proteins for binding sites, by influencing the permeability of cell membranes, or through other mechanisms. Trace elements are known to influence hormones at levels of action, including hormone secretion and activity and binding to target tissue. Conversely, hormones influence trace metals metabolism at several levels of action, including excretion and transport of trace elements [10]. Some of the important elements include selenium, iron, and manganese, copper (Cu), and zinc (Zn). Deficiency, lack, and an increase of trace elements can cause irrepa¬rable damages [11]. Zn is an essential trace element which is important for thyroid function and normal thyroid homeostasis. Its roles are complex and may include effects on both the synthesis and mode of action of the hormones [12].

Basically, Zn is required for the proper function of the “enzyme 1,5’- deiodinase,” the enzyme catalyzes” the conversion of biologically thyroxine (T4) to its active form triiodothyronine (T3) and decreases the metabolic rate [13]. In addition to this, thyroid hormone binding transcription factor, which are essential for modulation of gene expression, also contain zinc bound to cysteine residues [14]. Copper, the third most abundant mineral in the human body, plays an important role in thyroid metabolism, especially in hormone production and absorption. Copper stimulates the production of the thyroxine hormone T4 and prevents over absorption of T4 in the blood cells by controlling the body’s calcium levels. Apart from this, copper is also required for the synthesis of phospholipids, which are required for the stimulation of thyroid stimulating hormone [15]. The study regarding the role of trace elements in hypothyroidism is not well documented in the literature; hence,we have planned this study with the aim to find out the concentrations of zinc and copper in hypothyroidism and to determine the possible correlations between trace elements and thyroid hormones.

The present case-control study was carried out in the Department of Biochemistry, Muzaffarnagar Medical College, Muzaffarnagar after getting approval from Institutional Ethical Committee. 40 diagnosed patients with hypothyroidism aged between 20 to 60 years of either sex were taken as cases and 40 normal healthy age and gender-matched individuals were taken as controls. The patients with hypothyroidism were diagnosed on the basis of clinical examinations and hormones levels (T3, T4, and TSH) by a physician. The controls were taken from in and around of Muzaffarnagar Medical College, Muzaffarnagar. Patients of hepatic disease, renal disease, malabsorption syndrome, those who are suffering from any other endocrinal disorders e.g. diabetes, those who are on nutritional and antioxidants supplements, smokers, tobacco chewers and subjects not willing to give consent were excluded from the present study. Written informed consent was taken from cases and controls after a full explanation of the study.

About 5 mL of venous blood sample was collected under all aseptic precautions from cases and controls and transferred to the sterile plane test tube. The blood was allowed to clot and centrifuged at 5000 rpm for 5 minutes. Sera were separated and stored at -200C until analysis. T3, T4, and TSH were measured by using commercially available ELISA kit (Bene Sphera Avantor Inc, India). Serum zinc and copper were determined by colorimetric method.

Statistical analysis and interpretation of data were done by Statistical Package for Social Science version 20 (IBM, SPSS statistics 20, Armonk, NY, USA). The data were checked for normality by using Shapiro-Wilk test. The statistical differences between cases and controls were determined by student independent sample t-test and Mann-Whitney U test for normally distributed data and skewed data, respectively. Chi-square test is used for categorical data. Pearson’s correlation analysis was done to find a probable correlation between variables. p-value less than 0.05 were considered significant.

Table 1: Shows the clinical characteristics of the subjects included in the study.

Figure 1: Comparison of Zinc and Copper between controls and hypothyroidism patients. 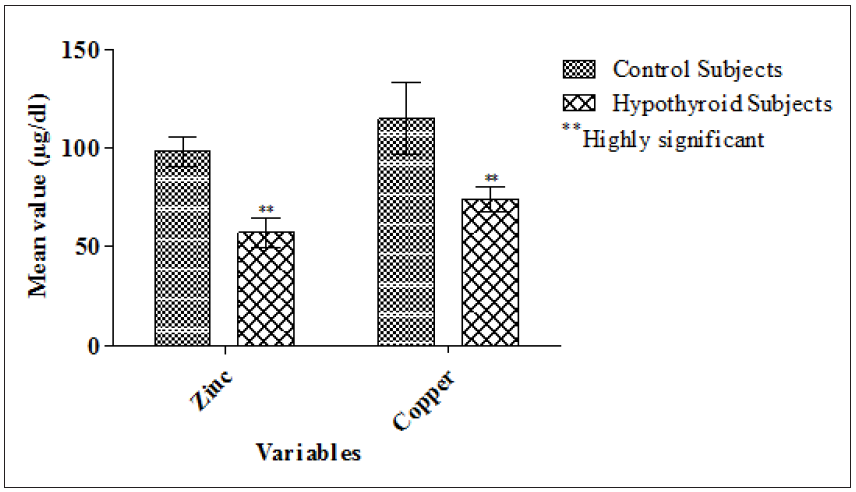 In our study, we found significantly decreased level of zinc in patients of hypothyroidism as compared to control subjects, which is in line with the findings of Mohammed et al. [15], Baloch et al. [24], Al-Juboori et al. [25], Ali et al. [26], Jinger et al. [27], Rashid et al. [28]. The possible mechanism for the decreased level of zinc in hypothyroidism patients is that gastrointestinal absorption of zinc is severely impaired in these patients[29]. Another explanation, according to the study done by Bellisola, is due to the significant influence of TSH in the variations of concentration of iodine, selenium, and zinc in normal and altered human thyroid tissues [30]. In addition to this, the tubular excretion of Zn also leads to low levels of plasma zinc [31]. Copper is an essential element, acts as a cofactor for tyrosinase which is required for the biosynthesis of tyrosine; a protein component of thyroglobulin needed for the synthesis of the thyroid hormones [32]. In the present study, we revealed the significantly decreased level of copper in patients with hypothyroidism as compared to controls which is consistent with the previous studies [27,28].