It is reported that about 95% of the populations in the world have dental caries. Although NaF is an effective anticariogenic agent and F- is the strongest electronegative ion, the abuse of NaF is not only harmful to human beings (dental fluorosis, hepatotoxicity, nephrotoxicity etc.) but also an ecosystem destroyer. It is urgent to explore a better anticariogenic agent for prevention and therapy of dental caries. In this study, we have comparatively studied the antibacterial effects of four different kinds of tea polyphenols on the cultured cariogenic Streptococcus mutans UA159. The results obtained showed that tea polyphenols are more potent than NaF in inhibiting the growth of UA159 which is based on the concentrations (mM) required for 50% inhibition. An important finding is that black tea polyphenol is not only by itself to inhibit the growth of UA159 but also synergistically enhanced this inhibitory effect of NaF. Furthermore, tea polyphenols were also much more potent than NaF in inhibiting α-glucosidase activities of UA159. In conclusion, the antibacterial effects of tea polyphenols on the cultured anticariogenic Streptococcus mutans UA159. It is expected that tea polyphenols could be developed as promising anticariogenic agents in the future.

Dental caries is the most common disease in the dentistry. It is estimated that 95% of populations in the world have this disease [1,2]. Thus, its medical cost is enormous greater than those on cancer, cardiovascular diseases, diabetes etc. Although the etiology of dental caries is explored, it is very difficult to eradicate. It is urgent to explore a better regimen for prevention and therapy of dental caries. Streptococcus mutans is recognized as a cause of dental caries. It can degrade sugar into glucose which is polymerized into glucan [3,4]. Dental plaque containing 70 % of S. mutans and glucan was performed on the enamel surface. S. mutans can secret organic acids, which destroyed enamel and eventually led to dental caries. The effective anticariogenic NaF not only possessed anti-bacterial effects but also altered enamel structure to synthesize aciduratic CaFPO4 [5-7]. However F- is the most electronegative ion, not only highly toxic to tissues and cells (fluorosis, hepatotoxicity and nephrotoxicity), but also destroying our ecosystems [8-11]. It is very important to develop a better anticariogenic agent to replace or reducing the consumption of NaF and its analogues.

Tea polyphenols such as green tea polyphenol (EGCG) has been demonstrated to be a potent anti-cariogenic agent [12-15]. However, there are four kinds of teas commonly used (unfermented green tea, half-fermented oolong tea, complete fermented black tea and post fermented Puerh tea). In our laboratory, we have demonstrated that both black tea and puerh tea are the best to modulate obesity and diabetes, and cancer chemoprevention [16-22]. Because there are still no reports on the comparative potencies of the anticariogenic effects of the teas, thus, in this study, we attempted to explore tea polyphenols either alone or in combination with NaF on the growth, acid secretion, biofilm formation and α-glucosidase activities of the cultured S.mutaus UA159. We have demonstrated that the antibacterial effect of black tea polyphenols was not only the most potent antibacterial, but also exhibited synergistic inhibitory effect in combination with NaF on UA159.

Preparation of Tea Polyphenols and NaF

Effect on the Growth of UA159

The cariogenic Streptococcus mutans UA159 was cultured in brain heart infusion (BHI) medium at 37±0.5℃ in anaerobic chamber, 10 % H2,5% CO2 and 85% N2, Forma Sci. Inc., Masietta, OH, USA [23]. The bacterial cell growth was assessed by measuring the optical density at 600 nm wavelength (OD600) with ELISA microplate reader [23]. The concentration for 50 % inhibition (IC50) was calculated from the concentration-inhibition curve. The potencies of the inhibitory effects of the combination were estimated by the formula of combination index (CI) [24]:

UA159 was cultured for 16 hrs and then diluted with 0.004% bromocresol purple in BHI to 1.7×109 CFU/ml. To a 96 well microplate,180μl of diluted UA159 was added and mixed with 20μl of tested solution(NaF and tea polyphenol either alone or in combination). Acid secretion of UA159 was monitored by the increases of OD430nm of pH indicator bromocresol purple after incubation at 37±0.5℃ for 16 hrs. The inhibitory effects (IC50 and combination index) of NaF and tea polyphenols either alone or in combination were estimated from the concentration-inhibition curve.

The cultured UA159 was repetitively freeze-thawing three times and then homogenized by ultra-sonic treatment. For measurement of α-glucosidase activities, the homogenate was optimally diluted with 0.1M PBS containing 2mM CaCl2. To each well of 96-well microplate, 100μl of the diluted homogenate was mixed with 50μl of various concentrations of NaF and tea polyphenol either alone or in combination; the enzyme activity was initiated by addition of 50μl of 1.25mM p-nitrophenol-α-D-glucopyranoside(PNPG) and then incubated at 37±0.5℃ for 24 hrs [27]. The increase of endproduct p-nitrophenol which was proportional to the enzymatic activities was measured by optical density at 405nm. IC50 of the test compounds and their combination index were estimated as described above.

The experimental data were expressed as mean ±S.E.M. The significance of the difference between the tested groups and the control group was analyzed by one way of variance (ANOVA) and a post hoc t-test. P<0.05 was regarded as statistical significance.

Antibacterial Effects of NaF and Tea Polyphenols on UA159

As shown on (Figures 1 & 2), NaF and tea polyphenols were effectively in the inhibition of growth, acid secretion, biofilm formation and α-glucosidase of S.mutans in a concentrationdependent manner. The concentration for 50% inhibition (IC50) were obtained from Figure.1 and listed on Table 1. From IC50 values, it was shown that the order of the potencies of growth inhibition by four kinds of tea polyphenols was as following: TF50>OTP>GTP >Puerh>EGCG. It is noted that if IC50 was expressed in mM instead of mg/ml, the results showed that EGCG and OTP were about two and four times respectively more potent than NaF and TF50 was the most potent, about 17 times greater than NaF.The cultured medium containing 0.2% sucrose had little effect on NaF but reduced the inhibitory effect of tea polyphenols on the growth of UA159 (Table 1). Similarly, tea polyphenols also inhibited the acid secretion and biofilm formation of UA159. By contrast, four tea polyphenols except Puerh tea polyphenol were much more potent than NaF in inhibiting the α-glucosidase activities of UA159 homogenate (Figure 2) and (Table 1).

Table 1: Antibacterial effects of NaF and tea polyphenols on the cultured UA159. 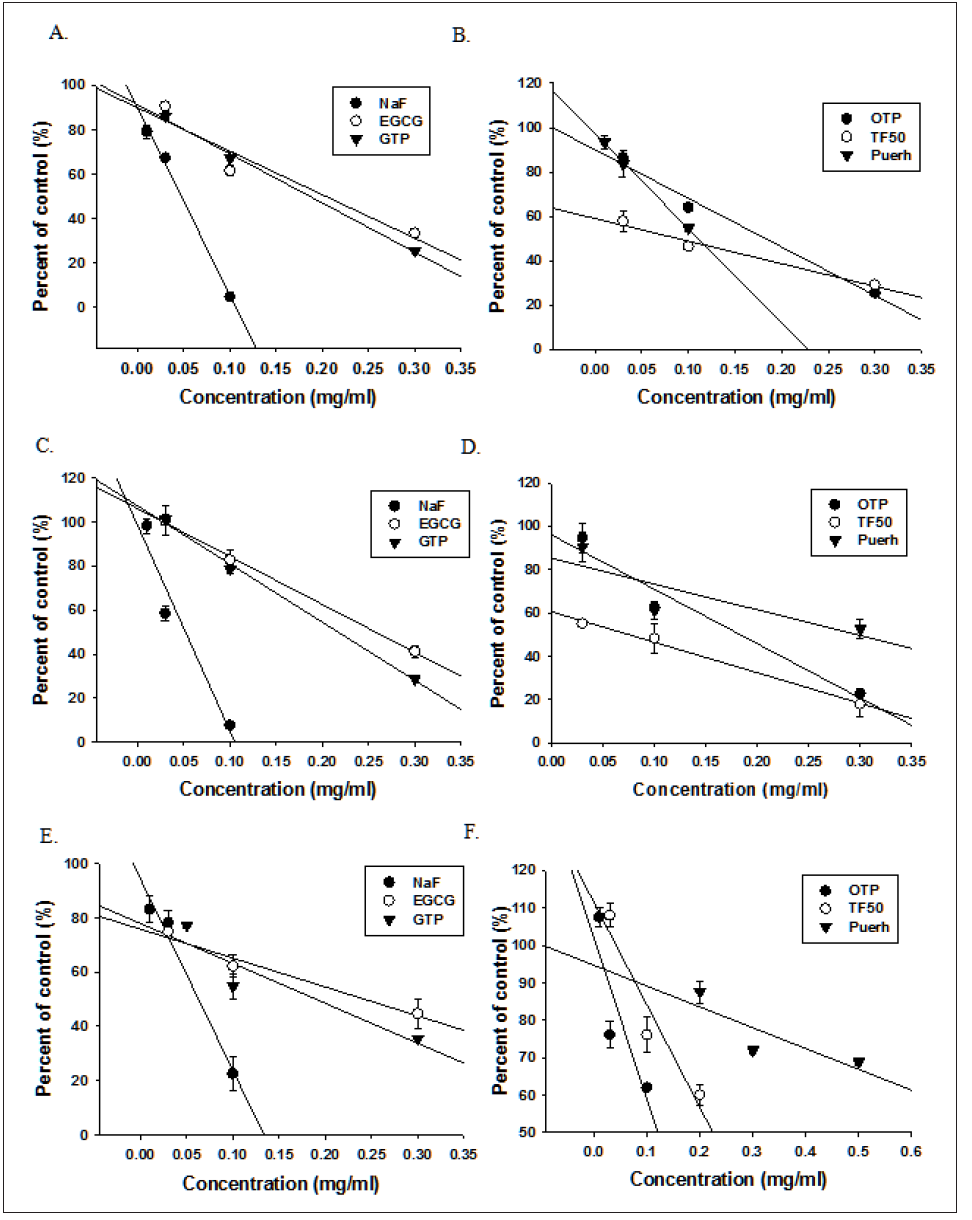 Figure 2: Concentration-inhibition curve of NaF and tea polyphenols either alone (A, B) or in combination (C, D) on α-glucosidase activities of Streptococcus mutans UA159. 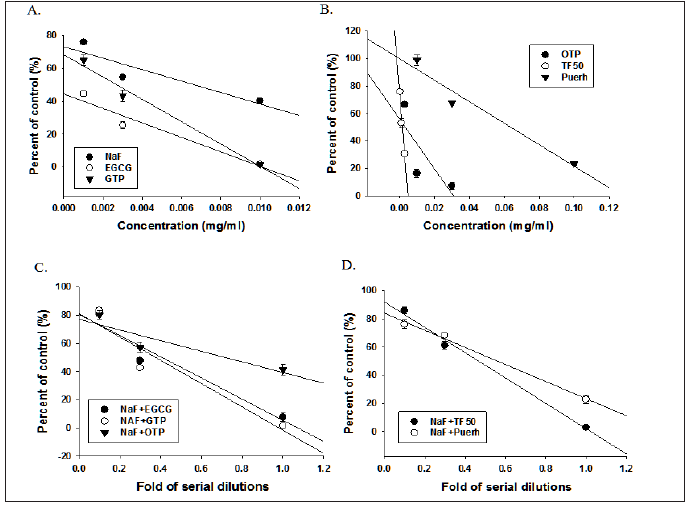 Antibacterial Effects of the Drug Combinations on UA159.

As shown on Figures 2 & 3, the inhibitory effects of NaF combined with tea polyphenols on the growth, acid secretion, biofilm formation and α-glucosidase activities of UA159 were in concentration dependent manner and the calculated concentrations for 50% inhibition (IC50) were listed on Table 2. The tea polyphenols such as EGCG and TF50 were synergistically enhanced NaF in inhibiting the growth of UA159 as revealed by the combination index (CI) less than 1.0 (Table 2). However, these drugs combinations exhibited either addition or mild antagonism with each other in the inhibitory effects on acid secretion, biofilm formation and α-glucosidase activities, with an exception that OTP synergistically enhanced NaF in inhibiting acid secretion and α-glucosidase activities

Table 2: Antibacterial effects of NaF and combination with tea polyphenols on UA159.

Figure 3: Concentration-inhibition curve of NaF and tea polyphenols in combination on the growth (A, B), acid secretion (C, D) and biofilm formation (E, F) of Streptococcus mutans UA159. 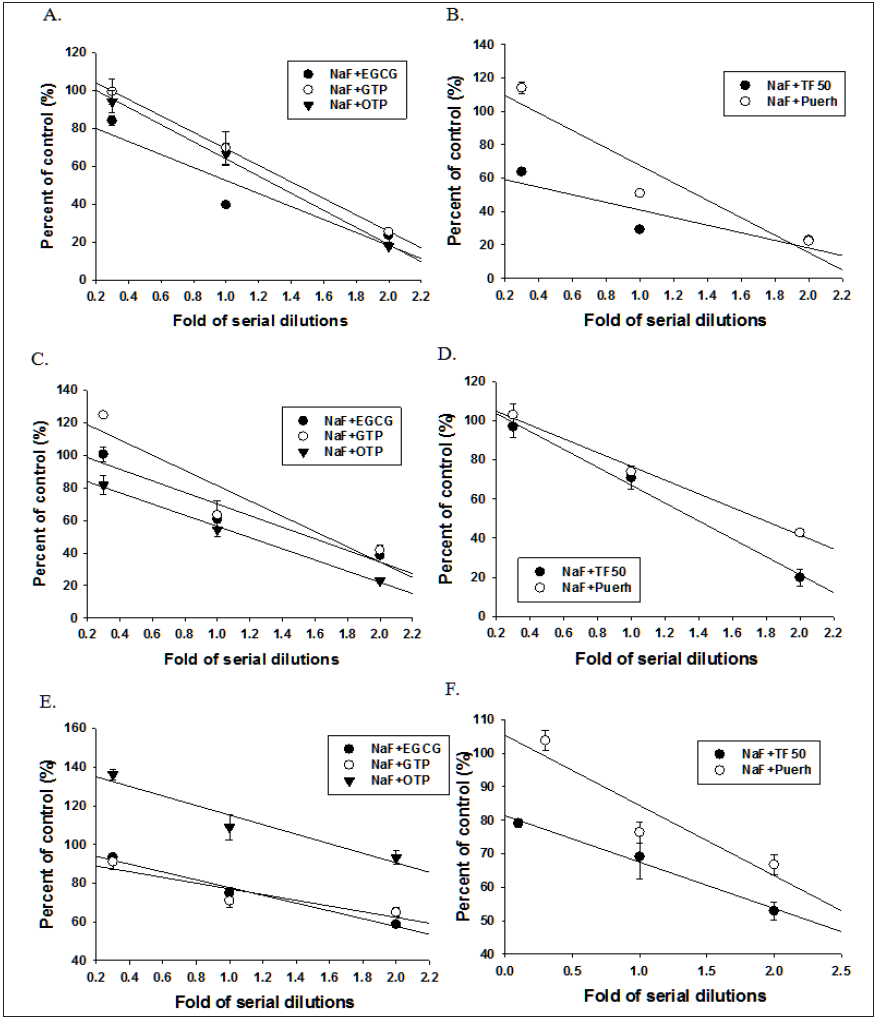 Streptococcus mutans is a major cause of dental caries, which can form dental plaque on the enamel surface and secrets organic acid to induce enamel dermineralization, leading to dental caries [1-3]. NaF is indeed a very effective anticariogenic agent, not only inhibits the growth of S.mutans but also inhibit acid secretion and biofilm formation [5,6]. Because of the highly toxic effects on human tissues and also destruction of our ecosystem [7-11], we need to search for another effective anticariogenic agents.Recently, it is getting popular to search naturally occurring anticariogenic agents such as curcumin [28-30], probiotics [31]. We considered that tea polyphenols possessing the pleiotropic biological effects would be the ideal anticariogenic agents. Thus, we attempted to study the various kinds of tea polyphenols either alone or in combination with NaF on antibacterial effects of S. mutans which has not been reported yet.

Tea is the most popular beverage in the world. The health effects of tea polyphenols (antioxidant, anti-inflammatory, cancer chemoprevention, antiobesity, antidiabetic and neuroprotection etc.) have well been studied [16-22]. We have demonstrated that black tea and Puerh tea are the best, oolong tea is next and green tea is the least in hypolipidemic and antiobesity effects. Green tea polyphenol EGCG has been well studied in anticariogenic effects [15]. In this study, we have found that black tea polyphenol is better than EGCG in inhibiting the growth of cariogenic S. mutans UA159 especially the synergistic effect of black tea polyphenol in combination with NaF in the inhibition of bacterial growth. This finding is apparently in accordance with the content that antibacterial effects of tea polyphenols are mediated by its destructive effects on the cell membrane. Puerh tea is perhaps the best to modulate the cell metabolism rather than on altered effects on the cell membrane.

In conclusion, we have found in this study that all of the tea polyphenols exhibited more potent than NaF in inhibiting the growth of cariogenic Streptococcus mutans UA159 (as estimated in molar concentrations). Among them, black tea polyphenols were not only the most potent but also synergistically enhanced NaF in this effect. It is expected that black tea polyphenols would be the promising anticariogenic agent in the future.

The authors greatly appreciate the former dean Professor Ming young Chou for his continuous support of this research. It is indebted to the late Academician Professor Jen-Kun Lin for his enthusiastic encouragements in the studies of tea polyphenols. Thanks to the excellent technical assistance of Miss Yi-An Chen. This research was supported by a grant from CSMU F0130004.