Background : Adenocarcinoma is the commonest histological form of Gastric cancer. But several unusual presentations have been reported. Perigastric lymph nodes are involved very early and are of prognostic importance. However, carcinoma from other organs can also spread to this lymph node group.

Gastric cancer (GC) includes all malignant epithelial tumour of the stomach. Adenocarcinoma with various histological types (papillary, tubular, mucinous and poorly cohesive) account for 95% of cases [1]. However, several unusual presentations have been reported. These are in the form of unusual histological subtypes, configuration, spread or complication [2-6]. Lymph nodes (LN) are the commonest site of metastasis in gastric cancer and is a recognized prognostic factor and predictor of disease recurrence [7]. Perigastric LN are involved very early. However, cancers of the oesphagus, lung and the neck region can also metastasize to the perigastric nodes [8-10]. Furthermore, metastic cancer in perigastric LN with unknown primary has been reported in the literature [11]. Cancer of unknown primary site (CUP) defined as metastatic disease without identifiable primary tumour after a full diagnostic work-up, represents 3-5% of all invasive cancer and squamous cell carcinoma account for 15% [12]. We report a case of early antral gastric adenocarcinoma (pT1a) with synchronous Squamous Cell Carcinoma (SCC) metastasis in 4 out of 34 perigastric LN with occult primary SCC.

Figure 1: Upper GI Endoscopy revealing a broad base tumour in the gastric antrum. 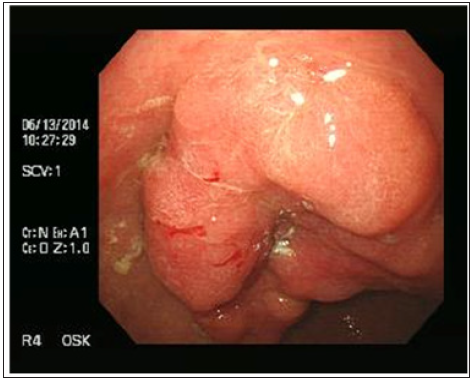 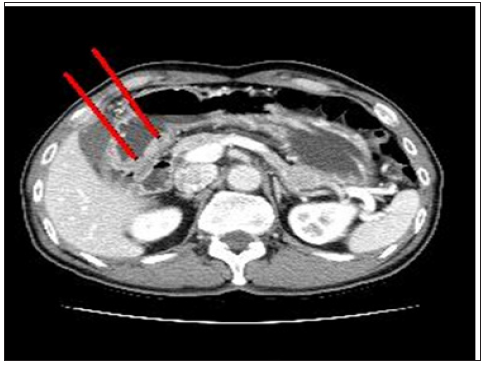 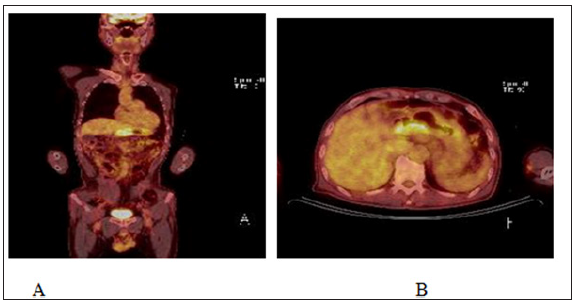 Figure 5: Microscopic observation of the tumour (hematoxylin and eosin A x20 and B x40) showing moderately differentiated tubular adenocarcinoma.

Figure 6: Microscopic observation of the lymph nodes (hematoxylin and eosin A x20, B and C x40 magnification) showing SCC with keratin formation without any adenocarcinomatous component. 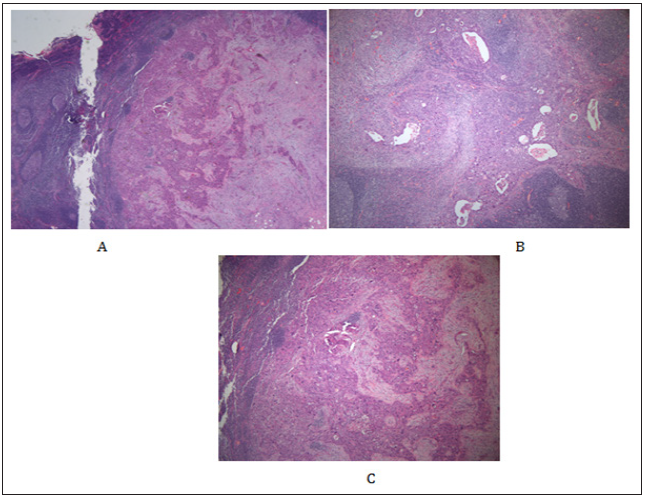 The masses were 2.6cm and 1.0cm from the proximal and distal resection margins respectively (Figure 4). Histological tumour was intestinal type, moderately differentiated tubular adenocarcinoma with areas of papillary well differentiated component (Figure 5). Tumour invaded lamina propria (pT1a). Proximal margin, distal margin and anvil ring were free of tumour with safe margin of 2.6cm proximal and distal of 1.0cm. No squamous differentiation was seen in the gastric cancer. There was no lymphatic, venous or perineural invasion. Immunohistochemistry study of C-erbB2 was negative. A total of 34 LNs were retrieved from the specimen, 15 and 19 from the greater and lesser curvature respectively. None of the LNs contained metastatic deposits of adenocarcinoma (pN0). However, 4 out of 34 (1 from greater curvature and 3 from the lesser curvature) retrieved LNs revealed SCC and were positive for p63 and CK5/6 on Immunohistochemistary (Figure 6). Chest CT Scan done a month after surgery showed mild pulmonary emphysema, left lung had two 2mm sized sub pleural indeterminate nodule and LLL posterior basal segment, subsegmental atelectasis. He received 8 cycles of adjuvant chemotherapy with oral TS-1 60mg. At last follow up two years after surgery, he is completely asymptomatic. CT scan of abdomen showed no evidence of local tumour recurrence and EGD revealed normal esophagus, subtotal gastrectomy state with no evidence of local tumour recurrence.

GC includes all malignant epithelial tumours of the stomach. Adenocarcinoma with various histological types account for 95% of cases. Several rare variant are recognized in the WHO classification including adenosquamous carcinoma and SCC [13,14]. Unusual manifestations of gastric cancer have been reported. These are in the form of unusual histological subtypes, configuration, spread or complication [2-6]. LNs are the commonest site of metastasis in gastric cancer and is a recognized prognostic factor and predictor of disease recurrence [7]. They correlate with location and size of tumour, depth of invasion, histological type and Borrman type [15,16]. The lymphatic drainage of the stomach is complicated and multidirectional but perigastric LNs are the first sites to be involved in early gastric cancers [17,18]. However, cancers from other location such as esophagus, lungs and head and neck regions can also spread to perigastric LNs [8-10]. The present case is an early antral GC pT1a, moderately differentiated tubular adernocarcinoma, Borrman Type1. T1a tumour is defined as tumour invading lamina propria [19]. Despite tumour size of 7.3x4.1cm there was no metastasis deposit of adenocarcinoma in the 34 retrieved regional LNs. Lymph node metastasis in intramucosal early gastric cancer is variable but low [20-22]. However, four out of the 34 lymph nodes had histological and immunohistochemistry features of SCC.

SCC is a malignancy of epithelial origin capable of occurring in ogans that are covered with squamous epithelium. Non-melanoma skin cancer, head and neck cancer, esophageal cancer and nonsmall cell lung cancer account for majority of cases [23]. SCC as a variant of GC is an unusual histological subtype and rare. May occur as primary SCC, adenosquamous carcinoma or as collision tumour of the stomach [2-6]. However, there was no histological evidence of either squamous differentiation of the gastric antral tumour or a primary site of SCC in the resected specimen. Synchronous SCC of the oesophagus and adenocarcinoma of the stomach has also been documented in the literature and primary SCC of the esophagus has been shown to metastasize to perigastric LN [24,25]. However, preoperative and follow-up EGD in this patient did not revealed any pathology in the esophagus and he is completely asymptomatic two years after surgery.

Furthermore, cancers of the lung and the neck region can also metastasize to the perigastric nodes [8,9]. Chest and Abdominal CT Scan as well as PET-CT: F-18 FDG Torso (Skull base to thigh) of our patient failed to demonstrate any lesion in the esophagus, lungs and head and neck region capable of metastazing to the perigastric lymph node in our patient. We believe that adequate diagnostic work-up for CUP has been carried out in this patient. Indeed, FDG PET-CT which was performed for this patient is very useful and sensitive imaging modality for a patient with CUP [26]. Han et al found out that, out of 120 patients with CUP, FDG PET-CT was able to detect primary tumour in 54 representing 42.5% with false positive rate of 7.5% and primary tumour was found in only 5 cases of 60 unidentified cases during clinical follow-up between 2 to 45 months [26]. This case presented a diagnostic dilemma and will add to the existing literature as a case of synchronous gastric adenocarcinoma and metastatic SCC with unknown primary.