Cardiopulmonary bypass (CPB) is associated with common activation of all four integral components of hemostasis, that is, the endothelium, plasma proteins, platelets and fibrinolysis. The causative factors include the presence of an artificial non-endothelial surface of the CPB system, non-pulsatile blood flow, hemodilution, hypothermia, surgical trauma and a systemic inflammatory response to CPB. Microthrombi formation, coagulation defects and hypercoagulability in the postoperative period may occur. The key pathway of activation is platelet binding to collagen via von Willebrand factor, platelet activation and aggregation and formation of an initial hemostatic plug. Thrombin generation (tF+fVIIa →fIXa →fXa →prothrombin →thrombin) activates platelets, fV, fVIII and fXI. Fibrinogen and fXIII stabilize the clot. Fibrinogen bound to the CPB circuit provides a strong binding site for platelets via the GP IIb/IIIa receptor. Bound platelets are activated, promoting further thrombin formation via the PAR-1 receptor. Shed blood, if reinfused, increases platelet activation. Plasmin erodes the clot and directly activates platelet consumption [1-15].

The use of antifibrinolytics preserves platelet activation and reduces platelet GPIb receptor cleavage [16]. Thrombocytopenia during and after CPB is common but an isolated platelet count below 50G/L is usually not associated with serious bleeding if no other hemostasis disorders are present [17]. Platelet function is slightly increased by mild hypothermia and decreased by severe hypothermia. Some commonly used drugs other than heparin; protamine and platelet inhibitors reduce platelet activation or aggregation (NO donors such as nitrates or phosphodiesterase inhibitors such as milrinone). In summary, platelets are one of the most fragile components of hemostasis during CPB. Current cell-salvage techniques are capable of preserving platelets by autologous platelet-rich plasma (PRP) sequestration. The present study tested platelet function during and after PRP sequestration in cardiac surgery procedures using CPB. We hypothesized that platelet count and aggregability would be preserved by the method.

Prophylactic administration of tranexamic acid 30mg/kg i.v. bolus and 15mg/kg into CPB was mandatory. After induction of general anesthesia, 800mL of whole blood was collected from a large-bore (min. 8 Fr) central venous catheter and replaced with an adequate volume of a balanced crystalloid solution. Blood was processed in the Sorin Xtra cell saver (LivaNova, Italy). The manufacturer’s protocol was used (175ml Latham bowl, 2-port sequestration system, CPD-A bags for whole blood collection, Vacutainer EDTA tubes, prime flow 100ml/min with manual reduction to 70mL/min after complete filling, PRP spill flow 20 ml/ min). Red blood cell (RBC) and PRP sequestration was performed simultaneously. PRP was stored at room temperature in the operating theater under an anesthetist’s supervision and always retransfused immediately after CPB before the end of surgery. RBCs were retransfused in the theater if necessary or postoperatively in the ICU according to hematocrit and the clinical situation. The transfusion protocol was guided by the center’s experiences and thromboelastography (TEG 5000, Haemonetics, USA); kaolinactivated plain and heparinase cups were used for each test. Blood samples were collected from an arterial line and processed in the laboratory before surgery, from PRP, after PRP retransfusion and at the end of surgery.

Enrolled in the study were 18 patients for a PRP sequestration group and 12 controls. The demography of both groups was similar (Table 1). There were no differences in major postoperative complications (Table 2) frequency of transfusion therapy (Table 3) CPB parameters, the only exception being a slightly longer maximum ACT on CPB in the PRP group which is clinically insignificant (Table 4) perioperative laboratory parameters (Table 5) and patients’ clinical outcome (Tables 6-8). 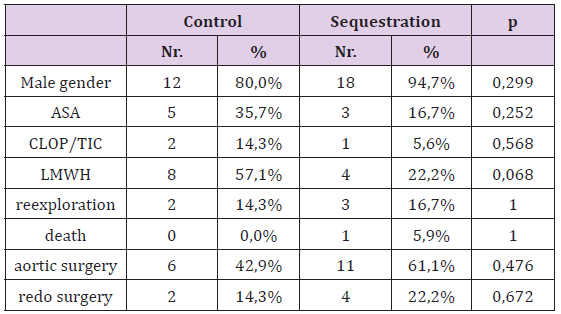 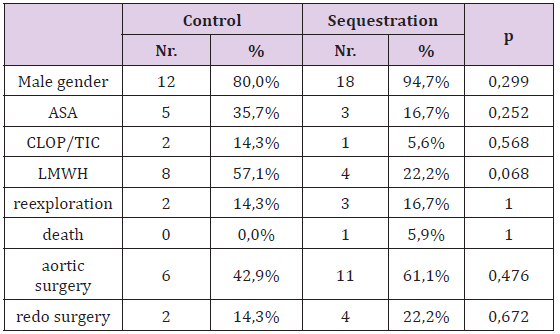 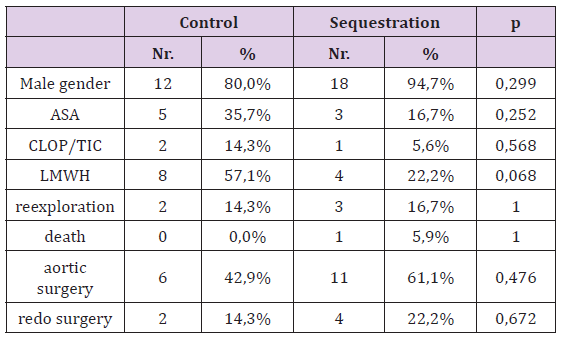 Table 7: Agregation of platelet before surgery (1).

Table 8A: Aggregation of platelet after the end of the surgical procedure (2).

We are fully aware of the fact that the present study is only preliminary, including a small number of patients and reporting our first experience with PRP sequestration. To the best of our knowledge, this was the first study focusing on platelet aggregation in this setting; however, the results are controversial. The technique of PRP sequestration probably did not considerably harm platelets because ristocetin-mediated aggregation was preserved, reaching about 90% of baseline levels. After stimulation of thromboxane A2 (TXA2) and ADP receptors, however, aggregation was rather decreased. This cannot be explained by the effect of antiplatelet therapy since most patients scheduled for valvular surgery received no antiplatelet agents and if yes, it was withdrawn according to the ESA/ESC guidelines. Retransfusion of PRP was associated with mildly increased aggregation after TXA2 receptor stimulation. Even hematologists in our group could not explain the phenomenon of selective preservation of ristocetinmediated platelet aggregation. Further tests of both morphological and functional integrity of platelets will be needed to determine their potential damage.

PRP sequestration may be a safe and useful method in complex cardiac surgery. It preserves platelet count and ristocetin-mediated platelet aggregation and partly restores aggregation mediated by other activators after CPB. Additional future randomized controlled trials may confirm these pilot results.