The Relationship of the 2nd: 4th Digit Ratio to the Maxillary Sinus Volume in Men Volume 5 - Issue 4

Objective: Recently, the 2nd and 4th (2D:4D) digit ratio have been reported to be a non-invasive indicator of intrauterine androgen balance and androgen receptor sensitivity. The maxillary sinus (MS) is the triangular pyramid shaped air filled space found inside the maxilla. Like other paranasal sinuses, MS plays a prominent role in the formation of facial contour. The possible relationship between the MS volume and the 2D:4D ratio in men has been investigated.

Materials and Method: 41 male patients aged between 21-39 years (mean 27±5.24), who had a paranasalsinus (PNS) computer tomography (CT) scan. The MS volume was calculated from the PNS CT scans using the Syngo software. The 2D:4D ratios were calculated by measuring in mm the distance between the end point of the 2nd and 4th digits on the palmar side of the right hand and the lowermost crease (the meta carpophalangeal crease) using a digital caliper. The relationship between these two numerical values was statistically analyzed.

Conclusion: There is a negative correlation between the 2D:4D ratio and the MS volume. This condition reveals the androgenic hormone effect of the sinus volume in the development process. New studies to be done in the future with more number of patients are needed for a better understanding of this relationship.

The paranasalsinus (PNSs) are complex viscerocranium bones filled with air and their structure, shape, and sizes show major individual differences [1]. PNSs expand the bone in which they are located during their development. This development does not take place in a uniform manner and continues at different time periods and different speeds during the period of development [2]. Therefore, PNSs are one of the most variable anatomical structures in the body in terms of size, shape and volume [2]. The maxillary sinus (MS) develops from the mesoderm of the 1st branchial arch. The MS begins to form in the 3rd gestational week and its development lasts until young adulthood [1,3]. The MS is the triangular pyramid shaped air filled space found inside the maxilla. It has 3 recesses and the alveolar recess extends up to the alveolar process of the maxilla in the inferior, the zygomatic recess ends with the zygomatic bone in the lateral and the infraorbital recess ends with the infraorbital surface in the superior [4]. Just as the size and shape of the MS greatly differ from person to person, there are also differences between right and left in the same person [4]. Like other PNSs, MS plays a prominent role in the formation of facial contour and PNS diseases such as sinusitis and cancer occur more [5].

Aside from better understanding these anatomical formations, knowing the size and volume of MSs and the factors affecting their development will be helpful to us in operations such as Endoscopic Sinus Surgery. Thanks to 3D reconstruction, computed tomography (CT) is a perfect radiological method for determining the shape and volume of the MS [6]. Homeobox genes play an important role in the development of the Hoxa and d vertebrae and the urogenital system and these genes also control the development and differentiation of the digits [7]. Recent studies in the literature have suggested digit length analysis as a reliable and non-invasive indicator of prenatal sex hormone exposure [7-14]. There is evidence that the ratio between the length of the 2nd digit (2D) and the length of the 4th digit (4D) differs based on gender and that this is mostly determined in the prenatal period [8]. Unlike women, 4D is longer in men, meaning that the 2D:4D ratio is lower. This ratio is related to the in utero androgen and estrogen balance and is a non-invasive, reliable indicator of this balance [9]. Post-natal 2D:4D ratios are in a negative correlation with the high-level fetal testosterone levels previously measured from the amniotic fluid [10].

There is evidence that in addition to high fetal androgen levels, a low 2D:4D ratio is also related to the increased receptor sensitivity of androgens [9,11]. The 2D:4D ratios have been found high in male patients with androgen insensitivity syndrome [12]. For these reasons, this ratio has been accepted as a retrospective indicator of in utero androgen levels and a sign of the sensitivity of individuals [13]. Although the digits continue to grow with age, this ratio continues to remain relatively stable until young adulthood [14]. The aim of our study is to demonstrate whether there is a correlation between the 2D:4D ratio and the MS volume.

Approval was obtained from the local ethics committee for the study (Ethic Committee Number: b 2016-84). All participants signed informed consent forms. 41 male patients aged between 21- 39 years (mean 27±4.24) who had PNS CT scans because of chronic headaches and in whose PNS no pathology was detected were included in the study. Patients who had a history of previous nasal or paranasal surgery or maxillofacial trauma, had a congenital nasal/ PNS abnormality or had a pathology that could affect pns aeration such as chronic sinusitis were not included in the study. The MS volume was calculated using a computer software with the method Prabhat et al. [15] used in their study.

The routine PNS CT imaging procedure is as follows, in the given order: High-resolution CT images were acquired at 120 kV; 180 mA and rotation time 0,6. The serial image of the 0,1 cm slice with 1-second scanning time was obtained. The volume was measured on a computer with Syngo software (Siemens Healthcare GmbH Henkestr, Germany). After we defined air density threshold to (-1024) – (- 450) Hounsfield Unit, MS volume (V) was calculated using the “Paint on slices” tool on the workstation. To define a volume, the outline of the sinus was traced manually on each slice of the image stack using the on-screen mouse pointer in the axial plane (Figure 1). Once the tracing was complete, the workstation automatically segmented the entire volume of the sinus from the surrounding structures and the segmented portion could be visualized and manipulated in 3D. At this point, switching to the “Histogram” view on the workstation automatically reflected the volume of the sinus in cubic centimeters (cc). 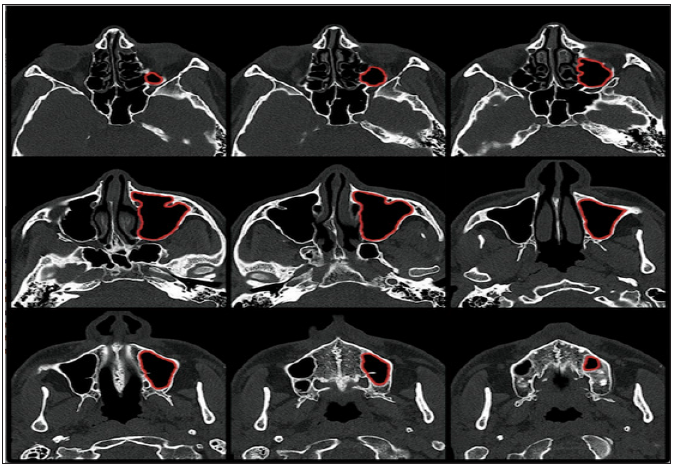 The entire procedure was repeated for the right and the left MSs separately for every patient. Digit-length was measured via a 150-mm digital verniercalliper with a resolution of 0.01 mm. Digit-length was measured like Bilgic et al. [9] who was measure the digit via a digital verniercalliper with a resolution of 0.01 mm. Measurements of the 4th and 2nd digits were made directly on the palmar surface of right hand, from the basal crease to the tip of the digit. If more than one fold was detected at the base of the digit, the most proximal fold was used. To obtain the 2D:4D ratio, the length of the 2nd digit was divided by the length of the 4th digit. The relationship between the 2D: 4D ratio and MS volume were statistically analyzed. Mean, standard deviation, median minimum, maximum, frequency, and ratio values were used in the descriptive statistics of the data. The distribution of the values was measured with the Kolmogorov-Smirnov test. The Spearman correlation analysis was used for the correlation analysis. The SPSS 22.0 (PASW for Windows ®, Rel. 18.0.0. 2009, SPSS Inc., Chicago, IL, USA) software was used for the analyses.

Table 1: The distribution and average values of the data.

Table 2: The 2D:4D ratio and its correlation with the maxillary sinus volume.

Figure 2: An illustration of the relationship between the 2D:4D ratio and maxillary sinus volume.

Figure 3: The relationship between the 2D:4D ratio and maxillary sinus volumes.

In the analyses that he made on 17 male children, Meindl [10] found that children with a lower 2D:4D ratio had more unrefined faces, more masculine and stronger body structures and more active personalities. In the study he conducted on birds, Leoni [17] reported that he could easily assign gender with the ratio between the toes of the birds. It has been reported recently that the morphometric analysis of the MS is a useful and reliable technique for gender assignment [18-23]. Mochlhenrich et al. [18] found the MS volume in a maxilla with complete teeth to be 16.6 mm3 in men and 13.2 mm3 in women in a study they conducted, and they found this difference significant. Similarly, Kanthem et al. [19] looked at the height (infero-superior), length (antero-posterior) and width (medio-lateral) as well as the volume of the MS in their study and demonstrated that these parameters were usable in forensic gender assignment.

They reported that of these ratios, the MS volume has the most reliable ratio in forensic gender assignment with an accuracy rate of 78.38%. There are several similar studies in the literature proving that the MS volume changes with gender difference [18-23]. Fernandes [20] found that aside from gender difference, the MS volume also differs with ethnicity by examining the craniums of the people of Europe and South Africa Zulu. Jun [5] has stated that aside from gender, the MS volume also changes based on age and that the gender difference continues in every age group. Unlike the general knowledge in the literature, Uchida et al. [24] have stated that there is no connection between the size of the MS and age and gender but there are not enough publications supporting this. We found a correlation between a low 2D:4D ratio and a wider MS volume in our study. We believe that this leads facial features to gain a more masculine appearance due to high intrauterine androgenic hormone exposure and thus causing the MS volume, the development of which starts in the intrauterine stage, to get wider.

We believe our study to reveal clearly that the MS volume is affected by androgenic hormones. We believe that understanding the anatomical structure and the in utero and post-natal development dynamics of the MS in a better way will be useful in better identifying pathologies of this region and that this will facilitate our work in determining the treatment strategies. One of the drawbacks of our study is that the 2D:4D ratio was only calculated from the right had digits and the left side was not evaluated. Also, the number of patients included in the study is relatively small. The study was only conducted on males. New studies to be done with more patients are needed for a better understanding of this relationship.

There is a negative correlation between the 2D:4D ratio and the MS volume. This reveals the androgenic hormone effect of the MS volume in the development process. New studies to be conducted in the future with more number of patients are needed for a better understanding of this relationship.