This case report represents a female patient treated with alveolar socket preservation technique using a xenograft bovine bone substitute ‘Bio-Oss®’ and a biological glue ‘PeriAcryl® 90’ over the substitute material as a sealer to isolate the socket. 7 years post loading, implant site showed a perfect stability of both soft and hard tissues. Methods: A 50 year old healthy patient presented a deep horizontal root fracture of the upper right canine, delayed implant placement was indicated, extraction followed by socket preservation technique using Bio-oss and PeriAcryl was performed, After 5 months of healing period, an excellent soft and hard tissues conservation was noticed, implant was then inserted showing a high bone quality and quantity. Seven year follow up period express a perfect stability of the bone cortical margin and the surrounding soft tissues. Conclusions: biological ‘PeriAcryl® 90’ glue may be used as an alternative technique for socket coverage to avoid complications related to gingival graft, coronally advanced flap or barrier membrane.

The reduction of the alveolar bone volume following tooth extraction which may interfere with the implant placement and influence the treatment success of fixed or removable denture regarding function and esthetics, has been very well documented in the literature; Johnson [1] reported that most of the dimensional alterations horizontal as well as vertical of the alveolar ridge took place during the first 3 months of healing. Schropp et al. [2] on their study included 46 patients following single-tooth extraction stated that approximately the loss of two thirds of horizontal and vertical alveolar ridge volume occurred within the first 3 months after tooth extraction. Similar findings were reported on animal histological studies done by Araujo [3] in 2009. Mulitple therapeutic attempts were performed to prevent alveolar ridge resorption; The first was published by Osburn [4] in 1974 who suggested the retention of the root as a primary goal to maximize the stability of the removable prosthesis. Later on, in the mid-1980s “Socket grafting” emerged. Multiple clinical and histological studies evaluating the efficacy of different socket- filling approaches have been conducted by many authors; Artzi et al. [5], Camargo et al. [6], Iasella et al. [7], Barone et al. [8], Darby et al. [9], Aimetti et al. [10], Azizi et al. [11], Festa et al. [12], Barone et al. [13], Cardaropoli et al. [14] and concluded that ridge preservation procedures are effective in limiting horizontal and vertical ridge alterations. As heterogeneity in the use of biomaterials has been suggested (autologous bone, allografts, xenografts, alloplasts, autologous blood-derived products, and bioactive agents), different techniques of socket coverage were reported to isolate the filling material (resorbable/non resorbable membrane associated or not to soft tissue coverage techniques: coronal advancement flaps, free gingival grafts). This case report will describe a new technique of socket coverage using ‘Geistlich Bio-Oss®’ (bovine xenogeneic bone graft substitute, Geistlich Pharma AG, Wolhusen, Switzerland) grafting material as socket filler, and PeriAcryl® 90 (High Viscosity Oral Tissue Adhesive – Glustitch), as sealer.

A healthy 50 years old female patient presented to a private clinic in 2010. The chief complaint was the mobility of a 7-yearold upper right bridge. The bridge involved teeth #13, 14 and 16 as abutments and tooth #15 as pontic and the mobility was perceived 2 months ago.

The unsealing of the bridge and the clinical and radiological examination of the underlying teeth showed a horizontal deep fracture making the canine unrestorable. Treatment consisted of a conventional fixed bridge over tooth #14 and 16 and a single implant placement of the tooth # 13 (Figures 1 & 2). 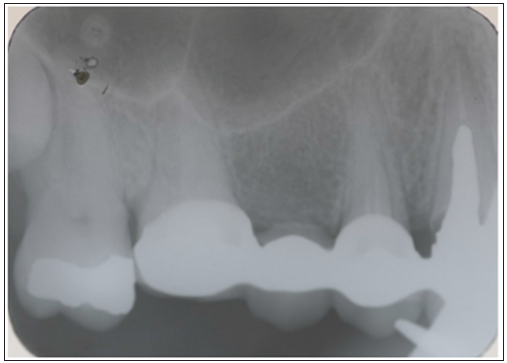 Using periotomes and elevators, extraction of tooth #13 was performed atraumatically, without flap elevation. After examination of the extraction site, performing a socket preservation technique was indicated. The alveolus was then over filled with Bio-Oss® xenograft, and PeriAcryl® 90 adhesive (Figure 3 A-E) was used to retain, stabilize and protect grafting material. Mesial and distal papillas were sutured. For esthetic reason and to provide support for surrounding soft tissue, the previous bridge was temporarily resealed, after transforming the canine crown to a cantilever unit (Figure 4). The patient was adviced to maintain a good oral hygiene using a ‘bass modified’ brushing technique and the use of chlorhexidine (0.12%) mouthwash for 10 days and to avoid the use of superfloss under the cantilever. 5 months later, patient was recalled for clinical reevaluation and implant surgery, a presurgical clinical exam revealed an excellent aspect of soft tissues with the presence of a wide band of keratinized gingiva and a good architecture of dental papillas (Figures 5A-5B).

Figure 3: A-B: After tooth extraction, overfilling of the socket with Bio-Oss®, covered by PeriAcryl® 90’ biological adhesive. C: Simple sutures at the mesial and distal papillas. D-E: temporarily resealing of the previous bridge over the extraction site 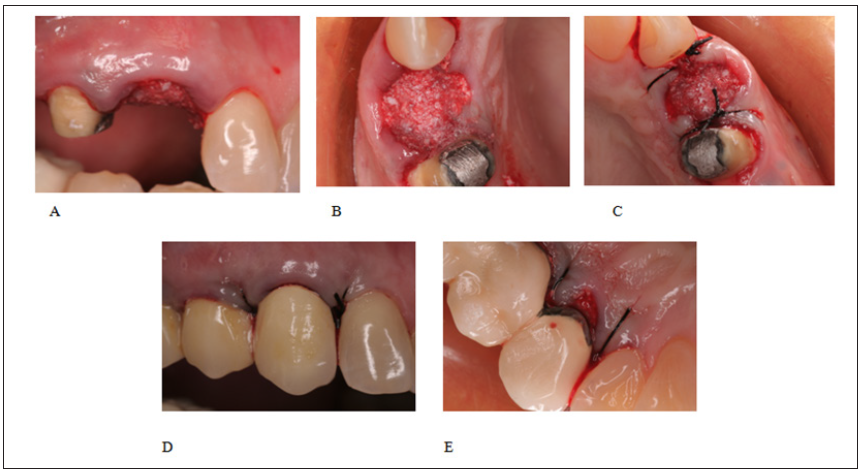 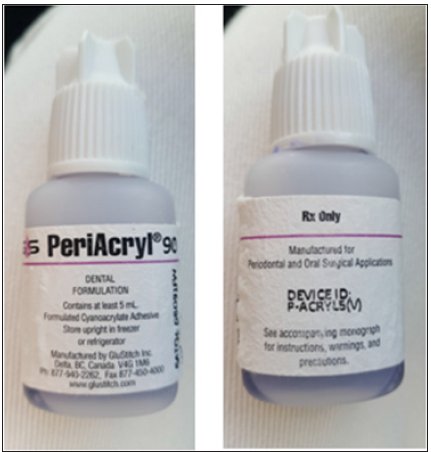 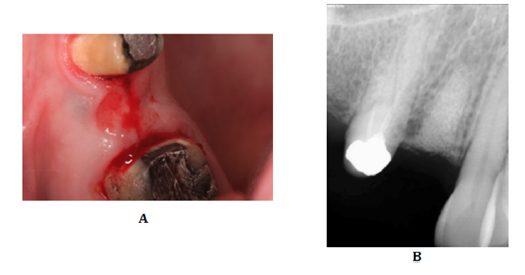 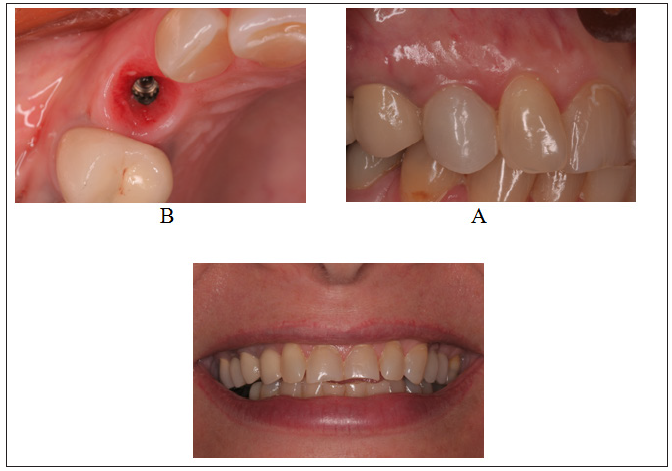 A mid crestal incision was performed; a full thickness flap elevation showed a large width of alveolar bone with respect of buccal alveolar contour, interproximal bone level approximates the CEJ of neighboring teeth. During drilling sequence, the bone matches a class II bone quality according to Lekholm & Zarb [15]. A 4x11mm ‘Astra-Tech’ implant was inserted leaving a minimum of 2mm of buccal and palatal bone, with an excellent primary stability (Figures 6A-6D). 2 months later, a single ceramic crown was performed over the implant abutment and a conventional 3 unit ceramic bridge was done on teeth #14 and #16 with the #15 as a pontic (Figures 7A-7C) After a 7-year follow up period, clinical and radiological examination of the soft and hard tissues showed a remarkable stability around the implant supported prosthesis and the natural teeth (Figures 8A & 8B).

Figure 8A: A: Soft tissue contour 2 months after implant placement. B-C: Photographs after definitive crown placement over the implant. 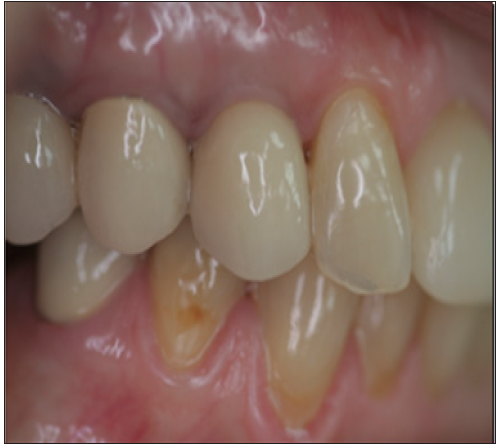 Figure 8B: A: Soft tissue contour 2 months after implant placement. B-C: Photographs after definitive crown placement over the implant.

Over the past decades, biological adhesives were widely used in many medical fields: dermatologic, ocular, and cardiovascular showing promising results. In the changing era of periodontal surgeries, and to meet growing expectations and demands of dental patients, biological glue was introduced to the dental field as an excellent beginner in the era of sutureless techniques. Respecting the isolation principle of socket preservation, ‘PeriAcryl® 90’ biological glue, with its biocompatible properties, was used in this case report, as a sealer over the grafting material. The results obtained were very promising showing excellent healing, total soft tissue adaptation and a perfect bone stability in both height and width dimensions. Within the limitations of this case report and relying on the good results obtained, PeriAcryl® 90 biological adhesive may be considered as one future innovative remedy to the multiple disadvantages of conventional techniques such as the high risk of necrosis of gingival grafts accompanied with patient’s discomfort with a second site surgery, the displacement of mucogingival junction after coronal advancement flap, as well as the high risk of infection and exposure of the membrane. Beside its biological characteristics there was a definite ease of usage on the part of clinician, and early recovery, painless, and priceless on the part of patient.