Pregnane X receptor (PXR) is a nuclear receptor that exists in forms such as PXR1 and PXR2. Activated PXR1 heterodimerizes with retinoid X receptor to increase the transcription of cytochrome P450 3A (CYP3A), a drug-metabolizing enzyme, by binding to the PXR biding site in nuclei. PXR2 is a splice variant of PXR1, which is localized to the nuclei and down regulates the transcription of CYP3A by PXR1. The present study investigated the roles of PXR1 and PXR2 in the regulation of CYP3A11 expression in adult mouse organs and primary cultured hepatocytes. In the liver and small intestine, which show high expression of CYP3A11 mRNA, PXR1 mRNA was highly expressed while PXR2 mRNA expression was low. In the lung, kidneys, heart, and stomach, which show low expression of CYP3A11 mRNA, both PXR1 and PXR2 mRNA were expressed at high levels. In the muscle and spleen, which express little CYP3A11 mRNA, both PXR1 and PXR2 mRNA were expressed at low levels. In primary-cultured hepatocytes, PXR1 mRNA was expressed at high levels on day 0 of culture, and markedly decreased beginning on day 1. PXR2 mRNA was expressed at low levels on day 0, and gradually increased until day 5. CYP3A11 mRNA exhibited a different expression pattern from that of PXR1 or PXR2; expression peaked on day 0 and then gradually decreased. These results suggest that CYP3A11 expression is upregulated by PXR1 and downregulated by PXR2.

Changes in the expression level of CYP3A can alter the effects of many pharmaceutical preparations, affecting drug therapy. The expression level of CYP3A is regulated by nuclear receptors, including pregnane X receptor (PXR) [14-18], Constitutive Androstane Receptor (CAR) [19-21], and Vitamin D receptor (VDR) [22,23]. PXR is known to be highly expressed in the liver [24,25] and small intestine Cheng & Klaassen [26]. This nuclear receptor is typically localized in the cytoplasm in the absence of ligands; however, once activated by ligand binding, it is transferred to the nucleus Glass [3], where it heterodimerizes with retinoid X receptor α (RXR) and activates the transcription of target genes [27,28], by binding to the PXR response elements [16,29,30]. The other main target genes of PXR in addition to CYP3A include uridine diphosphate-glucuronosyltransferase, which has also been implicated in drug metabolism Buckley & Klaassen [31].

PXR has recently been shown to exist as five different subtypes Gardner-Stephen et al. [32] in humans and two subtypes, PXR1 and PXR2, in mice Matic et al. [33]. PXR2 is a splice variant lacking a part of the amino acid sequence (exon 5) from PXR1. PXR1 is considered to have similar functions as PXR, which have been previously reported. PXR2 localizes to the nucleus but inhibits the activated transcription of target genes by PXR1 Matic et al. [33]. PXR1 is transferred from the cytoplasm to the nucleus in a ligand-dependent manner and activates the transcription of target genes, whereas PXR2 is localized to the nucleus and inhibits the activated transcription of target genes by PXR1. A luciferase assay using a CYP3A promoter demonstrated that the activated transcription of CYP3A11 mRNA by PXR1 was dose-dependently inhibited by PXR2 Matic et al. [33]. In most studies to date, however, drug-metabolizing enzymes were analyzed without considering the existence of PXR2, a splice variant of PXR1; thus, the functions of PXR in regulating drug-metabolizing enzymes remain unclear. In fact, it was reported that CYP3A was highly expressed in PXR knockout mice [28,34], suggesting that PXR1 and PXR2 should be analyzed separately. The present study differentiated between PXR1 and PXR2 and investigated the roles of each nuclear receptor in CYP3A expression.

Mice received an intraperitoneal injection of pentobarbital sodium salt (50mg/kg) and were laparotomized under anesthesia. Preperfusion was flushed through the hepatic portal vein for 10min using Micro Tube Pump（MP-1000, EYELA, Tokyo Rikakikai Co. Ltd., Tokyo, Japan), followed by a collagenase solution for 15 min in the same manner as the preperfusion. The liver was then isolated and homogenized in D-MEM to prepare a hepatocyte solution. The hepatocyte solution was filtered through the Cell Strainer (70μm Nylon, BD Biosciences, Franklin Lakes, NJ, USA) and centrifuged (H-18F, Kokusan Co. Ltd., Saitama, Japan) at 500g for 3min at room temperature. After removing the supernatant, the cells were suspended in 30ml of 1:10 diluted HBSS and centrifuged at 500  g for 3min at room temperature.

From 1.0μg of the total purified RNA, cDNA was synthesized using a high-capacity cDNA synthesis kit. For each sample, 2.0μl of 10X reverse transcription (RT) buffer, 0.8μL of 25X dNTP mix, 2.0μL of 10X RT random primer, 1.0μl of Multi Scribe TM reverse transcriptase, 1.0μL of RNase inhibitor, and 3.2μl ultrapure water, which were all included in the high-capacity cDNA synthesis kit, were mixed on ice to prepare the 2X RT master mix. On a PCR plate, 10μl of 2X RT master mix and 1.0μg of purified RNA were added and mixed. The mixture was incubated in an iQTM Thermal Cycler (582BR, Bio-Rad, Hercules, CA, USA) at 25°C for 10min (Step 1), at 37°C for 120min (Step 2), and at 85°C for 10min (Step 3) for the reverse transcription reaction. The reaction mixture was diluted with TE buffer at a ratio of 1: 20 to prepare the cDNA solution.

Note: Organs were isolated from adult mice, and total RNA in the organs was purified and reverse transcripted. The expression levels of PXR1, PXR2 and CYP3A11 mRNA were measured by PCR.

Figure 2: Changes over time in the expression levels of PXR1, PXR2 and CYP3A11 mRNA in primary cultured hepatocytes. 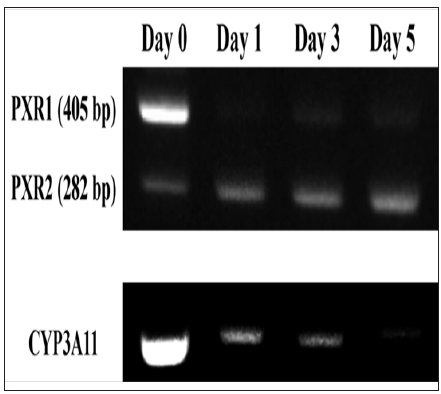 Figure 3: Changes over time in PXR and CYP3A in primary-cultured hepatocytes.

Note: The primary-cultured hepatocytes on days 0, 1, 3 and 5 of culture were fixed and stained using an anti- PXR antibody and anti-CYP3A antibody, to analyze the expression patterns of PXR and CYP3A. 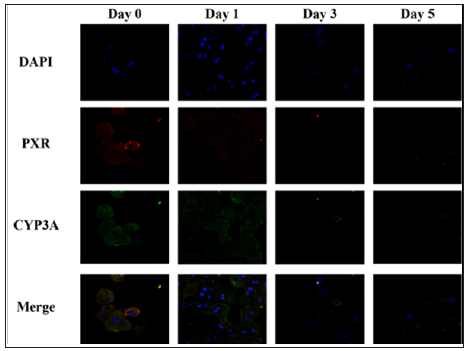 The expression levels of PXR1 and PXR2 were also analyzed on the protein level. Since there are no antibodies that can differentiate between PXR1 and PXR2, an existing anti-PXR antibody was employed. It has been reported that PXR1 is localized to the cytoplasm and nucleus and that PXR2 is localized only to the nucleus; thus, the signals observed in the cytoplasm by immunostaining of primary cultured hepatocytes can be attributed to PXR1 and the intensity of fluorescence signals in the nucleus was produced by a combination of activated PXR1 and PXR2 (Figure 3). Although a definite conclusion cannot be derived only from the results of the present study, the expression of CYP3A is considered to be regulated by the interaction between PXR1 and PXR2. If an antibody that recognizes the 41 amino acid residues present only in PXR1 can be produced, it may be possible to obtain more in-depth information.