The occurance of wound healing complications (WHCs) in the groin after vascular surgery is a serious medical and financial problem. Surgical site infections (SSIs) in the groin are reported with an incidence between 3% and 44%. In up to 6% deep groin infections involve the implanted prosthetic material. Since years case reports and clinical studies report on the effectiveness of the Closed Wound Therapy Incision Negative Pressure (ciNPT) on wound incisions in the groin. The aim of this paper is to review the clinical data of the ciNPT in the treatment of wound incisions in the groin after vascular surgery.

The anatomy of the groin is an important factor in wound healing complications (WHC) after vascular surgery. Due to the presence of lymph vessels and nodes, the proximity to the urogenital organs, as well as its function as a leading access in vascular procedures, postoperatively the groin shows tendency towards wound dehiscence, lymphatic leaks, seroma, hematoma, skin necrosis, tissue infection, and delayed healing [1-7]. Diabetes mellitus, renal insufficiency, overweight, age, malnutrition, operation time and wound length were detected as further risk factors [8]. The incidence of post-surgical site infections (SSIs) in the groin is reported to be between 3% and 44%. Deep groin infections involving the implanted prosthetic material are present in up to 6% [4-11]. SSIs are related to morbidity and correlate with complications such as limb ischemia, extremity loss, massive hemorrhage, systemic sepsis, and septic embolization [1,4,5]. Long hospital stays with high treatment costs are the consequence of SSIs and the accumulation of severe complications [1].

To deal with SSIs many surgical techniques were applied but only systemic antibiotic therapy showed effective treatment results [3-6,12]. Since the development of the Negative Pressure Wound Therapy (NPWT) in the 1990s by Morykwas and Argenta (USA) as well as Fleischmann (Germany), the wound healing process has been enhanced by this method [13,14]. Many case reports and clinical studies reported on the effective use of the NPWT in the treatment of infected wounds as a supplement to surgical debridement and antibiotic therapy; complex open wounds intended for secondary closure; degloving injuries; postoperative sternal wounds; open traumatic injuries; and high-energy trauma wounds [7,14-22]. In the subsequent period successful NPWT was applied on primarily closed wounds with the aim of preventing the wide spectrum of WHC. This new procedure, under the term closed incision negative pressure therapy (ciNPT), has led in abdominal, sternal, traumatic, orthopedic, and plastic surgery incisions to reduction of SSIs since 2010 [23-28].

The success of ciNPT is attributed to its mode of action consisting of protecting the incision from external wound contamination, strengthening the cohesiveness of the wound edges, removing fluids and infectious materials from the wound, decreasing the lateral tension around the incision, and facilitating oxygen saturation and blood microcirculation within the incision area [12,29,30]. At present the Prevena™ Incision Management Therapy System (KCI, an ACELITY Company, San Antonio, Texas, USA) and PICO™ Single Use Negative Pressure Wound Therapy System (Smith&Nephew, London, UK) provide the leading ciNPT systems. Prevena™ consists of a vacuum unit with a battery and a preset negative pressure of -125 mmHg. Additional components are a replaceable exudate collection canister (volume 45 ml), a polyester fabric interface layer with 0.019% silver for the control of bioburden within the dressing, a polyurethane foam bolster, and a polyurethane film with acrylic adhesive. A polyurethane shell encapsulates the foam bolster and interface layer providing a closed system [8] (Figure 1). 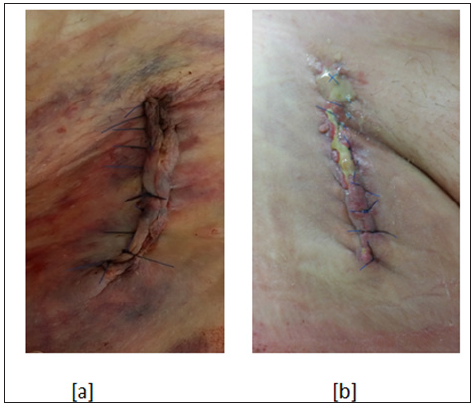 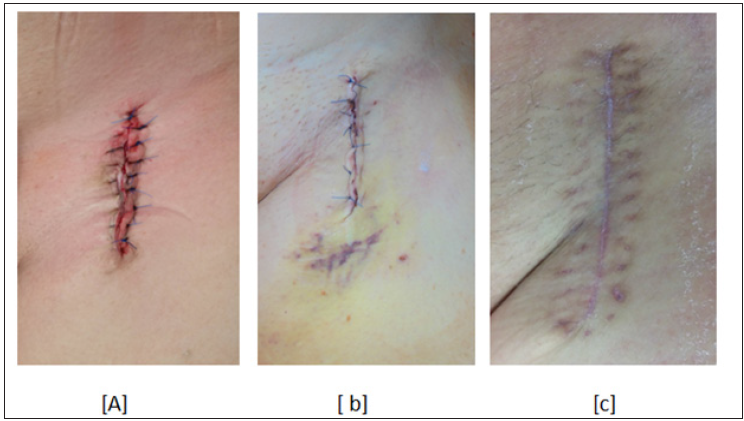 Figure 3: Components of a) Prevena™ and b) PICO™ 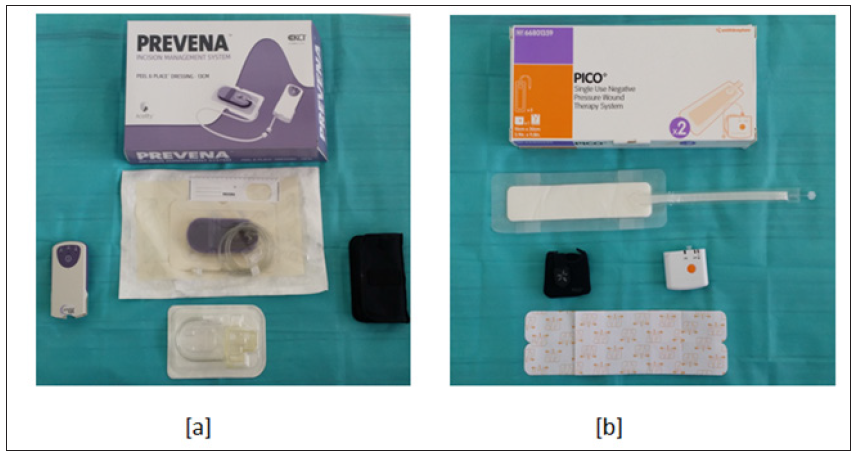 Figure 4: a) Prevena™ and b) PICO™ applied to the groin wound immediately after wound closure. 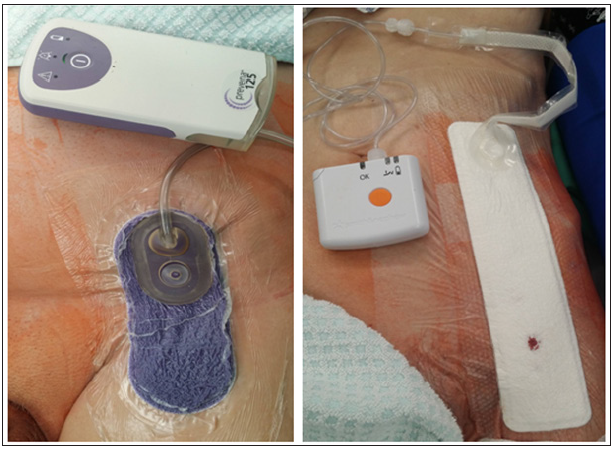 PICO™ consists of a battery powered vacuum unit which delivers a negative pressure of -80 mmHg and a 4 layer multifunction dressing design. Each layer of the dressing has a specific function. The silicone adhesive layer as the nearest to the wound protects the wound environment and decreases pain during the removal. The pioneering airlock layer spreads the negative pressure over the wound surface and enables the movement of secretions through the dressing. The super absorbent core keeps the secretions away from the wound and the top layer film has a high moisture transmission rate. Due to the multi-function dressing almost 80% of the exudate is lost by evaporation and 20% remains in the dressing [31] (Table 1). Despite many publications regarding ciNPT only five clinical studies exist which broach the issue of groin wounds after vascular surgeries. In these studies Prevena™ is the most frequently analyzed ciNPT system [4,8-10,32]. Only one clinical study concerning Prevena™ is based on randomized design including a subgroup analysis of risk factors and perioperative parameters [30]. Clinical studies concerning PICO™ on groin wounds after vascular surgeries are lacking (Figures 2-4).

The first clinical results regarding the effectiveness of Prevena™ in patients with groin wounds after vascular surgery were published by Weir. In a pilot study 8 patients were treated with Prevena™ or a standardized wound dressing respectively after bilateral cut in the groin to perform either a femoro-popliteal bypass, femorofemoral cross over bypasses or Endovascular Aortic Repair (EVAR). After a follow up of 8 months, 2 WHCs (wound dehiscence and hematoma) were noticed in groins treated with Prevena™. Groin wounds with standardized wound dressing showed 3 WHCs (deep tissue necrosis and seroma) requiring revision surgery. A statistical significance was not revealed [10]. Karl and Woeste examined retrospectively the effect of Prevena™ in 28 patients. 14 patients with risk factors such as diabetes mellitus, renal insufficiency and revision surgery were treated with Prevena™ and showed no WHCs on the 7th postoperative day. In the Control-group consisting of 14 patients with approximately the same risk factors treated with a standardized dressing, only one WHC requiring revision surgery was noticed. The patients groups showed no significance regarding either therapy [11].

Statistical significance was proved in the first (p<0.0005) and the second evaluation period (p=0.023). The overall incidence of WHCs in both groups was also statistically significant (p<0.0005). Wound revision surgeries were performed in only 1 case in the PREVENA™-group, whereas in 10 cases in the Control-group. The difference between both groups was statistically significant (p=0.022). The additional subgroup analysis proved a significant effect of PREVENA™ with regard to the wound healing risk factors such as age (p<0.0005), renal insufficiency (p<0.0005), diabetes mellitus (p<0.0005), malnutrition (p=0.043), overweight (p<0.0005) and perioperative risk factors operation time (p<0.0005), wound length (p=0.003), hospital stay (p=0.001), and perioperative blood transfusion (p=0.004) [8].

Against the background of WHCs in the groin after vascular surgeries which cause serious therapeutical and financial problems for patients, physicians and the financial system, appropriate solutions are needed. Thus the introduction of ciNPT as delivered by Prevena™ provides a way of preventing severe postoperative healing courses of groin wounds. In comparison to standardized wound dressing Prevena™ shows in two studies an significant reduction of WHCs in the groin after vascular surgeries [4,8]. Furthermore, a significant effect of Prevena™ could be shown in revision surgeries as well as in wound healing risk factors and perioperative risk factors [8]. Despite the significant results in primary incision groin wounds the effect of ciNPT on revision groin wounds is not yet known. In future prospective clinical studies are needed to investigate the effect of ciNPT on groin wounds after revision surgeries. First promising interim results from the ongoing Aachen Incision Management System (AIMS-) Trial show a significant reduction of WHCs in patients with prior incisions in the groin using Prevena™ (WHCs: PREVENA™ 21,7%; Control- Group 50%, p< 0.001) [33]. In summary, it can be stated that ciNPT is an effective therapy to avoid WHCs in the groin after vascular surgeries.