Background: The port site metastasis in prostate cancer(PCa) after laparoscopic radical prostatectomy(LRP) is an uncommon metastatic pattern of PCa.

Case presentation: We described an 81-year-old male patient who was admitted because of dysuria. Physical examination and imaging study indicated that the port site metastasis in PCa after LRP, and laboratory analysis revealed elevated prostate specific antigen (PSA). The diagnosis was established after tumor resection, and then confirmed by pathology according to immunohistochemical stain. Androgen deprivation therapy(ADT) was given.

Conclusions: Our present case indicated that the port site metastasis in PCa after LRP is rare. Tumor resection is the first choice of treatment and ADT should be performed in case of highly PSA level.

Prostate cancer(PCa) is the first most commonly diagnosed malignancy in men in the Western world and the third leading cause of cancer-related deaths among men [1]. Because of the popularity of prostate specific antigen (PSA) screening, more and more men detected PCa early. Radical retropubic prostatectomy(RRP) is a standard surgical procedure for the treatment of localized PCa. At present, laparoscopic radical prostatectomy(LRP) has been very commend, the operation effect is equivalent to RRP and the complications of the operation are not significantly increased [2]. In 2014, a patient admitted in our hospital who was found the port site metastasis in PCa after LRP. We reviewed the literatures and found that there were few cases of the port site metastasis in PCa after LRP. Therefore, we reported the case and follow-up results.

An 81-year-old male patient with 3-year history of dysuria came to our hospital, who was underwent LRP in the Second Affiliated Hospital of SUN YAT-SEN University in 2005. Unfortunately, the patient was missing follow-up after operation. Physical examination revealed that an egg size, fixed tumor on the right side of the abdomen, and nothing was detected in digit rectal exam. The ultrasonography found that the tumor was located in the subcutaneous tissue with abundant blood supply, and SPECT showed bone metastasis in lumbar spine. Laboratory data suggested an elevated PSA level of 57.92ng/ml. For further investigation, computed tomography(CT) was taken. The CT showed that the tumor with uneven density and reinforcement on contrast-enhanced scan was located in the abdominal muscle layer, which indicated the possibility of metastatic tumor (Figure 1). So, we did a tumor resection, and for relieving lower urinary tract symptoms(LUTS) transurethral resection of bladder neck(TURBN) was performed at the same time. The pathology (Figure 2) suggested that the tumor was adenocarcinoma of the prostate glan.

We suggested that the patient undergo androgen deprivation therapy(ADT) after operation because of the highly PSA level, but the final decision in patient was to oral bicalutamide. The PSA level decreased from the initial 57.92ng/ml to a minimum of 1.6ng/ ml, and then began to up to 8.8ng/ml during that period, so we increased the subcutaneous injection of goserelin release agent based on oral bicalutamide until the PSA level finally decreased to 0.18ng/ml. 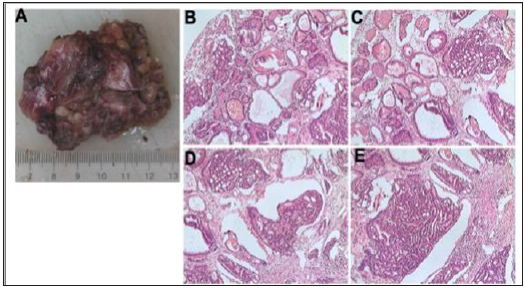 PCa is a common malignancy in men. RRP is the standard treatment for localized PCa because of better tumor-free survival and metastasis-free survival. Researches showed the complications in the perioperative and the rate of tumor control in LRP were equivalent to RRP [3-5]. The most common metastatic sites of PCa were the bone, distant lymph nodes [6], occasional reports of liver [7] and renal [8] metastasis. The metastasis of PCa was closely correlated with preoperative PSA level, tumor pathological grade and clinical stage, involving a large number of genes, pathways, etc., However, the specific mechanisms involved were still unclear. To the best of our knowledge from literature searches, there were very few literatures that reported on the port site metastasis in PCa after LRP. The first reporters were El-Tabey NA and Shoma AM [9], and after they had some similar reports [10-12].

The port site metastasis in PCa after LRP is rare. Tumor resection is the first choice of treatment When it happens, and If local clinical recurrence or distant metastasis occurs at the same time, ADT or radiation therapy should be performed.