There are lots of publications last time about important role of neuroglial interactions in normal physiology of nervous system. Some of them infer that neuroglial interactions may support survival of neuronal and glial cells. Study the mechanisms of neuroglial interactions needs convenient models which are simple nervous system. They could be easily isolated and studied while retain natural neuroglial relations. The purpose of present work was to estimate glia protective properties of giant axons in simple model – crayfish ventral nerve cord, upon photo oxidative stress. To better visualize the axons shape and reveal the periaxonal glial cells, we were filling of the axons with fluorescent label by means of specially devised microinjector. It enabled us to reveal the glial cells which are in close proximity to the axons. Such glial cells were found to have increased survival in compare to more distant ones from the axons under oxidative stress. The obtained data indicate that the crayfish giant axons have glia protective properties, which molecular mechanisms have to be studied.

Study of neuroglial interactions under nerve tissue injury needs adequate models and instruments. Neuroglial interactions may affect the survival of neurons and glial cells [1,2]. So, cell survival rate could be used as an indicator of cytoprotective interactions between neuronal and glial cells. To deepen our understanding of nuroglial interactions it is desirable together with estimation of live/dead status of the cells to have ability to assess neuroglial morphological relations in the sample, because structural intercellular relations provide the basis for the functional ones. Both this tasks seemed us to be done simultaneously with fluorescent microscopy, combining estimation of live/dead status of neuronal and glial cells [3] with cell morphology visualization by direct intracy to plasmic delivery of fluorescent markers using microinjection [4,5]. Thus, the purpose of our largely methodical work was, using nerve tissue preparation convenient for intraneuronal microinjection, to solve two problems:

a) To define axons morphology, and reveal periaxonal glial cells

As a model object to study influence of neuroglial structural relations on survival of glial cells we used isolated ventral nerve cord (VNC) from freshwater crayfish Astacus. Neighboring ganglia in the ventral nerve cord connected by long connectives (up to 2 mm) which include axons of nerve cells enwrapping with multilayer glial sheaths. Among the axons there are two pairs of giant ones go along each connective [6]. Relatively large diameter of giant axons (50 μm mean) made this object well-suitable for microscopy examination. Oxidative stress was generated photodynamically by 30 minirradianion of VNC with laser (670 nm; 0,1 W/cm2) after 1 hour incubation with 1 uM alumophtalocyanine Photosens.

Survival rate of glial cells surrounding the axons in connectives was estimated 5 hours after irradiation by fluorescence microscopy of VNC, which were stained with propidium iodide (PI) and Hoechst 33342 (Hoechst) for visualization of necrotic and living cells [3], respectively. While this fluorochromes could be excited simultaneously by UV light (340-380 nm), they have emission maxima at opposite parts of visible spectra – red and blue, respectively. That makes cell nuclei stained by (PI) and Hoechst easily distinguished. For the giant axons morphology visualization we inject them with solution of quantum dots Qdot 655 (Invitrogen, USA) by specially designed microinjector. As a base of the injector we used Chambers-Kopac construction [7] with mechanical feed of micro capillary. However, since giant axons in VNC surrounded by multilayer glial sheath, for its easier piercing Chambers-Kopac construction was combining with tube shaped piezoelectric transducer, which transmit micro vibration at the injection micro capillary. The frequency provided by pulse generator was 25 kHz. Such ultrasound vibration of the capillary in work on oocytes [8] reduced deformation of plasma membrane and zona pellucida preceding cell puncture.

It was of importance for our case, since piercing of the axons only by manual feeding of microcapillary (without of micro vibrations) produced considerable glial sheaths deformations prior to puncture, and increase risk of through perforation of the axons (microcapillary fed to them manually by approximately 45 degrees angle, (Figure 1). To lower a risk of the microcapillary break during the piercing of mulylayer glial envelope we used glass micro capillary with relatively thick tips (5-10 um diameter). In some cases the tips of the capillary were beveled at 1 μm grade diamond lapping film 662XW (3M, USA) attached to the surface of rotating computer hard drive. Hydraulic system - syringe which was fed by micrometer and connected with the injector by flexible plastic tube with Vaseline oil, was used only to avoid clogging of the сapillary – the solution of quantum dots was in capillary at small positive pressure. The injection itself was provided just by capillary microvibration. Injection was followed by short fixation with glutaraldehyde for preserving structure of preparation. Microscopy was carried out just in experimental chamber using Nikon FN1 fluorescent microscope with 330-380 nm excitation and 420 nm long pass barrier filter cube.

Figure 1: Piezoelectric-enabled microinjector which we devised for visualization of the giant axons. 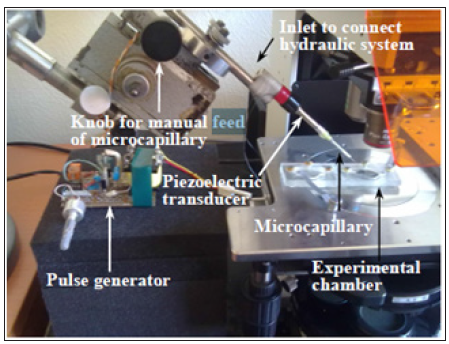 Filling of giant axons with quantum dots Qdot 655 solution made a background at which one should to distinguish live and necrotic cells, stained with Hoechst and PI, respectively. To do this correctly it need spectral detection of fluorescent image or, because in our case PI and Qdot 655 have similar spectral maximums - some other way to quantitavely estimate the level of PI in the nuclei of cells overlaid the axon background. Our approach was as follow. It is known that nuclear stains PI и Hoechst – interact with DNA in different ways: PI –intercallator [9], but Hoechst binds to minor groove of DNA [10]. Despite the stains has different sites of binding to DNA we had noticed that these bindings are competitive. This was revealed in procedure of sequential staining (PI, than Hoechst, as we used in our protocol), when nuclei of necrotic cells with impaired plasma membrane, pre-stained with PI, bound Hoechst in less amounts in compare withliving cells, which were not pre-stained with PI. It was proved by measuring of the blue channel intensity of initial RGB images of cell nuclei (Figure 2). Average intensity of blue-channel pixels for living cells was higher than one for the dead cells (Figure 2D). This observation enabled us to judge about presence of PI in glial nuclei, which overlaid Qdot 655-filled axons, just by comparison of their blue channel intensity with respective values for live (Hoechst-binding) and necrotic (PI+Hoechst-binding) cells in the preparation.

Figure 2: On the approach to define propidium iodide in cell nuclei overlaying the axons stained with Qdot655. A – giant axons (GA) with surrounding glial cells in crayfish ventral nerve cord (fluorescence microscopy). Red – giant axons filled with Qdot 655, blue - nuclei of live glial cells stained with Hoechst, pink - nuclei of necrotic glia stained with PI + Hoechst. By “?” pointed a glial cell overlaid the axon which staining (blue or pink) is not easy to define by the image. B, C – red and blue channels of image A, respectively, in RGB color model. D – average intensity of blue cannel pixels of image of different glial cells: 1- necrotic, 2- live, and 3 - one cell pointed at image A with “?”. The latter glial cell was recognized as alive since average level of its blue cannel pixels was higher then in necrotic cells, but did not statistically different form the level of living glial cells. * - p < 0,05. 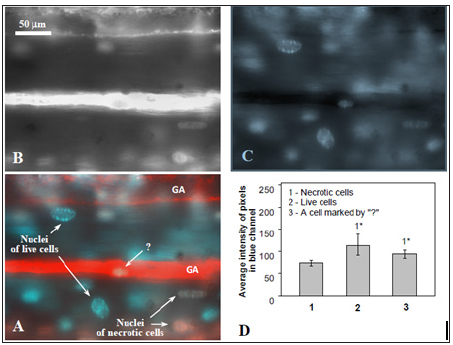 Our piezoelectric-enabled microinjector facilitate piercing of glial sheaths enwrapping giant axons, and promote filling of the axons with fluorescent label without risk of axon damage as a result of overfilling - such thing frequently happen during the injection by pressure. From the site of piercing fluorescent label diffuse in both directions of giant axons, revealing their linear morphology along whole nerve connective (Figure 3A). Quantum dots diffusing along giant axons had reached ganglia, where they revealed more complex structures (Figure 3B). It is interestingly that the dye passed through the ganglia, and visualized at the exit the same linear structures as corresponded to the giant axons at the entrance to ganglia. Fluorescence microscopy after the microinjection visualized shape and borders of the axons better than bright field microscopy (Figure 4). Using this approach we found glial cells with nuclei surrounded by halos, which were obviously formed by ununiformity of the axon surface (Figure 4B). This observation enabled us to consider such glial cells as immersed in the axon surface and having direct contacts with axons. By this data we inferred that such cells being in tight structural relations with axons could also have eminent functional neuroglial interrelation, for example which affected on glial cell survival. 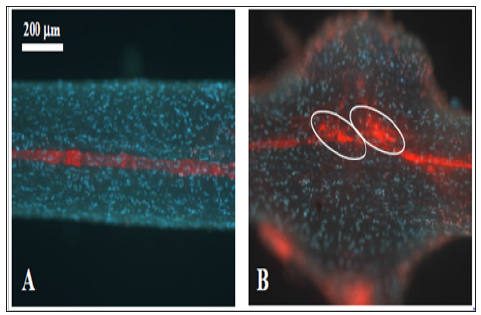 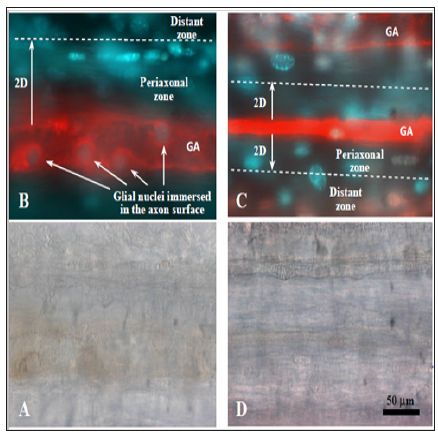 Figure 5: Necrosis of the glial cells at different remoteness from the giant axons (5 hours after photooxidative stress). * -p <0,05. 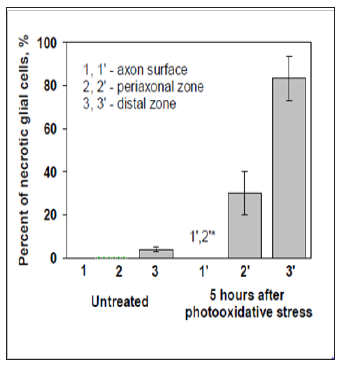 Microinjection technique, which we are used, successfully visualized morphology of giant axons in crayfish nerve cord. Alternative techniques of cell shape visualization within tissues like labeling of cell plasma membranes with lipophilic fluorescent tracers are time-consuming and could take from several days to weeks [11]. Reconstruction of cell morphology using fluorescence of fixative agent - formalin, which tends to accumulate more in intercellular space than in cells, is complicated and needs confocal or ultra microscopy [12]. Our approach of selective axons morphology visualization by microinjection takes just several minutes. The monitoring of the process and final imaging were done with conventional wide field fluorescent microscope.

Using of micro vibrations of the micro capillary for the injection procedure enable rapid diffusion of fluorescent marker along axons and did not need application of extra positive intra capillary pressure, which is not easy to control. First systemic studies of giant axons in the ventral nerve cord of decapods crustacean related to 1920th and name of George Jonson [6]. However, despite long history of study of different aspects of ventral nerve cord anatomy, the questions about location of related to giant axons cell stomata and whether each giant axon incessantly run along whole VNC and belongs to only one neuron (or belong to different connected neurons) are still open. In our study fluorescent marker injected into giant axon prior to ganglion passed it through, revealing at the exit linear shape of axon similar to the axon shape at the entrance to the ganglion. However, just inside the ganglion the marker revealed not a linear pattern, but two neighboring groups of non-linear structures. They could be of axon terminals and dendritic tree of separate neurons which have contacts in ganglion. To obtain more detailed data on morphological architecture of these contacts, as well as for to clarify morphological relations of neuron cell bodies and glial cells in ganglia it will be useful to do confocal or multiphoton examination of the crayfish ventral nerve cord.

Observed phenomenon of increased survival of the glial cells in the direct proximity from neurons’ axons may have several suppositional reasons. In our previous work with slightly different design of experiment [13], where we had seen the same effect in the crayfish ventral nerve cord under photo oxidation, we excluded such possible reasons of the phenomena as lack of photosensitizer and light power in the deep nerve tissue layers near the axons. Therefore the observed effect of increased survival of the glial cells as one approached to the giant axons, could be consequence of glia protective neuroglial interactions in the crayfish VNC. Obtained results seem us of special importance because existing literature on support of survival between neural and glial cells relate mainly to embryonic and neonatal periods of individual development, when nerve tissue are under formation [2,14]. Before, we have already report on neuron-dependent survival of glial cells in stretch receptor of adult crayfish [15]. The obtained in present study data once again indicate to existence of support of survival between neural and glial cells in adult nerve tissue, particularly in freshwater crayfish astacus. The molecular mechanisms of the phenomenon are still to be elucidated.