Background and Objectives: To determine the prevalence of and risk factors for cardiovascular abnormalities of asymptomatic newonset left bundle branch block (LBBB) in elective noncardiac surgery.

Methods: This study was a retrospective chart review about the preanesthetic evaluation center at a medical center in southern Taiwan. The charts of 87,185 patients who underwent elective noncardiac surgery in were reviewed. Patients who showed LBBB in the preanesthetic electrocardiogram were enrolled and analyzed. Patients with positive findings in the preanesthetic cardiovascular examination were categorized into the positive group, while the others were placed in the negative group. Prevalence of asymptomatic new-onset LBBB, risk factors for positive findings, and adverse postoperative outcomes.

Results: The prevalence rates of new-onset LBBB and asymptomatic new-onset LBBB were 0.042% and 0.031%, respectively. Among those patients, positive findings were detected in 64% of preoperative cardiovascular examinations. Age was a risk factor for cardiovascular abnormality; being older than 63.5 years was a risk factor for positive findings in a preanesthetic cardiovascular examination with a sensitivity of 88% and a specificity of 56%. The prevalence of adverse outcomes was 25.0% in the positive group and 22.2% in the negative group (no significant difference).

Conclusion: The prevalence of LBBB in this Asia population was relatively low. It is suggested that preanesthetic cardiovascular examinations should be performed in patients older than 63.5 years.

The etiology of LBBB includes degeneration of the conduction system, chronic myocardial fibrosis, and acute myocardial insult. A previous American College of Cardiology/American Heart Association (ACC/AHA) guideline for the management of ST-segment elevation myocardial infarction regarded new-onset LBBB as the diagnostic criterion for acute myocardial infarction, requiring reperfusion therapy. However, the ACC/AHA 2013 guideline suggested that this should not be considered in isolation, because the diagnosis is complicated and may interfere with ST-segment elevation analysis. However, LBBB can also be seen in asymptomatic subjects, and has been considered benign in young people [3] with the mortality rate increasing in older individuals, particularly compared to those without BBB at baseline [1,4].

The study was started retrospectively after receiving approval from the Institutional Review Board of Chang Gung Medical Foundation (IRB number 201701113B0). Patients who visited the preanesthetic evaluation center in our hospital from December 2013 to November 2016 were reviewed, with their data collected if the preoperative ECG showed LBBB, defined as a QRS duration of >120 ms. The definition of new-onset LBBB included the first presentation of LBBB in ECG, LBBB without previous occurrence, LBBB without appropriate assessment, and no known LBBB. Patients who were scheduled for cardiovascular surgery were excluded. Following the suggestion of Miller’s Anesthesia 8th edition, a consultation with a cardiologist was arranged for new-onset LBBB patients if the surgery is not urgent and patient agreed. The surgery would be scheduled after completing the cardiovascular examination; if the patient did not complete the cardiovascular examination, the reason would be identified in the medical record.

Many cases of asymptomatic LBBB are associated with dilated myocardial disease or chronic hypertension, and so the presentation of cardiomegaly in a preoperative chest X-ray was recorded to evaluate the predictive value of myocardial-dilation-associated LBBB. Data from cardiovascular computed tomography angiography (CCTA) were also available for some patients. The results of chest X-rays and CCTA were also interpreted by an experienced radiologist who was blind to patient allocation and the results of a statistical analysis. Any disagreements in interpretation were resolved by discussion with the original interpreter. In accordance with the classification criteria in a recent guideline [7], postoperative outcomes including myocardial infarction, myocardial injury, arrhythmia, cardiac arrest, stroke, acute kidney injury, pneumonia, infection, and ileus were followed for 6 months.

The primary outcome was the prevalence of asymptomatic new-onset LBBB in elective noncardiac surgery. The secondary outcomes were the predictive factors for positive findings in a preoperative cardiovascular examination in these patients and follow-up postoperative outcomes.

The Pearson chi-square test was applied to nominal and ordinal variables. Fisher’s exact test was performed due to the smallness of the samples. The odds ratio was calculated if a significant difference was detected. Student’s t-test was applied to continuous variables. A receiver operating characteristic (ROC) curve was used to determine the most appropriate cutoff age. Values were considered statistically significant when p < 0.05. 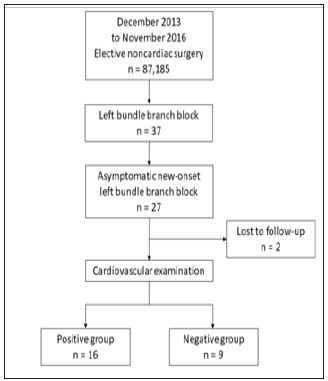 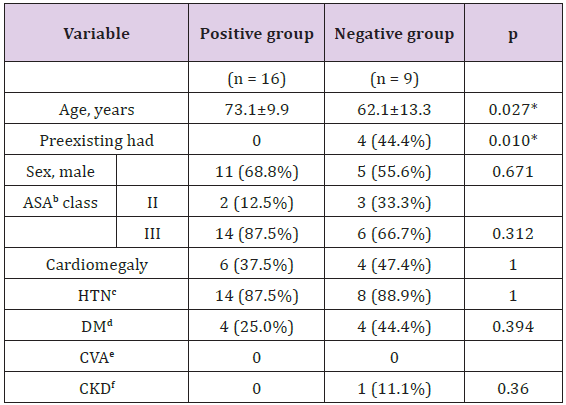 Table 1 lists the demographic data for the positive and negative groups. There was no significant intergroup difference in sex, ASA physical status, cardiomegaly in chest X-rays, hypertension, diabetes mellitus, cerebrovascular accidents, or CKD. However, age was higher in the positive group than the negative group (73.1±9.9 versus 62.1±13.3 years [mean ± standard deviation], p = 0.027). There was no preexisting heart disease in the positive group, but this was present in four patients in the negative group (p = 0.01). There were no perianesthetic cardiovascular events in either group. Figure 2 shows the ROC curve for age in predicting positive findings in preanesthetic cardiovascular examinations. The area under the receiver operating characteristic curve (AUC) was 0.79. An age cutoff of 70.5 year’s old yielded sensitivity and specificity values of 69% and 78%, respectively; the corresponding values for a cutoff of 63.5 years were 88% and 56%. There were four adverse postoperative outcomes in the positive group: one case of acute coronary syndrome and three cases of congestive heart failure. Two adverse postoperative outcomes occurred in the negative group: one case of acute coronary syndrome and status post coronary artery bypass graft and one death (data not shown). Although the adverse postoperative outcomes did not differ significantly between the two groups, both groups had high incidence rates (25.0% in the positive group and 22.2% in the negative group, p = 1.000).

To the best of our knowledge, this is the first study to investigate the prevalence of asymptomatic LBBB in noncardiac surgery in an Asian population. From the database of 87,185 patients, the prevalence of new-onset LBBB in noncardiac surgery was 0.042%, while that of asymptomatic new-onset LBBB was 0.031%. The incidence did not differ significantly with sex: 51% in men and 49% in women. In the literature, 23 cases of LBBB over a 10-year period have been reported for a Japanese surgical population [8]. The incidence of new-onset LBBB in surgical patients was 0.20% in an American population, and was higher in women than in men [9]. These findings suggest that the incidence in Asia is much lower and does not have a sex difference in comparison with the American population. In our database, 80% of 37 patients were free of chest pain and exhibited an acceptable functional capacity. Sex differences might not exist in all Asian populations.

There was a high rate (64%) of positive findings in the preoperative cardiovascular examinations in our study, despite all patients being free from chest pain and exhibiting an acceptable functional capacity. In clinical practice, anesthesiologists struggle with the dilemma of making decisions in consultation with cardiologists due to the accidental finding of new-onset LBBB. New-onset LBBB has been related to acute coronary syndrome and may mask the presence of ST-segment abnormalities [5]. In addition to postoperative mortality, LBBB has been also associated with postoperative myocardial infarction [9,10]. The intraoperative transformation to complete atrioventricular block has also been reported [10]. Our study found that the rate of positive findings varied with age, with an AUC of 0.79. Being older than 63.5 years was associated with positive cardiovascular findings with a sensitivity of 88% and a specificity of 56%. We therefore suggest that patients older than 63.5 years with asymptomatic new-onset LBBB should receive further cardiovascular examinations in noncardiac elective surgery. LBBB has a prevalence of 25% in dilated cardiomyopathy and increases the mortality rate [11]. However, cardiomegaly in preoperative chest X-rays did not have a predictive value in the present study.

This study was subject to some limitations. First, the sample was small, which may lead to bias. The incidence of LBBB may be lower in Asians, and the study only focused on asymptomatic new-onset LBBB. Some patients refused a cardiovascular examination and were lost to follow-up. Second, this study had a retrospective design and did not involve comparisons with another ECG population. Third, the postoperative outcomes were only followed for 6 months. Further long-term data collection and follow-up of LBBB patients are needed.

The authors would like to thank Hsing-Fen Lin, Master of Sports and Recreation, Chung Cheng University, for his kind help in statistical analysis.