The use of conventional intraosseous implants may be limited or inapplicable in restoring some edentulous spaces due to various anatomical reasons. The Cortically Fixed at Once approach (CF@O) uses the remaining cortical bone to fix specially designed implants. This implant system was developed to meet challenges in patients with severely resorbed jaw bones. The CF@O protocol requires no bone graft, no sinus lift or nerve displacements. The CF@O implant system consists of several types of components specifically developed for different locations in the jaw. These components are Pterygoid implants, compressive implants and hybrid plates. The Pterygoid implants and the Hybrid plates are developed to be placed in the posterior zones of the maxilla. The compressive implants with specific macro- and micro-threads are used in the cortical and spongy bone, mostly in the frontal bone of the upper and lower jaw. The hybrid titanium plates are thin, lightweight and highly flexible, which allows them to be adapted to any bone anatomy and fixed with osteosynthesis screws. The presented case reports describe the surgical and prosthetic steps followed for the functional restoration of an edentulous patient with the CF@O implant system. Rehabilitation of difficult edentulous cases is achieved within a short period of time. CF@O incorporates the whole range of treatment procedures available to the implantologist, and it is a reliable alternative where there is substantial bone resorption.

Rehabilitation of edentulous space improves the facial appearance, restores the masticatory function and reinstates a good occlusion [1,2]. The use of conventional implants in the rehabilitation of edentulous space has been discussed extensively in the literature [1-4]. It has been shown that the quality and quantity of bone available at the implant site are very important local patient factors in determining the success of dental implants [5]. However, conventional implant systems may be limited or inapplicable in restoring some edentulous spaces due to various anatomical reasons. Such reasons include extremely resorbed alveolar bone with insufficient height, e.g. < 10 mm, and width, e.g. < 6 mm, for conventional implant placement, or when the bone is so resorbed that even the smallest commercially available implant cannot be fitted without previous reconstruction procedures. There may be insufficient space between adjacent edentulous teeth for the use of a conventional implant or the presence of neurovascular bundles that make implant placement impossible [2,6-8]. In these situations, an alter native implant system for the restoration of such cases is required. Such a system must be able to circumvent the limitations of the conventional implant system.

The Cortically Fixed at Once approach (CF@O) is an example of such an implant system designed to treat difficult cases. CF@O uses two principles for finding additional bone support in situations where conventional implant systems are deemed inappropriate.

The Two Principles Are

a) The use of additional bone support at a certain distance from the treated location in the mouth. This is the case in the situation of the pterygoid implant which encroaches into the pterygoid plate and for the hybrid plate which can be adapted to the remaining bone anatomy at the Zygomatic arch, Premaxilla, and Palate, in the Maxilla and fixed with osteosynthesis screws.

b) A second principle is a modification of the implant surface and implant thread so as to make maximal use of the remaining cortical bone enhanced by using compressive implants.

The CF@O protocol requires no graft, sinus lift nor nerve displacements. A typical treatment scheme of an edentulous solution for the upper jaw makes use of any of the following:

a) Two pterygoid implants (L + R) in the dorsal region

b) Two hybrid plates in the left and right molar zone

c) Eventually, if there is enough bone, four to six compressive implants in the frontal zone (Figure 1).

If there is insufficient bone in the frontal region two additional hybrid plates can be used instead (Figure 2).

In the lower jaw typically two hybrid plates are used dorsally, combined with four compressive implants in the front (Figure 3).

a) Reduced bone volume in the upper and lower jaws such as stage D or E according to Lekholm and Zarb classification of bone quality (1985) [9].

The CF@O implant system consists of several types of components specifically developed for different locations in the jaw. Pterygoid implants, compressive implants and hybrid plates. The Pterygoid implant and the hybrid plates are developed to be placed in the posterior regions of the maxilla. The compressive implants with specific macro- and micro-threads are used in the cortical and spongy bone. The hybrid titanium plates are thin, lightweight and highly flexible which allows them to be adapted to any bone anatomy and fixed with osteosynthesis screws (Figure 4). The following case reports describe procedures where CF@O was used to rehabilitate edentulous jaws. 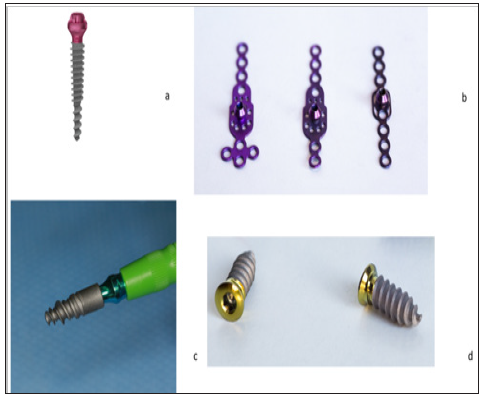 Patient 1 is a 66-year-old non-smoker, a male, who presented at the clinic with a reason to get fixed teeth in the maxilla and mandible. A clinical examination showed an edentulous upper arch with a resorbed ridge, and the lower arch showed few teeth with periodontal disease. Radiographic examination using an orthopantomogram showed an edentulous upper jaw with moderate vertical bone resorption in the front and severe vertical resorption in the premolar and molar region. In the lower jaw several teeth were present in the frontal region and in the left lateral region. Most of the teeth show a moderate to severe bone loss suggestive of chronic periodontitis. There is periapical radiolucency around teeth 44,33 and 37. Figure 5 shows the panoramic radiograph of the patient at presentation. 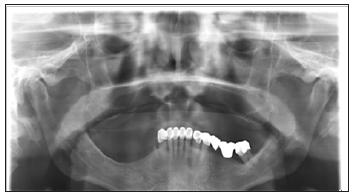 Treatment Plan: In the lower jaw, a complete tooth extraction was advised. From a prosthetic point of view, the patient desired a fixed prosthetic solution. In the lower jaw sufficient root implant was provided to place a fixed bridge. For the upper jaw a combination of two pterygoid and four hybrid plates was proposed. The patient agreed to this treatment plan. In the maxilla, an open flap was made from the left tuberosity along the crest till the canine region. The flap was reflected on the vestibular side in positions 26 and 27 of the zygomatic arch; flap was also reflected in the palate. Pterygoid implant P35/20mm was inserted at the left pterygoid plate. Two hybrid plates HENGG-2 (Highly efficient no graft gear) were fixed at positions 23 and 25. The plates were fixed with osteosynthesis screws and covered with MatriboneR. The procedure was quite similar for the right side. A plate HENGG-2 was installed in position 12 and another plate HENGG-1 at the zygomatic arch. The flap was then closed on the left and right with polytetrafluoroethylene polymer (PTFE) monofilament non-absorbable suture.

After an implant placement, the first bite registration was done with the old prosthesis of the patient. Then transfer coping was inserted and an impression was taken with silicone immediately after the surgery. In the same session, the mandible was operated.

The periodontally involved teeth in the lower jaw were extracted and an immediate implant placement was done. One-piece implants (length 8mm and diameter 4mm) were inserted one each in the region of 33 to 36 and the region of 43 to 46 with a minimum torque of 50N. In the front region, implants of 14mm length and 3.5mm diameter were directly placed in the extraction socket and others were inserted flapless (Figure 6). After surgery, an impression was taken with transfer coping in place. A temporary bridge was fabricated on the chair side for the mandible and fixed with temporary cement. Four days after the framework, a try-in was done and a new bite registration was taken. A laboratory technician was present at this session to decide the smile line and aesthetic outlook. A framework of metal and hybrid teeth (half-resin–half-ceramic) was chosen for the maxilla in order not to overload the bone. In the mandible metal–ceramic was chosen (Figure 7).

Figure 6: Surgical procedure and implant placement in the maxilla (a,b,c) and mandible (d,e,f). 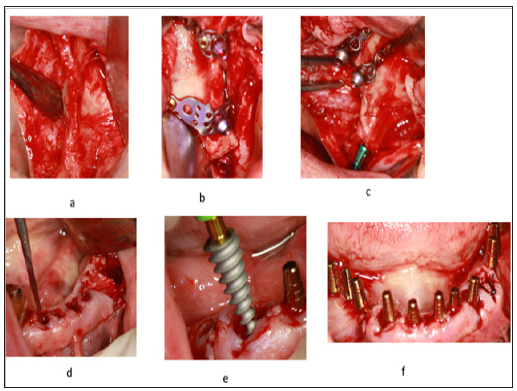 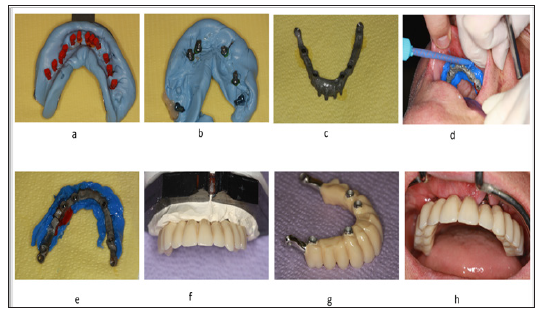 Five days after the try-in an appointment for prosthesis delivery was given. In the maxilla the bridge was screwed, and in the mandible the bridge was fixed with temporary cement (Figure 8). The patient was reviewed after 2 weeks. Thereafter, patient was scheduled for follow-up at 3 months and then every 6 months. Patient 2 is a 63-year-old non-smoker who wanted teeth fixed in the mandible. Patient presented with a complaint of mobile lower teeth. Clinical and radiographic examination showed gross mobility of lower teeth with generalised bone resorption (Figure 9). Patient was scheduled for total extraction of mandibular teeth and immediate implant placement in positions 46 and 47.

Figure 8: Panoramic radiograph of patient at completion of treatment. 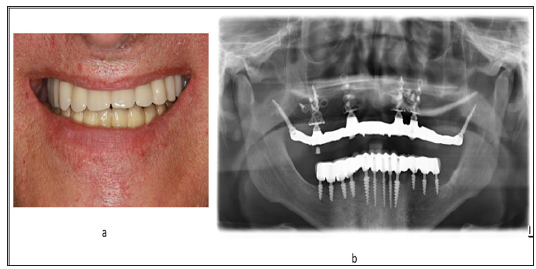 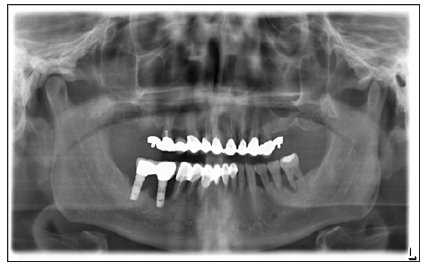 At surgery, the mandibular bone was reshaped and debrided following total extraction; thereafter, one-piece implants of 4mm diameter and height from 8 to 12mm were inserted in positions 34, 35 and 37. In positions 32, 33, 41 and 43, one-piece implants of 3,5mm diameter and 14mm length were inserted with a torque of 50N. The remaining gap between the implants and the extraction socket was fulfilled with grafting material (MatriboneR). Next, in the remaining mandibular bone, a hybrid plate HENGG-3 was installed and fixed with five osteosynthesis screws. After the implant placement, a silicone impression was taken with a transfer coping in place (Figure 10). A temporary resin bridge was made at the chair side and fixed on the mandible with temporary cement. Four days later the framework was tried-in, and 5 days later a metal-ceramic bridge was delivered—half-screwed and half-cemented on the mandibular implant. A check-up was done 2 weeks later and then every 6 months afterward (Figure 11). 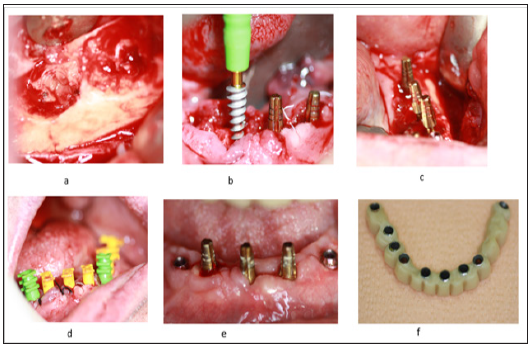 Figure 11: Panoramic radiograph of patient 2 at completion of the treatment. 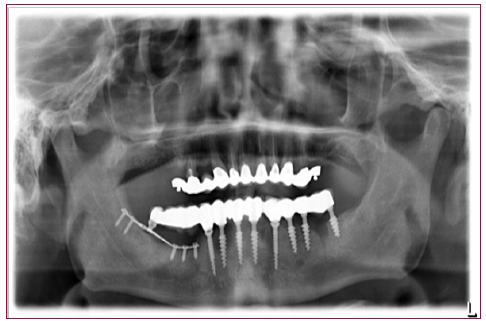 Cortically fixed at Once implant system consists of specially designed plates suitable for extremely atrophic regions as well as screw implants of varying lengths to treat different difficult cases [10]. CF@O uses the concept of tricortical support anchorage; it uses the available residual bone volume for support. The high fatigue strength of the solid titanium implants (without any welds or added parts) is particularly indicated for mechanically demanding situations (the canine and zygomatic sectors of the maxilla) and the mandibular ramus. CF@O has a well-established protocol which allows immediate loading with the restoration of function and aesthetics within a few days10. In this way severe atrophies may be rehabilitated within 10 days with a fixed denture. This is a relief to patients who used to be rejected for implant treatment and for those who for many reasons cannot wait for months to have a complete treatment. Where traditional implant methods take several months to complete, the CF@O approach achieves the same result in days without the need for additional surgery.

The CF@O approach incorporates the whole range of treatment procedures available to the implantologist, and it is a reliable alternative to bone grafts in situations where there is substantial bone resorption. No bone graft and no more sinus lift for the rehabilitation in cases of atrophied maxilla and mandible are needed. The presented case reports describe steps followed for the functional restoration of an edentulous patient with CF@O implant system. Rehabilitation of seemingly difficult edentulous cases was achieved within a short period of time.