The Mechanisms of Training on Innate Immune Cells

The trained innate immunity was originally studied in plants, which are lack of adaptive immune responses. The immune responses of plants were divided into systemic acquired resistance (SAR) and induced systemic resistance (ISR) according to different inducing factors and pathways. When secondary infections occurred in plants, both SAR and ISR could produce strong non-specific immune responses to the pathogens, which were persistent or even permanent [17]. Recent evidence showed that the SAR of plants was mainly regulated by chromatin remodeling and epigenetic modifications. Those immune mechanisms of plants provided important insights into the molecular mechanisms of trained immunity in mammalians.

Some research progress has been made on trained immunity in mammalians. Mice vaccinated with BCG showed enhanced pro-inflammatory cytokine production in response to secondary pathogenic infections, and that was attributed to the trained immunity of NK cells and monocytes. The BCG-induced trained immunity depended on phagocytosis and the recognition of MDP through intracellular NOD2 receptors. Through NOD2 receptors, Rip2 kinase was activated and further the activated kinase promoted an epigenetic reprogramming through histone tri-methylation at H3K4 (H3K4me3) (Figure 1) [18]. The epigenetic programming induced by BCG in vivo could persist for more than one year [19]. In addition to the BCG-induced H3K4me3, training induced by C. albicans or β-glucan was also associated with epigenetic modifications, particular stable changes in histone tri-methylation at H3K4 and histone acetylation at H3K27. Further mechanism studies identified two crucial signal pathway in the trained immunity induced by C. albicans or β-glucan. One was the non-canonical Raf-1-dependent pathway, which can be activated by C-type lectin receptor Dectin-1. The other was the cAMP-PKA-dependent signal pathway. Besides, trained innate cells exhibited great changes in the cellular metabolisms, as the genes involved in glucose and amino acids metabolisms were unregulated [10]. More specifically, training with β-glucan resulted in a Dectin-1/Akt/mTOR/HIF-1α pathway activation that switched cellular metabolism from oxidative phosphorylation to glycolysis (Figure 1) [20]. Trained by C. albicans or β-glucan, murine monocytes or macrophages became more capable of producing inflammatory cytokines, as well as improved ability of phagocytosis and killing pathogens [21]. 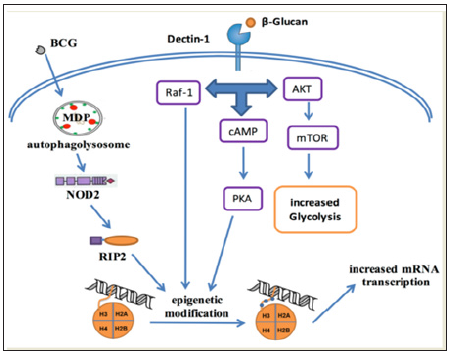 The reveal of trained innate immunity has updated our understanding of immune memory. In the NK cells, monocytes and macrophages, after training by various antigens, epigenetic changes/ modifications and rewiring of gene transcription occurred, which may lead to immune memory. This feature of innate cells could bring benefits to the host, such as protection against infectious pathogens or reversion of some tumor processes. Discovering new immune adjuvants based on the theory of trained immunity is a promising strategy to conquer infectious diseases [22]. Nevertheless, further studies concerning trained immunity in different diseases are still needed [23], which will benefit the discovery of new therapeutic agents?