Background: Spondyloarthritis is a non-infectious autoinflammatory disease affecting the spine, peripheral joints and may be asociated with skin, enteral and eye manifestations. Progressive vertebral inflammation is dominant in this heterogeneous clinical picture which develops with different frequency and severity in genetically predisposed persons expressing the HLA B27 histocompatibilty antigen. Classical bone erosions and fusions can be demonstrated by X-ray, however in a longer latent clinical phase.The correct diagnosis and starting innovative biological treatment is crucial in prevention of the late changes, In order to avoid delay diagnostic criteria and screening tools have been developed for the early clinical phase defined as non-radiographic axial spondyloarthritis. In the hierarchy of screening steps the clinical signs, i.e typical inflammatory back pain and other manifestations are the basis rationally followed a traditional X-ray image of the sacroiliac joints and the HLA B27 typing is the rational sequence. However, according to an international multi-center surveypreference of MR imaging is common just in the screening phase.

Method: The aim of our study was the health economic analysis of screening non-radiographic axial spondylarthritis with the assumption that the cost of the proper diagnosis of a case is lower following the algorithmic sequence is lower compared to that on MRI basis. Simplified cost minimization, cost-effectivity and cost-utility calculations have been performed using case numbers of two published and our own patient populations.

Results and Conclusion: Moderate cost reductions as 209 or 503 euros savings and 103 Cost-Effectiveness Ratio (ICER) or cost-utility ratios may be achieved using the recommended algorithms.

Spondyloarthritides represents a musculoskeletal disease group characterized by sterile inflammation in the structures connecting vertebrae, cartilagineous and synovial joints and ligamental insertions, called entheses.The inflammation is induced by alive pathogens, pathogen associated molecular structures (PAMPs) or self-tissue destruction and is maintained primarily by intercellular messengers, cytokines. A strong genetic association and risk for the development of the disease was found with the histocompatibilty anCRPtigen HLA B27 or similar structures playing a role in the rec ognition of pathogens. A similar pathological process is involved in skin (psoriasis), bowel (inflammatory bowel diseases, IBD) and eye (uveitis) diseases, which are frequently associated with spondyloarthritis [1]. Several diagnostic and classification criteria for the spondyloarthritis, or seronegative spondylarthritis entity have been developed based on the very heterogeneous clinical pictures in the last decades. This entityincludes classical ankylosing spondylitis, peripheral inflammatory arthritides, as psoriatic arthritis or spondylitis and postinfective/reactive arthritides and criteria for their identification were reviewed, summarized and evaluated recently [2].

The relatively slowly progressing vertebral inflammation (axial manifestation) may remain unidentified for years and this causes a delay of the appropriate and nowadays effective treatment with biologicals [3]. The main cause of the delay that there exists a long period from the first symptoms till the development the characteristic X-ray changes which is defined as non-radiographic axial spondyloarthritis. Today it is generally accepted that this includes a more heterogeneous group of patients with mild disease who never develop the classical axial disease and cases with a long-lasting early phase. The spondyloarthritis concept and development of ASAS criteria (Assessment of SpondyloArthritis international Society, for peripheral and axial spondyloarthritis) significantly decreased the delay in the diagnosis of axial spondyloarthritis (axSpA), from 8-14 years to 5-6 years [4,5]. The key of the early diagnosis is the proper screening by all physicians, who are aware of the relevant phenomena of spondyloarthritides [6-8].

Newer ASAS-endorsed screening algorithms recommend sequencing identification of the inflammatory character of back pain (IBP, nocturnal pain relieving by movement)) and other SpA features of skin, gut or eye, then performing sacroiliac X-rays and in the case it is negative, HLA B27 testing (SPACE) [6,9]. Authors developed in parallel but independently a very similar algorithmic screening with consecutive steps of recommended pre-screening at general practitioner level (low back pain, inflammatory back pain and serum C-reactive Protein, CRP),collaborating specialists’ level (gastroenterology, opthalmology, dermatology, if necessary) and confirmative steps at rheumatologist level including X-ray imaging and HLA B27 typing, (Figure 1) [10]. However, the international MAXIMA survey showed, that academic and practicing rheumatologists report over 90 percent use of MRI compared to the less preferred X-rays and HLA B27 testing [11]. We initiated the study reported here with theworking hypothesis that sequential screening based on inflammatory clinical features, and then standard saroiliacal X-ray followed by HLA B27 and MRI only after,the clinical arm is cheaper and cost-effective. In order to prove this we tested our screening algorithm and performed a simplifiedheath economy analysis of identifiying non-radiographic axial spondylarthritis cases. 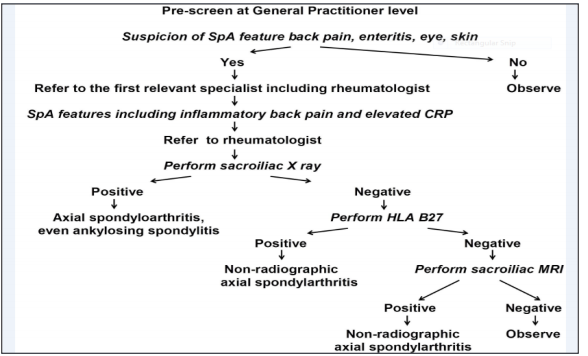 Patients: Out of 49 patients with suspected inflammatory back pain 18 were classified as axial spondylarthritis cases on clinical IBP and elevated CRP in our previous study testing our screening algorithm [12]. Definite ankylosing spondylitis was diagnosed by erosive X-ray SI changes. Ten patients had more SpA features with negative SI X-ray classified as non-radiographic axial spondylarthritis cases. Three of them was HLA B27 positive. However, four patients showed consistently low level CRP.

Health Economy Calculations: Cost minimization, cost-teffectivity and cost-minimzation calculations have been performed. The calculations were made in a model using the case numbers reported in the MAXIMA study [11], in the SPACE cohort for the ASAS crteria modification [6] and in our cohort. Costs have been calculated by pricing of the interventions in the mentioned surveysresulting one nonrad-axSpA diagnosis as the effectivity/utility measure as this opens access to biological therapy. For the comparison nonrad-ax- SpA diagnoses have been projected to 100-100 screened persons, respectively. Comparative costs have been based on the Hungarian prices of interventions containing amortisation and work costs expressed in euros. For calculations of Incremental Cost Effectivity Ratio (ICER) the usual formula was used as Ca-Cb/Ea-Eb, where C is Cost, E is effectivity, a is the MAXIMA, b is the SPACE or our own screening system. Utility measure was the same, as savings are identical for cost-utility calculation.

In the SPACE model 209, in our one 523 euros may be saved for an identified axSpA case. In incremental cost-effectiveness (ICER) calculations, access to a TNF inhibitor was used as a theoretical effect measure, and acceptable ICERs have been found in the SPACE model and in our own (103 and 80,respectively). In cost-utility calculations utility measure was the theoretical mean health gain of a three-month anti-TNF treatment of a nr-axSpA case, and similar results have been found.

Cross-sectional studes have shown that among the identified axial spondylarthritis cases there is a less progressive subpopulation, probably an early phase or milder subtype: nonradiographic axial spondylarthritis, i. e. without structural changes in the spine. However they are also candidates of anti-TNF therapy as the other classical cases [13,14]. The screening algorithms differentiate a heterogeneous axial spondyloarthritis population with characteristic back pain, absence of structural changes on imaging, with or without clear inflammatory signs on sacroiliacal MRI, with or without an elevated CRP, less impaired functional capacity, higher female and lower HLA B27 prevalence. (Significant part of them, diagnosed mainly on the clinical arm, show no progression into ankylosing spondylitis even for years. A recent and continuous debate discuss whether the entity is an independent one or it is a developmental stage on the progression of ankylosing spondylitis [15,16].

However, the disease burden on non-radiographic axial spondylarthritis is comparable to the radiographic axial spondylarthritis or evento ankylosing spondylitis and so biological treatment is beneficial. Because of the better functional state, less comorbidity and additional costs anti-TNF treatment ofnon-radiographic axSpA patients is more cost-effective [17,18]. Referral studies show that general practitioners, gastroenterology, dermatology and ophthalmology and even rheumatology specialists present limited awareness on screening modalities [19].

We matched the numbers and prices of the reported diagnostic interventions for a definite diagnosis in the MAXIMA survey, the ASAS SPACE cohort and our screening and used the cost-minimization, cost-effectivity and cost-utility calculations. Our conclusion is, thatmoderate, however real cost reduction may be achieved when clinical signs, sacroiliacal X-rays and HLA B27 testing are used for identifiying axial spondyloarthritis cases, even non-radographic phase. Extensive sacroiliacal and vertebral MRI is recommendedfor thejudgment of state and progression of axial spondylarthritis, rather than for screening. Asnr-axSpA patients clinically are usually eligible for starting anti-TNF therapy, their follow up for progression into ankylosing spondylitis and determining the real health gain receiving the biological is recommended.