Mature cystic teratoma of the ovary is the most commen benign ovrian tumor. Malignant mature teratomas(MCT) is rare, occurring in only 1% to 2% of cases, the main transfer pathway is the spread and direct infiltration of the abdomen, and Lymph node metastasis is rare. So far, there only 2 case of apocrine adenocarcinoma arising from a mature teratoma has been reported in the English literature. We report the first known case of an apocrine adenocarcinoma arising within an ovarian mature cystic teratoma which with pelvic lymph node metastasis. The patient recurrent during postoperative chemotherapy, similar to malignant teratoma in malignancy, different from MCT but similar to cutaneous apocrine carcinoma and the apocine carcinoma of breast in the way of transfer.

A 46-year-old woman was admitted to the emergency department on Nov. 14th 2015 with the complaint of “palpable right lower abdomen mass with abdominal pain for 3 days”. Her past menstrual periods were regular, LMP: 2015-10-12, gestational history: 2-0-3-2, the last parturition was 13 years ago, with subsequent IUD contraception. Pelvic examination: a 10 * 8 * 8cm cystic mass could be palpated at the left side of the adnexal area, with clear border, poor activity and tenderness; no obvious abnormality was found at the right side, but with tenderness and rebound tenderness. Pelvic MRI (3T) scanning: a giant solid-cystic mass was found to the upper left side of the uterus, it was polycystic with clear edge and nonuniform internal signal, the largest diameter was about 12 * 11cm; pelvic fluid was detected; thus, malignant tumor deriving from the left adnexa with pelvic fluid was diagnosed. Laboratory examinations: TSGF: 66.4 U / ml, CEA: 6.07U / ml, CA125: 59.02U / ml, CA15-3: 49.03U / ml, CA19-9: 7.02U / ml, CYFRA: 48.42U / ml, NSE: 21.56U / ml, CA72-4:> 300U / ml. According to the pelvic and auxiliary examinations, it’s more likely to be malignant ovarian carcinoma, so we carried out “laparotomy”. Intraoperative findings: a giant pelvic cyst originating from the left ovary was found, irregular shape, like three kinds of tumors’ fusion; one part of it was like hemorrhagic cysts, about 5cm in diameter, the right side was teratoma with a diameter of about 4cm. Bottom of the cyst was a cauliflower-like mass, about 4cm in diameter. The overall mass was solid- cystic with broken surface surrounded by old clot. The tumor adhered firmly to pelvic peritoneum, uterine wall and rectum; The uterus was in a normal size, but several hard nodules could be palpated from the postuterine wall to Douglas pouch, ranging about 4cm; right ovary increased, its size was about 5 * 4 * 4cm with irregular shape, smooth surface and intact wall; metastatic nodular lesions could be found at both paracolic sulci and part of the mesenteric surface. Postoperative pathology: cancer tissue could be found within left adnexa and marked pelvic lesions. Left adnexa: malignant transformation of ovarian teratoma, presenting apocrine carcinoma-like differentiation. Right adnexa: infiltration of apocrine carcinoma, mainly because of the metastasis from left side. Cancer metastasis could be found within 1/11 marked left pelvic lymph nodes; no metastasis was found within 5 marked lymph nodes at the right side and the omentum majus. Immunohistochemical results: GCDFP-15 (+), AR (+), P53 (+), Ki-67 was about 50%, CK7 (+), CK20 (-), Villin (-), GHTA- ), PAX-8 (-), CDX2 (-), ER (-), P63 (-), CK5 / 6 (-), P16 (-), her2 (-) (Figure 1), supporting the diagnosis of ovarian apocrine carcinoma. Postoperative diagnosis: malignant transformation of ovarian teratoma-apocrine carcinoma IIIc stage.

Postoperative reexamination of tumor test series: TSGF:75.9U/ ml，CEA:2.22U/ml,CA125：14.49U/ml,CA15-3：15.50U/ml, CA19-9：7.61U/ml, CYFRA:16.44U/ml, NSE:21.05U/ml, CA72-4 ：21.93U/ml. The postoperative TP regimen (paclitaxel liposomes 300mg + nedaplatin 120mg, intravenous chemotherapy) was applied for 6 cycles, before the 6th cycle , auxiliary examination results showed: CA72-4: 22.49U / ML, CA125: 9.46U / ML, enhanced CT scanning for the pelvic and abdominal cavity: a block of slightly lower-density shadows with ambiguous border could be found within caudete lobe of the liver, lesions were unevenly enhanced with radiocontrast, the largest one was 2.6 * 3.7cm (Figure 2a); small cystic low-density shadow with clear border was found in the upper pole of the spleen, lesions could be slightly enhanced with radiocontrast; a small increased- density nodular shadow with clear border was detected within uterine area, its diameter was about 2.1cm and could be enhanced with radiocontrast; multiple lymph nodes were found in retroperitoneal and pelvic cavity, the largest one was about 1.1cm in diameter . Thus indicated the recurrence of the tumor, since there was no enhanced CT or MRI scanning for the liver (before operation) and pelvic cavity (after operation), it’s difficult to evaluate the chemotherapy by simple tumor-marker examination without imaging information; the patient completed the sixth cycle of TP regimen. 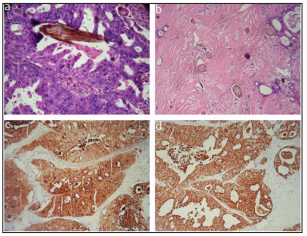 Figure 2: CT scanning first revealed recurrence of the tumor and metastasis (about 38.37*26.85mm) to the liver (Figure 2-a); before third-line chemotherapy, CT scanning showed multiple quasi-circular low-density shadows within the liver and spleen, most metastases could be slightly enhanced with radiocontrast.

This patient was transferred to Fudan University Shanghai Cancer Center because of the progress of the disease, she was advised to recieve PC regimen (Paclitaxel-albumin 200mg d1, 100mg d8 + carboplatin 500mg d2). Laboratory examinations after 2 cycles of chemotherapy: blood: WBC: 2.19 * 109 / L, neutrophils: 1.06 * 109 / L, GGT:469U/L, AST:83 U/L, ALT:52 U/L , indicating II degree of myelosuppression and III degree damage of the liver function. After the application of Ruibai(G-CSF) and other liverprotection medications, myelosuppression was significantly improved while liver function was still abnormal that possibly caused by carboplatin, then a single paclitaxel liposome (albuminbinding paclitaxel 100mgd1, d8) was chose for the subsequent chemotherapy. After 3 cycles, liver function recovered a lot than before, 1 cycle of PC regimen (Paclitaxel-albumin 200 mg d1, d8 + carboplatin 400 mg d2). Reexamination of enhanced CT scanning for the abdominal and pelvic cavity: the liver is larger with scattered slightly lower-density nodular shadows inside, this nodules were in different size and with unclear borders, margins were mildly enhanced with radiocontrast; a quasi-circular low-density shadow was found within spleen, about 3.7cm in diameter and the margin could be slightly enhanced with radiocontrast; multiple irregular soft-tissue-density shadows were found in retroperitoneal , abdominal and pelvic cavity, they had unclear borders and could be unevenly enhanced with radiocontrast, perihepatic and pelvic fluid was also detected; line-like shadows with high density was found in rectal area see. Tumor-markers: CA15-3: 25.60U / ML, CEA: 5.87ng / ML, CA125: 100.1U / ML, CA72-4: 255.3U / ML. Considering the chemotherapy resistance, second-line protocol (bevacizumab 400mg ivgtt + gemcitabine 1.4g d1, d8) was chose, but chemotherapy side effects like diarrhea, abdominal pain and hypoproteinemia appeared after 2 cycles. These adverse effects were eventually relieved after symptomatic and supportive treatments’ application. Enhanced CT scanning for peritoneal cavity: metastatic tumors in the liver were more and larger than before, slightly increased in the spleen; intra-abdominal metastases had no significant changes than before while there was increased ascites (Figure 2b-2d). Tumor-markers: CA15-3: 22.22U / ML, CEA: 5.12ng / ML, CA125: 172.2U / ML, CA72-4: 230.5U / ML prompted the further development of this disease, and then the secondline chemotherapy was replaced with docetaxel 60mg d1, d8 + Lobaplatin 30mg d2. The disease was currently progressing rapidly because of the chemotherapy resistance, and there have been multiple metastases of pelvic organs and lymph nodes, especially the diffuse lesions within liver and spleen. ECOG score was 3 points.

Since the degree of malignant transformation of ovarian mature teratoma is normally high, there are no unified standards of postoperative adjuvant therapy for it yet. So far, operation is still the first choice as no other therapeutic protocol has been proved to be more effective. Given the special metastasis of this tumor, which can infiltrate directly and implant on peritoneum, paraaortic lymph nodes and pelvic metastases should be carefully and thoroughly resected after radical hystero-oophorectomy, postoperative radiotherapy or chemotherapy can be applied according to patients’ condition. Palenzuela et al. [3] argued that comprehensive staging for operation assisted with postoperative chemotherapy can bring more benefits for patients with Malignant Ovarian Germ Cell Tumor (MOGCT). For the treatment of patients with stage above Ic, some scholars believe that chemotherapy for malignant germ cell tumors should not be used as adjuvant therapy but select different regimens depends on the origin of the tumor 2. Unfortunately, there are no specific chemotherapy regimens for apocrine adenocarcinoma yet.

Postoperative diagnosis of the patient admitted to our hospital: ovarian apocrine adenocarcinoma deriving from mature cystic teratoma, stage IIIc. Due to involvement of the right ureter, ureteral anastomosis and Double-J stent placement were performed during the operation. Repeated urine occult blood made it not suitable for radiotherapy. PEB (cisplatin, etoposide and bleomycin) regimen is appropriate for ovarian germline tumor, but this patient presented characteristics of epithelial tumor for lymph nodes metastases were found in intra- and postoperative pathology. Then chemotherapy regimen which usually for ovarian epithelial tumor was applied as the supplementary treatment, while tumors still tended to be recurrent, refractory and resistant to chemotherapy. Progression of the disease was finally out of control despite five chemotherapy regimens were used successively. At present, enhanced CT and MRI scanning of the pelvic as well as abdominal cavity showed multiple organs, lymph nodes and peritoneal metastases, no metastasis to the lung was identified with enhanced CT scanning of thoracic cavity. Metastases to distant organs and lymph nodes were not clear for the patient’s refusal to PET-CT examination.

Besides, there is no postoperative enhanced CT or MRI examination of the pelvic and abdominal cavity, evaluation of the chemotherapy can not be made based on pre- and postoperative imaging information even with tumor-markers examination which is not so reliable. So whether the current recurrence of such ovarian apocrine adenocarcinoma was from the incomplete resection during operation, or the tumor was insensitive to chemotherapy is still uncertain. Poor prognosis of this patient may be associated with the following factors:

a) Ovary is a pelvic organ comparing to the breast, direct invasion and implantation of the tumor are more likely to happen, surgical removal of the tumor requires higher technical skills;

b) It had already developed into IIIc stage at the time of surgery, multiple organs had been involved;