A 20-year-old soldier without history of major trauma experienced subtle lower back pain for 2 years since 2008. Half a year prior, he suffered from shortness of breath with near-syncope for several minutes after standing guard in 2010. A series of examinations did not show any specific findings, except a low PaCO2; hyperventilation syndrome was considered. Due to intermittent subtle lower back pain, he was referred to our rehabilitation clinic for help on 2010/10/12. Physical examination revealed pain during trunk extension and poor balance when standing on a single leg. Plain X-ray films of the lumbar spine showed bilateral spondylolysis of the fifth lumbar vertebra, together with grade I spondylolisthesis, and the ensuing computer tomography confirmed the lumbar pathology (Figure 1). 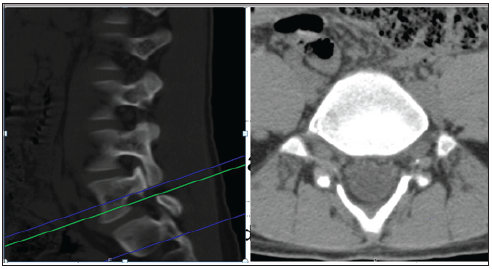 Physical therapy, including modality intervention (short wave diathermy and interferential current therapy), was prescribed for his back pain. During rehabilitation, the back pain worsened and shortness of breath with cold sweat developed. Thereafter, the duration and frequency of hyperventilation increased several times during rehabilitation therapy, but laboratory data of blood and electrolytes were normal at every examination. Considering the risk of hyperventilation and the likelihood of falling down and acquiring an injury, we discontinued rehabilitation and instead prescribed analgesic medication and local injections. Thereafter, the lower back pain improved progressively, and no further hyperventilation attacks were reported.

Spondylolysis is frequently observed in radiographic films as a defect in the pars interarticularis of the vertebral arch and may either occur asymptomatically or be associated with significant lower back pain [6]. The clinical manifestations of symptomatic spondylolysis include focal back pain that may or may not radiate into the buttock or proximal lower limbs [7]. The onset of pain can be gradual or start after an acute injury, and mild symptoms can present for some time following an acute exacerbation [8]. Painful pars lesions are more common in young athletes than other populations [9]. The observation that the duration and frequency of hyperventilation increased during rehabilitation therapy in the patient presented here is of interest. The patient experienced worse back pain and subsequent hyperventilation during rehabilitation, which may be attributed to physiological dysfunction induced by modality therapy. With respect to modality therapy, an increase in body temperature due to thermal therapy or a change in mechanoreceptors due to electric stimulation may have contributed to the development of hyperventilation. However, it is difficult to confirm this hypothesis, because no similar case has been reported in the literature.

Various explanations have been proposed for the anatomical origin of lower back pain and lower limb pain associated with lumbar spondylolysis with/without spondylolisthesis. Detail study regarding lumbar fibrocartilage masses of scar tissue at the site of pars fracture, presence of nociceptive free nerve endings and mechanoreceptors has been confirmed, and those are assumed to sense position and movement [10]. Additional features in the nerve endings of lumbar facet joint capsules have been demonstrated by using morphological and quantitative methods, and these features are quite different from those found in fibrocartilage masses at the site of pars lesions [11]. The complex of facet joint, pars and adjacent soft tissues is richly innervated by the medial branches of the dorsal rami. The facet capsule contains low-threshold mechanoreceptors and nociceptors, which can be hypersensitized by an inflammatory process [7,12], that alert the brain to undue stress in joint-related tissues.

We believe that the nociceptors surrounding the pars could be hypersensized by stress or chronic derangement, like our case. Figure 2 demonstrates a possible mechanism for the relationship between hyperventilation and spondylolysis. Therapeutic interventions for spondylolysis vary, but complete bony healing of the lesion site is the final goal. Many authors have recommended activity restriction for spondylolytic patients [13,14] and some suggest anti-lordotic bracing to maintain lumbar lordosis [15]. Improving the dynamic stability and fine control of the lumbar spine, which may be achieved by the strengthening of core muscles, hamstring stretching, pelvic tilts, and specific stabilizing exercises, has been advocated by others [16].

Figure 2: Schematic model of the interaction between hyperventilation and spondylolysis. 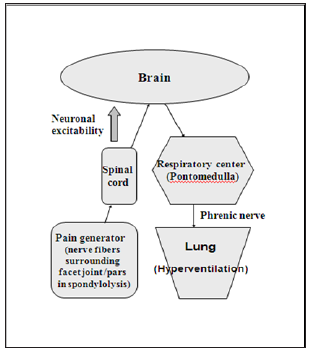