We report subtelomeric deletion of 20q13.33 andduplication 22q13.33 resulting from unbalanced de novo translocation t(20;22) (q13.33;q13.33) in 6-year-old girl with mild mental disability, speech delay, behavioural problems, growth delay, microcephaly,minor dysmorphic features,detected by MLPA and SNParray. Deletion spanning 1,6 Mb included, apart from ARFGAP1 and MYT1, genesKCNQ2 and CHRNA4, which are linked toautosomal dominant epilepsy.Duplicated area included genes RABL2B, ARSA and SHANK3 spansapp. 190 kb and is associated with autistic spectrum disorders, severe speech impairment,ADHD andschizophrenia.Whereas the terminal deletion of 22q is known as Phelan McDermid syndrome, the duplication of the same region is not so frequently reported. Subtelomeric 20q deletions are rare, and deletions resulting from translocation were reported only in a few cases. We review the clinical and behavioural phenotype of subtelomeric20q deletion and 22q duplication.

Subtelomeric rearrangements contribute to idiopathic mental insufficiency and human malformation, sometimes as distinct mental retardation syndromes. However, for most subtelomeric defects characteristic clinical phenotype remains to be elucidated. With the use of modern techniques, such as molecular karyotyping (aCGH) or multiple ligation-dependent probe amplification (MLPA), chromosome abnormalities can be identified in individuals with nonspecific symptoms, such as developmental delay, in whom no particular disorder is suspected. In “genotype-first” approach, individuals with similar genotypes or genetic constitution can be detected, and typical phenotype, or collection of clinical features can be determined.We describe a patient with subtelomeric 20q deletion and 22q duplication. Our report can contribute to characterization of the clinical picture of subtelomericmicrodeletion20q and 22q microduplication.

The propositus was the second child of nonconsanguinous, healthy parents; the mother was 28 years old and father 33 years. Pregnancy was uneventful; delivery was at 38th week gestation; Apgar score was 10-10-10, birth weight 2805 g, length 46 cm and head circumference 33 cm (10thpercentile). Paediatrician noted the first signs of developmental delay (motoric delay) at 3 months of life. The propositus underwent physiotherapeutic interventions according Vojta and then Bobath concepts. At one year, she was diagnosed with truncal hypotonia and developmental delay. At two years on clinical examination, there was persisting hypotonia, growth deficiency, developmental delay and hyperreflexia of lower extremities. At three years, speech delay and behavioural problems (affective behaviour andnegativistic behaviour, moodiness, frustration/rage if the things go in other than her way, she requires attention) were noted. She was showing a speech delay, but the hearing loss was ruled out. MRI scan (four years and 7 months) showed a structurally normal brain with slightly expanded space of temporal lobe of the right ventricle.

At five years, she used to say up to 20 words, after that she used simple sentences. She used to smear the stool on her body and the bed linen. At five years and eight months, she was referred to our Medical Genetics unit because of speech delay, mental insufficiency and failure to thrive. She was still suffering from enuresis. Growth parameters were as follows: weight 18 kg (-0.93 SD), height 110 cm (-1.2 SD), OFC 47 cm (-2.64 SD). She was not willing to tolerate physical examination (from any physician). Clinical examination shown presence of flat occiput, slightly posteriorly rotated ears, otapostasis, almond shaped eyes, slight inner epicanthal fold at the left and prominent pinna (Figure 1). She actually looks like her younger sister. She had clinodactyly of the 4th digits of lower limb but no major dysmorphic features. At this time (8 years and 4 months) she still has the intermittent problem with enuresis but she is getting better. Her mental status matches moderate mental disability.

Figure 1: Photographs of the patient at age 5years eight months. 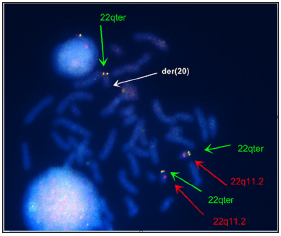 Some signs of autistic spectrum disorder are present. She repeatedly uses some sounds to satisfy herself. She repeats new favourite sentences evenin the inappropriate situations. Behaviour is frequently negativistic and aggressive, she has a tendency to react like “ see no evil, hear no evil”, she turn back on mother and pretend, that the mother is not in the room. She is obstinate and impatient; e.g. she is obsessively asking about planned appointments. She may have an elevated level of pain sensitivity -she uses to stare at TV in a rigid position (knees bended to the chest), and she is squeezing her thighs without pain reaction.

Metaphase chromosomes preparations from a peripheral blood lymphocyte culture were obtained according to standard procedures. Chromosomes analysis was carried out on GTG banded chromosomes at a resolution of 550 bands. For MLPA (Multiplex ligation-dependent probe amplification), DNA was extracted from peripheral blood by standard salting out methods. The telomere kits (SALSA MLPA P036 and P070- Telomere 3 and 5)(MRC - Holland) were used for screening of subtelomeric rearrangements in the sample and SALSA MLPA P245 Microdeletions and P343 Autismkitfor confirmation of duplication22q13.33. Procedureswere performed according manufacturer´s protocol. SNP array (HumanCytoSNP-12v2.1, Illumina, Inc., San Diego, CA)and FISH with probes JAG1(Alagille)/qter (Cytocell) and probe DiGeorge VCFS TUPLE 1/22q13.33 (Cytocell) were used for confirmation of the MLPA results.

Figure 2: Relevant genes involved in translocation of chromosomes 20 and 22 (https://decipher.sanger.ac.uk).

We report a case of de novo 1.6 Mb subtelomeric deletion of chromosome 20q13.33 and duplication of chromosome 22q13.33 as a result of unbalanced chromosomal translocation in the patient with speech delay and mental disability, but without major dysmorphic features and epileptic seizures. Up to 20 cases of the microdeletion 20q13.33 were reported so far [1-4] (Figure 3). Subtelomeric deletions of the long arm of chromosome 20 are rare. Clinical features of individuals with these microdeletions include severe limb malformations, skeletal abnormalities, growth insufficiency, developmental and speech delay, mental insufficiency and seizures. There does not appear to be a clinically recognisable constellation of dysmorphic features among individuals with subtelomeric 20q microdeletions [5]. In our patient developmental and transient growth delays were observed. 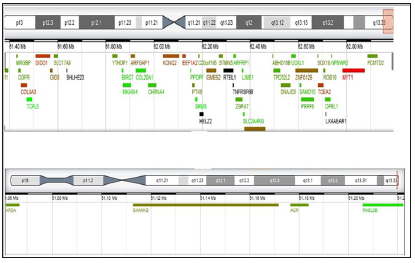 However, severe limb malformations were not present. Several studies report seizures or epilepsy in the individuals with microdeletion 20q especially deletion KCNQ2 and CHRNA4 [5,6]. KCNQ2 encodes a subunit of voltage-gate potassium channel and mutations in one allele have been noted in some patients with benign familial neonatal seizures [7,8]. Recently mutations in KCNQ2 were described in patient with unexplained neonatal or infantile epileptic encephalopathy [9]. CHRNA4 encodes the α4 subunit of the neuronal nicotinic acetylcholine receptor. Mutations in this gene leading to a gain of function were found in some patients suffering from AD nocturnal frontal lobe epilepsy, disorder that is characterized by a variety of paroxysmal behaviours that generally arise out of non-REM sleep [10]. CHRNA4 knockout mice show heightened anxiety-like behaviour [11]. No seizures or sleep disturbances were observed in our patient so far. Lack of seizures in our patient suggests deletion of these genes may show incomplete penetrance [5]. However, we cannot exclude the later onset the seizures as our patient is still young.

Thehaploinsufficiency MYT1 - myelin transcription factor that is highly expressed in the developing brain – and OPRL1 (encoding opiate-like G-protein–coupled receptor that is thought to be involved in the regulation of instinctive and emotional behaviours) arementioned to have the possible role in behavioural problems and neuro developmental delay [12]. Behavioural problems associated with the chromosomal aberration [5,13] were noted at the age of three years in our patient, but at the time of first clinical evaluation they were not related to theautistic spectrum disorders (ASD). Whereas deletion 22q13.33 is wellknown as Phelan McDermid syndrome, the duplication the same region has been less frequently observed [14-16] usuallyas a result of unbalanced translocation [17,18]. The duplication detected in our patient encompasses genes SHANK3, ACR, ARSAand RABL2B.

The 22q13duplications have been reported in patients diagnosed with Asperger syndrome, attention deficit-hyperactivity disorder (ADHD) or schizophrenia [16,19,20]. Hyperkinetic neuropsychiatric disorder is caused by heterozygous interstitial duplication in chromosome 22q13 involving the SHANK3 gene [14]. SHANK3 was first identified in rats [15] and then in humans as a gene expressed predominantly in cerebral cortex and cerebellum. Patients with duplication of SHANK3 are essentially nonverbal and showed poor social interactions and repetitive behaviours [21]. As discussed elsewhere [19,22,23], fine tuning of the gene expression of critical genes such as SHANK3 can be crucial for the development of speech and language and/or social communication in humans.

Whereas a child, who inherited the 22q13 deletion, developed an ASD phenotype, her sister who inherited a 22q13 partial trisomy presented with ADHD. Similarly, in a family with a paternal balanced translocation described by [19], the daughter with a 22q13 deletion developed autism, severe language delay, whereas her brother with a 22q13 partial trisomy, albeit the diagnosis of Asperger syndrome, demonstrated precocious language development and fluent speech. The additional copy of 22q/SHANK3 seems to do not cause language disability but can lead to impairment in social communication [19]. However, some authors reported the poor language development in the case of dup 22qter (see Figure 2). Marked irritability and unstable temper present in our patient were also reported previously [16]. SHANK3 gene encodes a protein of the postsynaptic density (PSD) of excitatory synapses, where it may function as a master scaffolding forming large sheets that may represent the platform for the construction of the PSD complex [24]. At the PSD complex, SHANK3 has been shown to bind to neuroligins [25] which, together with the neurexins form a complex at glutamatergic synapses. Presumably the 22q13 duplication causes overexpression SHANK3 resulting in interference with proper synaptic development, such as developmental deficiency.

Okamoto et al. [18] suggested that the 22q13 duplicationis a recognisable clinical entity with hypotonia, developmental delay and growth deficiency. All these symptoms were observed in our patient. Moreover microcephaly, which was also noted in our patient, has also been reported to accompany frequently the duplication 22q13 [15-18]. As the microcephaly was mentioned only in the Beri-Deixheimer ´s (Table 1) report of 20q13.33 microdeletion, we can assume that this abnormality is more common for duplication 22q13.33. Craniofacial abnormalities are less characteristic for 22q13.33 duplication except for prominent forehead, hypertelorismand flat nasal bridge which are frequently reported in this case (Table 2). But we can not confirm the presence of these in our patient. Poor language development and mental insufficiency/developmental delay are reported in both aberrations – 22q13 duplication and 20q13 deletion -so it is difficult to ascribe these abnormalities to the particular aberration.

Table 1: Schedule of the Data Collected. 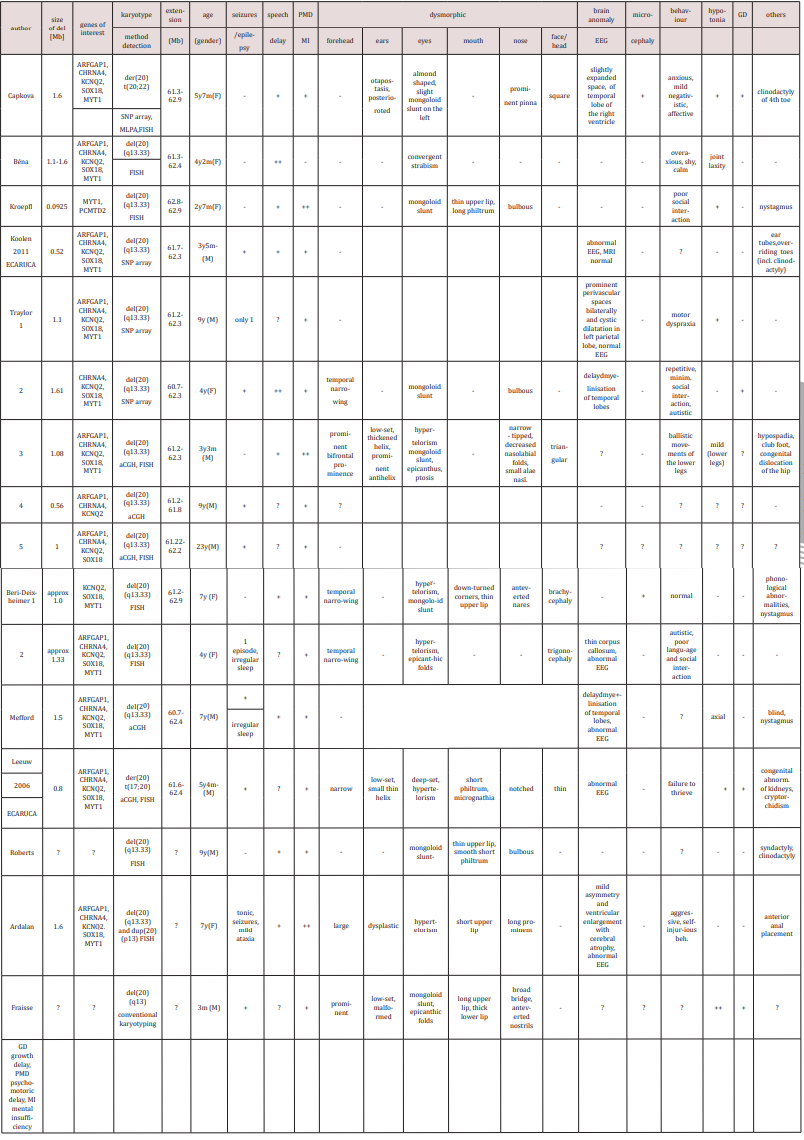 Table 2: Schedule of the Data Collected. 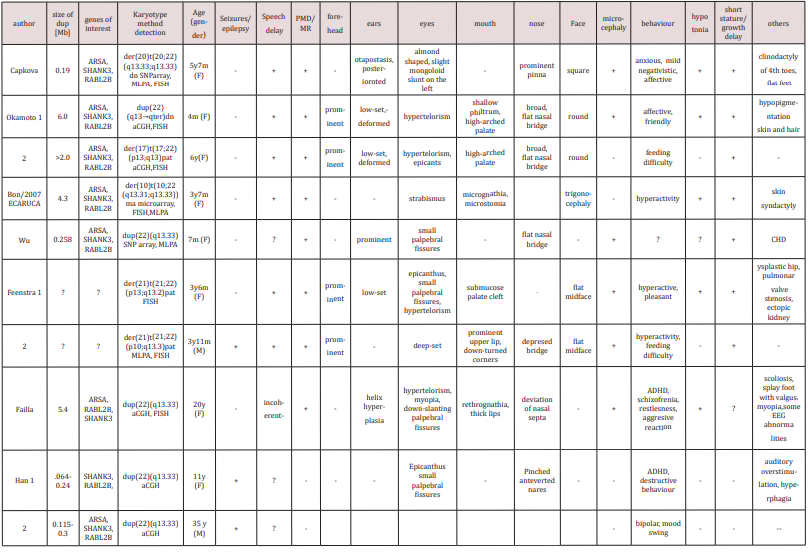 Autistic behaviour was reported in patients with sub telomeric micro deletion 20q13 [5,26,27] Some of the neuro behavioural problems in our patient may result from the 22q13 duplication (moodiness) but she does not suffer fromAsperger syndrome or ADHD. Hyperactivity or ADHD is common in this case [14,16]. Contemporary failure, to thrive, has been described in 20q13 subtelomeric deletions (Table 1). The extension of the subtelomeric deletion 20q13 in all reviewed reports is rather similar, butwe concluded that except for the presence of seizures andmild brain anomalies is impossible to distinguish any subtypes.