A 24-years-old male with massive diquat ingestion complicated by the development of gastrointestinal ulcer perforation, intestinal hyperpiesia, liver failure, renal failure is described. The patient ultimately dead from serious complications. The rare and special gastrointestinal lesions after acute diquat poisoning is worth for us to explore.

Diquat (1,1’-ethylene-2,2’-bipyridilium) is a non-selective bipyridyl herbicide similar to paraquat [1]. Since the paraquat solution was banned in China since September 7, 2016, the diquat has gradually become a major substitute for the herbicide market [2]. Although there are far less case reports in the literature than paraquat poisoning, it is likely to become an potential threat of pesticide poisoning in the near future. There are different complications between diquat and paraquat. Paraquat mainly cause lung injury, and ultimately died from respiratory failure, however, the manifestation of diquat poisoning is gastrointestinal tract [3]. As with paraquat, most of the fatalities involved ingestion of the concentrated formulation with suicidal intent.

A 24 years old young man without any medical history attempted suicideby ingesting about a bottle of pesticide with “weed killer” label (analytical grade20% diquat 100ml) at approximately 00:20 on October 20th.Five minutes after ingestion, the patient began vomiting with much of green gastric contents. After 2 hours, he was taken to local county hospital, giving lavage gastric, inhibiting gastric acid, protecting liver, andso on. The patient was presented to our hospital to get better treatment at 11:20 on October 20th. On admission, he was conscious and without abdominal pain, vital signs were as follows: pulse rate 104 beats/min regular, blood pressure 126/79mmHg, respiratory rate 25 breaths/min, and arterial oxygen saturation 99% on oxygen concentration 3L/min. Physical examination was otherwise unremarkable. He was given 30g of activated charcoal and montmorillonite, following by vomiting brownish-blackish gastric contents. 500mg methylprednisolone was given every 12 hours. A qualitative urine test (dithionite test) which is normally used for paraquat was negative, analysis of blood sample confirmed that paraquat was not detected. Diuresis was given to maintain urine output at least >100ml/hour. 12 hours after ingestion, the laboratory investigation is shown in Table 1. 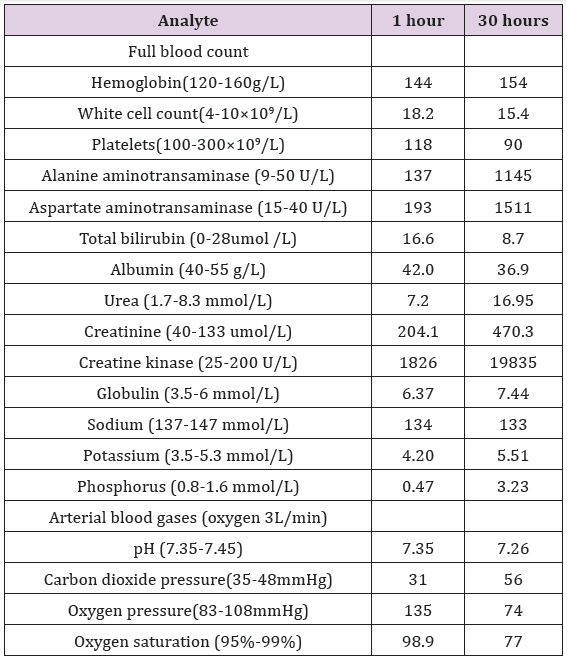 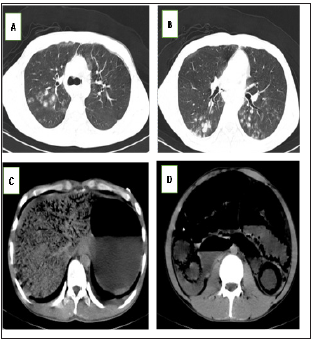 After 2 hours with above therapy, the patients became much more agitated and nonconscious, with nausea, vomiting, shortness of breath. Abdominal muscle tension was too higher than before to touch, with intestinal sound disappeared. 30 hours after ingestion, laboratory investigations are shown in Table 1. His renal and liver function continued to deteriorate, blood gases deteriorated shadowing in both lung fields and renal function. After repeated account with his family members, his parents decided to give up all therapy, including endotracheal intubation and blood purification. At 11:05 on October 21th, the patient’s state continued to deteriorate, vomited a lot of green gastric contents, lost consciousness, blood pressure decreased to 50/23mmHg, and oxygen saturation 87%. Because his patients have given up all therapy, the doctor did not give drugs and mechanical ventilation, the patient dead ultimately at 11:30 on October 21th.

Paraquat and diquat are bipyridyl herbicides, which them are inactivated by adsorption to clay material in the soil [4]. Due to the severely toxicity, the paraquat solution had been prohibited to manufacture and sales in china since July 1,2016. But as agricultural country, many factories use diquat instead of paraquat to production. Unlike paraquat, diquat is not selectively concentrated in the lung and is not known to directly cause pulmonary fibrosis [5].

With an oral LD50 of 231mg/kg in rats [6], diquat is a potent redox cycler and is converted to a free radical which in reaction with molecular oxygen, generates superoxide anions and subsequently other redox products.These products can induce lipid peroxidation in cell membranes, and cause cell death. Another contributing factor of toxicity is the depletion of nicotinamide adenine dinucleotide phosphate with bound hydrogen ion (NADPH) [1,6].

A large number of paraquat poisonings have been reported, while the number of reported diquat poisonings is comparatively small. In mild and moderate to severe poisoning, the clinic manifestation of diquat is essentially the similar to paraquat, difference in pulmonary fibrosis and refractory hypoxemia of paraquat poisoning. However, the clinical manifestation of this patient is relatively rare, for fulminant poisoning, massive intestinal fluid loss, hypovolemic shock, gastrointestinal ulcers, especially perforation causing from intestinal high pressure in diquat poisoning. As the patient, few hours after ingestion, he began to appear apparent abdominal distension, vomiting, symptoms of ileus, CT scan-abdomen shown multiple organs pneumatosis. Previous reports, abdominal imaging diquat-induced almost be reported due to serious illness. In our report, the accumulation of multiple organs in the abdominal cavity was caused by gastrointestinal mucosal injury, which leads to the entry of gas into the organs through the portal vein system. This may be different from paraquat poisoning. There is not show severe chemical injury in the lung of this patient, however, the above gastrointestinal change caused by the strong corrosion effect of diquat is one of the leading causes of death. So far, there is no specific antidote to the treatment of diquat poisoning, mostly treatment principle is more reference to paraquat poisoning, with preventing absorption and enhanced elimination.

Gastric lavage, the use of activated charcoal and mannitol have been advocated as an early treatment to reduce absorption. Because of massive intestinal fluid loss, lots of liquid should be inputted to maintain enough blood vessel capacity and renal perfusion, particularly when treatment is delayed [1,7]. Due to toxin-induced gastrointestinal mucosal erosion, intestinal obstruction usually happens, so patient once feel abdominal distention, gastrointestinal decompression would better be given early. For our patient, because of ingesting larger doses of diquat, and its corrosive action to mucosa, gastrointestinal decompression failed, ultimately, the patient died of hypovolemic shock due to massive gastrointestinal fluid loss. As with paraquat, hemoperfusion should be given as soon as possible, although the effect is not definite so far. Hemodialysis was found to be ineffective in removing diquat from the circulation [8]. When occurring renal failure, continuous renal replacement therapy may be effective to help toxins excreted and maintain the electrolyte balance.

As with paraquat poisoning, mortality of diquat-induced is quietly high, depending on ingesting dose, admission time, properly treatment. We look forward to more research on the mechanism and specific treatment of the diquat poisoning. In addition,toxic chemicals strictly control is still essential laws and regulations. Psychiatric prevention for most of thepoisonings among highrisk population is no less important than the available medical treatment.