Objective: We thought the stable implant construction may affect outcome for elderly hip fracture so assessed the patients for one year as a consecutive prospective study

Method: We include 83 patientsall above 60 years old patients who came to our center with unstable intertrochanteric fracture in one-year admission.at the end we assess the mortality rate and compared with other study.

Conclusion: Dysphagia was present in all of the patients with bulbar involvement, relating largely with malnutrition. Body Mass Index and Score DEP showed correlation to function rating scale ALSFRS-R. There was correlation between Body Mass Index and the Functional Oral Intake Scale and the cough peak flow.It seems stable implant has a little role in mortality rate,but in one year follow up we had 24% mortality and 50% readmission because comorbidity exacerbated which compare to other studies had no deference(p<0.01)

Overview: Opponents of nonoperative treatment for nonambulatory patients suggest that surgery is more effective for pain relief and does not result in unacceptable increased mortality or complications. Ambulatory capability with nonoperative treatment was usually viewed as poor, however some patients do regain some degree of ambulation ability [1].

Although there is no new evidence, prior projection studies indicate that by 2050, the number of hip fracture incidence could increase to between 4.5 and 6.5 million per year around the world [1,2]. Since 1950s when introducing surgery for treatment of hip fracture the goal of surgery from save limb and set union changes to achieving well functional outcome Keene et al. [3]. Found that higher mortality and morbidity in hip fracture was because of baseline comorbidity in these patients and another study were found mortality is not direct related to surgery [4]. According to AAOS guideline surgery as a first-choice treatment well accepted worldwide and the design of implants for fixation have well improving.Aintramedullary fixed angel devices for treatment of unstable intertrochanteric fracture had better outcomes [5].

After searching data base like Medline there is few study which assesses a relationship between mortality and stable device have been found,conversely, we thought it maybe exist so design this study stablished.We include all unstable extra-capsular acute hip fracture in patients above 60 years old who brought to our hospital for one year and underwent surgery with helical blade short femoral nails.before surgery all patient sent for cardiac test and any other test if he/she suffered before admission,all optimization was done in 3-5 days Reduction was done by traction table closely,and nailing was done per cutaneous by one design.all the surgeries done by one well experienced Orthopeadic surgeon. 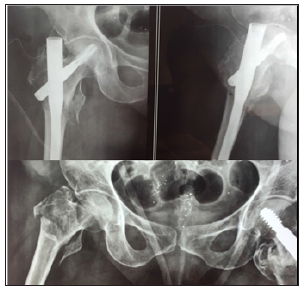 The risk of implant selection which affect in functional outcomes seems logical and have many studies on back,but for mortality maybe represented not that.Overall, mortality seems to be highest in men, nursing home residents, patients older than 90 years, patients treated nonsurgically, patients with significant cognitive impairment or comorbidities, and patients who are unable to ambulate independently [6-8]. Authors of one study noted that patients with intertrochanteric fractures were sicker at baseline, with greater comorbidities, and thus may have higher morbidity and mortality rates.3Overwhelming of rigid construct fixation is according to many studies which have better functional outcome after nailling compare to side plating. patients who underwent intramedullary nail procedures had a shorter length of stay by 1.0 day (P< 0.001), but no other outcome of adverse events, readmission, or operating room time showed any difference between the two groups.5One-year mortality rates have been reported to be as wide ranging as 12% to 37% [9-11].

According to Nationwide Inpatient Sample data from 2005, the in-hospital death rate after hip fracture was 2.8% [4]. However, hip fractures in general substantially increase the risk of death in elderly patients. A meta-analysis of prospective studies found relative hazard rates form mortality during the first 3 months after hip fracture to be a relative risk of 5.75 in women and of 7.95 in men [12]. In a prospective trial in which they compared nailing with plating for stable intertrochanteric hip fractures, the authors found significant loss of function in the first 6 months in the plate group. However, they found no difference in functional scores at 1 year. The mortality rates and complications rates were similar [13-15].

As we got there in no deference in mortality after one year in hip fractures and comorbidity risk factors may have a morestronger than implant for mortality prevention. Last but least, prevention of falling in well developed country seems havea potent evidence for overall diminishing of number of deaths in this population.