Peripheral nerve injury can be surgically treated, but functional recovery is still unsatisfactory. That is why additional methods that can be applied after surgical repair and which modulate nerve regeneration are sought, this regeneration involving both the morphological recovery of the axon and the myelin sheath, but also the functional, physiological recovery of the peripheral nerve. Thus, in recent years, experimental studies have been undertaken in vivo and in vitro, but also in clinical trials involving electric stimulation, low-level laser therapy and pharmacotherapy. But many of these attempts are not yet standardized and well established, although their effect on the anatomicalfunctional recovery of the peripheral nerve is indisputable. In this review we present a brief overview of the main results obtained in these researches in recent years.

Regeneration of the peripheral nerve is a complex process that demands two actions: axonal sprout and demyelization. After the destruction of a portion of the peripheral nerve (by trauma, lesions or tumors), Wallerian degeneration of axon occurs, followed by a retrograde degeneration of the corresponding neurons in the spinal cord. Primary repair involves a surgical act for connection the two remaining nerve ends. Sometimes an autologous nerve graft is needed if the distance between the two nerve ends is too high [1]. The functional recovery after surgery is affected by inflammation, scar tissue formation, or the wrong direction of the axons that begin to regenerate. The axon rate of growth is slow, about 1 mm/day [2]. So, the recovery of nerve function is difficult and many times unsatisfactory. Modern surgical methods of peripheral nerve repair include the use of nanotubes from various synthetic materials [3] and the addition of stem cell to restore the Schwann cell population. These cells secrete neurotrophic and neurotropic factors that stimulate nerve regeneration [4,5]. All of these methods are widely described in the literature. The purpose of this review is to draw attention to some post-surgical methods that have been increasingly used in recent years to stimulate peripheral nerve regeneration and improve the recovery of nerve function after the surgical act has reached its goal. Such methods are electrical stimulation, low level laser therapy and pharmacotherapy. The methods proposed for exogenous modulation on injured peripheral nerve after surgical repair are depicted in Figure 1. 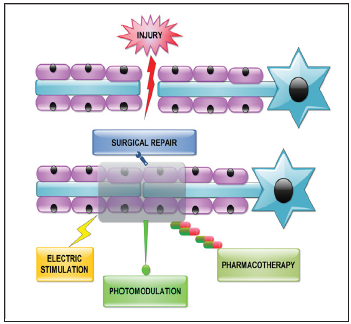 The poor functional recovery of the peripheral nerve after injury and surgical repair makes demands for new strategies to stimulate its regeneration, like the electrical stimulation (ES). It is generally accepted that low frequencies, 20Hz or less, can accelerate the actual recovery rate, findings that were proven in both animal models and in patients [6]. It has been demonstrated that a brief electrical stimulation has a good effect on accelerating axons outgrowth at the injury site [7,8]. Experimentally, in small rodents, a continuous low frequency (20 Hz) electrical stimulation was performed for 2 weeks on the proximal part of an injured nerve by axotomy and it was observed a regeneration of all axons of the femoral motor neurons over a distance of 25mm after 3 weeks [7]. Other studies have shown that an electrical stimulation for only 1 hour induces nerve regeneration on both motor and sensory nerves. ES promotes axonal growth along the lesion site and does not affect the axonal regeneration rate at the distal end of the injured nerve [9].

ES has been shown to be effective in the experimental chronic axotomy (when neurons stay for a long period without contact with the target organ) [10]. Other stimulation patterns have been tried with different durations and frequencies of ES [7-11] but it has been concluded that a procedure of 20 Hz once, for 30 min is enough to induce regeneration after nerve injury [12,13]. The mechanism of action is based on the cAMP-cyclic adenosine monophosphate increase [14-16] that accelerates the upregulation of neurotrophic factors and their receptors in neurons [8,12,17] and Schwann cells [18-20] followed by the upregulation of cytoskeletal proteins, like tubulin and actin, and GAP-43 [9,17,21]. Similar findings were reported in in vitro studies on Schwann cell cultures [22,23], as well as from in vivo research after delayed repair of the nerve [10]. But the neurotrophic factors expression after ES is transient, lasting only few days [8]. The administration of androgens with ES sustains the regeneration mechanisms [12,24]. It has been shown that in patients, after carpal tunel release surgery, a brief 20 Hz ES for 1h hour accelerates axonal growth and the reinnervation of the muscle after nerve damage [25]. Similar results were obtained for digital nerve transection [26].

The use of the low-level laser (LLL) for the treatment of peripheral nerve damage in experimental models has been shown to be effective in several recent studies. In an in vivo rat model with sciatic nerve crushing, it was found that laser phototherapy had an immediate protective effect in this incomplete peripheral nerve injury [27]. LLL treatment maintained a long-term functional activity, decreased scar tissue formation at the lesion site, decreased degeneration of the corresponding neurons in the spinal cord and significantly improved the axonal growth and myelination [28-31]. In an in vitro model, LLL therapy (with a 780nm laser) was applied 1h after cells seeding. The parameters used to apply the laser were generally the following: wavelength, 632.8-980 nm, power, 10-190mW, total energy, 0.15-90 J, pulse or continuous wave in single or multiple points of application [32-36]. A model of a total, complete transection and anastomosis of the rat sciatic nerve, the 780nm laser irradiation in different points (peripheral nerve and corresponding spinal cord), 15min/day, 21 days, resulted in a significant increase in the total number of axons, especially the large size ones, and in a better regeneration [37] compared to control animals. Similar results were obtained on the rat median nerve with end-to-side anastomosis [38].

In a model of rat segmental peripheral nerve loss with neurotube reconstrution, utilization of a LLL (780nm) treatment (15min/ day, 14 days) of nerve and spinal cord resulted in an acceleration of the axonal growth and regeneration [39]. In in vitro cell culture models, LLL accelerates cell migration, nerve cell growth, and fiber sprouting. One of these models used embryonic rat brain cells grown in micro carriers and embedded in neurogel [40]. In a pilot clinical trial in patients with a long-term incomplete peripheral nerve injury, LLL (780nm) could progressively improve nerve function with a significant functional recovery [40,41]. Andreo et al. showed in 2017 that there are around 80 papers that document the acceleration of functional recovery due to the application of LLL therapy after peripheral nerve injury, as well as the modification of the morphological aspect of the nerve or the modulation of the expression of inflammatory cytokines and growth factors [32]. Most of these studies have used a laser power of up to 50mW and a total energy of up to 15 J administered in multiple points. LLL in both the red and infrared spectra applied on injured peripheral nerve accelerated the functional recovery process.

Analyzing the morphological aspects of the nerve is important to see the results of LLL application [42]. These aspects refer to number and density of nerve fibers, mean diameter of axons with and without myelin sheath, thickness of the myelin sheath, area and perimeter of axons and fibers [43]. Another feature to be analysed is the cytokines and growth factors expression present to the injury site. The aim of LLL treatment is to diminish the pro-inflammatory cytokines presence and to enhance the growth factors expression, demonstrated in several studies [44-47]. However, it is necessary to standardize the LLL therapy protocol to improve the regeneration of the peripheral nerve following a lesion.

At present there is no pharmacological treatment available for repairing the injured peripheral nerve. But there are experimental studies that show that small molecules, such as peptides, growth factors or even hormones, have a positive effect on axonal regeneration and growth [48]. Growth factors like nerve growth factor (NGF) [49-51], brain-derived neurotrophic factor (BDNF) and ciliary neurotrophic factor (CNTF) [52-55], locally and systemically administered have contribute to axonal outgrowth, remyelination and functional recovery of injured peripheral nerve. Insulin growth factor-1(IGF-1), fibroblast growth factor (FGF) and glial-derived neurotrophic factor (GDNF), topically applied, have been shown to have an axonal regenerative effect and a better functional recovery result [56-59]. Neuregulin-1 (NRG1), which has a key role in axonal myelination, could be a good candidate for promoting remyelination after peripheral nerve trauma [60]. But the clinical management of growth factors still poses problems in terms of dosage/concentration and timing during treatment, their possible interaction with other growth factors, the side effects that may occur and even the method of administration. If all of these aspects are not well established, the effect may be the opposite [61,62].

Another pharmacological method would be that of exogenous modulation of the expression of some endogenous growth factors. Another approach would be to find a method for growth factors controlled release or for the transplantation of specialized cells to produce them. Two pharmacological agents, N-acetylcysteine (NAC) and acetyl-L-carnitine (ALCAR), experimentally shown to have a neuroprotective role and have been determined to be clinically safe [63-66]. Hormones are also studied as intervention factors in the pharmacological treatment of peripheral nerve damage. They could be neuroactive steroids, progesterone or allopreganolone, which interact with myelin proteins and influence the Schwann cells differentiation. Growth hormone and thyroid hormone have a beneficial effect on axonal myelination in experimental models [67,68]. Neurotransmitters like γ-aminobutiric acid (GABA), acetylcholine (Ach), adenosine triphosphate (ATP), with effect on neuronal-glial interaction are potentially candidates for studies on peripheral nerve repair [69,70]. Recently, plant extracts such as curcumin have been shown to have a beneficial effect on regeneration of injured peripheral nerve, on an animal model, reducing apoptosis, promoting myelination, regeneration and functional recovery of it.

After a surgical intervention to repair the nerve and a possible application of stem cells to the lesion site to induce Schwann cell regeneration and the activation of neurotrophic factors, there is a need for various exogenous interventions to improve both nerve regeneration and functional recovery that is still unsatisfactory in today’s conditions. Recent data provided by biomedical literature show that acute and short ES application after primary surgery has good clinical applicability and induces axonal regeneration, increasing the possibility of functional recovery in various types of peripheral nerve injury. LLL therapy has demonstrated that it is a viable phototherapeutic way to improve recovery of peripheral nerve after injury. It has been shown to have positive effects on nerve regeneration using either infrared or red light. There is a need to standardize LLL parameters for a therapeutical protocol for peripheral nerve regeneration after injury.

Pharmacotherapy is also a beneficial intervention, but again, there is no standardization in this area, and the application of some bioproducts, small molecules, growth factors, hormones and others must be done with great care, not just the quantity but the dynamics of administration having a crucial importance. Otherwise, not only will not achieve the desired effect, but it can even get the opposite. Peripheral nerve repair is a multiple-approach process, combining surgical techniques with the other methods, some of them shown above. In the future, mathematical modeling and in silico models could be useful in understanding the cellular and molecular processes which occur in this pathology to adopt a better repair strategy.