The paper presents a phytopathogenic fungus Mycosarcoma maydis, which causes big losses in maize crops. Additionally, this maize smut exerts an impact on human health. It may be a cause of respiratory tract diseases (e.g. allergy, asthma) and other health problems called basidiomycoses. Its positive influence on humans is related to the content of bioactive compounds and minerals as well as its unusual flavour This species may also be used for preparation of cholera vaccine and for elucidation of the cause of many human diseases.

Mycosarcoma maydis Bref. (=Ustilago maydis (DC.) Corda) belongs to the group of microscopic phytopathogenic fungi and is a cause of maize crop losses. Its hosts are Zea mays L. and Zeamexicana (Schrad.) Kuntze. The fungus infects all parts of plants (usually the lower parts of internodes on stems, leaves, and inflorescences) and forms hypertrophied sori (galls, tumors) filled with ustilospores (teliospores, chlamydospores) [1-4]. The species is dimorphic and its life cycle consists of two stages: non-pathogenic (yeast stage) and pathogenic [1,2,5]. After meiosis, the diploid ustilospores grow and form a haploid promycelium, which produces haploid sporidia (basidiospores). They cannot infect plants but form a dikaryotic mycelium after fusion of two genetically compatible sporidia. Binucleate hyphae are biotrophic and need host plants, especially young meristematic tissue, for further development. The infection is always local, and hyphae penetrate plants intra- and intercellularly. The dikaryotic phase is the longest in the life cycle of smut fungi and results in fusion of nuclei and production of ustilospores [1,2,5,6].

Impact of m. Maydis on Humans

Phytopathogenic fungi are usually not harmful to people, although there are some exceptions, e.g. Clavicepspurpurea (Fr.) Tul. infecting inter alia cereals. Several other species (e.g. Ustilagotritici (Pers.) Rostr, Uromyces sp.) may contribute to the development or intensity of asthma and allergies. Ustilago esculenta Henn. has been noted as a cause of hypersensitivity pneumonitis [7-9]. Generally, there are insufficient data on the harmful effect of M. maydis on human health (Table 1). The oldest information dates back to the early 20th century. At that time, there were reports of dermatomycoses, acropathy, and brain lesions, i.e. leptomeningitis and ependymitis [10,11]. Diseases caused by smut fungi were referred to as "ustialginomycosis" [12]. Currently, the broader term "basidiomycosis" is used for diseases caused by basidiomycetes, which include smut fungi [13].

Recently published cases of human M. maydis infection were diagnosed in immunocompromised patients, who are at risk of fungal infection [14-16]. Most of the data originate from the USA, but there are also reports of cases of the disease in Asia and Europe (Table 1). Mycotoxicoses diagnosed in Croatian children during World War II developed after consumption of maize flour contaminated with M. maydis spores. Very severe symptoms were observed, i.e. acropathy, hand and sole pruritus, oedema, erythema, and skin desquamation. No similar phenomena have been reported since that time [17]. The flour may have been additionally contaminated with other fungal mycotoxins, as M. maydis spores are commonly consumed in Mexico and do not cause disease symptoms. In turn, as reported by Abbas et al. corn smut galls are very often infected by mycotoxigenic fungi (Aspergillus spp., Fusarium spp.) and contaminated with mycotoxins [18].

Table 1: Examples of the M. maydis impact on human health. 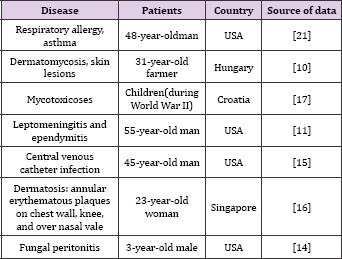 M. maydis spores are present in large amounts in the air during the fall. These spores can cause immediate skin sensitivity in patients with bronchial asthma and late phase skin sensitivity in patients with rhinitis [19-21]. A positive side of M. maydis is its nutritional value. The fungus is sometimes called "huitlacoche", "maizteca mushroom", "Mexican truffle", 'Azteca Caviar" due to its unique, unusual flavour. Young smut galls are edible and treated as delicacy in Latin American countries and Turkey [5,22]. Moreover, given its high content of bioactive compounds, the species exhibits health-enhancing properties [22,23]. It contains large amounts of protein (12% dry base) and low-fat content (up to 6.5 % dry base); hence, it can be used in vegetarian and low-calorie diets [23]. The species has a beneficial effect on the digestive system due to the high level of cellulose (11% dry base). It exhibits anticarcinogenic and antioxidant activity due to the content of te-glucans and phenolic compounds, and the level of ergosterol with anti-inflammatory properties and a cardiovascular protector effect is comparable to that in Ganoderma lucidum (Curtis) P. Karst Commercialized in China as a dietary supplement.

Additionally, it contains large amounts of important minerals: magnesium, phosphorus, calcium, and sodium [23]. The number of bioactive compounds in M. maydis depends on the variety of maize and the time of harvesting galls; it changes (decreases) during thermal processing [22]. In Mexico, M. maydis represents a group of medicinal mushrooms and is used for treating numerous illnesses. Guzman reports 9 different types of health problems that can be treated with this species. Additionally, ustilospores mixed with oil are used as medicament to soften and soothe baby's skin after irritation [24]. Particularly noteworthy are the efforts focused on the application of M. maydis for production of a cholera vaccine. M. maydis is one of the few species with a completely identified genome. It has been genetically engineered with the CBT gene (subunit of the cholera toxin) and used for production and delivery of safe oral vaccines [25]. This species is also widely used as a model organism for investigation of interactions between a pathogen and its host in plant pathology sciences and can also be helpful in elucidation of many human diseases. As shown by Munsterkotter and Steinberg, M. maydis and humans share 777 proteins. 42 proteins of M. maydis are related to serious human diseases including cancer (8 proteins), cardiovascular disorders (7 proteins), and defects in metabolism (11proteins) [26].