Background: Although total knee arthroplasty (TKA) reliably reduces pain and improves knee function, several months are needed for the damaged quadriceps muscles to recover to preoperative strength. Patients with weak muscle strength often use a walking aid to prevent from falling after TKA. The aim of this study is to investigate the biomechanical effect of contralateral cane use on the knee and trunk movement in patients after TKA.

Methods: Twenty people with knee osteoarthritis scheduled to undergo unilateral TKA were enrolled in the study. The movements of knee joint and trunk were measured using three-dimensional motion analysis during walking. The kinematic and kinetic variables were statistically compared between aided walking and unaided walking using two-tailed paired t-tests.

Conclusion: The use of a cane during walking decreases GRF by 5.6% and knee adduction moment by 15.8%. Also, the amount of coronal displacement of the trunk decreased with the use of a cane. Using a cane for walking during the initial rehabilitation period after TKA decrease the load on the knee joint, stabilize the movement of the trunk, and may useful for preventing patients from falls.

Knee osteoarthritis (OA) is one of the leading causes of disability among elderly people over 65 years old. The incidence of knee OA increases with age and is characterized by joint instability, muscle weakness, joint deformity, pain and stiffness [1-3]. Total knee arthroplasty (TKA) is a common surgery for the management of severe pain in knee OA. TKA is a surgical intervention that eliminates pain and knee deformity and improves patient quality of life. Furthermore, TKA not only reduces pain in knee OA patients, but improves gait performance and balance function [4,5]. Elderly patients who have undergone TKA have been found to have some increased risk of falls. Older adults who undergo joint replacement surgery may have reduced proprioception, as well as a short-term increase in pain and reduction in muscle strength following surgery [6-8]. These deficits as well as the hospital admission itself may affect older adults who have less physical reserve and ability to compensate for these deficits than younger adults. Previous studies conducted with TKA patients have presented postoperative fall rate starting from 22% up to 40% [9-12].

According to the literature the intrinsic risk factors responsible for 39%-53% to falls in the elderly people are history of falls [12-14], advanced age [15,16], gender [15,16], muscle weakness [17], reduced physical activity [17], mobility disorders and abnormal gait [18], and fear of falling [12,13,19]. Although TKA reliably reduces pain and improves knee function, several months are needed for the damaged quadriceps muscles to recover to preoperative strength. Quadriceps muscle weakness is most pronounced during the first month after surgery, and patients with weak muscle strength often use a walking aid to prevent from falling [20]. Previous biomechanical studies have found that patients frequently exhibit changes in gait biomechanics after TKA [21-25]. Patients after TKA exhibited a quadriceps avoidance gait pattern as the quadriceps muscles contribute less to the knee extension moment. A previous biomechanical study has revealed that, although there was a significant decrease in the contribution of the quadriceps muscles to the vertical acceleration and forward deceleration of the center of mass during walking, the patients with TKA compensated for this deficiency by leaning their trunks forward [21].

Furthermore the control of trunk movement was found to be critical to maintain balance and prevent falls [22-25]. The trunk constitutes two-thirds of the body weight; even slightly uncoordinated movement of the trunk may increase the risk of balance loss and falls after TKA. Until now, few studies have been performed on the variation of knee and trunk movement in TKA patients using a three-dimensional gait analysis system. The aim of this study is to investigate the biomechanical effect of cane use on the knee and trunk movement in patients after TKA. Our hypothesis was that using a cane in the early postoperative period following TKA affects the knee and trunk biomechanics in the way of decreasing knee joint load and increasing trunk balance during walking.

Twenty female patients with knee osteoarthritis (OA) (mean (SD) age, 72.9 (5.2) years; height, 1.51 (0.059) m: mass, 57.6 (8.68kg) scheduled to undergo unilateral TKA were enrolled in the study. Patients who underwent hip joint arthroplasty or high tibial osteotomy, were diagnosed as rheumatoid arthritis, or could not walk without an assistive device, were excluded. The surgery was performed by a single surgeon using a standard medial trivector approach. A posterior stabilized type implant (Triathlon, Stryker, and Kalamazoo, MI) was used in all cases. All study protocols were approved by the Institutional Review Board of our institution, and informed consent was obtained from each patient prior to initiation of the study.

The measurements of patients were performed using eight optoelectronic cameras (Pro-reflex, Qualities) and four force plates (AM6110, Bertec) at synchronized frequencies of 120 Hz. Threedimensional motion analysis was carried out using twenty-seven reflective markers placed on each segment of the lower extremities, pelvis, and trunk [26] The details of marker placement are showed in (Figure 1). Measurements were performed at three weeks after surgery, and the length of a cane was fit to each patient by one physiotherapist. Patients were instructed to walk with and without a cane at a comfortable self-selected speed. After a few practice trials, eight trials were recorded for each task, and successful trials with a clear hit on the force plate were selected for analysis. The analysis area was defined as from heel-touch to toe-off of each leg. Visual 3D software (C-Motion, Inc.) was used to calculate knee and trunk joint kinematics and kinetics in sagittal and frontal planes. All kinetic data were normalized to body mass. The variables, including peak ground reaction force (GRF), peak knee flexion angle, peak knee moments (flexion, extension, and adduction), peak trunk angle relative to the pelvis (flexion, extension, the operated side, and the non-operated side), and the amount of coronal displacement of the trunk were statistically compared between aided walking and unaided walking.

Statistical differences in gait parameters (ground reaction force, average velocity of the center of pelvis, knee flexion angle, knee flexion, extension, and adduction moments, trunk flexion and extension angle, trunk angle to the operated side and to the non-operated side, and the amount of coronal displacement of the thorax) between aided walking and unaided walking were evaluated by two-tailed paired t-tests. Statistical analyses were performed using PASW software version 17.0 (SPSS Inc., Chicago, IL). The level of significance was set at P = 0.05.

Table 1: Mean (SD) values of the kinetics and kinematics of the knee joint and trunk. 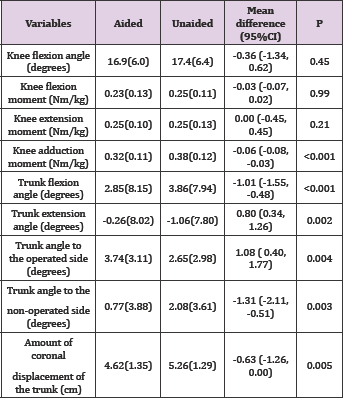 This is the first study that evaluated the biomechanical alteration in knee and trunk movement between aided walking and unaided waking after TKA. Using a cane during walking at the early postoperative period after TKA alters the kinematics and kinetics of knee joint and trunk. The use of a cane during walking decreases GRF by 5.6% and knee adduction moment by 15.8%. Our result is similar to previous studies that evaluated the effect of a cane in people with knee OA, which showed that the use of a cane decreased knee load by 10 % when using a cane in the contra lateral hand [27] Past reports documented that the strength of quadriceps and hamstring muscles declines to 50% of the preoperative level in the first four weeks after surgery [20]. Using a cane during the initial rehabilitation period may decrease the load on the operated knee and may be useful to avoid excess stress on the surgically invaded muscles. In regard with knee adduction moment, the use of a cane after TKA decreases knee adduction moment by 15.8%, which is in agreement with past gait studies following TKA which reported a peak knee adduction moment of between 2.5 and 3.0% (BW x Ht) [28-31].

Until now, few studies have been performed on the variation of trunk movement in knee OA patients pre- or post-TKA using a three-dimensional gait analysis system. The current study found that trunk tends to extend and tilt to the operated side relative to the pelvis with the use of a cane. Additionally, the amount of coronal displacement was decreased with the use of a cane, suggesting that thorax movement may be stabilized during walking. Our results are supported by the previous literature examining the alternation of trunk movement in patients with TKA, documenting that the maximal trunk speed to the non-arthroplasty side and the maximal trunk displacement to the arthroplasty side were both reduced in a medio-lateral direction after TKA [24]. As OA patients show weak muscle strength on the arthroplasty side, the reduction of trunk movement to the arthroplasty side with a cane has a beneficial effect on maintaining body balance and reducing falls. In regards with the sagittal plane of trunk movement, a previous biomechanical study has revealed that patients with TKA compensated for the deficiency of quadriceps muscles by leaning their trunks forward [21].

Another previous study has found the strong correlation between patients with kyphosis and falls after TKA [34]. It has been proposed that the trunk flexion has a biomechanical significance in that it may lead to falls [35], the use of a cane in the early period following TKA may be beneficial to prevent falls as it extend the trunk during walking. Our study has several limitations that need to be considered. Firstly, the study lacks a long-term follow-up. Functional recovery of the lower extremities and trunk movement after TKA is a long-term process, affected by many factors. Secondly, patients with unilateral knee OA may have some degenerative changes and slight pain at other joints of the lower extremities, and these may be factors limiting our results. Thirdly the small sample size could also affect the results.

Using a cane for walking during the early postoperative period following TKA alters the kinematics and kinetics of the knee and trunk, may decrease the load on knee joint, and stabilize the movement of trunk.

The authors thank to Mr. Tomonori Muto, Ms. Hiroko Arai, and Ms. Hiroko Tanikawa for their assistance to take care of the patients.