Egypt has the highest prevalence of HCV worldwide. It is estimated to be 7.3% which is considered more than double the global prevalence that is estimated to be 3% according to the World Health Organization (WHO). The main genotype in Egypt is genotype 4 [1]. For many years ago, HCV treatment remained a challenge, where the available regimens were the moderately potent but poorly tolerated combination of pegylated interferon (PegIFN) and ribavirin for 24 or 48 weeks [2]. Using this combination, HCV genotype 4 patients had intermediate SVR rates (50-60%) [3]. Since 2011, multiple new drugs acting on specific enzymatic sites throughout the HCV life cycle were developed (direct acting antiviral drugs DAAs). DAAs are more potent than the INF/RBV with bettersafety profile. DAAs are now widely available worldwide [4].

Many interferon-free regimens for treatment of HCV genotype 4 infections are available [5]. One of those regimens includes the use of NS5B polymerase inhibitor Sofosbuvir along with the NS5A inhibitor Ledipasvir. Sofosbuvir and ledipasvir are available in a two-drug fixed-dose combination containing 400 mg of sofosbuvir and 90 mg of ledipasvir in a single tablet. This combination is taken as one tablet orally once daily with or without food [6]. Many clinical trials were done on the combination of sofosbuvir and ledipasvir in HCV genotype 4 patients such as the Synergy trial. SVR12 rates in those studies ranged from 91% to 100% depending on fibrosis stages and previous treatment experience [6]. However, the relatively high price of the brand drug remained a challenge as many Egyptian HCV patients had financial difficulty in obtaining the drug. This drew our attention to study the safety and efficacy of a generic product of Sofosbuvir/Ledipasvir as this may represent a clue for mass treatment of Egyptian patients. The aim of this study was to assess the safety and efficacy of the generic products of sofosbuvir/Ledipasvir in treating HCV genotype 4 Egyptian patients.

All patients received Sofosbuvir 400mg/Ledipasvir 90mg (Mpviropack plus) without Ribavirin for 12 weeks according to EASL guidelines [2]. The end point was a sustained virological response at 12 (SVR12) weeks post treatment. During the period of HCV treatment, concurrent treatments given for comorbid conditions that might affect the efficacy or may increase the toxicity of this regimen were revised and whenever possible were stopped or switched to alternative ones with less interaction potentials.

While on treatment, patients were followed up every 4 weeks and for 12 weeks post treatment (to test for SVR12). During treatment period, any adverse event were documented and managed accordingly. Patients were asked specifically about the commonly reported effects reported with the brand drug as headache, nausea, insomnia, fatigue, rash, dyspnea, etc.

Quantitative HCV-PCR was measured using the COBAS Ampliprep/COBAS TaqMan (CAP/CTM) assay with a lower limit of detection of 15 IU prior to treatment, and 12 weeks after treatment. Virologic response was considered when HCV RNA was less than the lower limit of detection at week 12 post treatment (SVR12). Treatment failure was defined as confirmed HCV RNA above LLOQ 12 weeks post treatment. Treatment discontinuation due to adverse events was considered treatment failure.

This study included an easy to treat 326 Egyptian patients with HCV Genotype 4 infection. Most of patients were males (61.96%), mean age was 46.84 years, all were non-cirrhotics by laboratory and ultrasonographic evidence as well as a Fib-4 index<3.25. All of them were treatment naive, 42 (12.88%) patients had history of controlled diabetes mellitus. Mean albumin level was 3.95 while mean platelet count was 189,650 (Table 1). All patients in the current study received the fixed dose combination sofosbuvir/ ledipasvir without ribavirin for 12 weeks (Table 2).

Table 1: Demographic and Clinical Characteristics of the Studied Population. (Sofosbuvir/Ledipasvir for 12 weeks, n = 326). 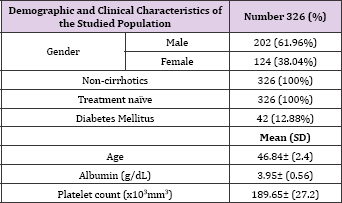 Elimination of HCV in Egypt was a target since long time, however, the absence of effective and safe antiviral treatment remained a challenges towards achieving this target. Recently, introduction of the new oral directly acting antiviral drugs (DAAS) in the national treatment program in Egypt carried a hope towards achieving the goal of HCV elimination, However, still the price of the brand products represent a challenging difficulty as Egypt is a country with low gross national income per capita. Although, the development of generic products of the DAAS carried a solution for this obstacle, yet, data available on the safety and efficacy of these generic products were very limited compared to the brand ones. In this study, drugs used were very effective with SVR12 rate 98.77%. These results were superior to the only two published studies done on HCV genotype 4 patients where in the Synergy trial, 21 patients were included with SVR12 rate 95% [9] while in other study that included 22 naive patients showed an SVR12 rate of 96% [10] . In the same study, the fixed dose combination of sofosbuvir/ledipasvir was assessed in treating 22 experienced patients showing SVR12 rate of 91%. However, the exclusion of treatment experienced patients in our study makes it inappropriate comparison [10]. The side effects of the generic drugs used, was nearly the same known for the brand ones.

HCV elimination in Egypt is a nation-wide target with an expected positively rewarding impact on both the public health as well as reduction on the economic burden. An available generic product having almost the same efficacy and safety of the brand ones but with a much lower cost, will allow the mass treatment of chronic HCV Egyptian patients. This makes the dream of HCV elimination in Egypt an achievable goal.