In this study, two polymethoxylflavones (PMFs), including nobiletin and tangeretin, and one flavonoid, hesperetin with one methoxyl group, were investigated to inhibit lipid accumulation using 3T3-L1 adipocytes. The reducing lipid droplets of the three compounds at 50 μM followed the order nobiletin=tangeretin>hesperetin; the inhibition of triglyceride levels was in the order nobiletin> tangeretin> hesperetin, indicating the numbers of methoxyl groups on the benzene ring play an important role in reducing lipid accumulation. These results imply polymethoxylflavones with high degree of methoxylation are easily permeable to cell membranes and demonstrate more regulating adipogenesis. The findings of this study are useful for designing new antiadipogenic agent and is therefore a potentially lipid lowering compounds based on chemical structure.

In 2016, more than 1.9 billion adults and 18 years and older were overweight, and over 340 million children and adolescents age 5-19 were overweight or obese [1]. Obesity is defined as abnormal or excess fat accumulation that may be closely associated with various human diseases, such as hypertension cardiovascular disease, type 2 diabetes mellitus, and certain cancers [2]. Adipocytes are the cells that primary compose adipose tissue. Thus, obesity results from the factor which adipocytes accumulates a large amount of fat and became enlarged [3]. Obesity and overweightness are the results of both hypertrophy, an increase in adipocyte size, and hyperplasia, an increase in adipocyte number [4]. Up to now there is growing body of evidence that a combination of behavioral, dietary and therapeutic approaches is required for effective prevention and treatment of obesity [4]. Polyphenolic compounds shown biological activities have been widely studied. Polymethoxylated flavones (PMFs), having four or more methoxyl groups among flavonoids with a carbonyl group at the C4 position, have been of particular interest to their broad spectrum of biological activities, including antiallergic, anti-inflammatory and antioxidant activities [5]. Many studies have focused on two of the most abundant PMFs in citrus peels, particularly on nobiletin and tangeretin. For example, in mature 3T3-L1 adipocytes, nobiletin induced apoptosis; tangeretin suppressed triglyceride accumulation [6]. In addition, nobiletin exerts antiadipogenic effects through modulation of the PPAR and AMPK signaling pathway [7]. PMFs are more lipophic due to the hydrophobic character of methoxyl groups as compared to polyhydroxylated flavonoids [8]. Hesperetin is a flavonoid with trihydroxyflavone and an additional methoxyl substituent at the 4'-position. Many studies have revealed that PMFs are significantly more permeable to cell membranes than polyhydroxylated flavonoids; consequently, enhance their biological activities such as antiadipogenic activity. However, not much is known about the comparison between PMFs and polyhydroxylated flavonoid in antiadipogenic effect. The aim of this study was to compare the antiadipogenic effect of nobiletin and tangeretin, belonging PMFs, and hesperetin, a polyhydroxylated flavonoid with a methoxyl group, in 3T3-L1 cells.

Hesperetin was purchased from Sigma Chemical Co. (St. Louis, MO, USA). Tangeretin and nobiletin were obtained from Tokyo Chemical Industry (Toshima, Kita-ku, Tokyo, Japan). The chemical structures of the three compounds are shown in Figure 1, [9,10] all chemicals were of analytical reagent grade.

3T3-L1 preadipocytes (BCRC 60159) were purchased from Bioresources Collection and Research Center (Shin-Chu, Taiwan). Adipocytic differentiation was performed as described by the method of Hsu and Yen [3]. The tetrazolium dye colorimetric test (MTT test) was conducted to measure the cell viability [11].

To monitor the lipid accumulation, Oil Red O Staining (OROSM) was conducted. 3T3-L1 cells were harvested 8 days after the initiation of differentiation. Experimental conditions were the same as those previously described [7]. All data are the average of triplicate analyses. In addition, intracellular triglyceride levels were also determined. The triglyceride levels were measured using a Triglyceride Colorimetric Assay Kit, (Cayman Chemical, Ann Arbor, MI, USA).

To understand peroxisome proliferator-activated receptor y (PPARγ) expression of 3T3-L1 cells, Western blot analysis was conducted. In brief, on day 8, 3T3-L1 adipocytes were incubated with hesperetin, tangeretin and nobiletin for 24 h at 370C in a humidified 5 % CO2 incubator. Primary antibodies against PPARγ and β-actin were applied at 4L movernight and then with secondary antibodies for 1 h. The protein was detected using the WesternBright ECL kit (Advansta Inc., Menlo Park, CA, USA). The expression levels of PPARγ and β-actin proteins were determined by densitometry and analyzed [11]. 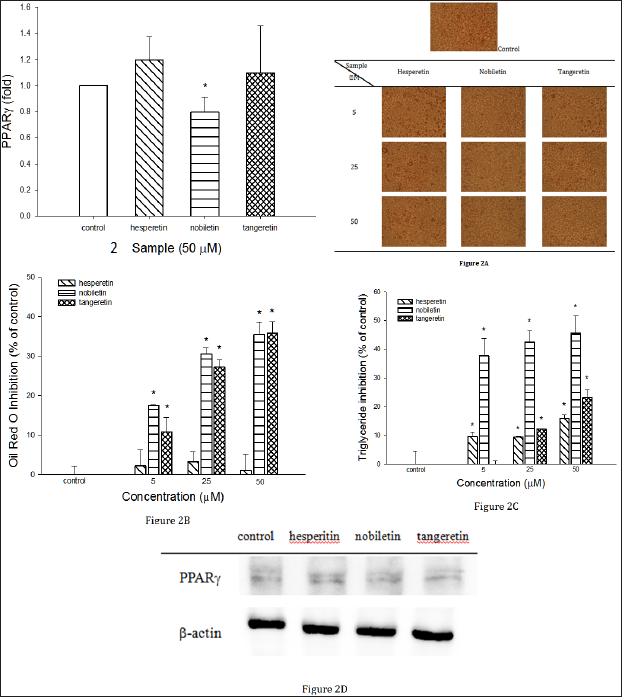 There was no significant difference in the cellular PPAR y expression between the control and the treatment with hesperetin and tangeretin. PPARγ is an inducer of adipogenesis, which it can promote the transdifferentiation of cultured myoblasts to adipocytes, in particular, when coexpressed with C/EBP a [13,14].In addition, PPAR y plays an important role in the early stage of adipocyte differentiation, since it is a transcriptional factor for numerous genes [3]. Our current data shows nobiletin acted as a repressor of the expression of PPAR γ .

With respect to bioavailability of metabolisms of nobiletin, the methyl groups of the B-ring of nobiletin, particularly 4'-methyl group, are easily removed by methyltransferase enzyme [11,15]. Subsequently, the free hydroxyl groups can be conjugated by conjugation enzymes, and thereby resulting in increasing hydrophilicity and easily absorbed [8,11]. Consequently, demethylation of nobiletin facilitates its bioavailability, causing to increasing biological activity such as regulatory action toward adipocytes [11]. The biological activity of phenolic compounds is well associated with their structure [16]. The antimicrobial activity of PMFs are directed to their chemical structure, depending on the number and positions of hydroxyl groups and methoxyl groups, particularly, the presence of a lipophilic group at position 6 or 8 markedly improves biological activity [5].

In conclusion, the current data indicates PMFs such as nobiletin and tangeretin reduced lipid accumulation in vitro, and the regulatory activity against adipogenesis and the mode of action depended on the chemical structure. Consequently, multiple methoxyl groups of PMFs were suggested to the main role in regulating adipogenesis.