Background: The purpose of this research was to assess the association among self-rated oral health, general health, and quality of life (QOL) in Korean older adults.

As the rapid aging of the population involves an increase in the prevalence of oral disease, researchers have become increasingly interested in the oral health of older people and its association of quality of life. Previous research demonstrated that substantial proportion of older adults and elderly population experience problem in chewing, pain, difficulties in eating, and difficulties in social relationship associated with conditions of oral disorders [1-3]. Dry mouth and the diminished number of teeth result in impaired food and beverage intake, which further undermine a person's quality of life [4-6]. Oral health is also has been proved so with many diseases such as diabetes, cardiovascular disease [7]. It has been stated that self-rated oral health status is the critical element toward a better quality of life [8].

A total of 3,840 households were surveyed, selected from 192 survey location. The overall participation rate was 82.8%. All participants provided written informed consent for both the participation in the survey and use of the data for research purposes. Participants completed a health interview, health behavior survey, nutritional survey, and medical examination. A health interview includes a database of demographic characteristics (age, income, education, occupation, marital status, current smoking). This study analyzed 1,866 subjects aged 60 years or older who participated in KNHANES V-1 (January-December, 2010). Information regarding gender, age, marital status, education, smoking status was obtained from health behavior survey. Education was classified as less than elementary school, middle school, high school, and over college or University graduate. Occupation was divided into the current working and no current working. Marital status was classified by the presence/ absence of a spouse. Current Smoking was categorized as yes or no.

The self-rated oral health was measured with the question "how do you think your oral health state is, considering your teeth and gums?" with a choice of five answers (very good, good, fair, poor, and very poor). Cronbach alpha for question was 0.65, 0.66, 0.65, 0.67, 0.69, and 0.64, respectively. Self-rated general health was measured with a question that "In general, would you rate your health?" and using single-item global ratings measured on 5-point Likert scales: 'poor,' 'fair,' 'good,' 'very good' and 'excellent.' The higher the scores indicate the more negative rated health.

The Korean version of the European quality of life questionnaire (EQ-5D) was used to evaluate the quality of life. The EQ-5D records the level of the self-reported problem according to five domains: mobility, self-care, usual daily activities, pain/discomfort, and anxiety/depression. Each domain is assessed based on a single question with three response level (no problem/ some problem/ extreme problems), and participants selected the statement that best described them. For logistic regression, "no problem" was considered as "no problem" with code "0" and "some problem," "extreme problems" were considered as "problem" with code "1."

Data were analyzed by IBM SPSS/PC statistical program (version 23.0 for Windows; IBM SPSS, USA). Dichotomous variables are presented as percentage variables and analyzed with Chi-square test, and continuous variables are presented as a mean and standard deviation and were analyzed by independent t-test. Multivariate logistic regression analyses were conducted to analyze the association of the self-rated oral health with selfrated general health. After controlling for multivariate (age, gender, income, education, household income, smoking), the multivariate model gets odds ratios and 95% C.I (Confidence Intervals) for all factors. P- Value<.05 was considered statistically significant for all statistical analyses. 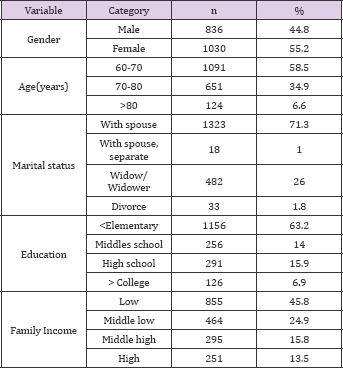 Participant's oral health status was shown in Table 2. More female than male had caries in permanent teeth (90.2% vs. 86.2%) (F=7.01, p<.01) but there was no gender differences in a toothache within a year and the jaw pain. More female than male reported chewing difficulties (42.2% vs. 37.9%) (F=3.44, p<.05) but there were no gender differences in a problem in speaking Tables 2,3 shows the association between self-rated oral health and demographic characteristics. 45% of individuals rated their oral health as very good/good/ fair and only 55% as poor to a very significantly higher proportion of participants were classified poor pool. The average scores of self-rated oral health were 3.51, and a (45.92%) and very poor (9.06%). 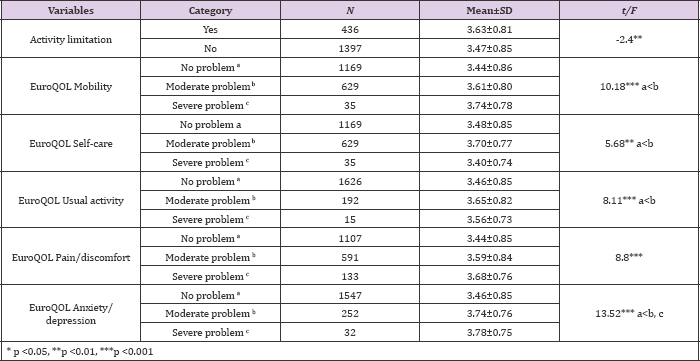 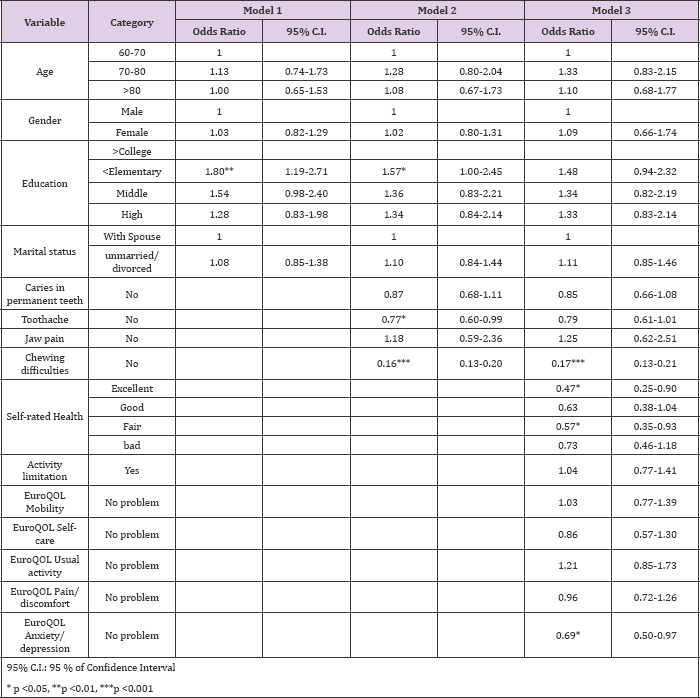 It is interesting that chewing problems was a substantial factor associated with poor self-rated oral health compared with other oral problems [14]. Reported one of the leading complaints of elders was not chewing well and masticatory function, which is an essential factor affecting the independently living older population, in particular. Also, the decline in chewing ability is related to functional frailty, lower QOL, and ADL [10,15]. There also was a contrast in the social inequalities profile of this impact in the sample under analysis. Previous research reported that subjects in lower education had higher oral health impact scores. In this study, elders of greater social inequalities in income and education distribution had negative self-rated oral health scores, which is consistent with previous research [12,16, 17]. This study reported that mobility limitation is associated with self-rated oral health.

This result was consistent with [18] longitudinal study (2001) which showed that problems with mobility were associated with few teeth and chewing difficulties. This may indicate that a reverse causality can also be possible that is frailty can lead to poor oral function. Further, analysis of our data indicated that poorer perceived general health and poorer psychological well-being has lower self-rated oral health score. A better self-rated general health, mobility limitation and depression were associated with a better self-rated oral health. This findings indicated that a higher level of general health contribute to keep better oral hygiene and increase chance for socialization which may reduce anxiety and depression. As reported by [19], preventing mobility barriers may contribute to better general health, which has significant public health implication.

With an aging population there is a greater need for oral and dental care to maximizing successful aging. Based on the results of our study, general health is not only important as an independent effect on self-rated oral health, but it may operate synergistically with a higher level of mobility and anxiety/ depression as well. Therefore a comprehensive assessment of the oral health of the elders requires not only their oral status but also measure of functional capability as well as psychological condition.