Blood samples were collected from 135 patients with RSAs and 97 fertile women, from which genomic DNA was extracted, and PCR and Real-time-PCR were performed to identify the miR-196a2T>C and miR-499A>G genotypes. RSA patients exhibited higher frequency of miR- 196a2CC and miR-499AA+GG genotypes, whereas miR-196a2TT+TC and miR-499AG genotypes have been showed higher frequency in the control group, but the frequency distribution is not significantly different between the comparing groups. Based on our study results, the presence of miR-196a2T>C and miR-499A>G polymorphisms is independent and not related to RSAs. The above results are very important, constituting a data base for doctors and researchers in order to know which miRNAs polymorphisms should be ruled out in the investigation of RSAs. Larger study group should be investigated in order to confirm our preliminary results.

Recurrent spontaneous miscarriage (RSM), defined as the occurrence of three or more consecutive abortions before the 20th week of pregnancy [1-3], is one of the greatest challenges of reproductive medicine due to its vast and sometimes poorly defined etiology. Approximately 1-3% of fertile couples will experience recurrent spontaneous miscarriage [4]. Endocrine dysfunction, chromosomal and anatomical anomalies, maternal infections and immune reactions have all been implicated as etiologic factors [5,6]. However, in about 50% of RSM cases no specific pathology is detected [7-10]. Posttranscriptional target genes regulation is solid associated with microRNAs. In addition important regulatory functions are served by microRNAs such as maintenance of stem cell-ness and modulation of differentiation. MiRNAs are short, single stranded RNA molecules of approximately 19 to 23 nucleotides; they are also noncoding small regulatory RNAs locating into the RNA- induced silencing complex, recognizing the 3-untranslated region (UTR) of target mRNAs, and thereby regulating their expression by translational repression or mRNA degradation [11].

Endometriosis, infertility and preeclampsia may be associated with miRNAs based on recent studies [12, 13]. Recently, different human cardiomyopathies have been associated with differential expression of miRNAs [11]. The single nucleotide polymorphisms (SNPs) of miR-196a2 gene, miR-196a2T>C (rs11614913) and of miR-499 gene, miR-499A>G (rs3746444) have been reported to be a possible genetic risk factor for recurrent spontaneous abortion (RSA) in a Korean population [12,13]. The aim of this study is to investigate the potential association of miR-196a2T>C and miR- 499A>G polymorphisms in patients with recurrent spontaneous abortions (RSAs).

This was a retrospective case study performed in Alexandra Maternity Hospital in Athens, Greece. A total of 232 women were included in the study. The study group comprised of 135 patients with at least two miscarriages of unexplained etiology, before the 20th week of gestation who visited the recurrent miscarriage outpatient clinic of Alexandra Hospital (mean age ± Standard Error of Mean [SEM] 33±0.64 years; BMI±SEM: 24.9±0.88). Women with a history of autoimmune disease, endocrine, chromosomal, infectious or thromboembolic disorders were excluded from the study. The control group consisted of 97 unrelated Caucasian multiparous women with no know past history of pregnancy loss (mean age ± SEM 44±1.64 years; BMI±SEM: 25.4±0.47). The study protocol was approved by the Alexandra Hospital review board. Blood samples were collected by venipuncture in EDTA containing tubes for serum preparation and genomic DNA extraction using a commercially available kit (PureLink® Genomic DNA Mini Kit, Invitrogen™, Life Technologies, USA).

Polymorphisms miR-499A>G Was Detected Using PCR:Blood samples were collected from 135 patients with RSAs and 97 fertile women, from which genomic DNA was extracted. Subsequently, PCR and Real time PCR were performed to identify the miR-196a2T>C and miR-499A>G genotypes, using specific primers and hybridization probes. The results from the two groups were evaluated for possible statistical correlations. The two single nucleotide polymorphisms (SNPs) studied was in complete Hardy- Weinberg equilibrium.

Table 1: Genotype frequencies of miR-196a2T>C and miR-499A>G in RSA patients and control subjects. 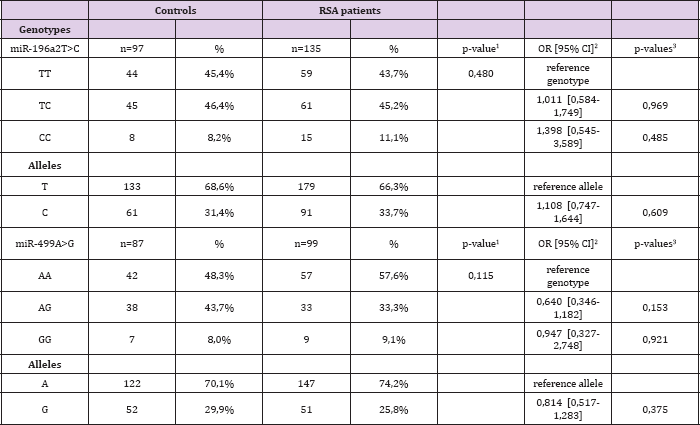 The association of variants of miRNAs with recurrent miscarriages is still not very clear. Implantation leading to a newborn infant is the result of a perfectly orchestrated association between a viable embryo and a receptive endometrial; a variety of key proteins and growth factors are implicated via playing a pivotal role to this process. Micro-RNAs have also been involved in this process. However their specific role in normal embryo formation, endometrial formation for pregnancy, and in early stages of gestation is still unclear [14]. MiR-196a2T>C and miR-499A>G have been associated with a lot of cancer types maybe by affecting RSA through cell proliferation since the aberrant cell cycle regulation is the causing root of cancer [13]. Mature miR-196a-2 represses the expression of transcription factor HOXB8, a home box protein which is involved in implantation and myeloid differentiation.

The pivotal roles of HOX genes in implantation are clear based on various studies. In addition, miR-196a-2 has another important target, annexin A1 (ANXA1), a calcium- and phospholipid-binding protein related to anti-inflammation through inhibiting NF- κB pathway. Increased miR-196a2 levels by the miR-196a2CC genotype could decrease ANXA1 transcripts, leading to excessive inflammation. Abortive process may be caused by dysregulated inflammation [13]. Mature miR-499 preferentially inhibits the transcription of SOX6 mRNA, a transcription repressor of fibroblast growth factor -3 (FGF-3) associated with cell proliferation and cell differentiation of developing fetal tissues [13]. In our study we showed the percentages revealing in a European- Caucasian population opposite to the Korean population as has been shown in recent published studies [12]. Based on our study results, the presence of miR-196a2T>C and miR-499A>G polymorphisms is independent and not related to RSAs. The above results are very important, constituting a data base for doctors and researchers in order to know which miRNAs polymorphisms should be ruled out in the investigation of RSAs.

In conclusion, our findings seem to be controversial. The small number of samples may play its role to this controversial result. A larger study group should be investigated in order to confirm the association between miR-196a2T>C and miR-499A>G polymorphisms and RSAs.

The authors are grateful to all who provided assistance during the preparation of this manuscript.