Increased microbial resistance to currently available drugs is a major cause of morbidity and mortality throughout the world.Thus, novel antimicrobial drugs are needed. The use of heterocyclic agents is an attractive alternative. Compared to conventional antimicrobials, they are low-molecular-weight compounds that are nonvolatile and chemically stable and do not easily permeate the skin. Pyrazoles, also called as azoles, are five-membered ring heterocyclic compounds with two adjacent nitrogen atoms [1].Recently, pyrazole derivatives have been found in nature [1]. For example, β-[1-pyrazolyl] alanine was isolated from watermelon seeds (Citurllus lanatus). The most common use for pyrazoles is to treat inflammation and inflammation-associated disorders such as arthritis [2]. Pyrazole derivatives are the subject of many studies due to their potential antimicrobial [3], Antiviral [4],Antitumor [5,6], Antihistaminic [7], Antidepressant [8], Insecticidal and fungicidal properties [9]. Pyrazole derivatives function as 5-a-reductase inhibitors [10]. In addition to having antiproliferative [11], Antiparasitic [12] and herbicidal properties [13]. Several pyrazoles have also been reported to have anti-inflammatory [14] and antiprotozoal effects [15,16].

Which render them valuable as medicinal and plant-protecting agents? Furthermore, the current literature indicates that 1; 2-pyrazole derivatives possess various biological activities [17]. Recently, acyclonucleosides, which are heterocyclic compounds bound to an acyclic sugar moiety, have gained worldwide attention because of their high potential as chemotherapeutics [18,19]. Substituted pyrazole and its analogs have been used as precursors for the synthesis of various biologically active molecules. Recently,improvements in microwave chemistry have dramatically reduced reaction times, which have been demonstrated in several fields of organic chemistry [20]. Additionally, microwave-assisted organic synthesis has shown significant improvement in the generation of combinatorial small molecule libraries [21].

Details of compound synthesis and characterization are presented elsewhere. Pyrazoloxazine derivatives 1, 3, 4, 5, 6, 8, 9, 10, 13, 21, 24, 25, 2Y, Ox2, Ox1, oxime and oxazine were chosen for the evaluation of antimicrobial activity against the obtained microbial strains.

The microorganisms were previously isolated and identified in patients from the Blood Bank, Albaha from different hospitals and health centers in Albaha County. Infected patient urine samples, throat swabs, vaginal swabs, wound swabs, sputum, and breath samples were cultivated in Mueller Hinton agar (for bacteria) and Sadourad dextrose medium (for fungi). These pathogens were identified after purification using Vitek2 (Biomerieux 3584, USA). Purified organisms were grown on slants in the appropriate media and stored at 40C until further use.

The Gram positive (S. aureus 119, S. faecalis, S. agalactiae, S. enteritidis, and S. epidermidis) and Gram negative bacteria (K. pneumonia, P. aeruginosa, P. mirabilis, A. baumannii, and E. aerogenes 157) were pre-cultured overnight in nutrient broth in a rotary shaker at 37°C and then centrifuged at 10,000 rpm for 5 min. The pellet was resuspended in double distilled water, and the cell density was standardized and used to inoculate Mueller Hinton medium. Petri dishes were inoculated in triplicate, and the average zone of inhibition was calculated. The fungal inocula (A. niger, A. fumigates, P. chrysogenium, T. rubrum and C. albicans 157) were prepared from 5- to 10-day-old cultures grown on potato dextrose agar. Petri dishes were flooded with 8 to 10 mL of distilled water, and the conidia were scraped using a sterile spatula. The spore suspension used for fungal inoculation was harvested.

The antibacterial activities of the pyrazoloxazine derivatives (1, 3, 4, 5, 6, 8, 9, 10, 13, 21, 24, 25, 2Y, Ox2, Ox1, oxime and oxazine) were determined using the agar cup method [22,23]. Nutrient broth was used as a basal medium for testing bacteria. Overnight bacterial cultures were spread evenly over the surface of the solidified Mueller Hinton Petri dishes. The selected bacterial culture and the inoculated plates were percolated to form wells (4 mm), which were created in the solidified agar using a sterile borer. We used 20 mg of each compound per well. Rifampicin was used as the reference (10 μg per disc) and was added in addition to the pyrazole compounds to evaluate the efficiency of the synthesized pyrazoles. The prepared plates were incubated at room temperature (approximately 25C0) for approximately 24-48 hrs. After the incubation period, the plates were collected, and the inhibition zones were recorded in mm. Dimethyl sulfoxide (DMSO) was used as a solvent to prepare the rifampicin stock solution (5 mg in 0.5 mL). Initially, 10 ng of compound per disc was prepared.

The antifungal activities of the pyrazoloxazine derivatives (1, 3, 4, 5, 6, 8, 9, 10, 13, 21, 24, 25, 2Y, Ox2, Ox1, oxime and oxazine) were determined with the disc diffusion method [24,25]. Potato dextrose agar was used as the basal medium for testing fungi. Potato dextrose agar was prepared by dissolving, yeast extract (3 gm), peptone (10 gm), dextrose (20 gm) and agar (15 gm) into 1 liter of distilled water, pH 6.0. The media was poured into Petri dishes and allowed to solidify. The potato dextrose agar plates were inoculated with each fungal culture (10 days old) by point inoculation. The filter paper discs (5 mm diameter) were impregnated with 100 μL of each compound and were placed on the inoculated plates. DMSO Table 1: Zone of inhibition (mm) for different pyrazoloxazine derivatives was used to dissolve the compounds and completely evaporated before the discs were applied. A blank disc impregnated with DMSO was used as a negative control, and Nystatin (10 ng) was used as a positive control. Antifungal activity was determined after 72 hr incubation at 28°C. The diameters of the zones of inhibition were measured in mm.

These compounds are present in nature and are constituents of nucleic acids, amino acids, alkaloids and hormones. Thus, pyrazoles may be misincorporated during synthesis of the aforementioned compounds, leading to an incorrect structure and loss of function. Additionally, pyrazoles can inhibit the enzymes responsible for its synthesis, such as nucleic acid gyrase in bacteria [27]. The maximum and minimum recorded inhibition zones were 40 and 10 mm, respectively, for all tested pyrazoles against the pathogenic bacteria species (Table 1). S. aureus 119 exhibited a 40 mm zone of inhibition after contact with the synthesized pyrazoloxazine derivatives 1, 5, 8, 10, 13 and 24. S. enteritidis and E. coli were completely resistant to all of the synthesized pyrazole derivatives. K. pneumonia and E. aerogens 157 were the least affected bacteria and exhibited zones of inhibition between 10 and 12 mm (Table 1).

Recently [28] Stated that pyrazole compounds exhibit their activity against specific targets (including bacteria), protein targets (including DNA gyrase, fatty acid synthetase, and glutamate racemase) and RNA to cause bacterial cell death, The growth inhibition pattern of different pyrazole compounds tested against P. aeruginosa were approximately equal for compounds 4, 6, 8, 10 and 24 and were the largest zones of inhibition for all of the tested compounds (Table 2). The order of effectiveness of the compounds against P. aeruginosa was (from greatest to least) 5, 6, 8, 10, 24, 9, oxime, oxazine, 1, and 4. However, compounds 3, 4, 25, 2Y, Ox2 and Ox1 had no effect on P. aeruginosa. The order of compound effectiveness against P. mirabilis was (from greatest to least): 4, 24, 1, 6, 8, 6, 13, 12, oxime, 3 and oxazine. P. mirabilis showed complete resistance to all of the other synthesized pyrazole compounds. S. agalactiae was highly resistant to the synthesized pyrazoloxazine derivatives except for three compounds (from greatest to least inhibition): 24, 13, and 21 Compound 25 was the most potent pyrazoloxazine derivative tested against S. epidermidis, which exhibited a 24 mm zone of inhibition. 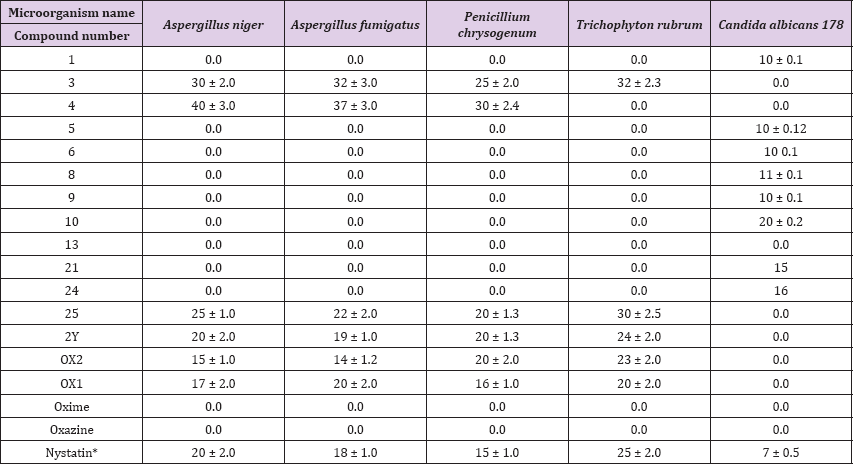 Figure 1: Antimicrobial activity of the pyrazoloxazine derivatives 24 and 25 on Staphylococcus aureus 119. andida albicans 178. 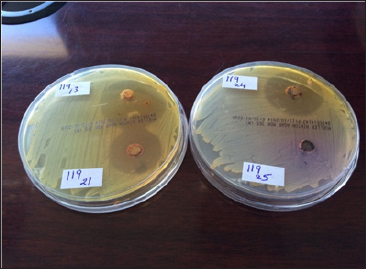 Stated in his study of the enzymatic basis of drug-drug interactions with systemic triazole antifungals that these compounds inhibit the enzyme in sterol biosynthesis that inhibits ergosterol synthesis (the main cytoplasmic cell membrane fungal sterol), leading to fungal death, We are interesting to decipher the mode of action of these active pyrazoloxazine compounds to increase its inhibition efficiency in near future. Where we are doing a lot of work in find out efficient antimicrobial compounds based on different strategy [30,31]. Finally, we could conclude that this study has shown that the newly synthesized pyrazoloxazine derivatives bacterial and fungal species that might be used for infections have a potent inhibition capacity against most examined pathogenic treatments (Table 3). 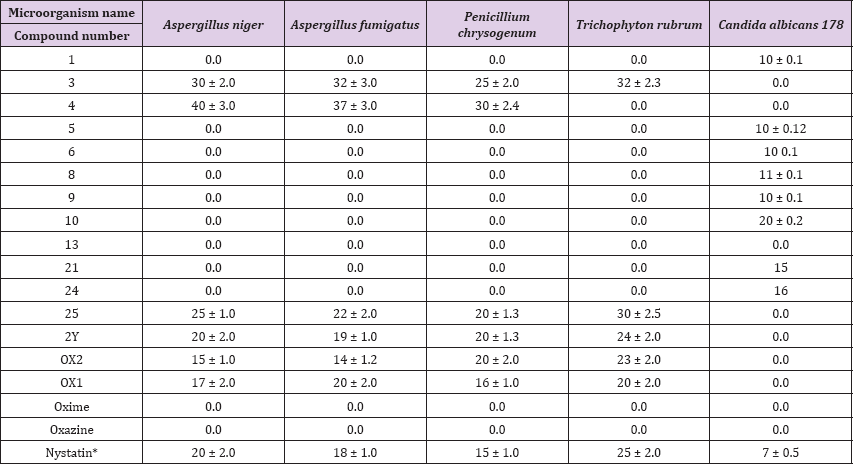 This work was funded by the Deanship of Scientific Research, Albaha University, KSA. The assistance of the Deanship is gratefully acknowledged. Also, appreciation was extended to staff of microbiology in Albaha Blood bank.