The paper discusses the application of constrained Bayesian method (CBM) of testing the directional hypotheses. It is proved that decision rule of CBM restricts the mixed directional false discovery rate (mdFDR) and total Type III error rate as well.

Let's denote: г0 г_, г+ and are the regions of acceptance of the above-stated hypotheses 0 , H_ and H+ , respectively, and let us consider the following losses

Where L1(Hi,Hj) and L2Hi,Hj) are the losses of incorrectly accepted and incorrectly rejected hypotheses. It is clear that the " 0-l" loss function is a private case of the step-wise loss (1). For loss functions (1), one of possible statement of CBM takes the form [3-5]. 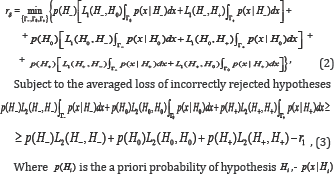 Denotes the marginal density of x given Hi , i.e.

is a priori density with support

is some real number determining the level of the averaged loss of incorrectly rejected hypothesis. 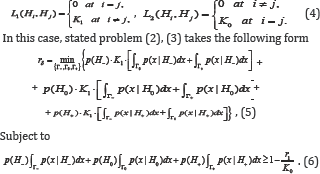 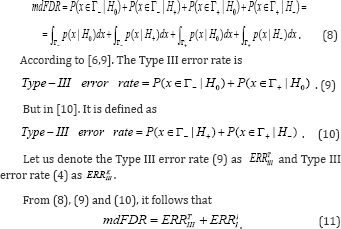 When satisfying the condition

Proof: Because of specificity of decision rules of CBM, alongside of hypotheses acceptance regions, the regions of impossibility of making a decision exist. Therefore, instead of the condition

Where P(tmd| Hi) is the probability of impossibility of making a decision [3,11,12].

Taking into account [12], condition [6] can be rewritten as follows 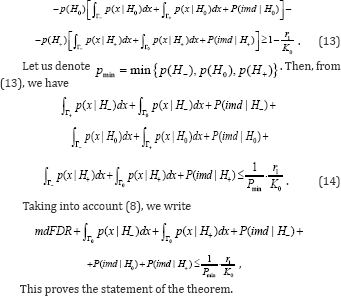