Results: Cell cultures irradiated for 40, 60 and 120 seconds revealed higher proliferation when compared to controls, 24 and 72 hours after irradiation. Statistical significance was reached for the group of 60s at 24h and for groups of 40s and 120s at 72h (p<0.05). Alkaline phosphatase (ALP) levels were also found increased for most of the irradiated cell cultures compared to controls. Statistical significance was reached for the 120s cultures at 24h as well as for the 20s at 72h (p<0.05). Growth factors' levels for irradiated cultures and controls were arbitrary during the experiment.

Conclusion: Within the limitations of this study, Nd:YAG (1064-nm) LLLT with the energy densities applied, increased PDL cells proliferation 24 and 72 hours after irradiation. Further studies need to confirm these results and to reveal any influence on ALP levels and growth factors secretion.

Low Level Laser Therapy (LLLT) has been used for several years, in many clinical applications in Medicine and Dentistry. These low-level doses of radiation enhance healing process and result in pain relief [1,2]. However, the exact biological mechanisms that explain LLLTs effect are still a matter of research. The major absorbing structures for the red visible and near infra-red laser wavelengths used in LLLT are most likely proteins [3]. Several studies have suggested that either elements in the mitochondrial cytochrome system or endogenous porphyrins in the cell are the energy-absorbing chromophores of LLLT Irradiation with red and near infrared light can lead to the activation of mitochondrial respiratory chain components and the initiation of a signaling cascade which promotes cellular proliferation and growth factor's expression. More specifically, laser irradiation results in an increase of calcium release from the mitochondria to the cytoplasm [4]. At low laser doses an increase of [Ca++] in the cytoplasm triggers mitosis and enhances cell proliferation which could explain the bio-stimulatory effect of lasers on cell cultures [5,6]. Those doses can promote cellular proliferation in a wavelength- and dosage- dependent manner.

The relevance of some irradiation parameters still remains an important area for further research [7]. The undifferentiated periodontal ligament cells (PDL) known as pluripotent ligament cells, have the ability to differentiate either to osteoblasts, or cementoblasts, or adipose cells, or fibroblasts [8,9]. Therefore, those cells have a major role in the regeneration of periodontal tissues, lost from periodontal diseases. New cementum, new bone and new periodontal fibers can derive from those cells [10,11]. LLLT is mostly applied with diode lasers (810-980-nm) or neodymium- doped yttrium aluminum garnet (Nd: YAG) lasers (1064-nm) [1]. Few studies, mostly using diodes, have focused on the influence of LLLT on PDL cells proliferation and differentiation, supporting a positive effect [12-15]. Nevertheless, literature data about the possible effect of Nd: YAG laser, are not sufficient. A positive upgrowth stimulation of PDL cells regenerative potential could be very important in both non-surgical and surgical periodontal therapy Growth factors are protein molecules regulating cell proliferation and differentiation, which can lead to increased wound repair in clinical conditions. 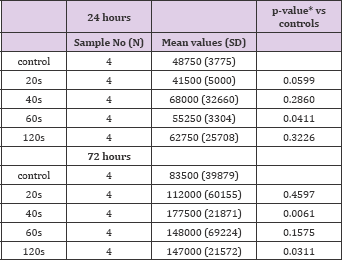 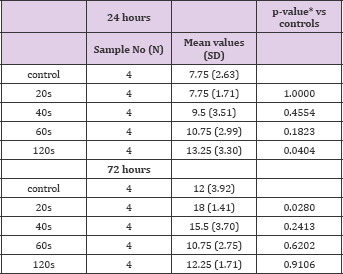 Irradiation underwent using Nd: YAG laser device (1064-nm, DEKA® Smart file) with a fabricated hand piece (manipolo per terapia N40601). The laser beam was directed perpendicularly to the cell level from a distance of 5mm (Figure 1). Cultures were irradiated on day 0, for 20, 40, 60 or 120 seconds. Laser settings were: Power: 0.5W, Energy: 50mJ, Frequency: 10Hz, pulse duration≥700μsec. Energy densities were 2.6, 5.3, 7.9 and 15.8 J/cm2 for 20s, 40s, 60s and 120s respectively. The effect of laser irradiation on these primary cell cultures was evaluated after 24h and 72h. Non irradiated cell cultures were used as controls. The experiment was performed in duplicate.

In order to evaluate cells' proliferation, cell count was performed at the abovementioned time points for both irradiated and control samples. Cell count was performed with the use of inverted optical microscope (Zeis®) after thrypsinisation (0,05% thrypsin/EDTA in PBS for 5 minutes) and hemacytometer assisted cell counting, by an experienced blinded (the examiner was not aware of the treatment or each culture) biologist.

Alkaline phosphatase levels are a reliable marker of assessing the differentiation of those pluripotent cells into premature osteoblastic cells [21]. Alkaline phosphatase activity of irradiated and control PDL cells was detected using colorimetric assays. From every sample, 2ml of supernatant collected and mixed with a buffer of diethylamine (1mmol/l diethylamine, 0.5mmol/l Clorium Magnesium, pH: 9.8, 37oC) and pNPP (10mmol/ml p-nitro-phenylo- phosphoric acid). These mixed collections were incubated at 37oC for 40 minutes. Alkaline phosphatase activity was assessed with the use of a photometer at 405-nm, by estimation of p-nitrophenol absorption, and calculated in units (every unit corresponds in 1μmol/L paranitrophenol enfranchised every minute at 37oC and pH9,8, Calcium kit, Sigma-Aldrich and Procedure No. 0150, Stanbio Laboratory).

To investigate differences in cells number between each test group and controls Students t-test was used. For the comparison of growth factors levels (VEGF, EGF and bFGF) the change from the baseline measurements in each group was used and Students t-test was performed for the comparison between (Figure 1). All tests were two-sided and α=5% level of statistical significance.

Figure 2: Bar chart referring to cells population for the irradiated and control cultures, at the established time points.

Figure 3: Photos taken from optical microscope (magnification x100) showing the control cell culture at the left picture and the 40s group culture at the right picture, 72 hours after laser irradiation.

Figure 4: Bar chart referring to ALP levels (IU/lt) for the irradiated and control cultures at the established time points. 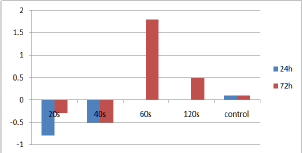 There is enough scientific evidence to support the positive effect of Low level laser irradiation on wound healing [2] and proliferative effect on fibroblasts and osteoblasts [22-25]. Due to the few evidence about LLLT effect on PDL cells, the present study intended to investigate the effect of the 1064-nm wavelength on the proliferation and differentiation of primary human PDL cell cultures. Our results demonstrate a positive on PDL cell proliferation for the groups of 40s, 60s and 120s, 24h after irradiation, while 72h after treatment, all energy densities led to an increased cell population compared to the controls. LLLT with ED of 7.9 J/cm2 led to a statistically significantly higher proliferation 24h after treatment while when ED's of 5.3 and 15.8 J/cm2 were applied, a statistical significance was reached at the 72h evaluation. These results imply that LLLT with the conditions applied were safe in terms of cells viability since no dead cells were observed under the microscope at any irradiated cell culture, nor at the controls. This finding is in contrast to the results of the only other study [14] that used Nd: YAG laser for LLLT on PDL cell cultures. Chen et al. [14] found a 100% cell viability for non-irradiated cells, while a viability of 97.7, 95.4, 89.7 and 85.1% (for 3.125, 6.25, 9.375 and 12.5 J/cm2 respectively) was reported for irradiated cell cultures.

It has to be noticed that the evaluation of cell viability was performed 5 days after laser application. Interestingly, similarly to our microscopic observation on the 3rd day after treatment, Chen et al. [15] did not find signs of dead cells in their cultures. Unfortunately, no data on cell proliferation were reported and the reason of cell death remained unclear. Moreover, our results are in accordance to the findings of Kreisler et al. [13], which used a diode GaAlAs (809-nm) laser to treat PDL cell cultures [13]. The EDs used in this study were: 1.96, 3.92 and 7.84 J/cm2. All energy densities applied contributed to a statistically significant increase of the proliferation rate 24h (p<0,001) and 72h (p<0,05) after irradiation, compared to controls. Furthermore, Soares et al. [26], found that LLLT with a diode laser (660 nm, 30 mW ED: 1.0 J/ cm2) has a significantly higher positive stimulatory effect on the proliferation of PDL cells [26]. The positive influence of LLLT on PDL cells proliferation is also supported by the findings of Choi et al. 2010, who reported a higher rate of proliferation, even though not statistically significant [12]. Finally, Ren et al, in a systematic review including 8 studies, concluded that the diode low-level laser showed positive effects on promoting PDL proliferation and osteogenic differentiation [27].

The present study is the first to our knowledge that investigated the influence of LLLT using a 1064-nm wavelength on ALP activity of human PDL cell cultures. ALP levels were increased at most of the irradiated cell cultures compared to non-irradiated. Irradiation for 20s and 120s led to a statistically significant increase of ALP levels compared to controls, 72h and 24h after irradiation respectively (p<0.05). These findings are in agreement with the other study that reported on the effect of Diode lasers on the ALP activity of PDL cells. In the later investigation, Choi et al. reported that diode GaAlAs (810-nm) laser irradiation on PDL cells had a positive effect on ALP secretion [14]. In this experiment, PDL cells were irradiated with EDs of: 1.97, 3.94 and 5.91 J/cm2. ALP levels for all irradiated cell cultures were significantly higher compared to controls at 24, 48 and 72 hour time points. Data collection about VEGF, EGF and bFGF levels for irradiated cultures and controls were arbitrary during experiment and did not provide any conclusion. Molecular techniques performed, did not reveal any influence of the applied LLLTs on the selected growth factors secretion. One possible explanation for this may be either the small sample number or the specific growth factors selected whose regulation may not be affected by the certain laser settings.

The comparison of the studies focused on this issue reveals the heterogeneity in terms of wavelength, laser settings, optical fiber used, irradiation distance, methodologies etc. Nevertheless, it seems that LLLT does not lead to cell damage and certainly has a positive effect on human PDL cells. In the present study cells' irradiation was performed using a special hand piece, compared to what has been used in other studies. This hand piece provides a wider spot size, than the optical fibers (200-400nm), distributing uniformly the energy the irradiated surface. It would be of great clinical importance if increased differentiation of pluripotent PDL cells may be provoked in a tissue level, when periodontal tissue regeneration is intended. Ozcelik et al. [28] in a clinical study examined the possible additional clinical effect of LLLT on periodontal tissue regeneration with enamel matrix derivatives. Their results showed a significant positive effect on edema and pain reduction but not in other clinical parameters. The present study did not intend to elucidate in detail the effect of LLLT on human PDL cells. The Nd: YAG (1064-nm) is one of the commonly used lasers in Dentistry and Medicine. It is well documented about its safety and efficacy in therapeutically and surgical use. Considering the lack of evidence about Low Level Nd: YAG (1064-nm) Laser Therapy in PDL cells, this study aims to be the trigger for further research in that field.

Within the limitations of this study (small sample size), it may be concluded that LLLT on primary human PDL cell cultures using Nd: YAG (1064-nm) of certain energy densities increase cells proliferation 24 and 72 hours after irradiation. ALP activity may be positively affected at 24 and 72 hours, leading to cell differentiation of the investigated pluripotent mixed cell population. Further studies on higher sample sizes are needed to verify the Low Level Nd: YAG (1064-nm) Laser Therapy influence on PDL cells proliferation and differentiation, and to elucidate each biological pathway.