Following the development of ECMO, new complications related to its use are occurring. Sharing feedback is the key to improve the efficiency of the management of those complications, for the safety of the patient who is frequently dependent on the ECMO therapy. We report the case of a venous cannula thrombosis occurring on a 43-year old patient for which the least malfunction of the ECMO equipment would immediately induce a drop in the SpO2. After a multidisciplinary discussion regarding the precise diagnosis and the therapeutic strategy, the replacement of the femoral vein cannula happened to restore the patient's condition and to enable the subsequent successful weaning from ECMO.

The Extra-Corporeal Membrane Oxygenation (ECMO) is being used more and more frequently as a therapy to overcome a temporary circulatory or respiratory failure. Though very efficient, the technique generates unfortunately some complications, which number increases with its widespread deployment. Some publications [1,2] already relate some of these complications and their treatment. These feedbacks are important to help the medical teams improve the care of patients depending on the ECMO. In the current clinical case, we report a brutal oxygen desideration, attributable to the thrombosis of the femoral vein cannula. We also describe the cannula replacement operating method used, which allowed a restoration of an optimal oxygen saturation and subs0e0q0u0e0n0t0. favorable outcome.

43-year-old patient under noradrenalin was admitted in life-support unit following symptoms of extreme bradycardia associated to 2-minutes low-flow. Initially admitted to the hospital for influenza symptoms with bilateral acute respiratory distress syndrome (ARDS), it appeared rapidly that the patient was indicated for the deployment of an ECMO, which was installed percutaneously between the right femoral vein and jugular vein. At day 12, we observed of a degradation of the respiratory, hemodynamic and renal functions. An increase in the deltaP and the formation of a blood clot indicated a thrombosis of the membrane. The ECMO circuit was completely replaced with a new oxygenation membrane, without changing the cannulas. The patient desaturated very fast during the circuit clamping. Despite the new circuit and oxygenator, a severe refractory hypoxemia persisted conducting to the realization of a thoracic-abdominal-pelvic CT scan (Figure 1), which revealed the presence of a thrombus at the tip of the femoral vein cannula (Figure 2).

Notwithstanding the fact that the pump had a satisfying flow, and given the refractory hypoxemia, a concerted medical and surgical decision was taken to replace the cannula even though the patient did not tolerate well to the circuit clamping. To enable a successful replacement of the venous cannula we proceeded as follows after a joint medical and surgical team meeting on the operating strategy:

Figure 2: Thoracic-abdominal-pelvic CT scan with injection, portal-venous phase, a few imaging above the extremity of the femoral vein cannula. 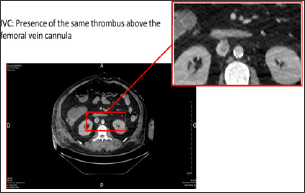 a) Patient in the operating theater, set up with trances ophageal echocardiogram and scopy

d) Clamping the shunt and cutting of the new circuit

e) Clamping the former circuit, introduction of the guide wire through the femoral venous cannula before its complete ablation.

f) Control of the guide wire position into the right atrium using the echocardiogram. Setup of the new femoral vein cannula on the guide wire.

g) In parallel to branching the venous line on the femoral vein cannula, while the former circuit is clamped, the jugular vein cannula is disconnected, purged with water and then reconnected to the new circuit (Figure 3).

After restoration of pump flow, we immediately observed a positive evolution with resaturation of the SpO2 to 100% (SpO2 level had dramatically dropped though briefly during the change of venous cannula thanks to the fast procedure). Thereafter and within the week that followed, we could attempt a progressive weaning from the ECMO, with complete withdrawal.

The formation of a thrombus inside the ECMO circuit is a rare complication, which occurs much less frequently than bleeding complications (bleeding related to cannulation, cerebral or lung hemorrhage) [3]. To date a single case of intra-cardiac thrombus is reported in the literature [4]. The decision to change the venous cannula can be discussed. Actually, the only symptom was the refractory hypoxemia, with an assured and correct blood flow. We could have proposed an in-situ thrombolytic, but it is a riskier procedure. The eventual restoration of the SpO2 confirms that our procedure was a good solution. The well-defined operating strategy was the key to the success of the procedure, because the patient’s SpO2 was dropping very fast once the circuit was clamped, which dictated a fast operatory gesture.