Introduction: Environmental factors affect on foodstuff quality. Because pigs and humans eat same foodstuffs (cereals, potatoes and dairy products) we could expect that time-related changes in them could show simultaneous health changes in both of them. In this study are assayed female (F) and male (M) mortality changes in coronary heart disease (CHD) and their associations with pig autopsy parameters. Data are presented from period 1951-2000, but statistically analyzed from period 1954-86 including autopsy density per 100,000 pigs [A.1/100,000], autopsy percents of microangiopathy [MAP.a-%] and cardiovascular diagnoses total [CVD.tot.a-%], visually myocardial degeneration [MyCD.a-%], hepatosis diaetetica [HeD.a-%] and skeletal muscle degeneration [SMuD.a-%].

Discussion: Similar variation in F.CHD and cardiac mortality of pig is suggestive on common, obviously dietary factors. In this article is discussed on exogenous grain fat peroxides, which are known in the etiology of livestock diseases, their associations with climatic factors, farming procedures and food processing. These changes have been counteracted by changes in feed supplementation, fertilization, agricultural procedures and grain farming shift southwestwards. F.CHD and Pig MAP decline below their 1957 levels until 1972, before respective male CHD decline, can be explained by lesser tobacco consumption.

Conclusions: Pig cardiac mortality associated significantly with female CHD, less significantly with male CHD. These associations seem possible to be explained by variation inside the foodstuffs and different smoking habits. Food peroxides are discussed. Different opinions and the great database of veterinary surgeons suggest on co-working by veterinary and medical universities.

In epidemiological studies foodstuff composition tables can be misleading [1]. Pigs eat the same food as humans (cereals, potatoes and milk products) and are free from the diversity in socio-economic status, tobacco and alcohol consumption. Their life span is ca six months. That's why it was supposed that their health changes could nearly immediately indicate changes in the basic foodstuffs and the role of dietary factors in the human health.In this study are benefited pig cardiac mortality data and assessed it with female and male CHD. Additionally to the general etiological factors are introduced exogenous peroxides [2].

According to Grant (1961) [3] MAP (dietetic microangiopathy in pigs, Mulberry heart disease).Means "... vascular lesions in thecapillaries and small muscular vessels of the myocardium (cardiac MAP) and sometimes in other tissues (extracardiac MAP). MAP may follow an episodic pattern; if a pig survives an episode the lesions recognized as initial-phase MAP can then give a way to changes aiming at restoration of vascular structure, restitutionphase MAP." Initial-phase MAP can include "vascular engorgement, haemorrhage, (and secondary) degeneration of myocardial fibers, sometimes exudative inflammatory reaction" and restitution-phase MAP can be associated with myocardial scarring. In histological examination is seen partial or total occlusion of capillaries and arterioles caused by PAS-positive material inside capillaries and subendothelially to arterioles and capillaries, too. It can be associated with hemolysis and thrombopenia, so resembling human "Thrombotic thrombocytopenic purpura" [3]. The affected pigs were in good nutritional state, weighting 20 to 35 kg [3]. In autopsy are seen typically vivid wine-red mottling, transudations and signs of acute circulatory failure [3].

Thafvelin [2] and Grant [3] could produce MAP with experimental diet containing peroxides and could relieve it with selenium (Se) and vitamin E [3], but believed that MAP does not belong to typical antioxidant deficiency syndrome family [3]. The role of magnesium in MAP has been supported by observations: Mg supplementation has relieved dramatically MAP pigs resistant to Se-vit-E treatments [4] and MAP pigs have had elevated Ca/Mg ratio in cardiac and hepatic tissues [5]. Role of Mg in human diseases is supported by the Mg reference values of plasma: for humans (0.710.94 mmol/L) [6] and for pigs (0.97-1.45 mmol) [7]. Mg has been associated with platelet dependent thrombosis, too [8].

Hepatosis diaetetica (HeD), Myocardial and Skeletal muscle degeneration (MyCD and SMuD, respectively) are known to be associated with excess of (rancid) polyunsaturated fats (PUFA), deficiency of selenium (Se) and vitamin E [9]. HeD has been labeled as "toxic liver dystrophy", which resembles yellow atrophy of men [10] . Old textbooks wrote that human CHD mortality is not always associated with coronary occlusion, includes infarcts of different ages and seem to be associated with changes in coagulation. When additionally pig cardiac diseases are associated with peroxides [11] and Mg [12], pig and human cardiac diseases have much in common. The primary aim of this study is to assess the compliance between human and pig cardiac mortality, not to find its complete explanation.

Figure 1: Shows development in female CHD and available data concerning autopsy proportions of pig CVD.tot, MAP and MyCD, as well as autopsy density. The first MAP-diagnoses ("enzootischer Herztod") are from 1954. 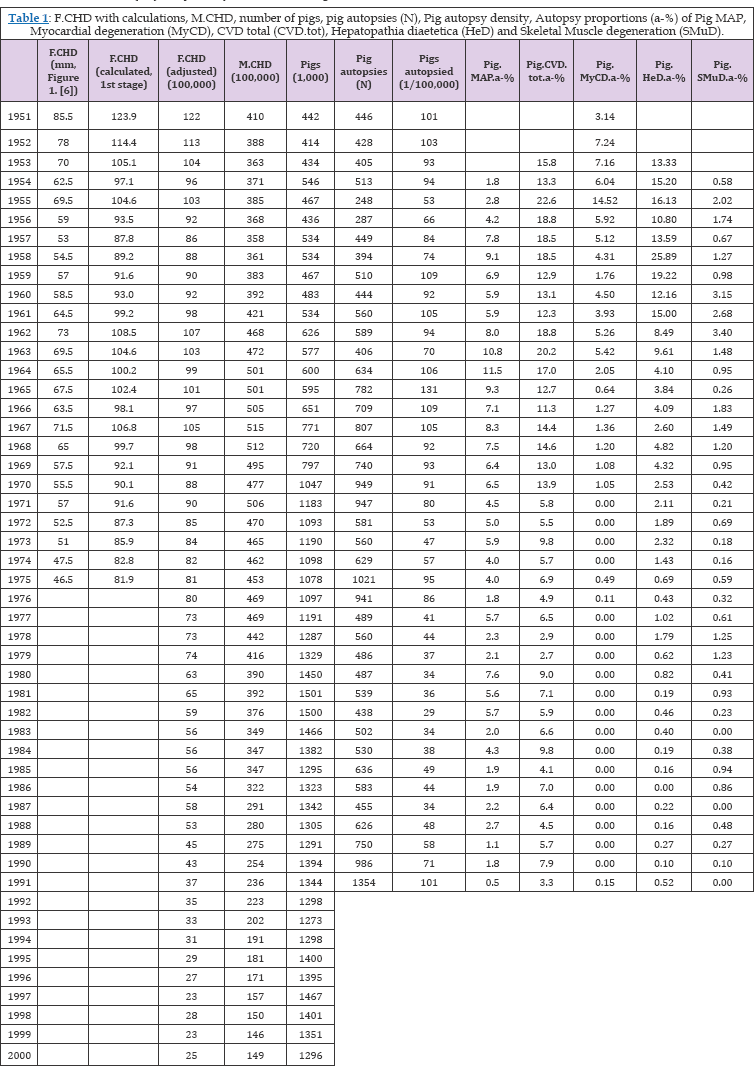 Figure 2: Shows development in female CHD and in autopsy proportions of pig CVD.tot, MAP and MyCD. MAP was increasing until 1964. This figure shows the changes in pig MAP.a-% and its periodical deviation from CVD.tot.a-% 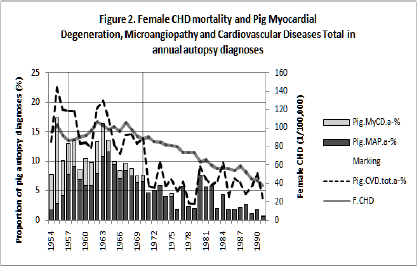 Figure 3: Represents Female CHD and its regression by [MAP.a-%]. They have a top between 1956 and 1972. In 1954-55 differences can be based on changes in differential diagnoses or selection of primary cause of mortality. 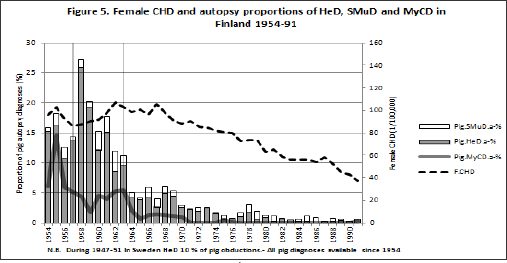 This study shows that F.CHD associates better than M.CHD with cardiac mortality of pigs as expected, because of lower female tobacco consumption (discussed in [12]). The association was best during 1957-76 [Fig. 3]. The proportion of annual autopsies of pig population was small, about 1/1000 (or less, because the number of pigs, life span 6 months, was measured once a year [15,16,17,18]). The variation in autopsy density was high. Anyhow autopsy density associated significantly with pig MAP variation especially in 1957-72 [Fig. 1, Tabl. 2] - during the absolute F.CHD epidemic. Rapid increase in 1957. F.CHD during 1957-62 seems to need additional factors to fertilization or soil data [12,21]. Because of tobacco contamination male population is not discussed more.

Se experiments with pig begun slowly by veterinary surgeons after 1960 and reduced HeD mortality from 10 to 2 % [25]. Selenium and vitamin E containing fodder salt mixture came to agricultural stores (without advertisements) before Oct 1, 1963 [26] . The permission of such a free sale was based on field trials [27] . Single permissions were given for Se supplementations for fodder before 1968 [28]. Resolution of Ministry of Agriculture freed all commercial fodder and fodder salt mixtures from separate permissions and defined the accepted contents of Se for fodder and fodder salt mixtures since Jan 1970 [29].

HeD.a-% was all the period 1953-61 in Finland above 10 % [Table 1.], the mean HeD.a-%, in Sweden in 1947-51) [10], and declined below it steeply since 1963 [Fig.6]. HeD.a-%, which can be seen as a peroxide-antioxidant indicator [2], is here associated with MyCD.a-% [Fig.6] and could have had cumulative effects on slowly growing human atheromas. The obvious changes in food Si content [22] could have been similar by pigs and humans, but Se availability was remarkably lower by humans before the beginning of Se fertilization in the 1980's [12]. In human medicine Se is not included in general cardiac medicines [30]. HeD.a-% is a better measure of mortality, than morbidity.

Quality changes in grain other than associated with mineral element contents

The association of wet autumns with HeD and SMuD was known before 1962 [25]. Fresh grain risk on pig HeD was known before 1953 [10], why it had been advised not to use the grain during a few months after threshing, but this advise was not often possible to follow [25]. In the 1950's a remarkable part of pig foodstuffs was often old human waste food with poor quality.

a) Geography: During the II World War Finland lost 10 % of its cropland, which had to be replaced by clearing land to soils less ideal for agricultural purposes, mainly towards northeast from the line Kokkola - Kotka. During 1959-87 cleared land amounted ca 200,000 ha and its NE/SW ratio was 3:1 [31].

Grain quality determination by microscope (sprouting) did not predict baking quality. Invisible premature germination in cob, mechanical and microbiological changes had been(in 1964) suggested to be more important factor than germinability in (acceptable) baking quality [37]. A new method for grain quality valuation, falling number (amylase activity indicator) came obligatory for all commercial grain since autumn 1966 [39]. Anyhow in 1966 [38]. Germination is associated additionally with activation of several other enzymes, as lipases [40]. Possibly the lipase activity is the cause of "unstable fats", the ability of grain to produce peroxides[2,3]. 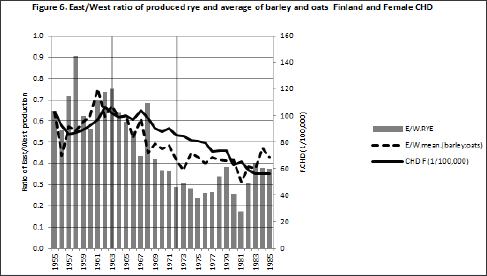 Thafvelin (1960) [2] discovered that heating the grain before grinding/milling could destroy the peroxides of (obviously preterm germinated) grain and protect pigs against liver, muscle and heart damages (HeD, SMuD and MAP) and death. First in 1966 was reported in Finnish journal on a Swedish experiment, which showed that grain rapidly heated to 100-105 0C had higher nutritional value for livestock than slowly heated [40]. Anyhow without data concerning fodder peroxides (same as in general after 1960).

During the 1960’s wet grain problem has been counteracted by increasing number of combine-threshers (selection of better weather became possible) [32,33] and drier capacity and quality and post-harvesting technology in general, especially for avoiding germination in the loads on lorries waiting hours their turn to the drier. High quality driers could save better the fertility, too. Anyhow rancidification can slowly occur after grinding.

Se and vitamin E obviously protect us from the main harms of excessive peroxides, but food chain monitoring from field to mouth may need monitoring. Maybe the role of peroxides is higher in the non-CHD mortality (e.g. muscle and liver diseases) and gastronomy. Possibly gastronomy can have valuable indicators of food health (France!).

Problems with grain quality shifted grain production towards southwest (from the first half of the 1960's) [41]. This was associated with changes in female CHD (Figure 6). (East Finland is the usual name of the part of Finland towards NE from the line Kokkola-Kotka).

b) Other: During 1958-64 in Finland was benefited diluted NH4HSO4 salt mixture ('AIV salt") for conserving silage [42]. This could have been reduced Mg availability, by forming insoluble MgNH4PO3 in the gastro-intestinal tract of cows [43]. As food additive in some cheese breeding was benefited KClO3 to avoid Clostridium contamination from the 1950's until 1972 [43,44]. Haaranen observed increased MAP frequency associated with whey feeding in surroundings of cheese factories, [43], which could be explained by peroxide (KClO3) effect.

Remarkable psycho-social change was the reduction of 300,000 horses during 1950-69 [45,46]. The loss of men's best friends obviously affected more Finnish males than females or pigs and could partially explain lower M.CHD on rural than urban areas before 1969 [13]. Pig MAP ("enzootisher Herztod") , first represented in autopsy analyses since 1954, seemed (indirectly) to have been an increasing, not-well defined disease of "wellbeing” pigs in 1954-57 [43], but had been referred earlier with different labels [43]. Possibly MAP definition was not clear before 1961 [3]. Some of "CVD.tot” diagnoses are represented so unevenly that possibly they were included in group "Others” (or in MAP?). Pericarditis, a symptom of MAP, disappeared totally, myocarditis and endocarditis nearly totally during 1971-79 from autopsy summary analyses. Fig. 2 suggests that they were included in "Others” during that period.

Pig cardiac mortality associated significantly with female CHD, less significantly with male CHD. These associations seem possible to be explained by variation inside the foodstuffs and different smoking habits. Food peroxides are discussed. Different opinions and the great database of veterinary surgeons suggest on coworking by veterinary and medical universities.