Lymphatic Filariasis in a Migrant Patient with HIV Infection

Lymphatic filariasis (LF) is a neglected tropical disease according to the World Health Organization. The disease has different symptoms caused by adult worms that occupy and block the lymphatic vessels. In this document we introduce a case of lymphatic filariasis caused by Wuchereria bancrofti in a nigerian migrant patient affected by HIV infection.

In December 2020, a Nigerian patient (EDO state), went to our Emergency room in Grand Metropolitan Hospital of Reggio Calabria. He was 38 years old, he lived in Italy for 3 years and was looked after by another Infectious Unit because of HIV infection. He was in our emergency room because of asthenia and a pain in his left lower limb. The patient’s vital signs were within normal limits, his blood tests showed: normochromic normocytic anaemia (Hb 7.6 g/dl), white blood cells within limits (WBC 5500mmc), marked eosinophilia, (EO 28,5%, absolute count 1570mmc), thrombocytopenia (PLT 53.000mmc), kidney and liver functions within normal limits. After a consultation with an infectious disease specialist the patient was hospitalized in the Infectious Disease ward. Physical examination of the chest and abdomen was normal, while he presented picture of elephantiasis of the left lower limb. During his hospitalization, with prior consent, the patient received blood transfusions. He underwent chest x-ray and abdomen ultrasound, both normal.

The patient presented with a moderate viro-immunological compensation (he tooked elvitegravir/cobicistat/emtricitabine/ tenofovir disoproxil), with undetectable HIV-RNA levels and CD4 640mmc. Serology for HBV and HCV, lue and leishmania were all negative; quantiferon test negative too. Serology for toxoplasma and CMV showed previous infection. As for the marked eosinophilia, the patient was subjected to urine and stools parasitological examination on three samples with negative output. Considering the laboratory data of marked eosinophilia and the clinical picture of elephantiasis of the left lower limb, we send a blood sample for endoscopy. The endoscopy revealed Wuchereria Bancrofti microfilarial presence which allowed us to diagnose a lymphatic filiarasis case. Considering microbiological data, the hospital pharmacy was required to supply ivermectin and albendazole, however, only a few hours after the microbiological diagnosis, the patient withdraws consent to the treatment and, against the advice of the health professionals, resigns himself.

Lymphatic filariasis (LF) is a neglected tropical disease according to the World Health Organization [1]. It is transmitted through different types of mosquitoes and it was estimated that in 2018, 51 million people would be affected [1]. LF is caused by parasites classified as nematodes and Wuchereria bancrofti is responsible for the 90% of the cases of filariasis. 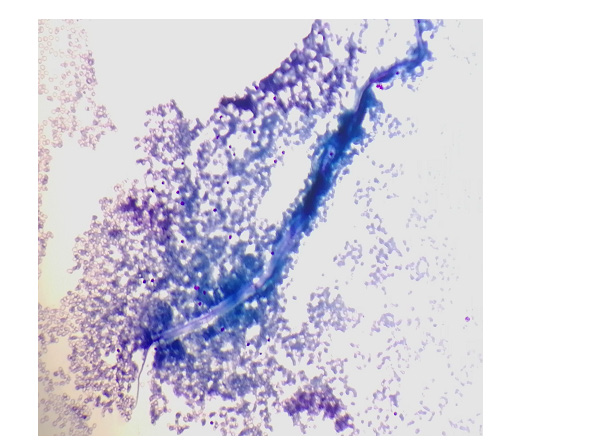 The typical lymphatic filariasis clinical pictures is characterized by lymphoedema and hydrocele [1]. Our report refers to a migrant from Nigeria, a country considered endemic by WHO [2]. Our patient showed typical filariasis symptoms, revealing left lower limb lymphoedema with elephantiasis. Furthermore , from the laboratory point of view this patient showed a marked eosinophilia typical of tissues invasive parasitosis such as lymphatic filariasis [3]. The microbiological diagnose showed the presence of Wuchereria bancrofti microfilariar on a blood sample; however, it is also possible to diagnose LF by serological and molecular methods [4]. From the point of view of HIV-filariasis coinfection, while a significant difference in the prevalence of filariasis disease between HIV positive and HIV negative is not demonstrated in endemic countries [5], on the other hand, a significant increase in the risk of acquiring HIV has been shown for individuals with heartworm infection [6]. Of great importance is the problem of access to anthelmintic therapy. Due to migratory flows, in Europe there is an increase in cases of NTD and at the same time the difficulty in finding drugs [7],in fact, in accordance with the guidelines of the Italian Society of Tropical Medicine, we would have treated, if the patient had not decided to withdraw consent to the treatment, filariasis according to the ivermectin + albendazole scheme [8], and not with diethylcarbamazine due to difficulty in finding this’ last (Figure 1).

In conclusion, the possibility of lymphatic filariasis, or other NTD, should always be considered in patients from endemic areas, however, especially in Europe, there is difficulty in accessing treatment. Further studies are needed to better characterize Wuchereria bancrofti infection in the patient with HIV disease.

The authors declare no potential conflicts of interest.

Lymphatic Filariasis in a Migrant Patient with HIV Infection

Lymphatic filariasis (LF) is a neglected tropical disease according to the World Health Organization. The disease has different symptoms caused by adult worms that occupy and block the lymphatic vessels. In this document we introduce a case of lymphatic filariasis caused by Wuchereria bancrofti in a nigerian migrant patient affected by HIV infection.