Experimental and theoretical research on [Cu (dipic) (H2O2)¬]n (1) has been studied. This polymer for the first time has been synthesized under the mild condition from the reaction of Pyridine-2, 6-dicarboxylic acid (dipic), and Cu (NO3)2⋅3H2O solution under ultrasonic irradiation. (1) was confirmed using the FT-IR spectrum and moreover, the structure of this polymer was certified by single-crystal X-ray diffraction. Analysis of the highest occupied molecular orbital (HOMO) and lowest unoccupied molecular orbital (LUMO), Molecular Electrostatic Potential (MEP) of the monomer of this polymer have been considered using the DFT method. A molecular docking investigation for the prediction of the ligand-receptor interactions has also been reported. This complex was active against Escherichia coli.

Metal-organic polymers are one of the most interesting materials [1]. These compounds have different properties and can be applied as a catalyst in coupling reactions [2], pollution control [3], and anionic polyelectrolyte hydrogels [4]. Polymers supported metals are a significant group of polymers that consist of the coordination of polymeric ligands with transition metal ions [5]. Nowadays, the polymer-supported metal is synthesized with modified structures as various monomers and variant properties [6]. This modified polymer as a ligand has high chemical stability due to its different properties and interesting behavior and is very important for the composition of metal ions. These compounds with hydrophilic properties were investigated in a polymer containing immunodiastates [7]. Polymer-copper (II) complex was studied as a catalyzed conversion of aldehydes to primary amides [8]. These polymers have been applied with various metals such as poly (maleic acid) poly metal complexes with transition metals just as Cu (II), Co (II), Ni (II), and Zn (II) [9]. It is attributed to the formation of stable mononuclear copper (II) complexes with hydroxyl groups of Poly (acrylic acid) is also studied [10,11]. Poly [4-Imino (N-4- ethyl benzoate) benzene p-styrenesulphonate] and the ability of the polymer to release the drug have been investigated [12]. These results prompted us to synthesize and evaluate (1) in a new method. In our previous research, we reported 4-acetylaminobenzene -p-styrene sulphonate and its polymer as a prodrug in controlled release technique [13] and polymer-supported amino acid for alkylation of arenes [14]. On the other hand, metal complexes have special properties such as antimicrobial effects and biological activity [15,16]. Copper is a necessary element in the human body that is a noticed cofactor for many enzymes and extracellular proteins. The deficiency of copper ions in the human body has an effect on the production of white blood cells. In adult humans, the net absorption of dietary copper is approximately 1 mg/d [17]. Copper has long been known to have antimicrobial activity and is used in water drinking refineries. In 2008, it has been recognized by the US Environmental Protection Agency as the first metallic antimicrobial agent. Antimicrobial applications of copper have been reported [18]. Recently, the synthesis of metal-based drugs has been considered. Then, studying the interaction of metal complexes and HSA is very attractive for researchers. In this work, we investigated the interaction of monomeric (1) with HSA and 2JVU using molecular docking methods to evaluate the medicinal properties of this compound as a biocompatible material and an antibacterial agent.

Pyridine-2, 6-dicarboxylic acid, NaOH, Cu (NO3)2⋅3H2O were obtained from commercial sources and used as received. The water was distilled and deionized. Elemental analyses (C, H, and N) were measured on Perkin-Elmer 2400 II elemental analyzer. The FT-IR spectrum was measured as KBr discs in the region of 4000-400 cm-1 on a Jasco FT/IR-430 spectrometer. Crystallography data and structure refinement of (1) were collected on a STOE-IPDS 2T diffractometer equipped with a graphite monochromator and Mo Kα radiation (λ=0.71069 Å)

The monomer of (1) was calculated using Gaussian 09 software [20]. The computation including geometry optimization (optfreq), MEP, FT-IR spectrum, and HOMO – LUMO analysis were applied using B3LYP/6-311G (2d, 2p) [21]. A modeling and docking tool was performed to predict the activity of the monomer [22]. As mentioned before, the monomer of (1) as a compound was optimized by using the B3LYP method 6-311G (2d, 2 p) basis set and prepared for docking. The structure of Escherichia Coli and HAS (human serum albumin) were obtained from Protein Data Bank, respectively, (PDB ID: 2jvu, 1AO6). Auto Dock software is a new tool to get an insight into ligand-receptor interaction and screen molecules for the binding affinities against a receptor. These molecular docking computations were performed on Auto Dock software. The most popular algorithm, the Lamarckian Genetic Algorithm (LGA), in Auto Dock for this docking was employed [23,24].

The minimal inhibitory concentration (MIC) is determined by preparing solutions of the chemical in vitro at increasing concentrations, incubating the solutions with separate batches of cultured bacteria, and measuring the results using agar dilution. It is used to measure the Minimum Inhibitory Concentration [MIC] of an antimicrobial agent, which is the lowest concentration of antimicrobial agent which will prevent the growth of microbes. The MIC of the (1) as an antibacterial agent against Escherichia coli will be reported in the next section. The (1) was tested for its antibacterial activity Escherichia coli as Gram-negative bacteria by the disk diffusion method [25].

For this work, 3.80 g of Nutrient-Agar (NA) medium was dissolved in 100 mL of distilled water. This solution was sterilized at 120 °C for 20 min in an autoclave. Then, 20 mL of this solution was solidified in a Petri plate.

The synthetic route for the preparation of (1), as explained in the experimental section, is schematically represented in Scheme 1.

The calculated optimized geometry of monomer (opt-freq) using B3LYP/6-311G (2d, 2p) of monomer and crystal structure are shown in Figure 1.

Predicting electrophilic and nucleophilic attacks for biological interactions by using MEP (Molecular electrostatic potential) as an important tool was shown [26,27]. The geometry of dipic (pyridine-2, 6-dicarboxylic acid) and monomer of (1) were optimized using the B3LYP method 6-311G (2d, 2p). As in Figure 3 can be observed, the different colors are indicated different values of the electrophilic and nucleophilic potential. Red< orange < yellow < green< blue. The blue illustrates the strongest attraction, and this area (positive area) is located around CH groups. The negative area (red color) is related to C=O and O-H groups over the electronegative oxygen atoms. These regions of negative potential are associated with the lone pair of electronegative atoms. The nitrogen of pyridine and oxygen of hydroxyl anion is coordinated to Cu and lead to form (1).

Scheme 1: The reaction involving synthesis of (1).

Figure 1: Calculated optimized geometry of monomer (in the left) and its Crystal structure (in the right). 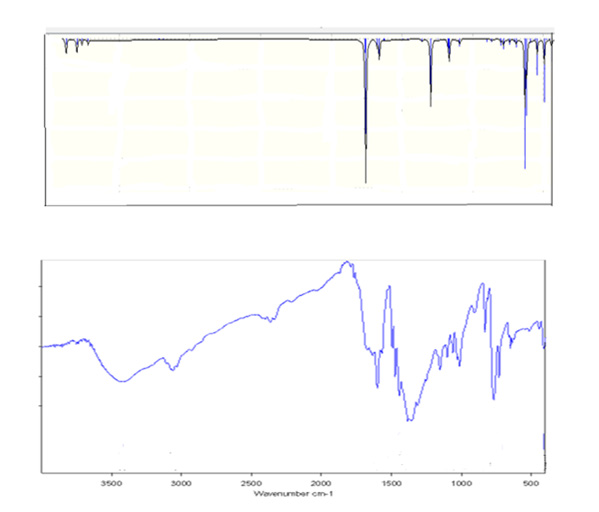 Analyzing the highest occupied molecular orbital (HOMO) and lowest unoccupied molecular orbital (LUMO) is important in a molecule as a compound. Soft systems are large and highly polarizable, while hard systems are relatively small and much less polarizable. For the comprehension of various aspects of drug design and their properties, several new chemical reactivity descriptors have been proposed [28]. The LUMO energy explains the ability to accept an electron and the HOMO energy is related to the ability to donate an electron. Both the HOMO and the LUMO, play a significant role in the electrical properties and chemical activities in the compound [29,30]. The HOMO and the LUMO orbital energy are important parameters to predict the chemical properties of a compound. The HOMO and the LUMO orbital energy of dipic (2) and an aqueous solution of [Cu (dipic) (H2O)2] (3) are calculated at the B3LYP method 6-311G (2d, 2p) basis set. The energy values (2) and (3) are, EHOMO-1 = -0.107 and -0.155 EHOMO = - 0.369 and -0.265 eV, respectively. The energy difference (gap) between the HOMO and the LUMO is 5.796 and 3.468 eV, for (2) and (3), respectively. These energies of HOMO and the LUMO orbitals of compounds are negative showing that these compounds are stable and do not decompose spontaneously into their elements. According to Parr, et al. [31]. A molecule with a high energy gap is less polarizable and is termed a hard molecule. The softness (strongly polarizable) can be explained by the deformation of electron cloud and polarization of chemical systems during the chemical process. By using the HOMO and the LUMO orbital energies, the ionization energy and electron affinity can be calculated as: I = - EHOMO =0.107 and 0.155 eV for (2) and (3), respectively, and A = - ELUMO = 5.796 and 3.468eV for (2) and (3), respectively. The global hardness η and chemical potential μ are given by using the relation η = 2.898 and 1.734 eV and μ =5.502 and 5.483 eV global electrophilicity = μ 2/2 η = 5.226 and 8.668 eV for (2) and (3), respectively. The atomic orbital components of the frontier molecular orbital are shown in Figures 4 & 5.

A microbial suspension (1 mL) of Escherichia coli was spread over the surface of an agar plate, which was incubated for 24 h at 37°C in an autoclave. Inhibitory zone values (diameter of inhibition) from disk diffusion tests and growth inhibition ring for cu complex were reported in Table 1 and Figure 6. 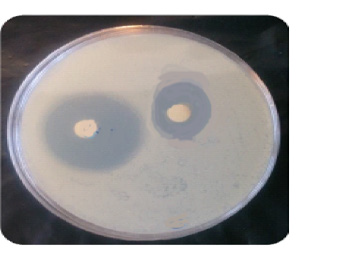 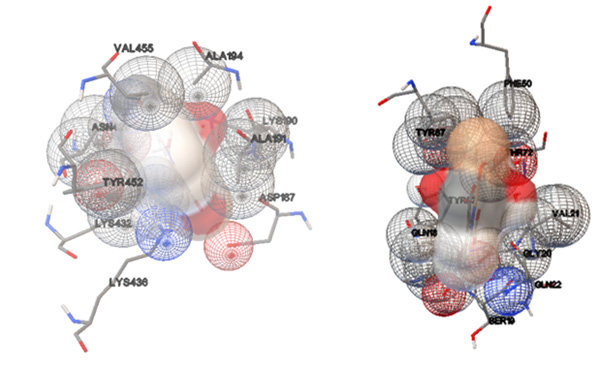 The study of molecular docking is a significant tool for the prediction of the ligand-receptor interactions [32] and was performed to indicate the HSA and 2JVU-binding site for the cu complex. The crystal structures of HSA and Escherichia coli (PDB ID: 1AO6, 2JVU) were taken from the Protein Data Bank, respectively. These crystals were prepared for the docking system. Flexible ligand docking was carried out by Auto Dock 4.2.5.1 molecular docking program using the implemented empirical free energy function and the Lamarckian Genetic Algorithm. We decided to show this compound has an antimicrobial property in the human body. The cu complex as a ligand was prepared for docking by using the B3LYP method 6-311G (2p, 2d) basis set. In the first step, the docking of the cu complex with 1AO6 and 2JVU, a blind docking with 126 lattice points along X, Y, and Z axes was performed to find the binding site of the complex on these crystals with a grid point spacing of 0.375 Å, to allow the complex to rotate freely. In the next step, the second docking was performed using a cubic box with 60×60×60 Å dimensions. Among the docked conformations, the best-scored conformation predicted by the Auto Dock scoring function was visualized for complex-HSA and complex-2JVU interactions in Auto Dock software. The resulting docking for the obtained molecular docking in which the Cu complex binds into HSA and 2JVU, as a receptor is illustrated in Figure 7. The HSA creates one hydrogen bond with the (1), which includes LYS436. The 2JVU forms one hydrogen bond, which is UNK1. There are hydrophobic contacts between Cu complex with HSA (VAL 455, ALA194, LYS190, ALA191, ASP187, LYS436, LYS432, TYR452, ASN429) and 2JVU (TYR87, PHE50, GLN18, THR72, VAL21, TYR23, SER19, GLN22, GLY20), respectively. The binding free energies (ΔG°) of -6.55and -5.94 kcal mol-1 were predicted for HSA and 2JVU in the best conformation of the ligand.

We report that (1) as a new polymer-supported metal has been synthesized for the first time from the reaction of Pyridine-2, 6-dicarboxylic acid, and Cu (NO3)2⋅3H2O solution under ultrasonic irradiation in the mild condition. (1) was confirmed using FTIR spectrum and single-crystal X-ray crystallography. Molecular electrostatic potential and frontier molecular orbital analysis were indicated polymer-supported cu due to special property that can be designed for a new drug. This study leads us to the conclusion that this polymer has antibacterial properties. These results of biological research confirmed that (1) can be used to design and synthesize new based-drug materials.

We would like to thank Lorestan University for its financial support.

Experimental and theoretical research on [Cu (dipic) (H2O2)¬]n (1) has been studied. This polymer for the first time has been synthesized under the mild condition from the reaction of Pyridine-2, 6-dicarboxylic acid (dipic), and Cu (NO3)2⋅3H2O solution under ultrasonic irradiation. (1) was confirmed using the FT-IR spectrum and moreover, the structure of this polymer was certified by single-crystal X-ray diffraction. Analysis of the highest occupied molecular orbital (HOMO) and lowest unoccupied molecular orbital (LUMO), Molecular Electrostatic Potential (MEP) of the monomer of this polymer have been considered using the DFT method. A molecular docking investigation for the prediction of the ligand-receptor interactions has also been reported. This complex was active against Escherichia coli.