The term Cameron lesions denotes the presence of linear erosions or ulcer on the crests of gastric folds in the distal neck of hiatal hernia. They are well described distinct clinical entity more often asymptomatic and associated with chronic anemia, while less often represent the source of profuse upper gastrointestinal bleeding. Not infrequently Cameron lesions are overlooked at endoscopy due to technical and anatomical difficulties. They can also be the subject of diagnostic doubt when chronicity of mechanical and ischemic trauma leads to deep callous and fibrotic ulcer that resembles neoplastic lesion. We describe a patient with overt gastrointestinal hemorrhage in whom Cameron lesion was misperceived as neoplastic lesion resulting in extensive and prolonged diagnostic evaluation. Endoscopists and gastroenterologist should be well aware of this condition and have it in consideration in all patients with acute gastrointestinal bleeding, particularly in those with hiatal hernia with or without chronic anemia.

Hiatal hernia (HH) is a common endoscopic finding noted in up to 50% of upper endoscopies performed for another indication [1]. Clinically, HH are predominantly asymptomatic, but can be associated with several complications including gastroesophageal reflux disease [2], iron deficiency anemia [3], acute or chronic bleeding [4], and presence of linear erosion/s or ulcer/s [1]. The latter are found on the crests of gastric mucosal folds at the diaphragmatic impression, and are termed under one name as Cameron lesion/s [1]. Typically, they appear as multiple linear lesions which are frequently associated with chronic occult blood loss and chronic anemia but sometimes, can be the source of life-threatening gastrointestinal (GI) hemorrhage [5,6]. Chronic mechanical trauma and ischemia exerted on the gastric mucosal folds as they move against the diaphragm can be complicated by penetrant ulcer formation. Diagnosis may be challenging as they can be overlooked during endoscopy due to the technical difficulty of endoscopic visualization [7]. Here, we present a case with acute upper GI hemorrhage due to deep penetrant and necrotic ulcerated Cameron lesion which was readily located but misinterpreted as neoplastic lesion based on the endoscopic appearance.

A 58-years old man was referred to our Clinic due to the presence of black tarry stools in the last 3 days, accompanied by weakness and malaise. He also noted that in the previous month had been experiencing dyspeptic complaints. The past clinical history was significant for successful eradication therapy for Helicobacter pylori infection 4 years ago, soon after followed by upper GI endoscopic evaluation for prolonged dyspepsia showing sliding hiatal hernia with moderate gastroesophageal reflux erosions. Three years ago, right nephrectomy was performed for renal carcinoma while more than 10 years ago he underwent cholecystectomy due to gallbladder stones. He was on regular antihypertensive therapy, denying use of aspirin or nonsteroidal anti-inflammatory drugs (NSAIDs) and had stopped using proton pump inhibitor (PPI) for the gastroesophageal reflux 1 year ago. Biochemical analysis upon admission revealed a reduction in hemoglobin (112 g/L) and mild rise in blood urea nitrogen (9.5 mmol/L). Rectal examination showed traces with dark green and black discoloration. Upon clinical assessment the patient appeared hemodynamically stable with blood pressure of 135/95 mmHg, oxygen saturation of 95% and heart rate of 86 bpm. At urgent upper GI endoscopy, a sliding hiatal hernia with mild gastroesophageal reflux erosions was found, and at endoscope inversion in the stomach a large prominent subcardial gastric fold which extended in the fundus was detected, with a centrally positioned 1 cm in size, deep penetrant ulcer with dark necrotic base. The corpus, antrum and duodenum were normal, and no signs of active or recent bleeding were noted. The patient was placed on nil per mouth and therapy with parenteral hydration and high dose PPI was started. Due to the atypical location of the ulcer with its endoscopic appearance and the clinical presentation of the patient, a control gastroscopy was performed on the 2nd day. The subcardial gastric fold appeared very prominent and bulging with centrally located deep ulcerated lesion, this time with white fibrin base.

Based on this appearance a suspicion for ulcerated neoplastic lesion and possibly gastric submucosal tumor was made, so consequently biopsies from the margins of the ulcer were taken. Histopathological assessment confirmed the absence of neoplastic alterations. As endoscopic ultrasound is not routinely available at our clinic and expertise is lacking, contrast computed tomography (CT) of the abdomen was performed. Findings (Figure 1) were consistent with thickening of the gastric fundic folds with welldefined zone of hypoattenuating oedematous submucosa, and absence of lymph node enlargement. Thus, upon CT evaluation there were no convincing signs of submucosal necrotic lesion. After one week at another control gastroscopy the gastric ulceration was still present (Figure 2), though reduced in depth, with converging thickened prominent gastric folds, so that multiple biopsies were repeated on the lesion. Histological lesions of fibrosis, chronic inflammation and intestinal metaplasia were identified with absence of neoplastic cells. After 1 month on high dose PPI therapy a further endoscopy (Figure 3) was performed showing regression of the ulcer with stellar cicatrix, normal appearing mucosa and voluminous edematous gastric folds. The evolution of the endoscopic and histological changes, location of the ulcer and the presence of HH led us to conclude that this is a Cameron lesion. The patient was continued on long-term high dose PPI therapy and after radiological assessment of the HH was referred for surgical management given the clinically symptomatic HH and initial depth of the ulcer with possible future complications. Upon laparoscopic surgery a large hiatal hernia was identified and further surgical exploration didn’t identify signs of neoplastic intramural lesions. The hiatal opening was about 5 cm wide with herniation of the uper part of stomach. The hernia sac was completely dissected and excised with crural exposure after wich cruroplasty was performed with non-absorbable interrupted sutures. In order to have better reflux control a Dor fundoplication was performed (Figure 4). The patient had uneventful recovery. 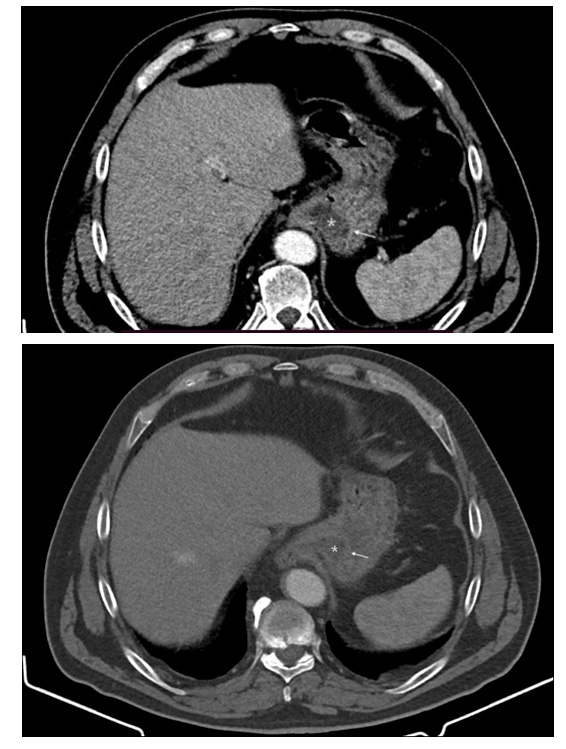 Figure 1: Contrast CT of the abdomen demonstrating thickened gastric folds in the fundus of the stomach, adjacent to the diaphragm due to well defined hypoattenuating oedematous submucosa (*) and discrete enhancement of hyperaemic mucosa (thin arrows). 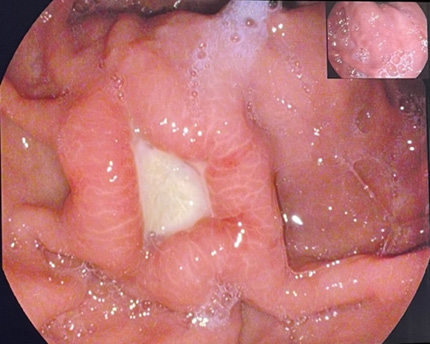 Figure 2: Ulcer presentation at control gastroscopy after one week of initial presentation. 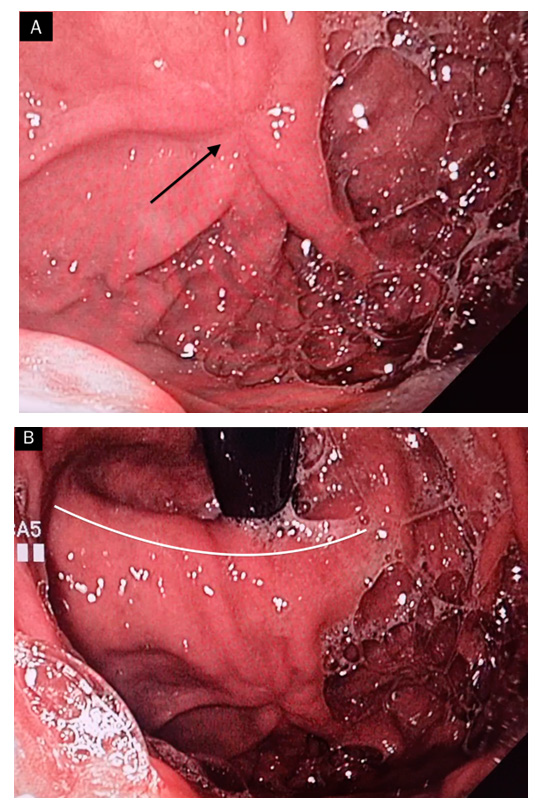 Figure 3: a and b: Control gastroscopy after 1 month. Complete resolution of the ulcer with presence of stellar cicatrix (black arrow) on edematous and voluminous gastric folds near the level of the diaphragm impression (white line) at the neck of the hiatal hernia.

b. Crural exposure with complete dissection and excision of the hiatal sac.

Cameron lesions were first described by Cameron and Higgins in 1986 [6]. Their prospective study including 109 patients with endoscopically proven HH revealed the association of anemia with HH. Anemia was present in 50.5% of the patients (group 1), while 49.5% were not anemic (group 2). In 41.8% of patients in group 1 they identified presence of linear gastric erosions on mucosal folds near the diaphragmatic level which were termed Cameron lesions, and the same were identified in 24% of patients in group 2. Despite being long-known entity, they remain underdiagnosed and underappreciated source mostly for chronic occult blood loss resulting in repetitive GI endoscopic evaluation [7,8]. The prevalence as to be expected is dependent on the size of the HH, reaching to 13% in large hernias (>5cm) [9]. The proposed primary causes of their development are the mechanical trauma and local ischemia exerted on the gastric mucosal folds as they move against the diaphragm [5,10]. They are considered as non-peptic gastric lesions which is supported by the lack of significant positive association with NSAIDs and aspirin use or Helicobacter infection, although mucosal peptic injury can contribute to their formation [1,5,11]. In support of this is that a relatively good proportion of patients have a good outcome with acid suppression therapy [12]. Gastrointestinal bleeding is the consequence of HH associated with Cameron lesion. Most often it is chronic and occult, with irondeficiency anemia, while acute, life-threatening GI hemorrhage is less frequent [8]. They are diagnosed at endoscopy, but their visualization in the hernial sac can be challenging, so a thorough antegrade and retrograde endoscopic assessment is crucial [6,8]. Detection of shallow lesions can be further improved with the use of narrow band imaging (NBI) or magnification chromoendoscopy [13]. At endoscopy, Cameron lesions usually present as single or multiple linear erosions resembling aftoid lesions [6], though deep, fibrotic or necrotic ulcers, as presented in our case, can also develop [14,15]. Additional accompanying findings such as edematous and erythematous surrounding gastric mucosal folds, ecchymotic bleeding can be noted [6].

Erosions and ulcers are termed under one name as Cameron lesion/s to avoid the difficulty of differentiating between erosion or ulcer during endoscopy [1]. Deep lesions can potentially present with visible vessel, and this has been described in one case report where band ligation of the ulcer resulted in successful treatment of life-threatening GI bleeding [16]. In our patient, despite the presence of HH, the depth of the lesion and necrotic base, the atypical localization for an ulcer as well as the pronounced edema of the surrounding gastric folds entangled the diagnosis. Although the CT excluded presence of submucosal lesion we decided to perform additional follow-up endoscopic evaluation for assessment of the healing of the lesion. It was after repeated histological evaluation and demonstration of regression under PPI the lesion was diagnosed as Cameron lesion. Data from the literature shows that therapy of Cameron lesions is mainly PPI [15]. However, use of standard PPI therapy is noted in significant proportion of patients diagnosed with Cameron lesions [8], therefore long-term high dose PPI therapy is necessary. Endoscopic hemostasis is rarely reported and most patients are treated conservatively [15]. In case of actively bleeding lesion endoscopic treatment can be difficult due to anatomical and technical reasons [16] necessitating urgent surgery. For patients who fail medical management surgical HH repair is an option. The distinct pathophysiology of Cameron lesions makes them unique entity and many experts have suggested that relieving the mechanical stress at the neck of the hernia is more adequate for long term resolution. (Verhoeff, et al. [17]) compared surgical and medical treatment of Cameron lesions in their systematic review and meta-analysis. Surgery was superior with 92% therapeutic success compared to 67% for medically managed patients. As demonstrated in our case presentation, presence of dyspeptic complaints associated with HH and occurrence of deep penetrant Cameron lesion were the deciding factors for referral to surgeon. Moreover, slow healing of the lesion was detected while on highdose PPI therapy. This led us to conclude that surgical repair would be of greater benefit both for resolving current Cameron lesion and for preventing future complications, primarily life-threatening GI bleeding and perforation.

Cameron lesions are long-known well described clinical entity, but still remain challenging diagnosis that can be overlooked or misinterpreted. Endoscopists and gastroenterologists should be well aware of this disorder when evaluating a patient with HH, especially in the context of chronic anemia, and detailed evaluation of the hiatal sac should be performed to avoid future unnecessary endoscopic evaluations. Chronic mechanical and ischemic trauma of the gastric folds in the neck of large HH can result in deep ulcer formation presenting with acute, sometimes, life-threatening GI hemorrhage. Misperception of deep, fibrotic and necrotic lesions as neoplastic lesions can result in extensive diagnostic work-up. Medical therapy has a good success, but patients with Cameron lesions associated with large HH (> 5 cm) and those who failed medical therapy should be offered surgery.

The term Cameron lesions denotes the presence of linear erosions or ulcer on the crests of gastric folds in the distal neck of hiatal hernia. They are well described distinct clinical entity more often asymptomatic and associated with chronic anemia, while less often represent the source of profuse upper gastrointestinal bleeding. Not infrequently Cameron lesions are overlooked at endoscopy due to technical and anatomical difficulties. They can also be the subject of diagnostic doubt when chronicity of mechanical and ischemic trauma leads to deep callous and fibrotic ulcer that resembles neoplastic lesion. We describe a patient with overt gastrointestinal hemorrhage in whom Cameron lesion was misperceived as neoplastic lesion resulting in extensive and prolonged diagnostic evaluation. Endoscopists and gastroenterologist should be well aware of this condition and have it in consideration in all patients with acute gastrointestinal bleeding, particularly in those with hiatal hernia with or without chronic anemia.