Mental depression can now be treated safely without drugs or side effects. The treatment takes five minutes and can also be done to improve general health.

Pharmaceutical Drugs Can Cause Permanent Harm

A person depressed is immersed in gloom. For them, everything is bad, they see no hope. They are constantly exhausted. Their glass is always half empty and all the traffic lights are at red. They may well blame someone. They drag down all those close to them and can cause mental depression in others. This is a common plight that is not cured by modern pharmaceutical medicine or drug wielding psychiatrists. A doctor will prescribe an anti-depressant drug to help the patient cope. All that does is switch off part of the brain and prolonged consumption causes permanent brain damage. If they stop taking the drug, stress increases and in fear they become more drug dependant. Good business for the pharmaceuticals. There is no known drug that repairs thoughts. The brain is the hardware, in computer terms, and thoughts are the software. Depression is a software problem. Emotions can be chemically stimulated but there is no control. For example, alcohol shifts the mood towards extraversion and caffeine can shift the other way with an inability to relax and that causes harm. Thoughts out of control are dangerous. At one extreme a person can think they are invincible and at the other commit suicide. No doctor should ever consider mood shifting for medical healing.

The only way to manage thoughts is conversation. We used to follow the explanations of Sigmund Freud and snigger at the technique of a patient on the psychiatrist’s couch until the drug makers took over and repaired the brain chemically. If a patient was not helped by one drug, they were given an alternative with the explanation that they were not responding properly, the patient’s fault. This suited the doctors who are called general practitioners with ten minutes to process each patient. A conversation about a person’s troubles could take an hour. The patient, who was helpless, hence their depression, never complained other than to often demand a stronger dose. Long term follow-ups confirmed that the person was now coping. To cope with life was regarded as a cure. Drug dependency had been caused (Figure 1). 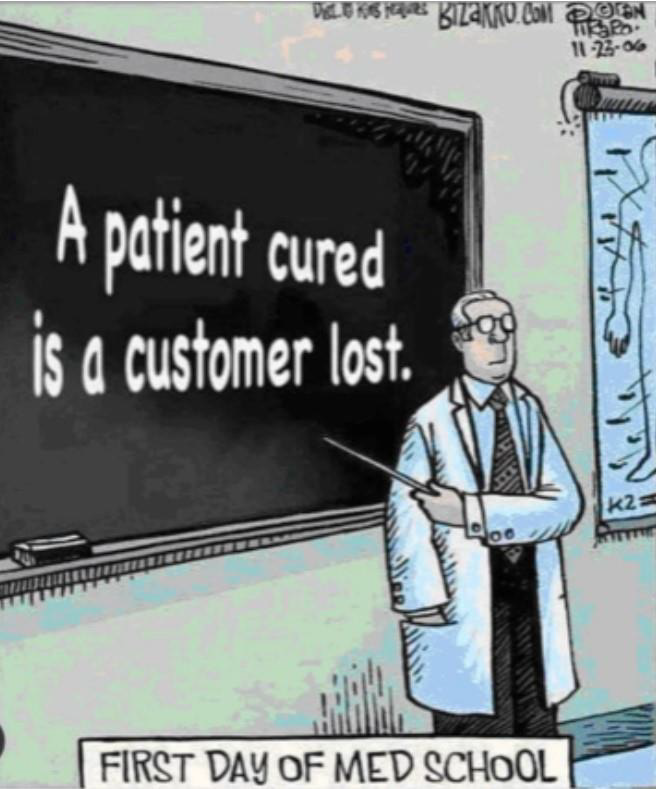 The Spectrum of Emotions

Below is a diagram of the spectrum of emotions. I used this first in an article about The Life Switch. When the mood is below normal, there is no healing. A depressed person is not just unhappy, they are ill. Aches and pains get worse. The immune system does not work. Add drugs to the helpless body and the immune system completely packs in (Figure 2). I observe, watch and listen to patients treated by Calsonic. A few weeks ago, a hunch that Cell Sonic is anti-depressant was confirmed. I visited St James Clinic in Birmingham to meet two lady professors from Poland when were interested in our technology. https://stjamesxh-clinic.com/. Here we are outside. I am the old man in a bow tie (standard garb for a professor) (Figure 3). The directors of St James are Hieu Tran standing between the ladies and Syed Ahmed on my left. The visiting professors are from Rzeszów University. Agnieszka Banas-Ząbczyk is on the left in the picture and Marta Kopańska is in the middle of the group. Both ladies were treated twice by the machine which at St James is called CS1. I explained what the machine does and how we understand it works on the body. The discussion then centred on the CS1 (Cell Sonic) making the patient feel happy. Hieu told of a miserable man who never smiled being seen after a treatment to be smiling. He told his friends it was the machine that did it.

Agnieszka said the same. She felt lifted, relaxed and welcomed more treatments. Marta agreed. Agnieszka said that neurons were being sent into the brain. Here is the machine (Figure 4). St James [1] have developed a standard procedure to treat the spine regardless of what the patient came to the clinic for. In the photo below, Hieu is showing the lady what to do. She is in the process of buying a machine for her own clinic (Figure 5). The protocol is 1,000 pulses at energy level 4.The treatment takes about five minutes with the machine banging at four a second. It can be felt but is not painful. Indeed, the patient enjoys the treatment. Three forces are emitted by the shock head (called a wand in America): pressure, electrical field and light. The spine is connected to the brain and all the organs (Figure 6). By treating the spine with Cell Sonic all the organs receive an electrical boost from the electrical field. There is no direct contact with an electrical charge from the machine (Figure 7). Credit and thanks are given to Dr Jerry Tennant for these illustrations [2]. His book and lectures on “Healing is Voltage” are first class (Figure 8-12). The frequencies needed to stimulate the cells and the related emotions are fully served by Cell Sonic because every pulse is a bang covering a full range of frequencies from high to low. 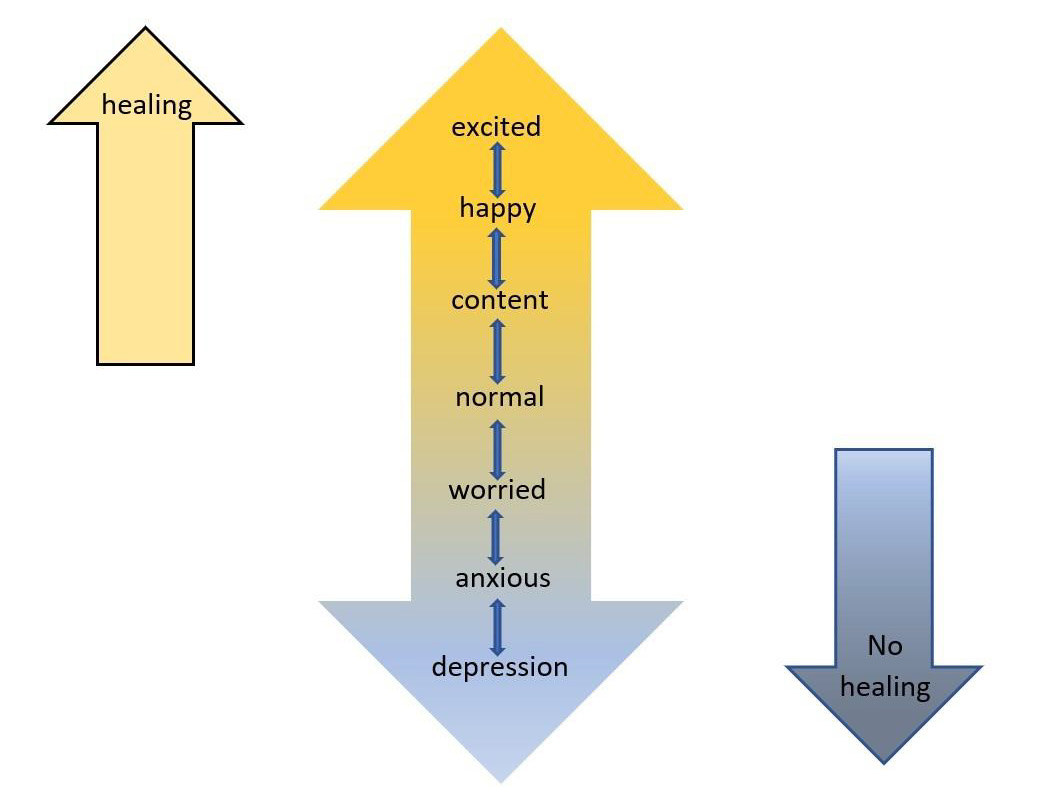 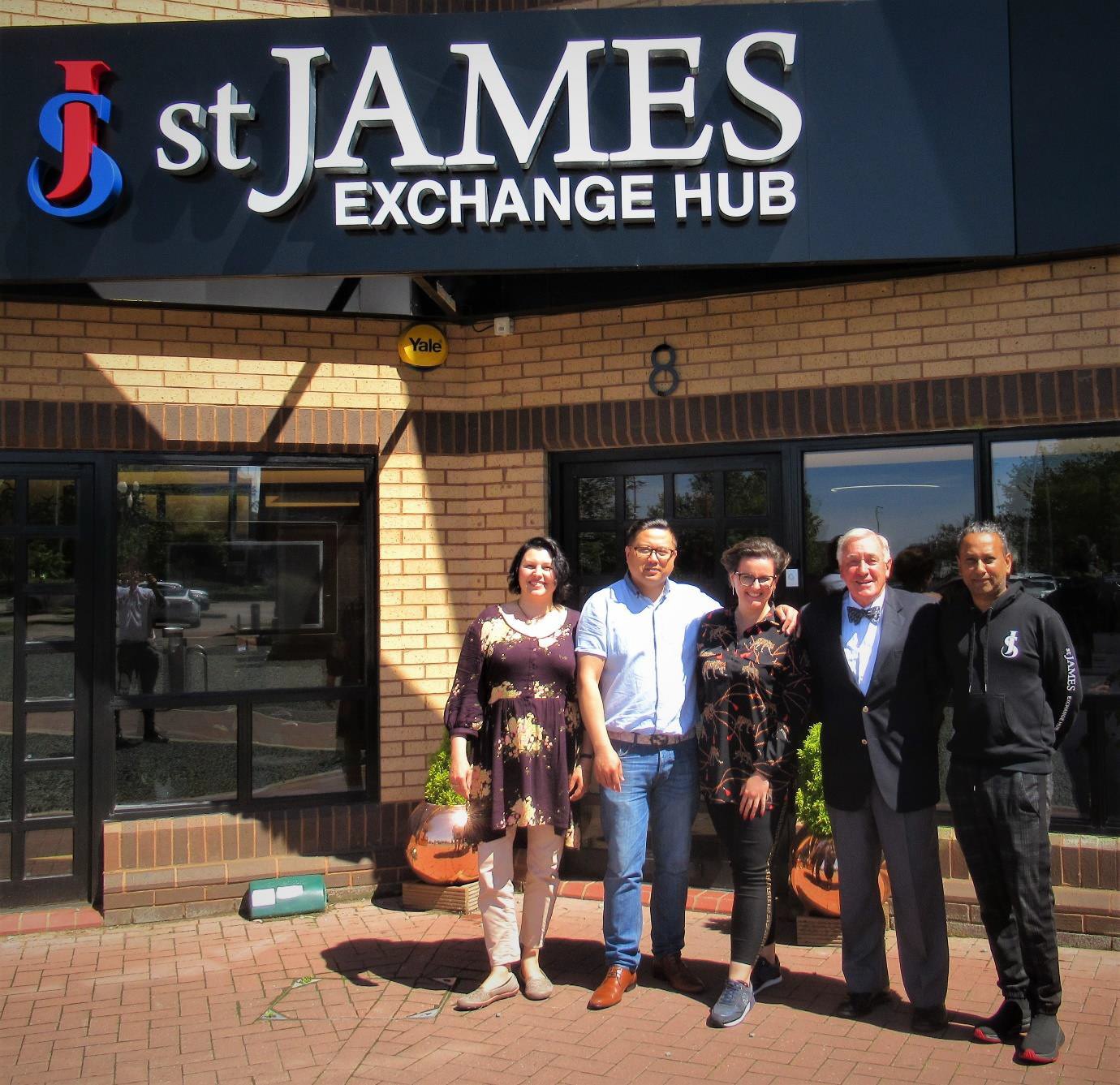 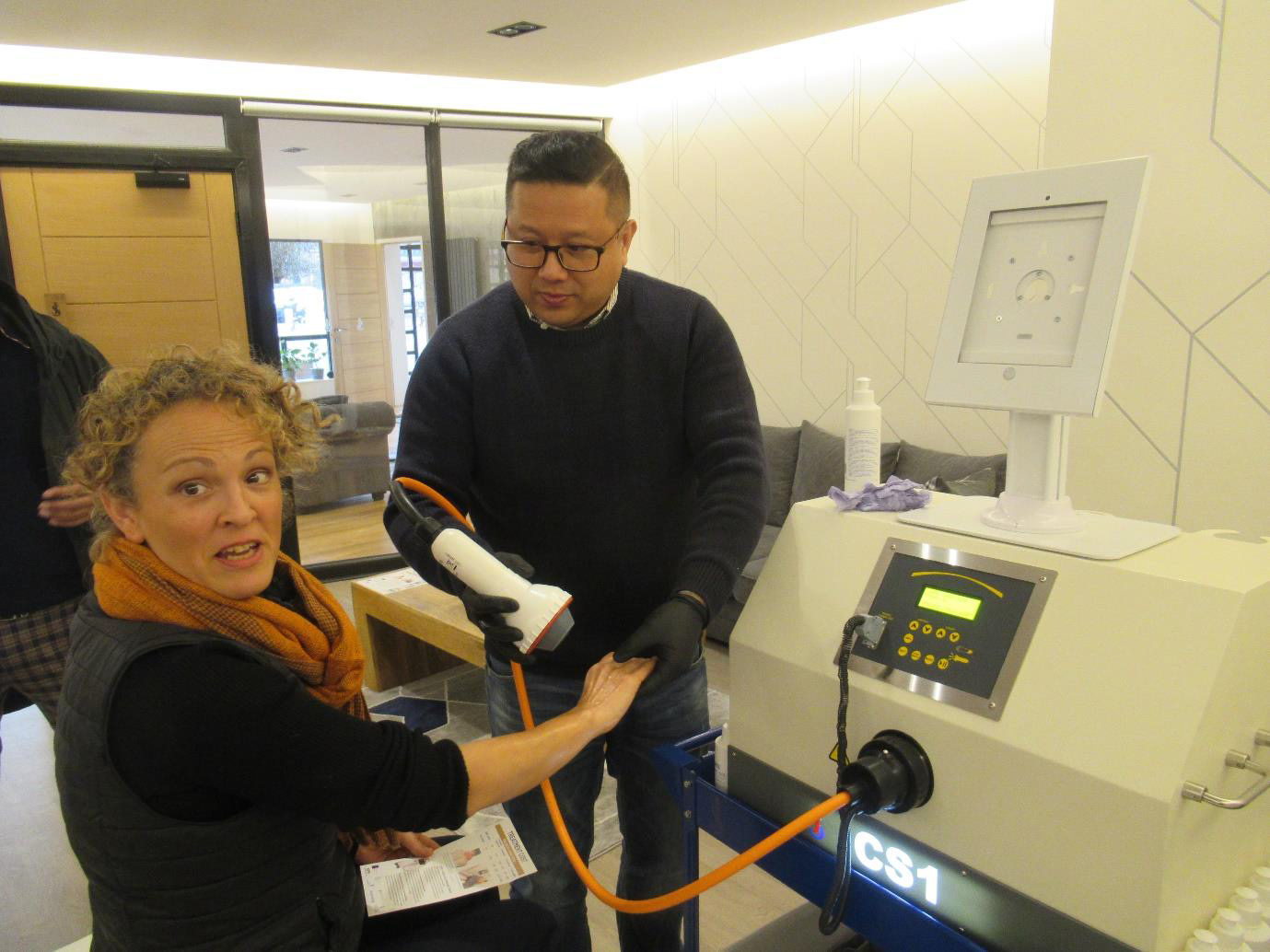 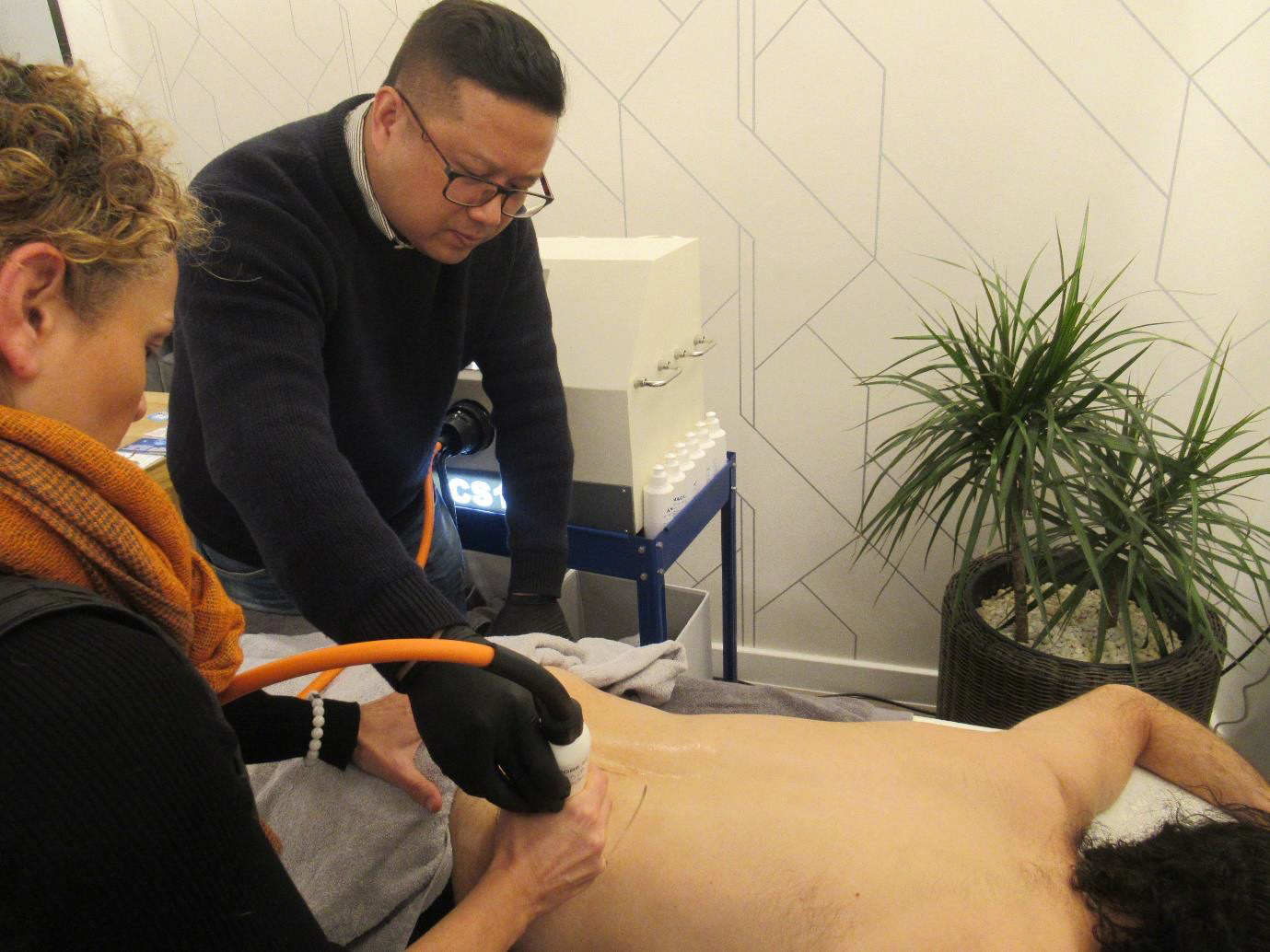 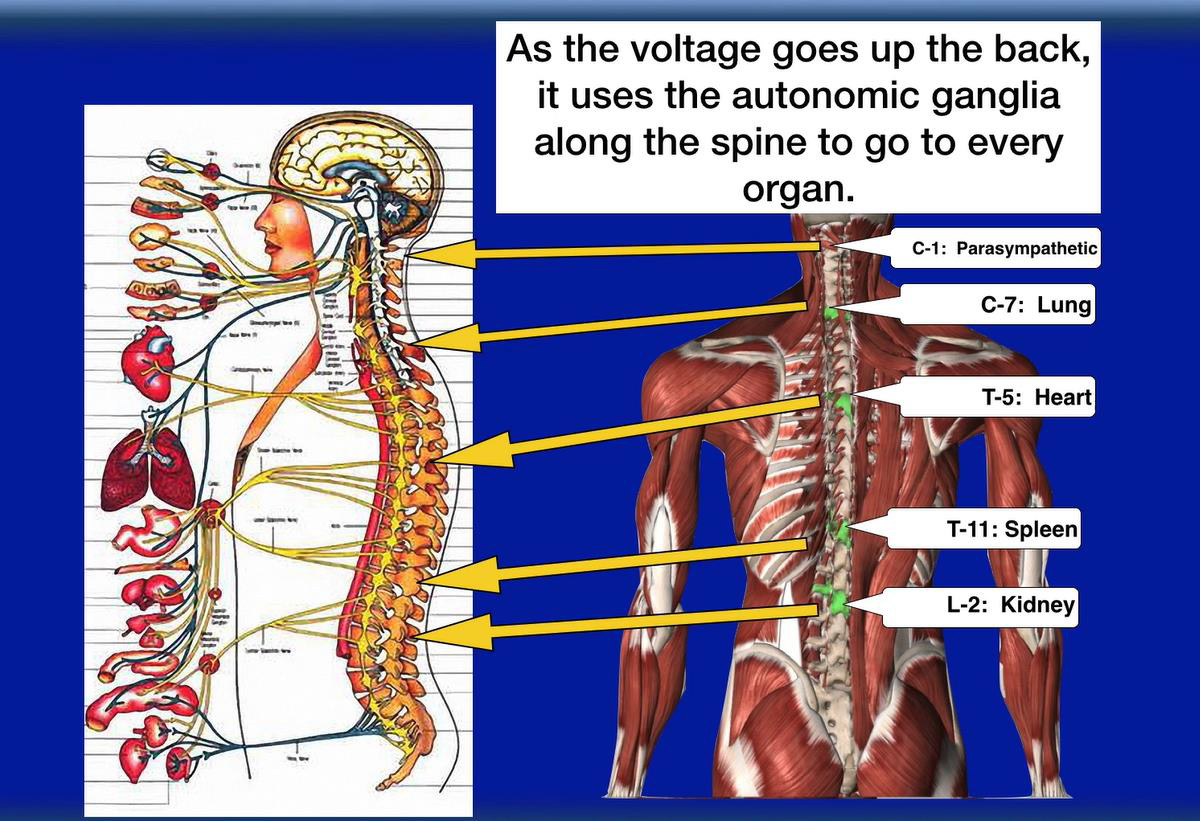 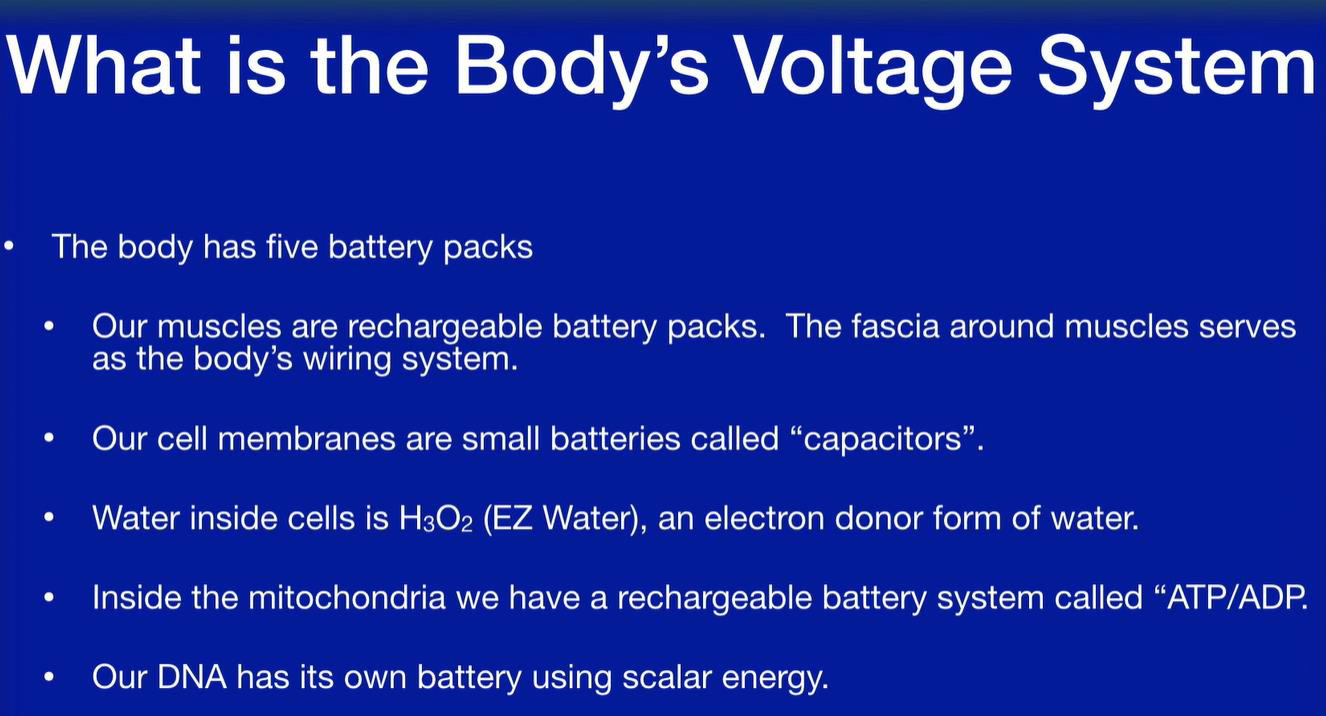 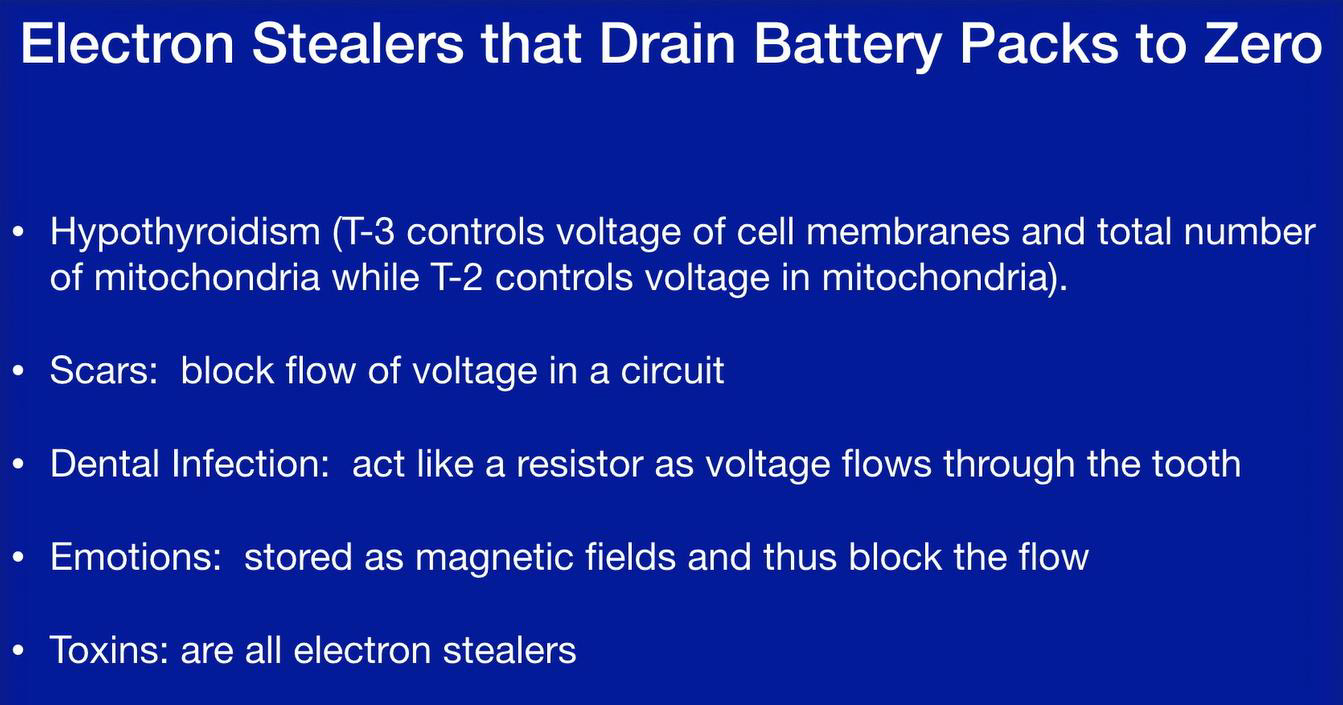 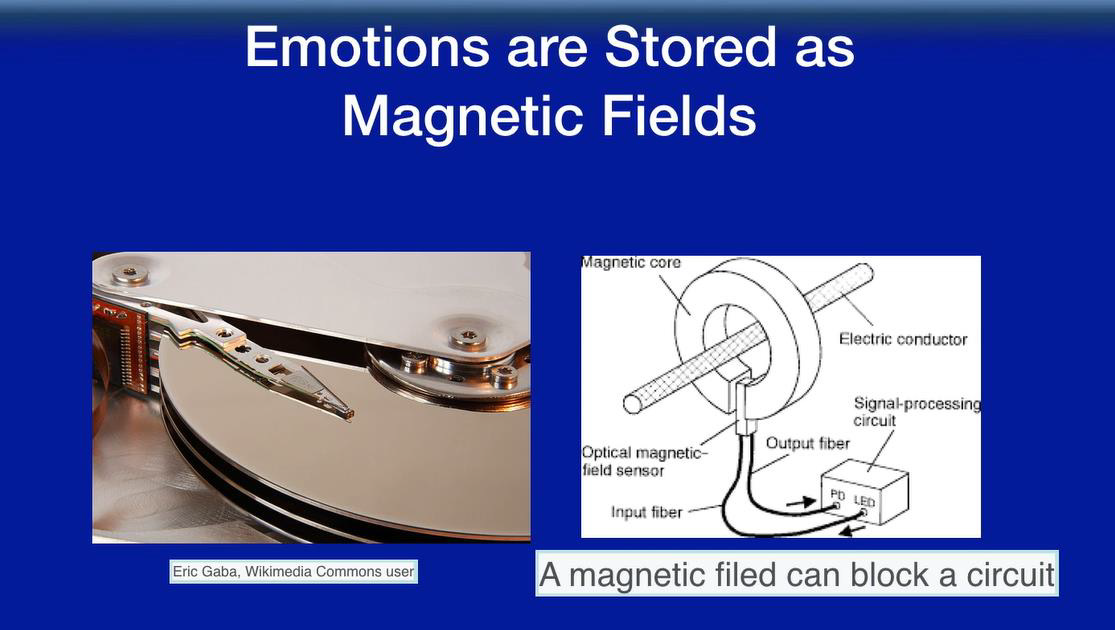 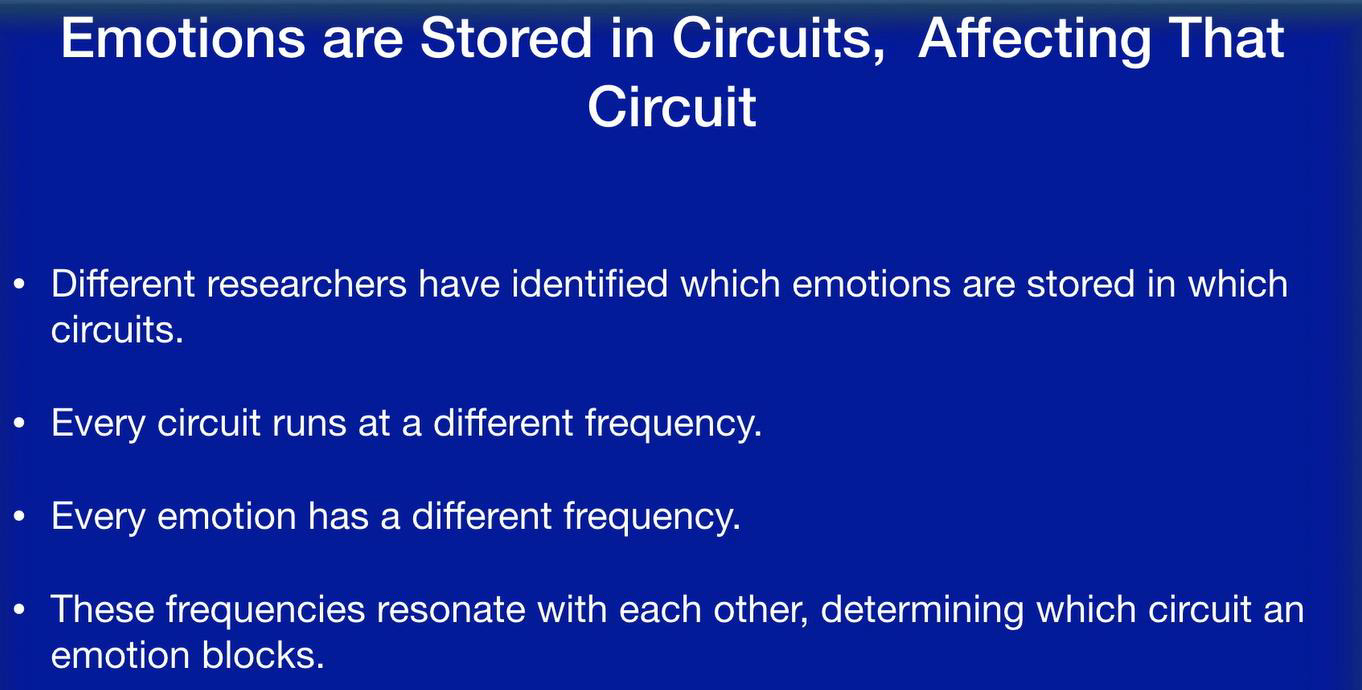 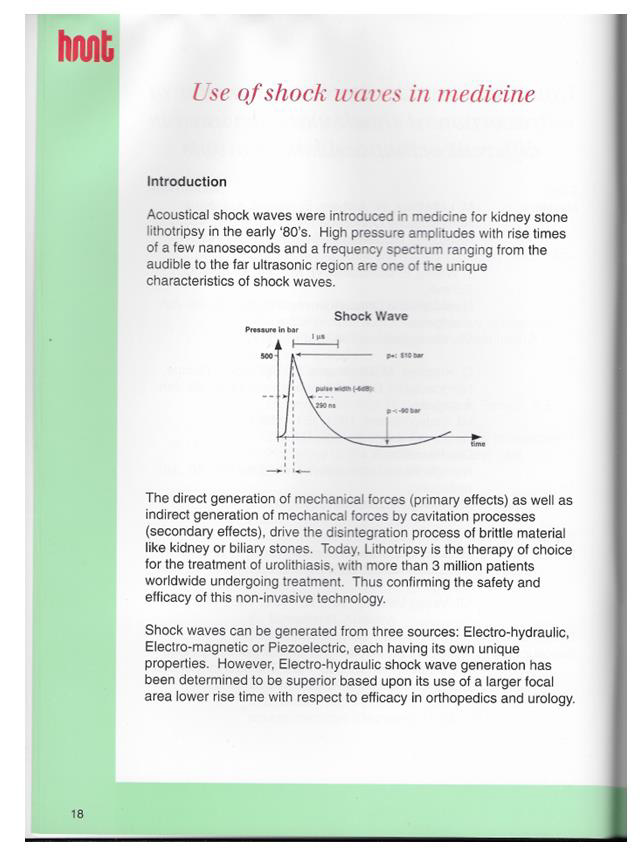 The very high frequencies are attained by the short rise time of a Cell Sonic pulse lasting a billionth of a second, the time taken for electricity to travel 1 mm as it shorts across the gap in the electrode of the shock head. The resulting sound and flash of lightning is the same as a thunderstorm but smaller. Here below is an explanation of shockwaves taken from HMT, a Swiss company I represented in Britain before they went out of business twenty years ago. Their problem was that doctors demanded endless clinical trials costing the company more than they could afford until they ran out of money. I then formed Cell Sonic and have avoided the pitfalls that beset HMT. The electrohydraulic system is far superior to other methods. Also important is the means of switching the high voltage passing through the electrode. Cell Sonic uses the fastest possible. Slower methods such as a cascade of thyristors cannot achieve the high frequencies needed to restore body cells. Breaking kidney stones is one thing. Generating cell restoration is another and only Cell Sonic has the frequency range needed [3,4].

The discovery that Cell Sonic reduces and helps remove mental depression is a valuable addition to the medical tool kit. Drugs are not used so there are no side effects. The effects have been observed for ten years and reported to me from different continents. In some cases, patients with brain disease are being treated with pulses aimed directly into the brain. Whether this is better than sending the neurons to the brain through the spinal cord remains to be seen. The brain is surrounded by bone as is the spinal cord, so the pressure and light parts of the pulse have little effect. That leaves the electrical field and in bursts of a billionth of a second at low energy levels, no side effects are detected. The mental improvements are accumulative. When the person grows new brain tissue or other parts of the brain take over from the parts damaged by drugs, the person is lifted into the upper half of the emotional spectrum where the immune system becomes active and thus starts the upward spiral of feeling better because the body is healing. When pain is stopped, proper sleep allows the immune system to work and the person is lifted out of gloom into a bright, smiling day.

Mental depression can now be treated safely without drugs or side effects. The treatment takes five minutes and can also be done to improve general health.