A 69-year-old male patient with a previous CCrCC presented a suspicious left IFT lesion in his Positron Emission Tomography with 18F-fluorodeoxyglucose (PET 18F-FDG) follow up, later confirmed with a Magnetic Resonance Imaging (MRI). It was indicated surgery and systemic therapy with sunitinib, axinitib and immunotherapy. He underwent a naso endoscopic surgical resection of the macroscopic lesion in the left IFT, which was confirmed by histopathological and immunohistochemistry studies to be a metastasis of the CCrCC primary tumor. In the first month of follow up, when additional radiotherapy was initiated, he started developing an unusual left facial pain and trismus. Continuous IFT debridements became necessary because of tissue necrosis and Pseudomona aeruginosa infection, for which clinical treatment was promptly initiated. He was treated with ciprofloxacin, nevertheless the facial pain got progressively worse as the radiotherapy carried on. He was diagnosed with actinic myopathy of the masticatory muscles and actinic trigeminal neuralgia (sphenopalatine ganglion, V2 and V3) due to muscle and maxilar and mandibular trigeminal sheath modifications found in the new MRI. Multiples lines of clinical therapy were attempted with dexmedetomidine hydrochloride EV, morphine EV, oral pregabalin and oral baclophen. Since there was no improvement, it was tried a sphenopalatine ganglion transmucosal block but this attempt was unsuccessful as well. Reaching three months of the pain’s onset, he was admitted to the hospital because of failing to control the pain. After a multidisciplinary discussion round with the oncology and pain medicine teams, it was decided to conduct a combined approach: an ablation of the second and third branches of the trigeminal nerve and afterwards a nasoendoscopic infiltration of the sphenopalatine ganglion with 2ml of ropivacain 0.2% and 4mg of dexamethasone. His previously 10 graded (visual analog scale) facial pain, was no longer present immediately after the surgery and he no longer needed any opioids (Figures 1 & 2). 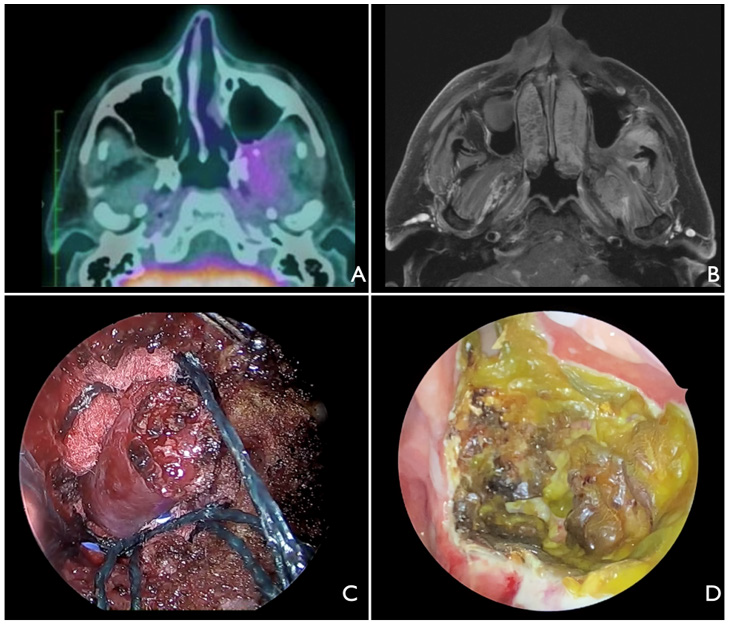 C. Interoperative endoscopic view of the left tumor with a 30 degree endoscope.

A. Intraoperative CT showing the ablation needle positioned in V2.

B. Intraoperative CT revealing the ablation needle positioned in V3.

Pain management in oncologic patients is certainly a demanding challenge. These patients usually undergo radiotherapy, which can lead to actinic trigeminal neuralgia, because of inflammation of neural tissue, as presented by this patient. This pain can occur not only after radiotherapy, but because of the infiltrative processes of the tumor itself as well. Because of the path that the fifth cranial nerve does, the etiology is likely related to the topography an ENT surgeon would assess, like the V2 and V3 branches in the infra temporal fossa or maybe deeper in the cerebellopontine angle, as a reported case of a trigeminal neuralgia secondary to a clival osteoma compressing the Meckel’s cave. There are countless ways of treating this entity, nevertheless, after clinical failure they can be quite invasive. They are divided into destructive and nondestructive surgical approaches. The first one includes posterior fossa surgeries, trigeminal ganglion surgeries, peripheral nerve rhizotomy, percutaneous glycerol injection and cryotherapy. The latter has two options: microvascular decompression (preferred treatment when well indicated - with an identified vascular loop) and percutaneous needle-ballon micro compression. When referring to non-destructive surgical approaches, there are two reports of minimally invasive procedures performed - both of them endoscopic transoral. In one of them, the trigeminal nerve was completely transected and in the other one it was ablated. Here, we present an option to this non-destructive surgical approaches: an external radio frequency ablation of V2 and V3 and right afterwards an anesthetic infiltration of the sphenopalatine ganglion localized in the IFT. Both procedures shall be performed under general anesthesia [1-5].

Combined approach of external V2 and V3 ablation and nasoendoscopic anesthetic infiltration showed being an effective and precise method of approaching the trigeminal branches for pain control, independent of its cause. It’s an interesting option to be performed in cases of recurrent trigeminal neuralgia. It’s essential to keep in mind the possibility of actinic neuralgia in postradiotherapy patients and multidisciplinary treatment is crucial to offer patients more treatment options.