Purpose: The main objective of this study was to examine the effectiveness of the allograft bone dowels “Allobone” on knee stability and potentially arising long-term complications.

Method: Ninety-four patients who underwent multiple-stage revision ACL reconstruction using the Allobone dowels for femoral bony deficiency between 2015 and 2021 were included in this analysis. Complications, range of motion, the Lachman test, and the pivot-shift test were used for assessment. Follow-up was carried out at 3 months, 6 months, and 9 months.

Conclusion: The analysis of patients’ outcomes data shows that reconstruction of ACL lesions using the Supercritical CO2 processed allograft bone dowels “Allobone” resulted in satisfactory graft integration and a good stability of the knee joint with no major complications.

Rupture of the anterior cruciate ligament (ACL) is the most common knee injury requiring surgical repair [1]. Although longterm functional stability and symptom relief can be achieved in most patients following ACL reconstruction, approximately 2% to 10% of patients will eventually require a secondary ACL surgery [2]. The annual number of patients undergoing ACL reconstruction appears to be increasing; therefore, the need for revision surgery is also likely to increase. It is estimated that between 2,900 and 13,000 patients will require a revision ACL reconstruction each year [3]. To date, no standard revision procedure exists for the treatment of revision ACL reconstruction, but it is acknowledged that this procedure is substantially more challenging than primary surgery. Management of previously malpositioned or widened tunnels often requires advanced approaches for managing bony defects [4,5]. Multiple techniques for bone grafting the tunnels in a staged ACL revision procedure have been used, including allograft chips, struts, or autografts from the iliac crest [6,7]. A recently applied technique uses bone dowels, which are individually adjustable allografts provided in different lengths and sizes [8]. The primary advantage of bone dowels is, that they avoid donor site morbidity. Furthermore, they afford sufficient stability for the graft fixation at the second-stage revision [8]. Although increasingly used in surgical interventions, the effectiveness of these bone dowels on patient outcome as well as long-term complications have rarely been investigated. The main objective of this study was to examine the effectiveness of the Supercritical CO2 processed allograft bone dowels on knee stability and potentially arising long-term complications. In this context, patient data before surgery were compared to the 3-, 6-, and 9-months post- surgery data.

After Ethics Committee approval, a retrospective chart review was performed to extract from a clinic database, patients who underwent revision ACL reconstruction between 2015 and 2021 using the allograft bone dowels “Allobone”. Patients were eligible if they met the following inclusion criteria: age greater than 18 years, with a primary and secondary ACL injury, persistent or recurrent instability since reconstruction that limited daily and/or athletic activities, physical examination demonstrating instability with both positive Lachman and positive pivot shift testing, MRI imaging available. Patients were excluded in case of multiple concomitant injuries such as meniscal repair or medial and/or lateral ligament ruptures. Additionally, patients were not included if there was a documented disapproval for data usage. All patient information including demographics, medical history, imaging data, physical examination results, and functional data (mobility, stability) were collected.

The graft material used was the allograft bone dowels Allobone (Figure 1), processed by the Supercritical CO2 technology (BIOBank, 3, rue Georges Charpak – 77127 LIEUSAINT – France). The allografts were prepared from living donor femoral heads treated by the supercritical CO2 process (Supercrit®) through degreasing steps and a gentle chemical oxidation of the residual proteins with preserved bone architecture. The bone dowels were provided in different lengths.

All the surgical procedures were performed bysenior surgeons. For surgery preparation, patients were placed in supine position. A thigh tourniquet was applied to minimize blood flow. To detect possible concomitant lesions, a routine arthroscopy was performed at the beginning. The femoral tunnel or tibial tunnel could be addressed first. Fluid loss was less if the femoral tunnel was prepared first. According to the position of the pre-operative computed tomography scan (CT scan) the femoral tunnel was re-drilled with a wire. After placing the wire, it was sequentially reamed with a cannulated drill. Initially, a 6mm drill was used and continued with a 2mm enlargement until the pre-operative diameter measured at the CT scan was reached. The tunnel was arthroscopically inspected if all sides were composed of spongiotic bone and without sclerosis. Otherwise, the drilling was continued with an increase in 2 mm drill size. Subsequently, the length of the drilled tunnel was measured arthroscopically. If the length of the tunnel outreaches the length of allograft dowel, two dowels were inserted in series. Over the drill wire the allograft was inserted from the antero-medial portal. The top of the dowel was slightly bulleted for better insertion through the portal and into the drilled tunnel. A potential intraarticular overlap of the cortex was resected with a small chisel to avoid impingement. The same technique was used for tibial tunnel filling. (Figures 2 & 3) Preoperative antibiotic prophylaxis was given 30 minutes before surgery.

Figure 2: (A, B and C) Anteroposteral/lateral/Transversal CT, right knee showing defect within the tibial tunnel.

Statistical analyses of data extracted were carried out in IBM SPSS Statistics 26 (SPSS Inc. Chicago, USA). Summary statistics were analyzed as means (standard deviations) for continuous variables and percentages for categorial variables. Wilcoxon test was used to compare the preoperative and follow-up status. Differences with a p-value of <0.05 were considered statistically significant.

Ninety-four patients, 21 females and 73 males, with a mean age of 29.4 ± 8.7 years met the criteria and were analyzed. Demographic details are provided in (Table 1). Causes for primary ACL failure were mainly sport injuries (50% of the cases). Seventyeight patients (83%) underwent two-stage revision and the type of graft used during the reconstruction was mainly semitendinosus tendon (smt) in 45% of the cases. Majority of the patients (92.6%) received greater than 2 dowels during their surgery. Baseline surgical characteristics are presented in (Table 2). No major complications were reported. No signs of dowels degradation were observed at the host bone/graft junction on the CT images. Average postoperative knee flexion and extension significantly improved compared to preoperative (P< 0.0001 and P< 0.021 respectively). Lachman test and pivot-shift test were significantly improved when compared with preoperative status (p < 0.0001), (Table 3). 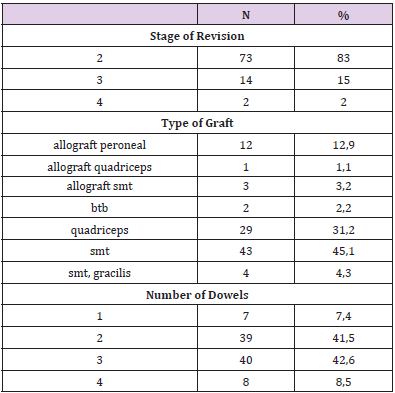 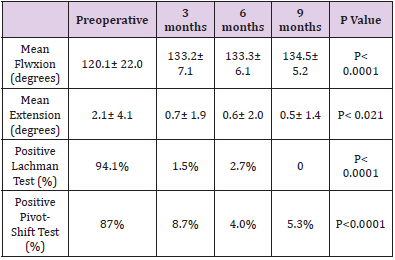 Table 3: Analysis of the results of the active flexion and extension, Lachman test, and pivot-shift before surgery and at 3, 6 and 9 months after surgery.

Revision ACL reconstruction is a challenging procedure due to bone defects caused by material removal, malpositioned primary reconstruction tunnels, or tunnel widening. Bone tunnel widening estimated to occur in greater than 30% of the ACL reconstruction, can result in insufficient stability and fixation during revision surgery [5,9].Several techniques for grafting the bone tunnels in a staged ACL revision procedure have been used, including synthetic bone graft substitute plug, allograft chips, struts, or iliac crest autograft bone dowels [6,7].Because of their osteoinductive, osteoconductive, and osteogenic properties, autogenous grafts are considered the gold standard for tunnel-grafting [10]. Harvesting iliac crest autograft, on the other hand, is an invasive procedure which may result in donor site morbidity [11]. Allografts have been shown to be a reliable alternative to the autogenous graft with good clinical and radiographic results [8,12]. However, the use of bone allograft may be associated with some risks such as: viral transmission of hepatitis or human immunodeficiency virus, slower integration rate than autograft, alteration of structural and mechanical properties due to sterilization methods.

The bone allograft dowels used in this study were derived entirely from living donors’ femoral heads, which were collected after hip replacement surgery and processed using supercritical CO2 extraction technology. Supercritical fluid extraction is widely used in the pharmaceutical and food industries for the splitting, extraction, and decontamination of organic materials. The Supercrit® process combines a degreasing step with supercritical CO2 and a gentle chemical oxidation of the bone network’s residual proteins. Preclinical studies have shown that this process applied to bone has neutral effects on the bone tissue composition, preserves its architecture and mechanical properties, particularly its high wettability, and thus improves performance [13-16]. This study showed favorable healing of the allograft bone dowels on CT imaging, with good final outcomes in terms of stability of ACL graft, comparable with published literature [8,12]. No dowel degradation nor major complications were noted, despite allograft related risks.

Although further research is necessary, this retrospective data analysis showed that reconstruction of ACL lesions using the supercritical CO2 processed bone allograft dowels resulted in satisfactory graft integration and a good stability of the knee joint with no major complications.

Purpose: The main objective of this study was to examine the effectiveness of the allograft bone dowels “Allobone” on knee stability and potentially arising long-term complications.

Method: Ninety-four patients who underwent multiple-stage revision ACL reconstruction using the Allobone dowels for femoral bony deficiency between 2015 and 2021 were included in this analysis. Complications, range of motion, the Lachman test, and the pivot-shift test were used for assessment. Follow-up was carried out at 3 months, 6 months, and 9 months.

Conclusion: The analysis of patients’ outcomes data shows that reconstruction of ACL lesions using the Supercritical CO2 processed allograft bone dowels “Allobone” resulted in satisfactory graft integration and a good stability of the knee joint with no major complications.